There have been a lot of Undertaker interviews over the last two months as he promotes “The Last Ride” documentary on WWE Network, which has the fifth and final chapter coming up this Sunday. Believe me, I’ve listened to most of the interviews that cover a lot of the same topics and I’ve shared plenty of them in posts on our fine website right however. However, this time I wanted to share some comments from Undertaker from an interview he did with CombicBook.com covering some things that I haven’t heard him talk about before. Thanks to ComicBook.com for the audio interview and writing out the text as well.

I think it’s fair to say that most WWE fans always wanted to see The Undertaker face Sting in a WWE wrong. When Sting finally got to WWE in late 2014, that led to wrestling Triple H at WrestleMania 31 in 2015, a couple of quick matches on Raw and then the Seth Rollins match at Night of Champions 2015 that was Sting’s last match due to a spinal injury. Was The Undertaker ever supposed to face Sting in WWE? Here’s how Undertaker explained it.

“Not to my knowledge. I know the temperature got turned up on that I don’t remember which Mania it was, but Sting and I were on the same flight after a Mania. It was well after 27, but anyway we were standing in line together talking and someone obviously in this day and age, everybody has a camera and someone snapped a picture as we were just having a casual conversation. … No one ever approached me with any serious like, “Hey, what do you think about Sting at this?” or it’s never been presented to me other than by our fans.”

That post-WrestleMania flight would have been after WrestleMania 31 in 2015. This picture was a very big deal at the time. You can see it below. 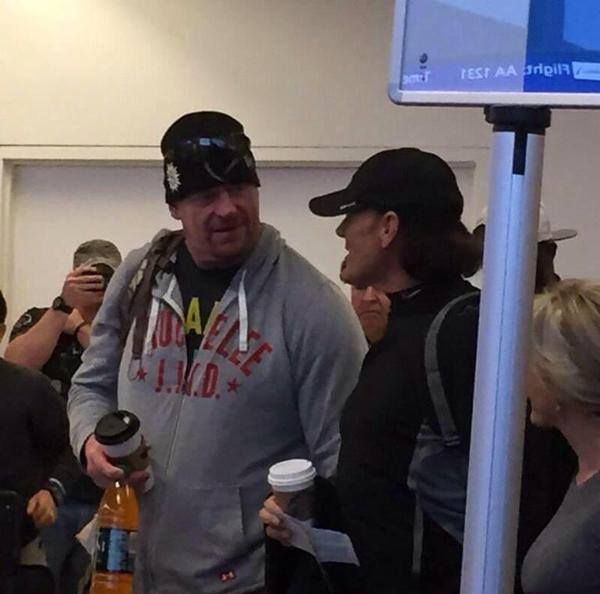 The Undertaker also explained why he felt like a match with Sting is unlikely now, but he thinks it could have delivered ten years ago.

“Well, in this world, you never say never, but I think as great as it sounds on paper… And it does, I mean obviously that is a super marquee match, right? But where I kind of differ from a lot of people is I look past the marquee value and I look on the ability to deliver. So like you said, there’s so many people that are clamoring for that match that I just don’t know that the match could deliver on the people’s expectations.”

“That’s a great match, but 10 years ago I think it could still happen and it could still be a stellar match. I’m just not sure at this point that it could deliver on the hype.”

The Last Ride documentary has covered the last three years of The Undertaker’s career. Taker was asked what he has thought about the documentary so far.

“I’m very happy so far with everything that’s [aired]. All the other episodes, I think we’ve really been able to get into my mindset of where I was at particular moments in the last three years, whether good, bad, or indifferent. And then just being and doing most of it away, you get really raw, unguarded answers from me, which obviously everyone knows how well I’ve protected this character and never let anything like this stuff get out. I’ve been really pleased and excited with how it’s come out and the reaction from our audience.”

With regards to John Cena, who Undertaker has only wrestled twice on PPV (Vengeance 2003 and WrestleMania 34 in 2018), Taker was asked why they only had two PPV singles matches and if he thought there was a reason why they didn’t have more PPV matches.

“No, honestly it was just the booking. And that time period when I was still working all the time, we were both babyfaces so you didn’t really want to do that. And then it just came down to at the end there, John wanted to work with me and do something and it was fresh. And like I said, at this point in the career, it’s hard to come up with fresh matches. It’s just difficult because you have to cycle through everybody so many different times, but no there was never really reason why, it was just the way things were booked.”

Looking back on it now, WWE probably should have had a singles feud between Cena and Undertaker during Cena’s main event run. They did have some tag team matches together, at least. One of the main reasons for being apart is Cena was mostly a Raw guy (after 2005) and Undertaker was mostly a Smackdown guy, but WWE certainly could have set it up as a dream match at some point.

The Undertaker was also asked a common question where he had to come up with his Mount Rushmore of wrestling, which means four of the biggest stars ever.

“You got to have [Ric] Flair. You got to have [Hulk] Hogan. Stone Cold [Steve Austin]…. That fourth one’s tough. It could be Harley [Race]. It could be Dusty [Rhodes]. It could be Bruno [Sammartino]. And I base that on contributions to the business. Not so much if they were a great worker or this or that, but… Oh, I know my fourth, it’s Andre [The Giant]. I don’t know why I forgot Andre. So yeah, it would probably be Flair, Hogan, Stone Cold and Andre.”

Lastly, Undertaker also commented on when people say he should be on the Mount Rushmore of wrestling while also expanding on his previous answer.

“Well, obviously I’m flattered and honored and my legacy is what it is and I guess that’s another one of those conversations of who’s better, Jordan or LeBron? In that conversation, I always put Kobe [Bryant] in too so… I’m flattered and obviously I know what my contributions to our industry is, but I think when you look at those four guys and I think they really captivated… I think Flair was the standard and then obviously when WWF took off, it was Hogan that was at the top, and then we had the drop off. And then when it came roaring back, it was Stone Cold. And then Andre is just the 8th Wonder of the World.”

You can listen to Undertaker’s interview with ComicBook below.

The final episode of The Last Ride documentary airs this Sunday on WWE Network.