I remember about a decade ago when I decided to turn my back on WWE. I remember a big part of that reason was John Cena. I remember when I started to dip my toes back into WWE in 2014, leading up to WrestleMania XXX in New Orleans. I remember that I was really buying into Bray Wyatt and I was disgusted that John Cena beat him. I remember feeling glee the next night on Raw with the unanimous vitriol he received from the Raw After WrestleMania crowd. I remember saying when I first started writing for TJR Wrestling that I was tired of Cena being prioritized over younger stars like Seth Rollins. I also remember how much I began to appreciate him during his two month absence following a loss at Hell In A Cell to Alberto Del Rio. His United States Championship run was truly one of the highlights of 2015.

One other thing I remember is two weeks ago when I said I was worried about Cena taking the WWE World Championship from AJ Styles. I said that with the knowledge that John Cena is still the absolute top guy in WWE as well as the knowledge that if they are talking about his 16th title reign, it will eventually happen. One thing I would like to clarify beyond all doubt is the fact that John Cena absolutely deserves that accolade. I don’t want to see it happen just yet, but he has earned it. I know it isn’t about to happen because Cena is going to take some time off to film another season of American Grit, but last night I started to actually get excited for the prospect.

Last night while on commentary for the SmackDown main event between AJ Styles and Dean Ambrose, Cena talked more about reaching Ric Flair’s record. He said that when he started out he wanted to be the best but now, this far into his career, he is so close to actually achieving real greatness. The type of greatness you can’t really plan for when you’re just starting out in any field. It is very rare for anyone in this world to be considered the best at anything during the time they are doing it. It is even more rare to be considered among the greatest to ever do it. No matter what anyone says about Cena, there is no doubt he has been on top for so long, has brought in so much business, and at times has carried the company in a way less than a handful had before him. With what he’s actually done for the company, it is only right that he be given that symbolic gesture to cement the legacy he has created for himself.

As much as we love wrestling and as much as many of us love WWE, how often do we really get to see a truly historic event? I am not talking about a great match or a crazy bump. I’m not talking about a title change or a debut, a return or a retirement. I’m talking about something that will still be routinely talked about a generation or two from now. What Cena will accomplish will be something truly great and I thoroughly enjoy celebrating greatness. It seems our society doesn’t always celebrate greatness. For some reason we enjoy poking holes in greatness and tearing it down. Look no further than athletes such as LeBron James getting criticized while marching into the history books. It took me a while to get on board so I understand some of the complaints about Cena, but I think it’s time to just accept him for what he is.

Cena has been accused of never putting over younger talent, which to a degree is true as he’s almost exclusively won his matches in the recent past. While he has almost exclusively won his matches, he has also helped put a lot of younger talent on the map by virtue of just being on the stage with him, by him being pushed to his limits by a lot of that younger talent. He famously lost clean to Kevin Owens last summer and he lost clean to both AJ Styles and Dean Ambrose in the span of the last month. On top of that, he routinely takes part in one of the most entertaining matches of the night on every show he participates in. What makes this even more impressive is the fact that he is this far into his career, this established and he’s still raising his game along with the new generation that is breaking in. 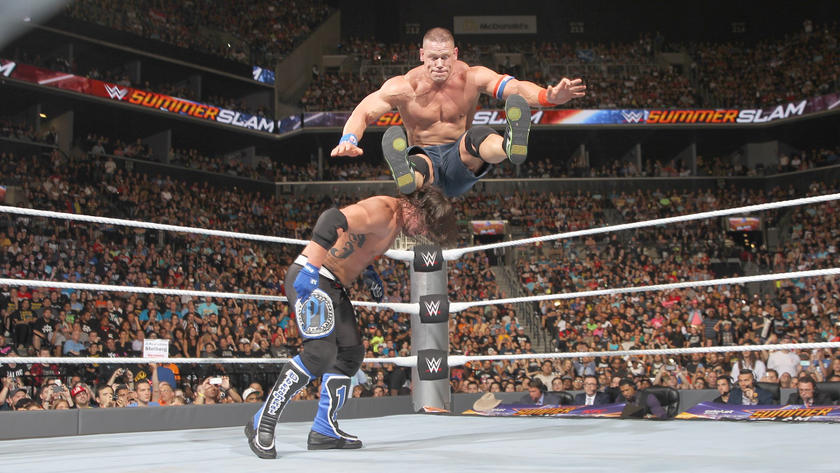 The fact that he still cares so much, that he still puts in such a high level of effort is arguably more important than him losing some of the matches we wished he lost over the last few years. Kevin Owens has clearly recovered from his losses to Cena that followed his shocking win. He probably even learned some things from the time he spent working with Cena. Seth Rollins has said as much, that he looks up to Cena because he wants to be the one to take that spot when he leaves. In addition to what he does in the ring, he also has so much experience and wisdom to pass down to the next generation. While many would prefer to see him leave WWE for Hollywood altogether, him being around in invaluable for everyone else in the company.

The last thing I will get into doesn’t really have to do with what he does in the ring or on the road or in the locker room. It has to do with how he’s increased his profile outside the world of wrestling over the past few years. He’s done big movies, he’s been on widely viewed morning and late night talk shows, he’s hosted a show on Fox, he’s hosted awards shows and done publicity in other countries as well. The storyline on WWE programming is that he is a “lazy part-timer” but he explained on Talking Smack that it couldn’t be further than the truth.

Cena said that he is the first person to do all those things while still fulfilling his obligations with WWE at the same time. He could have been like The Rock and moved on full time to the mainstream, but he hasn’t. He’s gone out into the world to pursue these other projects but is using them to try to bring the world back to WWE with him. Now Cena has gone over two years without holding a World Championship. He put in tremendous work in 2015 to elevate the United States Championship and just recently has done a lot to help elevate AJ Styles and, to a lesser extent, Dean Ambrose.

He is helping to usher in the SmackDown Live era despite taking a back seat to Styles. Whether you like him or not Cena has spent as much or more time on top of the industry as The Rock, Stone Cold Steve Austin, Rick Flair and even Hulk Hogan. He has been a great inspiration to children, both sick and well all over the world. He has cared about WWE more than every other opportunity he’s been presented with. He has earned his place in history. While his time may soon be up and while his time might not exactly be now, John Cena has deserved to take his place alongside Ric Flair as a record-tying 16-time World Champion. Hopefully we will all be on board and prepared to cheer when, not if, it happens.

Ron is a 36-year old sometimes freelance sportswriter from Philadelphia. He has a passion for professional wrestling over any other form of entertainment. He hopes to bring interesting and thought provoking topics to TJR Wrestling on a weekly basis. He loves to interact, learn from his readers and welcomes feedback. Ron is currently hosting the Mat Madness Wrestling Podcast, found on YouTube and iTunes. He can be contacted via Twitter @RonPasceri or at [email protected]