Welcome to the TJRWrestling WWE NXT WarGames preview featuring this year’s event that will have Men’s & Women’s WarGames matches along with three other matches.

It is weird writing about a WWE NXT Peacock/WWE Network event without the Takeover name since we were used to having five or six Takeover events every year since 2014. Now that it’s NXT 2.0, WWE decided to drop the Takeover name and now it’s just an NXT pay-per-view event. The last Takeover was in August with Samoa Joe beating Karrion Kross for the NXT Title. That show also had a Dragunov vs. WALTER match that was one of the best WWE matches of the year.

Prior to the NXT 2.0 launching on September 14, Joe forfeited the NXT Title due to injury (whether he was actually injured, I don’t know) while former champion Karrion Kross was moved to Raw and then released by WWE last month. Now the NXT roster is filled with “rookies” who have debuted this year and some of them only within the last two months. Guys like Bron Breakker, Grayson Waller and Tony D’Angelo only debuted recently and now they are main eventing this WarGames event while Carmelo Hayes is also part of the team after debuting in NXT earlier in the year.

Most of the major champions are in the WarGames matches, so that means only two title matches and it might be the end of the Cruiserweight Title. Let’s get to the preview.

(Note: All graphics are from WWE.) 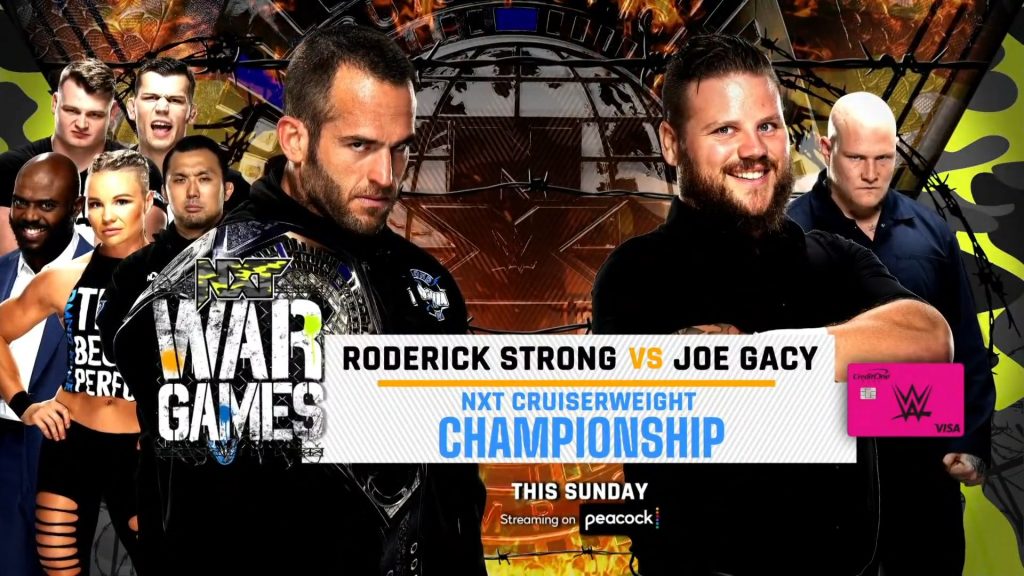 The deal here is that Gacy is well over the 205-pound weight limit, but his gimmick is of a guy that complains about things not being fair, so if Gacy wins they may get rid of the Cruiserweight Title and call it the “All Inclusive Championship.” I think Gacy winning is very possible because WWE has obviously given up on the cruiserweight division. The 205 Live show is basically just an NXT 2.0 show that isn’t about the cruiserweight division anymore. They definitely need a new name for it. Anyway, Gacy has his buddy Harland by his side and we have slowly seen Harland get more physical during segments/matches, so I can see Gacy winning because of Harland getting a cheap shot against Strong, who is also a heel. I’m going with a Gacy win.

Winner AND NEW NXT Cruiserweight Champion (If That Is Still The Title’s Name): Joe Gacy 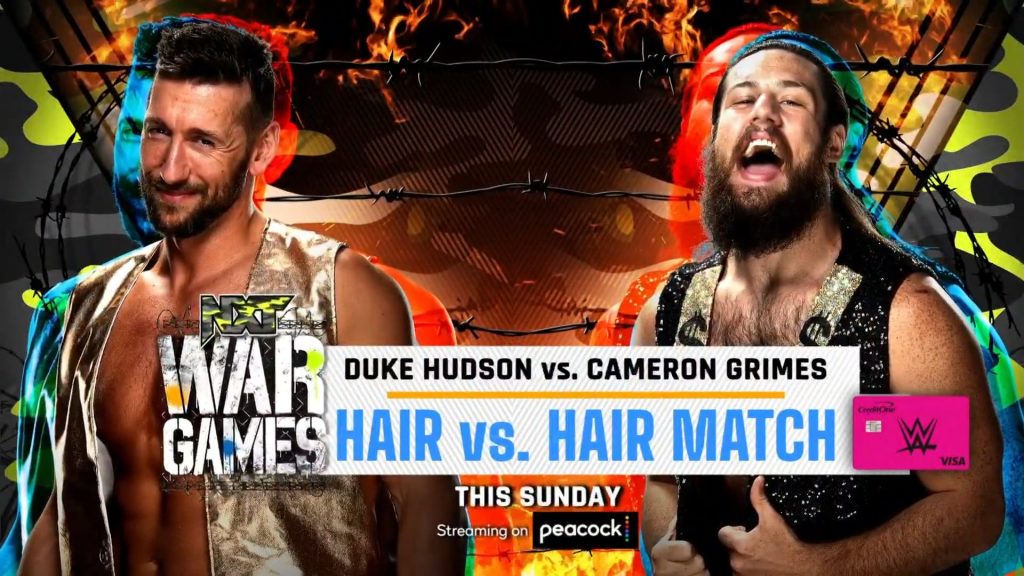 This was set up since Hudson was mad at Grimes for beating him during one poker hand, Grimes bluffing to beat Hudson and Hudson put him through a table. After going through the table, Hudson cut some of Cameron’s hair/beard so that led to this challenge to a Hair vs. Hair match. It’s the biggest match in the career of Hudson, who is a 6’5” inch Australian with a big body that WWE likes. Grimes had a bigger feud earlier in the year with LA Knight that turned Grimes into a face and I liked that rivalry. I think it makes more sense for Grimes to win to get revenge for being put through a table, but it really could go either way. I’ll go with Grimes for the babyface win and Hudson ends up a bald man after this. 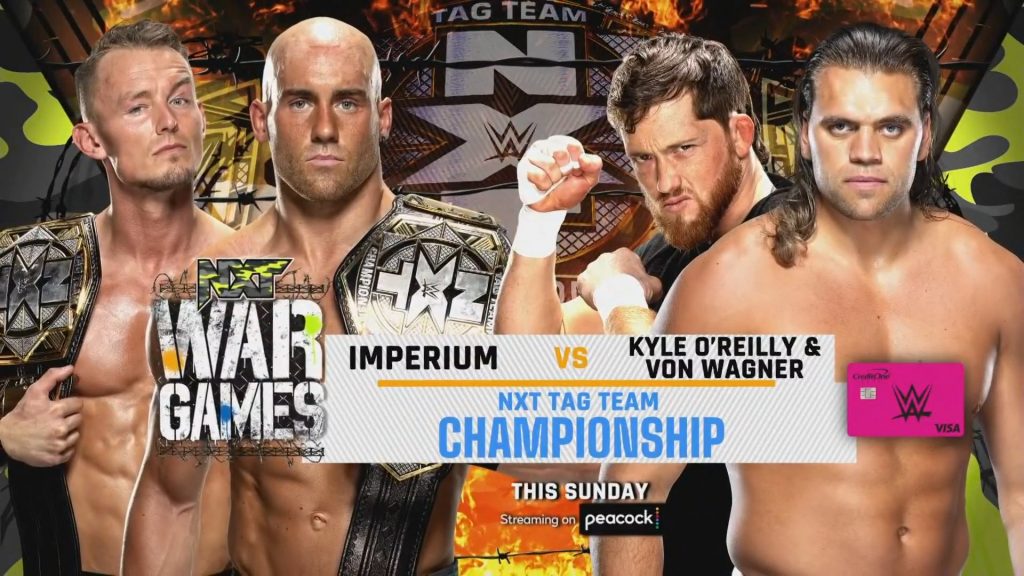 The NXT men’s tag team division is solid, but I wouldn’t say it’s great or anything like that. Imperium recently won the titles while the Kyle/Wagner team was put together to give Kyle an ally while Wagner is another newer NXT wrestler that they are trying to develop. I don’t know if the Kyle/Wagner team will be a long-term thing since there are rumors of Kyle’s contract expiring and maybe this is one of his last major matches in NXT. I think it’s likely going to be a match where the champions retain the NXT Tag Team Titles using their superior tag team work and maybe some heelish tactics to get the win. 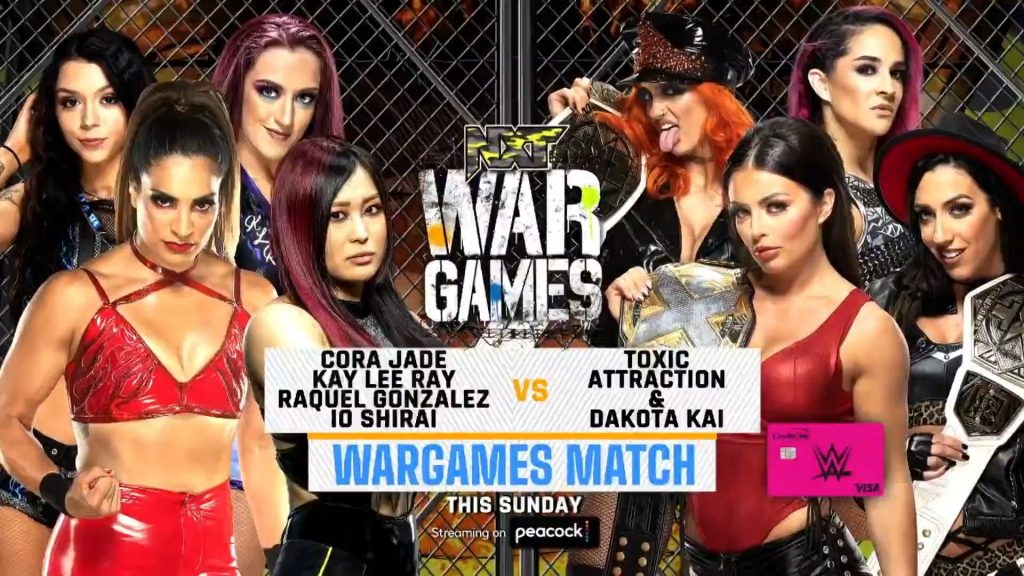 (Note: The Gonzalez-led team has the advantage in the match due to Ray beating Kai on NXT this week.)

The women’s match features the Toxic Attraction trio of NXT Women’s Champion Mandy Rose along with the NXT Women’s Tag Team Champions Gigi Dolin and Jayne. Dakota Kai is kind of a loner right now doing her crazy woman gimmick. The babyface side features two former NXT Women’s Champions Raquel Gonzalez and Io Shirai. It was last year’s WarGames when Raquel beat Io (the champion at the time) to help to establish Raquel as a threat. I can see both Raquel and Io in the Women’s Royal Rumble next month and maybe on the main roster at that point. Cora Jade is the youngest, least established woman in the match at 20 years old while KLR is a great worker that dominated NXT UK. Kay Lee Ray isn’t a traditional face like her partners are, but in this match, she’s positioned on the face team.

This could go either way in terms of predicting winners and losers. My lean is to go with the faces to win since I think it makes sense to have Mandy Rose’s team get beat in order to have the winner on the other side become Mandy’s next challenger. I can see Io Shirai doing some big spot off the cage like she has done in the past (inside a trash can!), so I think this time we might see Shirai do a leap off the top onto an opponent and getting the pin to win the match. Another option is for Raquel Gonzalez to beat her former best friend Kai as payback for all of the times Kai attacked her including when Raquel lost the title to Mandy. If Toxic Attraction and Kai win then that’s certainly fine with me. I just think Raquel or Io winning for the face team makes the most sense. 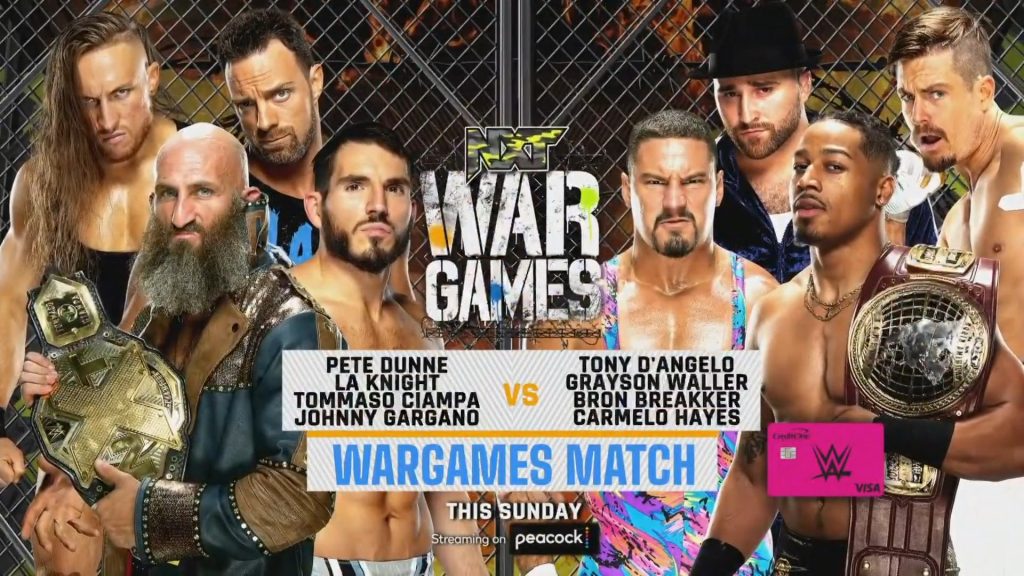 (Note: Team 2.0 has the advantage in the match due to Breakker beating Gargano on NXT this past week.)

The mix of talent in this match is interesting because it’s not about heels vs. faces. Team Black & Gold features guys that have been in NXT for many years like Ciampa, Gargano & Dunne while Knight is less of an NXT veteran, but is an older guy compared to the opponents. Ciampa and Gargano are clearly faces while Dunne and Knight have been heels this year.

The foursome of Hayes, D’Angelo, Breakker & Waller have all debuted in NXT this year with Hayes earlier in the year, Waller was on a few times before 2.0 started while Breakker/D’Angelo literally started when 2.0 began in September. Three of the 2.0 guys are heels with Hayes, D’Angelo and Waller getting booed regularly, but Breakker is more of a babyface that is seen as a future star of the 2.0 brand. To sum it up, I don’t think heel vs. face matters that much in this match. It’s more about the 2.0 guys wanting to prove themselves against the Black & Gold team. I don’t even want to reference age that much because as Dunne pointed out, he’s around the same age as Hayes (Dunne just turned 28 last month while Hayes is 27), but Dunne has been on WWE TV for a lot longer.

Ciampa walks into the match as the NXT Champion while Melo is the NXT North American Champion, so what champion could be beaten in this match? I don’t think either one will lose. I think it’s going to be Bron Breakker continuing his ascent to get the win for his team and he’s probably going to beat Knight, who is the weakest member of his team in terms of star power and push. They probably could have picked somebody better than Knight for that spot although that’s okay because you need somebody to get beaten in the match.

I think we’ll see Hayes pull out some incredibly athletic moves in the match while Waller could hit some big moves because I was impressed by him against Ciampa a few weeks ago. I still haven’t seen enough of D’Angelo while Breakker is obviously a huge star on the rise. Any time you’re in there with guys as good as Ciampa and Gargano especially, you know the match is going to deliver. It may not be Johnny Takeover without the Takeover name, but I still expect Johnny to lead the way with an awesome performance. In the end, I got Team 2.0 getting the win. It just feels right to me.

It’s about a 7 out of 10. I don’t think it will be as good as the best Takeover shows, but I think it will be above average (if you consider five the average). If you follow the NXT 2.0 brand regularly then you’ll probably like it. If you don’t watch regularly or just complain that it’s not the black & gold era of NXT, then you’ll probably find things to bitch about. I say go into it with an open mind and understanding that WWE is trying to develop of these guys that are in their mid to early 20s that haven’t had that much experience wrestling in front of a crowd. We are watching them develop on the developmental brand. I can understand the long-term vision that WWE is trying to use here. Anyway, I think both WarGames matches should be good and maybe even great. They have had time to practice, plan out the big spots and so on. I have faith in them doing well.

I’ll be back with a review of WWE NXT WarGames on TJRWrestling.net on Sunday night.

If you’re out there on Twitter you can message me @johnreport any time. If you want to send an email, send it to me at mrjohncanton@gmail.com as well. Thanks for reading.