Welcome back TJR readers! Did you spend all day Friday trying to figure out why Austin Powers is now a killer and missed Smackdown? Perhaps you spent all day Monday mourning the loss of a great American leader and missed WWE Raw.

Daniel Garcia won the lottery to be signed by AEW this week. It was announced by Tony Khan on Twitter this week that AEW had signed Garcia to a contract. Garcia has been appearing for AEW since September of 2020 and regularly since August of this year. Garcia took to Twitter himself, promising to be a major player for the AEW roster for a very long time. Khan of course now has enough wrestlers for five rosters, so it is unclear which one Garcia will be a player on.

I told myself that I didn’t want to sign somewhere just to say I got a contract. I wanted to go somewhere that would help me become the best wrestler in the world. I know AEW is where I can become that.

I plan on being a major player in this company for a very long time. https://t.co/3yTQPwIRf2

WWE has finally figured out how to fix the slumping ratings of Monday Night Raw; by having a season premiere! This Monday will be a special season premiere episode of Raw. Now of course Raw never actually takes time off, completely negating the need for a season premiere. Also Raw actually debuted in January, making this Monday no where near the beginning of the season. Despite all of that though this will be an incredible 30th season of Raw, which has been on the air for almost 29 years. That first Raw on January 11, 1993 is not only famous for being the first, but also for being the only Raw not to feature a rematch. 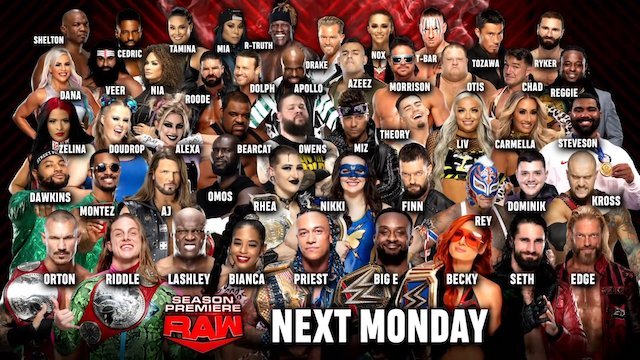 FTR will have to be making a lot more trips to Mexico soon. This past Saturday on AEW Dynamite, The Lucha Bros defended the AAA Tag Team Titles against a mystery masked team brought out by Andrade El Idolo. The mystery masked team were dressed in green, and went by Las Super Ranas. During the match the Lucha Bros were able to unmask Las Super Ranas, revealing them to be FTR. The match then continued with Dax Harwood hitting Rey Fenix with the AAA Title and geting the win. AEW has a long history of using other federations titles on their show, with them using titles from NWA, Impact Wrestling, NJPW and even an old ECW Championship that no one cared about twenty years ago.

A new number one contender for the AEW World Championship is set to be decided at Full Gear. Tonight on Rampage, a World Title Eliminator Tournament is set to begin. Eight men will compete in the tournament with the finals taking place at Full Gear on November 13th. On the left side of the bracket, Dark Order’s 10 will face Jon Moxley and Orange Cassidy will face Powerhouse Hobbs. On the right side of the bracket, it will be Dustin Rhodes facing Bryan Danielson and Lance Archer facing Eddie Kingston. AEW will also announce the bracket for the TBS Title tournament tonight and is also still planning on holding an Owen Hart Memorial tournament, confirming that Tony Khan is clearly planning to start a tournament faction. (TJRWrestling)

AEW won the key demo in the Friday night YouTube/30 Minutes on Cable War. This past Friday, a 30 minute overrun of Smackdown went head to head with the first 30 minutes of Rampage. Both Smackdown and Rampage went commercial-free for those 30 minutes, and AEW ran an hour-long YouTube special before trying to steal an audience from Smackdown. At the end of the 30 minutes, WWE ended up getting more viewers overall, but AEW ended up winning the key 18-49 demo. This seemingly small victory was met with vast excitement by Tony Khan, who acted like his father had bought him a Bray Wyatt for Christmas.

Look out Edge and Seth Rollins, you may have some competition for the Feud of the Year Johnny Award. This week, both Tony Khan and Eric Bischoff had a war of words over social media this week. The war began with Bischoff being critical on his podcast of Khan trash-talking the WWE, advising Khan that he should “shut up and wrestle.” Khan responded to this by criticizing how Bischoff handled young talent in WCW and stating that Ted Turner knew 1% of what he does about professional wrestling. Bischoff then continued the feud by calling Khan ignorant and stating he is nowhere close to where WCW was in 1996. So far it appears that more people are agreeing with Bischoff, but Khan is winning the 18-49 demo. (TJRWrestling)

Sometimes the truth is hard to hear.

Get yours today at https://t.co/lyK2fd5ute

4. Both Charlotte and Becky Lynch Retain Their Titles

Becky Lynch and Charlotte Flair defended their Women’s Championships this week. This past Monday on Raw, Charlotte faced off with Bianca Belair. Charlotte ended up getting herself disqualified in the match, therefore retaining the Raw Women’s Championship. Also this past Thursday at Crown Jewel, Becky Lynch defeated both Bianca Belair and Sasha Banks to retain her Smackdown Women’s Championship. What makes this more interesting, is that starting this week Charlotte will be on the Smackdown roster and Lynch will join the Raw Roster. A similar thing happened last year with The New Day and The Street Profits, with the two teams eventually just trading the Tag Team Titles with each other. We will have to see if WWE will do something more creative to solve the issue this year, or if they are just happy that they can give Charlotte another title reign without her even wrestling a match. (TJRWrestling)

NXT is planning on celebrating Halloween a little early this year. This Tuesday on NXT 2.0 will be a special Halloween Havoc edition. Four title matches are set to take place including MSK defending the NXT World Tag Team Championships against Imperium in a Spin the Wheel, Make the Deal Match. Also in a Spin the Wheel, Make the Deal Match, Raquel Gonzalez will defend the NXT Women’s Championship against Mandy Rose. Io Shirai and Zoey Stark will defend the NXT Women’s Tag Team Championships against Gigi Dolin and Jacy Jayne as well as Indi Hartwell and Persia Pirotta in a Stairway to Hell Ladder Match. Finally, Bron Breakker will try to continue his momentum when he challenges Tommaso Ciampa for the NXT World Championship. Along with the title matches, two huge appearances are scheduled. Solo Sokia, who is the son of Rikishi and brother to the Usos, is set to appear. Also, horror icon Chucky, who is the child of Lilly and Hornswoggle, will also be on the show. (TJRWrestling) 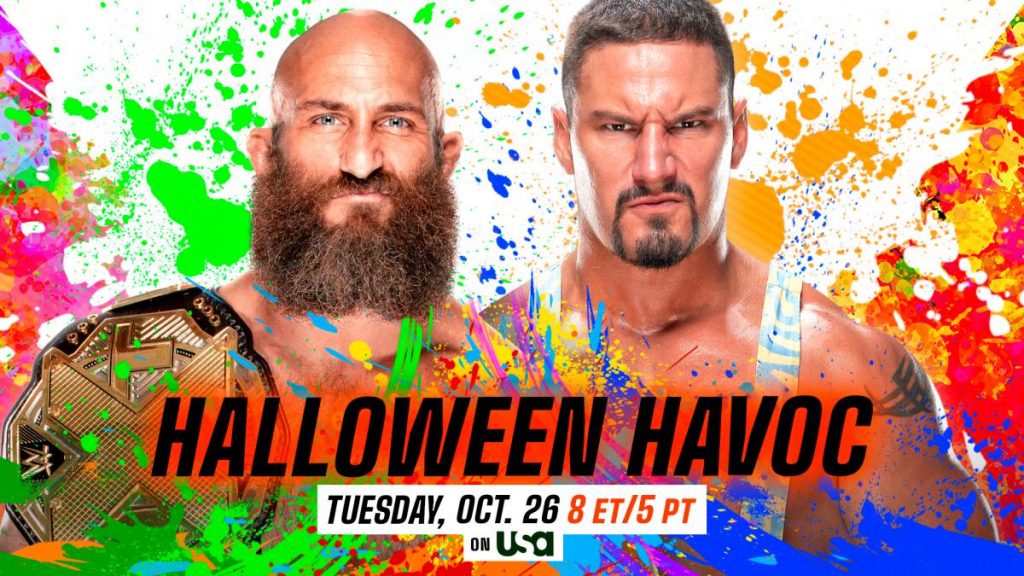 WWE has a new Queen of the ring. Yesterday at Crown Jewel, Zelina Vega defeated Doudrop in almost six minutes to capture the Queen’s Crown. This was a tremendous moment for Vega, as well as women everywhere. Not only did WWE Crown their first official Queen, but they did the entire tournament in ten fewer minutes than the Seth Rollins/Edge Hell in a Cell Match took.

Once again a boyhood dream has come true in the WWE. Yesterday at Crown Jewel, Xavier Woods was able to defeat Finn Bálor in an excellent match to capture the King of the Ring. Woods campaigned for months for the return of the King of the Ring, and called the match with Bálor the most important of his career. Incredibly, Woods has held tag team gold in the WWE many times, but has never held a singles title. Hopefully being King will finally lead to the singles push Woods deserves, and this doesn’t end up becoming the crowning achievement of his career. (TJRWrestling)

That will conclude another edition of The Top Ten Wrestling Stories of the Week. Thank you for taking the time to read this each week. Although I often joke, I have recently started working with NYCW and respect more than ever what wrestlers do every week. If you like what I do, despite my jokes being hated by the 18-49 demo, then feel free to listen to my brand new podcast The Smark and the Noob and follow me on Twitter @Fowlerwrestlin1 as well.