Welcome back TJR readers! Did you spend all day Friday hiding out in a nuclear bomb shelter, and missed WWE Smackdown? Perhaps you spent all day Monday getting your 76-year-old body ready for a wrestling match, and missed Raw.

10. Johnny Knoxville Challenges Sami Zayn to a Match at WrestleMania

For any wrestling fans out there who were thinking that one celebrity match at WrestleMania 38 just isn’t enough, boy do I have news for you! This past Friday on Smackdown, Sami Zayn held an Intercontinental Championship celebration inside the ring. During the celebration, Zayn claimed that he was a fighting champion, who would defend the title from all comers. This prompted Jackass star Johnny Knoxville to come to the ring, and formally challenge Zayn to a match. Zayn did not accept the challenge however, instead, he attacked Knoxville and hit him with two Helluva Kicks. Knoxville vs. Zayn is reportedly scheduled to take place at WrestleMania 38, with Knoxville challenging for the Intercontinental Championship. Knoxville, at 50 years old, will reportedly be only the third oldest competitor scheduled to compete on the card, even though this WrestleMania is surprising not taking place in Saudi Arabia. (TJRWrestling) 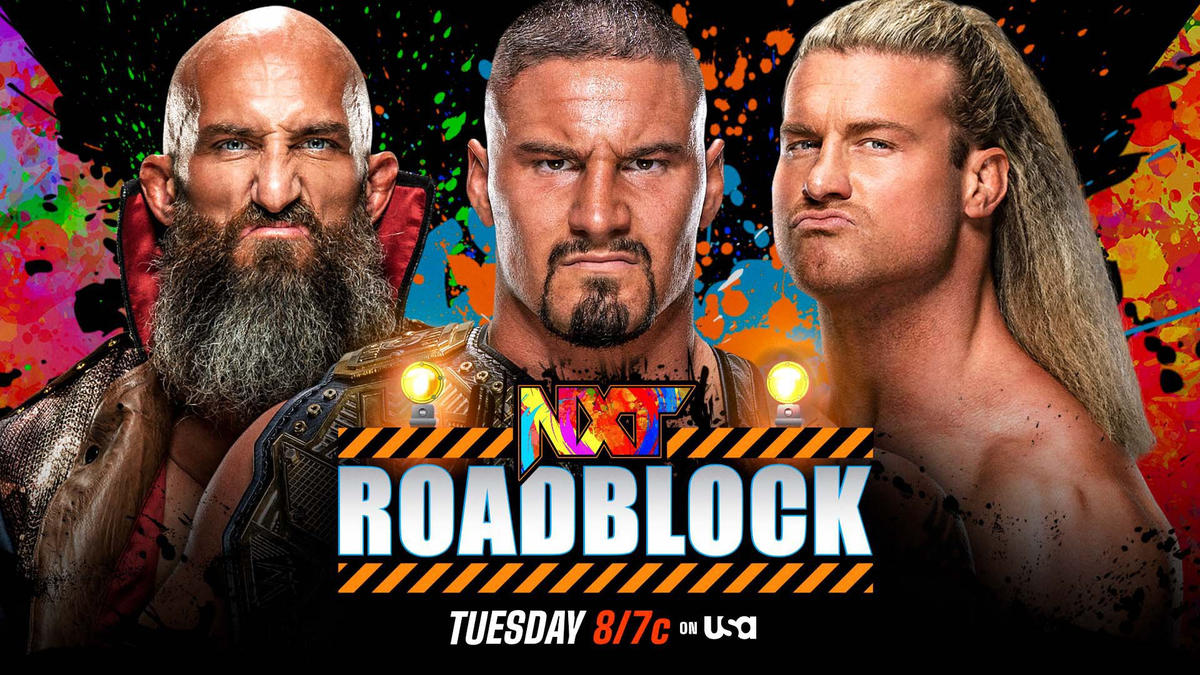 Vince McMahon is reportedly planning to prove that age truly is just a number. This week it was reported that McMahon is planning to wrestle at WrestleMania 38 against Pat McAfee. McMahon appeared on the Pat McAfee Show on Thursday, and offered McAfee a chance to wrestle at WrestleMania 38. McAfee accepted the match, with McMahon telling him he would find him a suitable opponent. It is unknown how much if at all McMahon’s protege Austin Theory will be involved in the match as well. It is undoubtedly hard to believe that McMahon at 76 years old could possibly compete inside a wrestling ring, especially considering that I have trouble putting my shoes on at 40. (TJRWrestling)

THAT WOULD BE A DREAM#PMSLive#WrestleManiapic.twitter.com/3ufJl11Gv0

Finn Bálor decided this week, that he did not want to wait until WrestleMania to capture gold. This past Monday on Raw, Bálor defeated Damien Priest to become the WWE United States Champion. After the match, Priest gave a promo claiming the fans never supported him, before suddenly attacking Bálor. Priest then threw Bálor outside of the ring and proceeded to give him a Razor’s Edge onto the commentary table. It is unknown at this time if Bálor and Priest will have a rematch at WrestleMania 38, as WWE has to wait and see how many more part-timers and celebrities agree to be on the show. (TJRWrestling)

6. Vince McMahon to Induct The Undertaker Into the WWE Hall of Fame

"I'm gonna have the distinction of inducting The Undertaker into the Hall of Fame" ~@VinceMcMahon#PMSLivepic.twitter.com/qbC6XBEGjb

It is safe to say that WWE will not be trying to get Cain Velasquez to make a celebrity appearance at WrestleMania 38. This past Monday, Velasquez was charged with attempted murder. Velasquez allegedly shot another man near San Jose, California Monday night, causing the man to go to the hospital with non-life-threatening injuries. It was later reported that Velasquez chased a man who was accused of abusing his relative, and ended up shooting the man’s father. WWE’s (and former UFC Champion) Ronda Rousey tweeted support for Velasquez as well. Velasquez is a two-time former UFC Champion, and also worked for WWE briefly in 2019. Velasquez memorably lost his debut match in WWE to Brock Lesnar at Crown Jewel in Saudi Arabia. Velasquez would end up getting injured in that bout, and would only wrestle one more time for WWE before being released in 2020. In related news, since being arrested, Velasquez has decided to change his pro wrestling trainer to WWE Hall of Famer Sunny. (ITRWrestling)

The main event of WrestleMania 38 got even higher stakes this week. This past Friday, WWE announced that the Title vs. Title match between WWE World Champion Brock Lesnar and Universal Champion Roman Reigns at WrestleMania 38, will now be a unification match. It is unknown which if any of the two title belts WWE may be getting rid of, but Dave Meltzer did report this week that there still will be a champion on each brand. Lesnar and Reigns signed a contract to make the match official this past Friday on Smackdown, with Paul Heyman calling it bigger than WrestleMania matches like Hogan vs. Andre and Rock vs. Austin. Heyman notably did not mention Cole vs. Lawler, likely because he didn’t want to oversell the match too much. 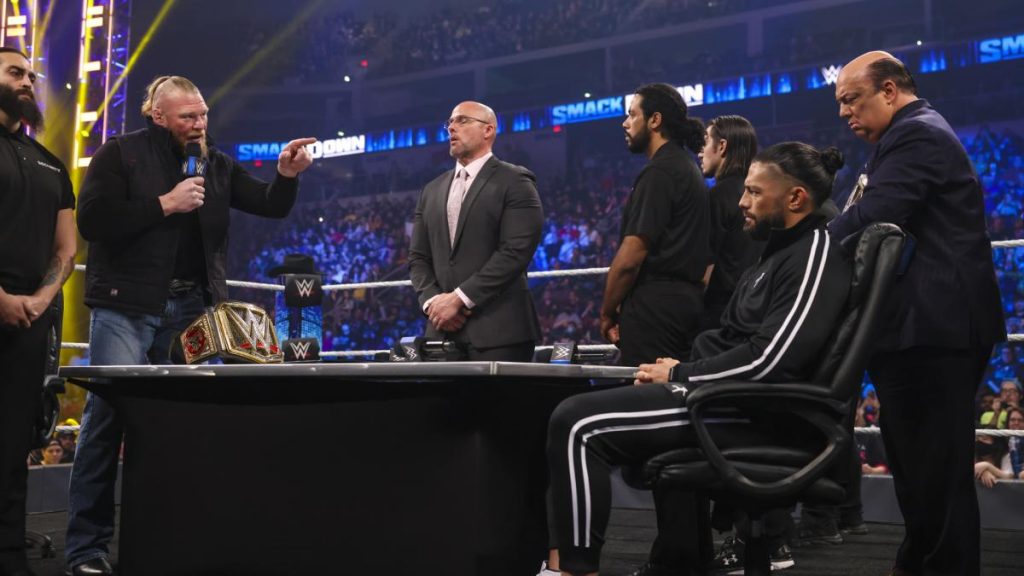 WWE may have just booked their “show stealer” for WrestleMania 38. This past Monday on Raw, AJ Styles answered Edge’s WrestleMania Challenge. Edge then stated that he was glad AJ accepted the challenge, as it was a match that he and the fans have wanted for a long time. Edge then said that he wanted the “bulldog” AJ, not the guy that has been a “tag team bitch” to Omos for the last year. Edge then offered to shake Styles hand, before shockingly sucker punching him instead. Styles then attempted to fight back, before Edge hit him with a low blow. Edge then continued the attack by hitting Styles with two Conchairtos, while the crowd booed Edge, who is back to his heel ways. Edge and Styles will now attempt to have a WrestleMania classic, while in related news, Edge’s former tag partner Christian will be managing a dinosaur on the AEW PPV this weekend. (TJRWrestling)

AEW’s next PPV event titled AEW Revolution will take place this Sunday night at 8pm ET. Wardlow, Keith Lee, Powerhouse Hobbs, Ricky Starks, Orange Cassidy and TBD will all face each other in the Face of the Revolution Ladder Match. Andrade El Idolo, Matt Hardy and Isiah Kassidy will face Sting, Darby Allin and Sammy Guevara in a six-man tag team match. Chris Jericho will go one on one with Eddie Kingston. Bryan Danielson will face Jon Moxley while MJF and CM Punk will try to settle their feud in a Dog Collar Match. Jade Cargill and Tay Conti will clash for the TBS Championship. Jurassic Express will defend the AEW Tag Team Championships against reDRagon and The Young Bucks. Britt Baker will try to defend the AEW Women’s Championship against Thunder Rosa. And finally, it will be the battle of the Adam’s when “Hangman” Adam Page Defends the AEW World Championship against Adam Cole. This should be a great show, that even though will end hours past my bedtime, will still be a can’t miss. (TJRWrestling) 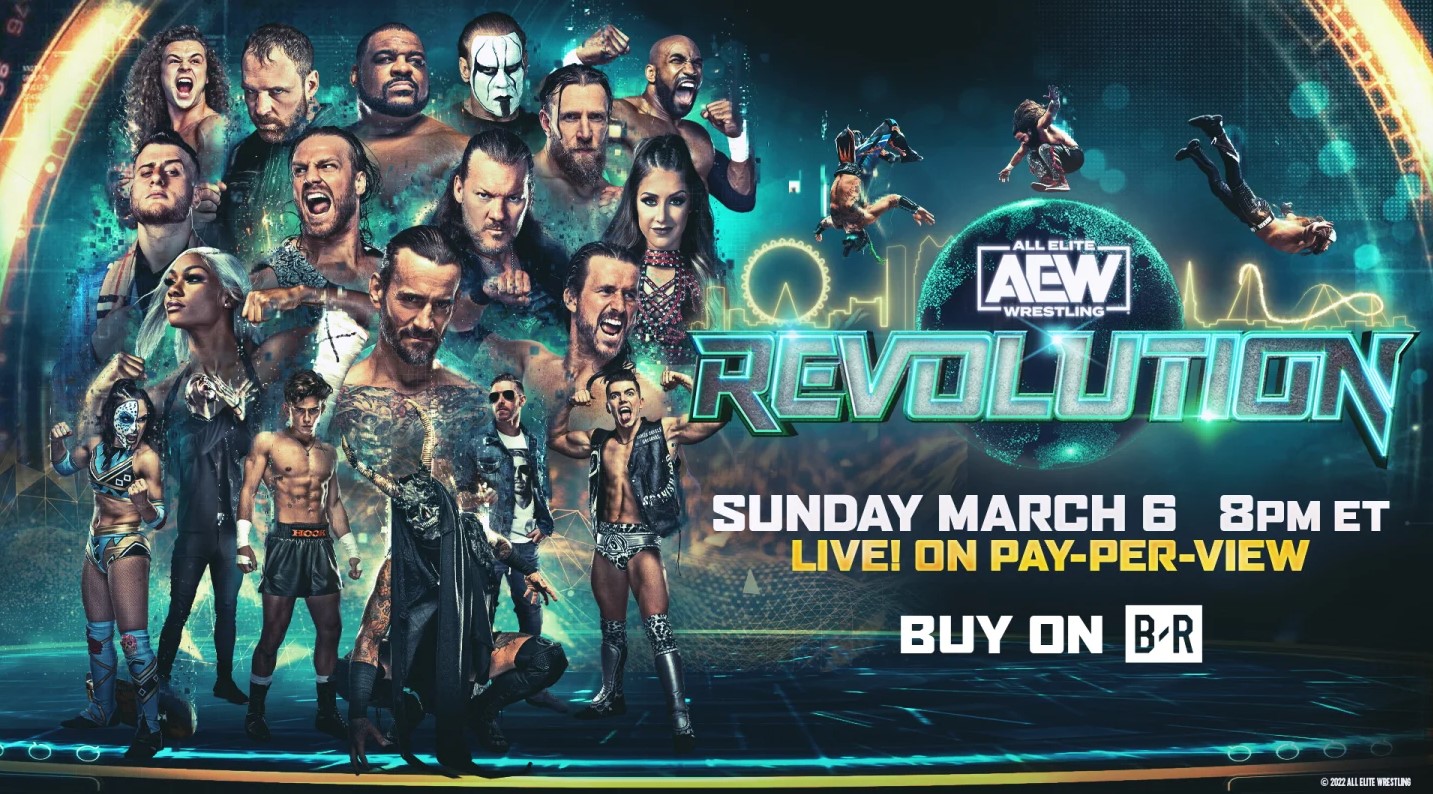 Tony Khan delivered big time this week on his promise of a “huge announcement”. Khan opened up Dynamite on Wednesday and broke the news that he had purchased Ring of Honor. Khan, who reportedly paid upwards of 40 million dollars for ROH, now owns the entire brand including its extensive video library. It is unknown for sure what this means for the future of ROH, but it is rumored that Khan is planning on using ROH as a developmental system of sorts. Forty million dollars is without question a lot of money, with even Shahid Khan telling his son that he can’t ask for anything else for his bday. (TJRWrestling)

That concludes another edition of The Top Ten Wrestling Stories of the Week. Thank you for taking the time to read this each week. Although I often joke, I have recently started refereeing with NYCW and respect more than ever what wrestlers do every week. I wrote an article all about it all right here. If you like what I do, despite my jokes being almost bad as a mid-carder’s spot at WrestleMania, then follow me on Twitter @Fowlerwrestlin1.