Welcome back, TJR readers! Did you spend all day Friday shopping for a referee shirt, and miss WWE Smackdown? Perhaps you spent all day Monday trying to figure out how to keep your geriatric opponent alive, and missed Raw.

Worry not for I have returned with another edition of the Top Ten Wrestling Stories of the Week. This was written before WWE’s Friday morning news of Triple H returning as the Head of Talent Relations. Maybe that will make it in next week’s Top 10 stories.

10. Danhausen to Challenge Ricky Starks for the FTW Championship

The FTW Championship may soon become “very evil”. This past Wednesday on Dynamite, FTW champion Ricky Starks successfully defended his title against Cole Karter. After the match, Starks stated that he would keep things going and issued another open challenge right there on the spot to whoever wanted a shot at the FTW Championship. Danhausen then came out to accept the challenge, causing Starks to retract his statement and say the match will happen next week instead. This will be the first title match in AEW for the popular Danhausen, as he must have now officially jumped Cole Karter in the rankings.

A boy was reunited with his dinosaur this week. This week on Dynamite, Christian Cage and Luchasaurus defeated the Varsity Blondes in a tag team match. After the match, Jungle Boy made his surprise return. Jungle Boy proceeded to chase Cage out of the ring, while Luchasaurus shockingly did nothing to stop him. Luchasaurus then stood by Jungle Boy to end the segment. Cage has said some horrendous things about Jungle Boy the last few weeks, including stating that his dead father Luke Perry would be embarrassed by him. Luchasaurus had seemingly turned heel and joined Cage just a few weeks ago, but apparently, that angle is already extinct.

The man once hyped as “the next Brock Lesnar” competed for AEW this week. Parker Boudreaux (Harland in NXT) was introduced by The Trust Busters, Ariya Daivari and Slim J, at the AEW Dark Tapings on July 16th. Boudreaux would then go on to defeat Serpentico in a match. Boudreaux was surprisingly released by WWE this past April, after being featured on NXT 2.0 for six months. It is unknown if Boudreaux has signed a contract with AEW, or if Tony Khan’s father would only pay for a one-off appearance. (TJRWrestling)

6. Kenny Omega, Bryan Danielson and CM Punk Rumored for AEW All Out

AEW may soon be getting three of its biggest stars back. This week it was reported that CM Punk, Bryan Danielson and Kenny Omega are slated to compete at AEW All Out on September 4th. Danielson has been out since May, reportedly due to a concussion. Punk captured the AEW World Championship at Double or Nothing in May, but has not yet defended the title due to breaking his foot a few days later. Jon Moxley has since won the AEW Interim World Championship, with a match between the two champions likely for All Out. As for Omega, he has not competed since losing the AEW World Championship to “Hangman” Adam Page last November, and has reportedly been dealing with a plethora of injuries. Page, Danielson and Omega returning is great news for AEW, as they are running out of former WWE stars to purchase. (TJRWrestling)

5. Jeff Jarrett to Referee The Street Profits Versus The Usos Match at SummerSlam

After several other wrestlers applied for the position, it was announced this week who would be refereeing the WWE Undisputed Tag Team Championship Match between Champions The Usos and The Street Profits at SummerSlam. This past week on Smackdown, WWE Official Adam Pearce announced that WWE Hall of Famer Jeff Jarrett would be the special guest referee for the match at SummerSlam. SummerSlam will be taking place on Saturday, July 30th from Jarrett’s hometown of Nashville, Tennessee. Jarrett was also recently named Senior Vice President of Live Events with WWE this past May. It is unclear if Jarrett will be purchasing his own referee shirt, or if he will just steal Kurt Angle’s. (TJRWrestling)

AEW Dynamite ended in chaotic fashion this week. The main event of the show saw Chris Jericho and Eddie Kingston face each other in a Barbed Wire Everywhere Death Match. As stipulated, Jericho Appreciation Society members Daniel Garcia, Jake Hager, Matt Menard, and Angelo Parker were suspended in a shark cage before the match began. Ruby Soho was put in control of the cage, which was lifted above the ring. After a brutal and bloody match, Tay Conti came down to ringside and attacked Soho. Anna Jay then came down to seemingly stop Conti, but instead attacked Soho as well. After some difficulty, Conti and Jay then lowered and freed the Jericho Appreciation Society. JAS tried to attack Kingston but Ortiz and The Blackpool Combat Club came down to equal the odds. Kingston seemingly was then going to win the match, but Sammy Guevara came down to interfere on Jericho’s behalf. Jericho was then able to hit a Judas Effect to pick up the win. All of this came off as convoluted and clustery to most fans, but at least they didn’t set off any sparklers this time. (TJRWrestling)

3. ROH Death Before Dishonor to Take Place This Saturday

For the second time in history, Tony Khan will be putting on a ROH show. ROH Death Before Dishonor is scheduled to take place this Saturday at 8PM ET. So far, five title matches have been announced, including Wheeler Yuta defending the ROH Pure Rules Championship against Daniel Garcia. Samoa Joe will defend the ROH Television Championship against Jay Lethal. Mercedes Martinez will defend the ROH Women’s Championship against Serena Deeb. FTR and The Briscoes will once again face-off, when FTR defends the ROH Tag Team Championship’s in a Two-Out-of-Three Falls Match. Finally, Claudio Castagnoli will try to finally become a World Champion, when he faces ROH Champion Jonathan Gresham.

With SummerSlam being a little over a week away, more matches were added to the card this week. After weeks of speculation, the match between Logan Paul and The Miz was finally made official. Also for the first time ever Seth Rollins and Riddle will face each other in a one on one match. Finally, Becky Lynch and Bianca Belair will face each other one more time for the WWE Raw Women’s Championship. There were reports this week that some figures backstage “don’t like” the SummerSlam card, perhaps because it is lacking divas from the year 2015. (TJRWrestling)

After months of hype and speculation, we finally know who will be the participants in Ric Flair’s last match. This week it was announced that Flair will be teaming with his Son-in-law Andrade El Idolo (husband of Charlotte Flair, who is expected to be there) to face the team of Jay Lethal and WWE Hall of Famer Jeff Jarrett. The match will be the main event of a packed card that is taking place on July 31st at 6:05PM ET. The match will incredibly feature employees from WWE, AEW and ROH, with the only thing possibly being more impressive is if Flair was wrestling all of his ex-wives instead. (TJRWrestling) 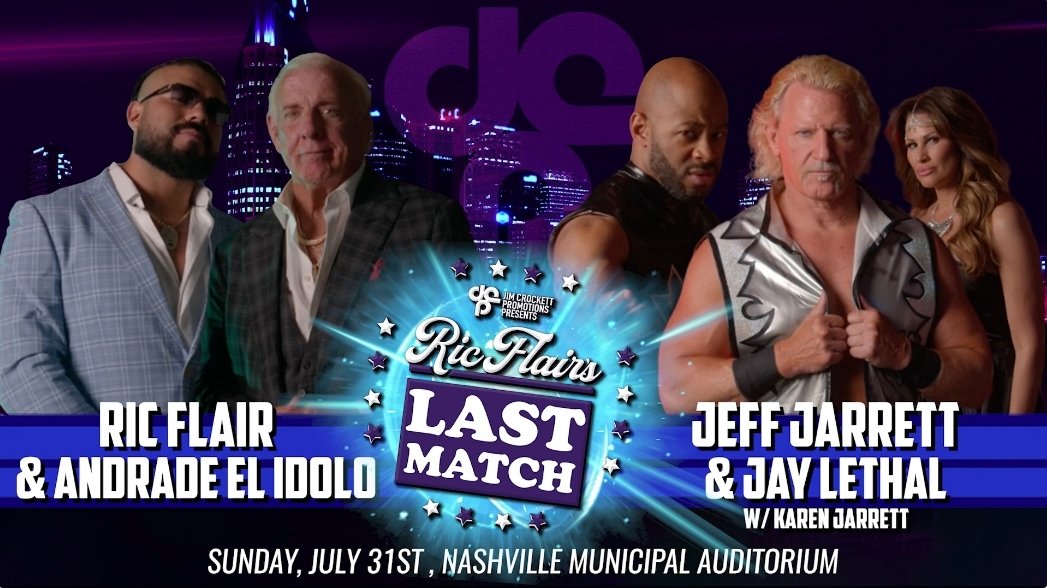 The main event of #FlairsLastMatch will be a contest of skill & professio… oh.

That concludes another edition of The Top Ten Wrestling Stories of the Week. Thank you for taking the time to read this each week. Although I often joke, I have recently started refereeing with NYCW and respect more than ever what wrestlers do every week. I wrote an article all about it all right here. If you like what I do, despite my jokes being almost as bad as Ric Flair’s heart. Then follow me on Twitter @Fowlerwrestlin1.