Welcome back, TJR readers! Did you spend all day Friday taking a nap before watching 20 hours of wrestling over the weekend and missed WWE Smackdown? Perhaps you were picking your EVP out of your teeth on Monday and missed Raw.

WWE is going to have to find a new voice for Friday Night Smackdown for a few months. This week it was announced that Pat McAfee would be taking on a full-time role on ESPN’s College GameDay starting September 10th. Due to this new position, McAfee will be taking a hiatus from the WWE until the end of the year. Both Triple H and McAfee have stated that McAfee will be returning to WWE after that, so probably early 2023 or before the end of this year. It is unclear who will replace McAfee in the broadcast booth, but if they want to go with another former athlete maybe The Goon is available. (TJRWrestling)

SmackDAHN will be on hold for a little bit while I do College GameDay.. I'm still VERY much in the WWE family & will still be doing things with WWE#PMSLivepic.twitter.com/bhSpOYg3wW

AEW once again has an Interim World Champion. This past Sunday at AEW All Out, Toni Storm defeated Dr. Britt Baker, Jamie Hayter and Hikaru Shida to capture the AEW Women’s Interim Championship. Storm will now face AEW Women’s champion Thunder Rosa to unify the titles, once Rosa returns from injury. This of course is subject to change if Storm loses the Interim title before Rosa returns, or decides to take a bite out of her boss. (TJRWrestling) 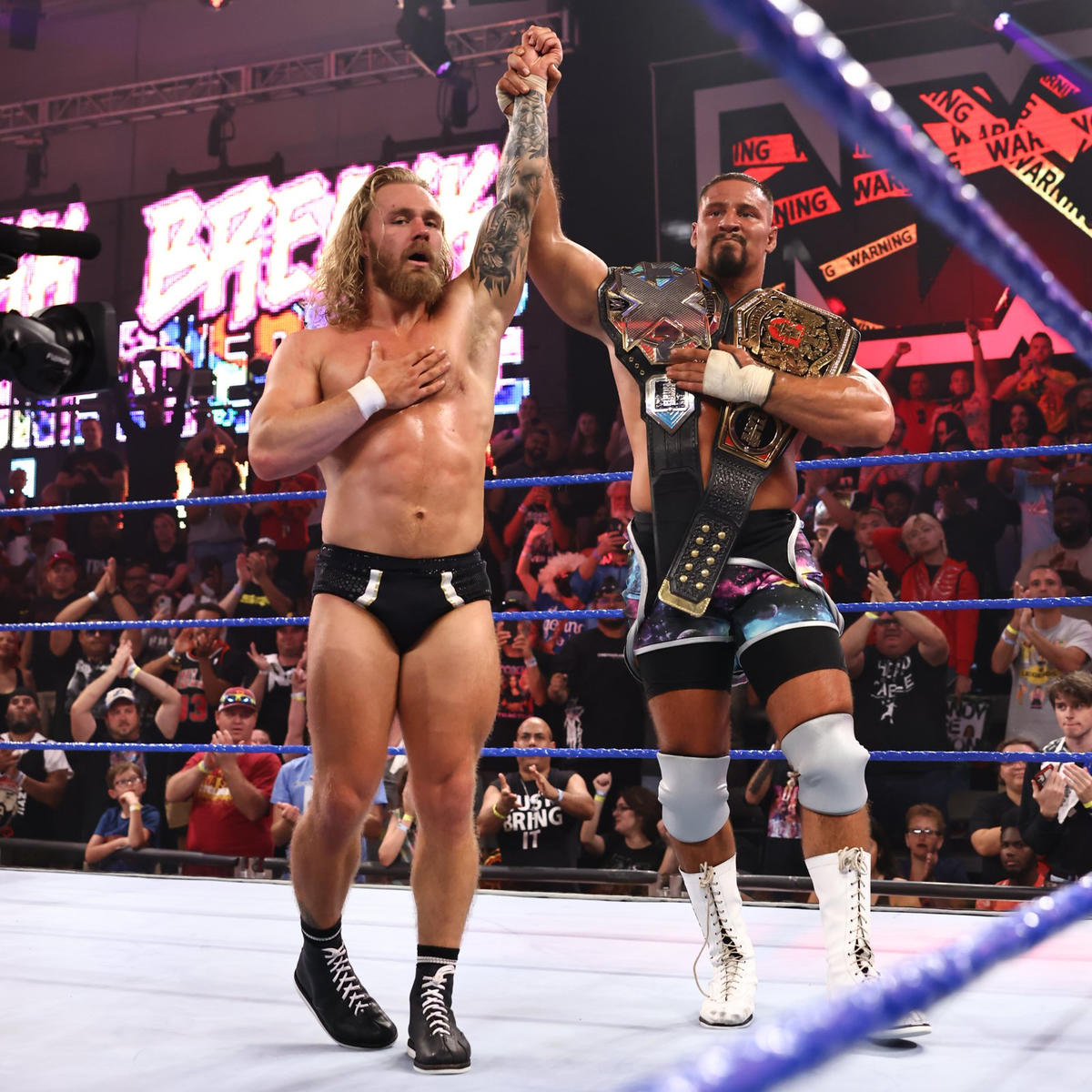 To the surprise of no one, The Elite won the inaugural AEW Trios Championship. Kenny Omega and the Young Bucks defeated “Hangman” Adam Page, Alex Reynolds and John Silver to capture the titles. Unfortunately due to a backstage incident, The Elite were stripped of the titles this past Wednesday on Dynamite. Death Triangle then defeated The Best Friends and Orange Cassidy on Dynamite to become the new champions. This is clearly not how AEW planned the start of their trios division to go. On a positive note, however, AEW has hired a legally blind referee to better officiate the Trios Matches. (TJRWrestling) 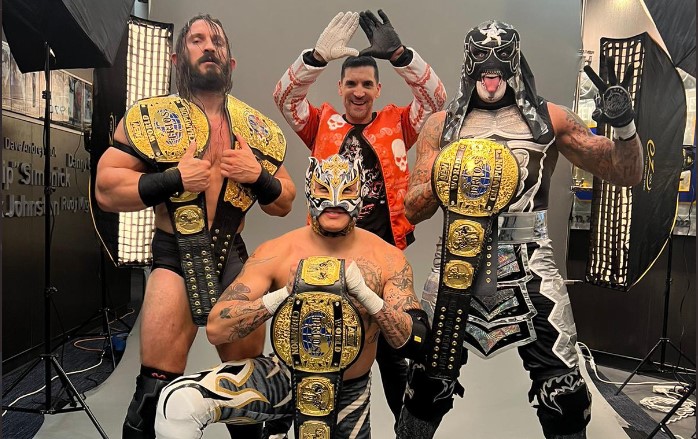 The holidays are going to be interesting at the Mysterio house this year. This past Saturday at Clash at the Castle, Edge and Rey Mysterio defeated Finn Bálor and Damian Priest in a tag team match. After the match however, Dominik Mysterio shockingly attacked Edge and Rey while Bálor and Priest looked on and laughed. Then this past Monday on Raw, Dominik came out with the rest of Judgment Day to interrupt an in-ring promo from Edge and Rey. Dominik and Judgment Day then attacked Rey and Edge, leaving Edge laying in the ring. Dominik was dressed in black with his hair slicked back to both sell the new heel persona and help him convince the cashier that he is legally old enough to buy beer. (TJRWrestling)

AEW will have to do without another of its superstars. This week it was reported that Malaki Black has asked for his release from the company, and was granted it. Black was last seen this past Sunday at All Out, with his House of Black faction losing to Sting, Darby Allen and Miro in a six-man tag team match. Black debuted for AEW in July of 2021, after being released from WWE the month before. It is unknown what will be next for Black, as he considered being a producer for AEW but decided it was not something he could sink his teeth into. (TJRWrestling)

4. Solo Sikoa Debuts on the Main Roster at Clash at the Castle

Roman Reigns is still Universal Champion, thanks to yet another family member. This past Saturday, NXT Superstar Solo Sikoa interfered and assisted Reigns in defeating Drew McIntyre in the main event match at Clash at the Castle. Sikoa debuted in NXT July 2021, and has been out since August of this year with a sprained PCL. Sikoa is the younger brother of The Usos as well as the cousin to Reigns. Sikoa can now help his cousin continue his dominance as well as drive his brothers to the arena. (TJRWrestling)

After three months away, Maxwell Jacob Friedman (MJF) finally returned to AEW this past Sunday at All Out. During the Casino Ladder Match, a group of masked men attacked the rest of the competitors. One of the masked men then proceeded to climb the ladder and retrieve the poker chip, before removing his mask to reveal that it was Stokely Hathaway. Hathaway then handed the chip to another masked man, while the rest of the men revealed themselves to be W. Morrissey, Ethan Page, Austin and Colten Gunn. Later in the evening during CM Punk’s post match celebration, a video package aired showing old clips from Punk’s days in Ring of Honor. The masked men then appeared and revealed himself to be MJF, before coming into the arena to stare down Punk.

MJF would also appear on Dynamite, pretending to be a face to the Buffalo crowd before showing his true colors as a heel once confronted by Jon Moxley. During his promo, MJF made several WWE references including mentioning Cody Rhodes by name and talking about The Game aka Triple H. MJF had not been seen on AEW since verbally berating Tony Khan on the June 1st edition of Dynamite. Interestingly that promo is now being shown by AEW HR as an example of how to better handle issues with your bosses. (TJRWrestling)

After being heavily rumored last week, Braun Strowman officially returned to WWE this past Monday on Raw. Strowman came out during the Fatal 4-Way Number One Contender’s Tag Team Match, attacking Chad Gable to end the match. Strowman then continued his destruction by attacking Gable’s partner Otis, Angel and Humberto of Los Lotharios, Angelo Dawkins of the Street Profits and some security guards. Strowman, who was released from the WWE in June of 2021, looked to be in the best shape of his life. Tony Khan was said to be greatly disappointed that Strowman returned to the WWE, as he could really use some help Controlling the Narrative right now. (TJRWrestling)

CM Punk defeated Jon Moxley to capture the AEW World Championship. That should have been the top story this week, but instead it is just a footnote. Our writing team at TJRWrestling has done a great job of covering the story over the last week as new details continue to emerge. After winning the title, Punk then participated in a media scrum with Tony Khan sitting right next to him. Punk then proceeded to verbally attack Colt Cabana, AEW EVP’s Kenny Omega, The Young Bucks and “Hangman” Adam Page. These comments led to Omega and the Bucks then deciding to go to Punk’s locker room and confront him. Details of what happened next vary, but what is known is that Punk proceeded to punch Matt Jackson. Making matters even worse, Punk’s friend and AEW Producer Ace Steel was also in the room. Steel proceeded to hit Nick Jackson with a chair, as well as bite and pull Omega’s hair. This led to Kenny Omega, Matt and Nick Jackson, Pat Buck, Christopher Daniels, Michael Nakazawa, and Brandon Cutler all being suspended with Omega and the Bucks being stripped of the AEW Trios Titles.

As for Punk and Steel, it is not yet clear what their punishment will be, but Punk was stripped of the AEW World Championship as well. To add injury to insult, CM Punk reportedly also tore his peck in the match with Moxley and is out 6-8 months. A tournament began this past Wednesday on Dynamite to crown a new AEW World Champion, with the finals being held at the AEW Grand Slam on September 22nd. (TJRWrestling) 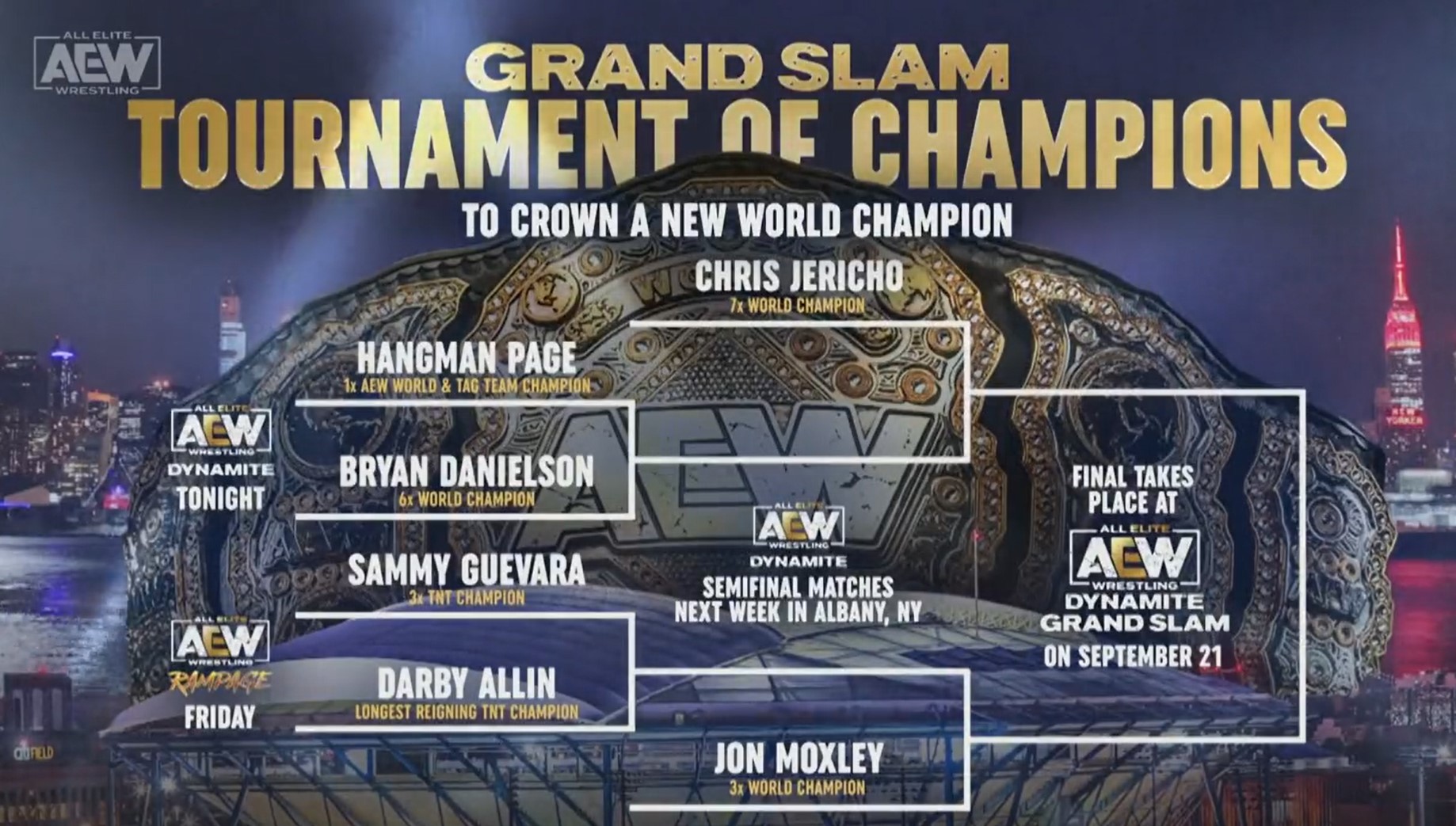 This story has brought a lot of negative attention to AEW this week, with the posts on TJRWrestling about it almost getting as many views as the post about Mandy Rose posing naked with her title belts. While John Canton didn’t make me post this, he probably needs to smile a bit after the first NFL game of the season.

My girls have it covered tonight, while I enjoy a well deserved vacation with my Titles. See you next week at the one year anniversary show! @WWENXT#UNIFIEDCHAMP#Mandyrose#WWENXTpic.twitter.com/L3KD7RFWqr

That concludes another edition of The Top Ten Wrestling Stories of the Week. Thank you for taking the time to read this each week. Although I often joke, I have recently started refereeing with NYCW and respect more than ever what wrestlers do every week. I wrote an article all about it all right here. If you like what I do, despite my jokes being almost as bad as biting your boss. Then follow me on Twitter @Fowlerwrestlin1