Some people watch wrestling for the stories. Some just want to hear two wrestlers talk. And others still prefer the wackiness. But then there are those that want to see violence and mayhem. And for that last group, few wrestlers active today do a better job of showing violence and mayhem than New Japan’s Tomohiro Ishii.

This squat, generic-looking fire hydrant of a man doesn’t really look like a wrestling superstar but damn does he ever know how to put on brutal matches. He has this uncanny ability to make every single strike he does (which is a lot) feel both painful and important But what happens when this HARD-hitting boulder goes up against a guy that simply does not give a f**k? Let’s find out.

This was a story centered on wins and losses in a round-robin tournament. This match took place on the eighth day of the 2018 G1. Ishii had four points, having beaten Toru Yano and Hirooki Goto and having lost to Zack Sabre, Jr. and Tetsuya Naito. Ibushi also had four points, having beaten ZSJ and Juice Robinson and having lost to Toru Yano and SANADA. So both men were at the exact same place in the tournament but only one of them could get points here. Because let’s be real, there was no way Ishii was going to drag out a match to a 30-minute draw. His high-octane, balls-to-the-wall style was so intense and punishing that no mortal man could fight him for half an hour. But could Ishii beat Ibushi, a man being groomed as a possible world champion with no regard for his own safety and who had an even scarier alter-ego that was somehow even more remorseless than “normal” Ibushi?

This match originally took place on July 28th, 2018. It was rated ****3/4 out of five by the Wrestling Observer’s Dave Meltzer.

The bell rings and both wrestlers rush each other immediately. No wasting time here. Neither man budges off simultaneous shoulderblocks. Ishii tanks a boot and Ibushi tanks an elbow. Lots of blocking, ducking and dodging of heavy strikes. Stiff forearm exchange. Ibushi hits an elbow to block a charge but then runs into a brick wall in the form of a tackle. Ishii head-butts Ibushi into a corner and starts taunting him with chops and kicks to the head. Ibushi stands up and hits a forearm but Ishii shrugs it off and asks for more. Ishii punishes Ibushi for his bravery with a nasty corner chop/elbow combo and then shoves his foot into Ibushi’s face. still defiant, Ibushi hits back with elbows and a roundhouse kick, but his hopes get dashed by a nasty elbow from Ishii and he drops to the mat.

Both wrestlers fight out of Backdrop suplex attempts and Ibushi hits a dropkick. Ishii reverses a corner whip and charges but Ibushi dodges and hits a snap hurricanrana. Ishii falls to the floor, allowing Ibushi to hit a plancha to the floor. Then Ibushi does something unexpected. He drags Ishii way out into the stands. It’s hard to see because the venue lighting is pretty bad, but it looks like Ibushi smashes Ishii’s head into the wall near the entranceway. Ishii surprises Ibushi and goes for a powerbomb on the floor. Ibushi counters with another hurricanrana. Ibushi climbs all the way up onto the thin barricade above a staircase near the entrance…and hits a quebrada onto Ishii below. Ibushi simply has no fear.

Ibushi drags Ishii into the ring and hits a springboard dropkick to the back of his head. He follows with a bridging half-and-half suplex for a two-count and then starts kicking Ishii’s chest. Ishii soaks them up and demands more. He sinks down after taking one too many and then Ibushi starts patting Ishii’s head. Ishii stands up staring daggers at Ibushi. Ibushi hits another kick but Ishii drops him with yet another vicious elbow. Ishii follows with his delayed superplex. But Ibushi gets up right away. And he has that empty, dead look on his face. Is it coming? Sensing danger, Ishii capitalizes with a German suplex. But again, Ibushi stands up right way. Yup, MURDER IBUSHI has awakened. 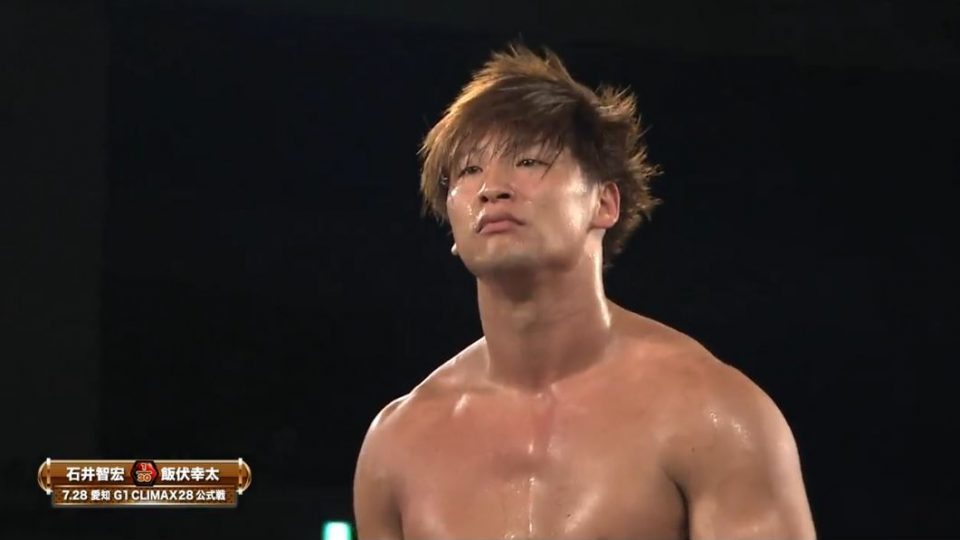 Ishii goes for a dragon suplex but Ibushi lands on his feet. Ibushi charges for lariat but Ishii doesn’t even flinch. Ibushi tanks a head-butt, ducks another lariat, and connects with the dragon suplex. He ducks a spinning lariat and hits a backflip kick. Both men go down.

Ibushi gets up first and Ishii hits him with several one-two elbow smash combos. But they don’t even register with Ibushi and he smacks the S**T out of Ishii in response. Ibushi follows with a lawn dart toss into the turnbuckle pad. That’s a nasty hit for Ishii but Ibushi continues poking the bear with taunts, kicks, and foot taps. Ishii gets up and then the two trade STIFF slaps. Somehow Ibushi wins the exchange and kicks the side of Ishii’s head. His mocking of Ishii continues, even as the referee warns him. But Ibushi continues his recklessness until Ishii fights up and chops him in the throat. Ishii angrily hits the same sort of strikes to the head that Ibushi did monents ago to taunt him. Ibushi stops blocking and fights up. Then he drills Ishii with his own chops to the throat. That’s followed by a huge wind-up lariat and a Last Ride powerbomb. One, two, Ishii kicks out.

Ibushi pulls a kneepad down and goes for his Kamigoye knee strike. Ishii avoids it by hitting first with a head-butt to Ibushi’s midsection and then to his head. Ibushi head-butts back and wraps around Ishii to land a bridging straightjacket German suplex for a two-count. Kamigoye misses. Ishii ducks down, rolls through, and smashes Ibushi with his own finisher. But Ishii doesn’t pin right away because he knows he has to hit everything to keep Ibushi down. Ishii hits a high-angle folding powerbomb but only gets a two-count. LARIATO! Ibushi kicks out again. Ishii goes for a Brainbuster. Ibushi counters into one of his own. But Ishii stands up right away. Ibushi blocks more lariats with kicks to the arm. Ishii lands an enzuigiri. Ibushi fires back with a running knee strike that gets a one-count. Both guys continue hitting each other with full force while standing. Ibushi gains the advantage with kicks thanks to his longer reach. Ishii sinks down after a kick to the head. Ibushi traps both of his arms and wrecks him with the Kamigoye. One, two, three! What a war!

Matches like this one make subscribing to New Japan World totally worth it. This was yet another insane, stiff, and high-impact war that made Ishii into something of an unsung hero in modern wrestling. If you want all action and no filler, comedy, or unnecessary teasing, this is the match for you. Those sixteen minutes just flew by thanks to perfect pacing. Nothing felt out of place or over-the-top. It was a hard-hitting gladiatorial fight to the death mixed with some fun mockery that helped tell the match’s story. Both guys knew they had to really pull the best out of each other to make winning this match meaningful and that’s exactly what they did. This was incredibly fun and very much worth watching, especially since NJWorld has English commentary for it.

Ishii was a one-trick pony here but his one trick never gets old. He hit brutally hard and took an ungodly amount of punishment. He didn’t slow the match down at all: he just kept swinging for the fences until he ran out of gas. He absorbed an incredible amount of damage and fought hard not just to try and win the match but to also make it harder for anyone to see that he was hurt. His approach was “damn this hurts but I won’t let you see me struggle”, which made him come across as twice the badass. And sure, his style was all offense and no defense, but that’s what makes him entertaining. He’s like a runaway freight train that keeps kicking up debris as it charges forward, only stopping once a truly immovable object crosses his path. And interestingly, that object came in the form of Ibushi, who in this match was a two-trick pony. At first Ibushi tried his usual high-flying showmanship and bedazzlement to show off to the fans and get them behind him. But once Ibushi felt the sting of ISHII SMASH, he had to turn around and bring out his sick alter-ego Murder Ibushi.

This was done out of necessity. Ibushi’s high-flying shtick wouldn’t work against a man built like a fridge like Ishii so he had to fight fire with fire which, in this case, meant hitting Ishii as hard as possible. The two wrestlers went back and forth with taunts and mocking strikes to make sure both brought their A-game. And from there it became a game of one-upmanship mixed with a sense of desperation. Both guys needed to hit their biggest moves to win but had to pull teeth just to weaken each other enough to hit said moves.

As a comparison, imagine these two wrestlers are Smash Bros characters and both of them have their shields up while also trying to land any hit possible. Eventually, both of their shields break and it becomes a tense contest of who can hit the highest-damaging move to knock his opponent out. And yet, despite both guys sustaining so much damage, both of them incomprehensively keep surviving and pushing forward. Watching this match you cannot help but ask yourself ‘how are they still going?’ Sure, this is wrestling and it’s as absurd as some of the wildest nonsense you see in video games, TV, and films. And yet, it still has that sense of competition, determination, and above all else, badassery that makes it so compelling.

Meltzer isn’t always right with his ratings (especially since 2017), but he is right once in a while. That was the case here. This match is tremendous and very much worth watching, but I wouldn’t call it a truly flawless match. The crowd brawling bit didn’t lead to much and it was hampered by, of all things, bad lighting. And for all the great action this match produced, the crowd wasn’t as wild as I expected. Compared to that legendary match between Ishii and Shibata from G1 2013, this match almost took place in front of a COVID audience with its relatively subdued cheering and coordinated clapping making up most of the noise.

And yet, this is a badass match. In the future, when fans look back at this era of wrestling (assuming there still are that many dedicated wrestling fans), then it’ll be remembered as the time when Ishii became the undisputed MVP of the G1 Climax tournament for several years.