For the past several years, the only pro-wrestling tournament worth watching has been New Japan’s G1 Climax featuring big name stars like Hiroshi Tanahashi, Kazuchika Okada, Kenny Omega and Kota Ibushi to name a few.

Thanks to great word-of-mouth promotion and constant praise in wrestling newsletters, the G1 has carried this expectation of great matches every year for almost a full decade now.

For the most part, it has succeeded. Throughout this series, I have seen some trulyoutstandingG1 matches that have more than lived up to the hype. At the same time, there have also been some disappointments that, put simply, have not held up well to time. So which of those two categories does this match fall into? Read on to find out.

Today we look back at the 2019 G1 match between Kazuchika Okada and Kota Ibushi.

Both Ibushi and Okada were in the same bracket for the 2019 G1 Climax. Going into this match, Okada had 14 points and Ibushi had 12. If Okada won or tied, he’d advance to the finals. But if Ibushi won, he’d tie Okada and then the judges would determine which wrestler would advance to the finals. There was also another factor here: Okada was the reigning, defending IWGP Heavyweight Champion. If the champion was pinned in the G1, that guaranteed that person a title shot against Okada. This had already happened earlier in the tournament as Okada had been pinned by SANADA and SANADA had his title shot scheduled for the October 2019 King of Pro-Wrestling PPV. If Ibushi managed to pin Okada here, then even if he lost in the G1 finals, he would get a title shot at some point as well.

Thus, it was do or die for Ibushi. He needed a major win here, especially since the whole title picture started getting very messy once the tournament was over. 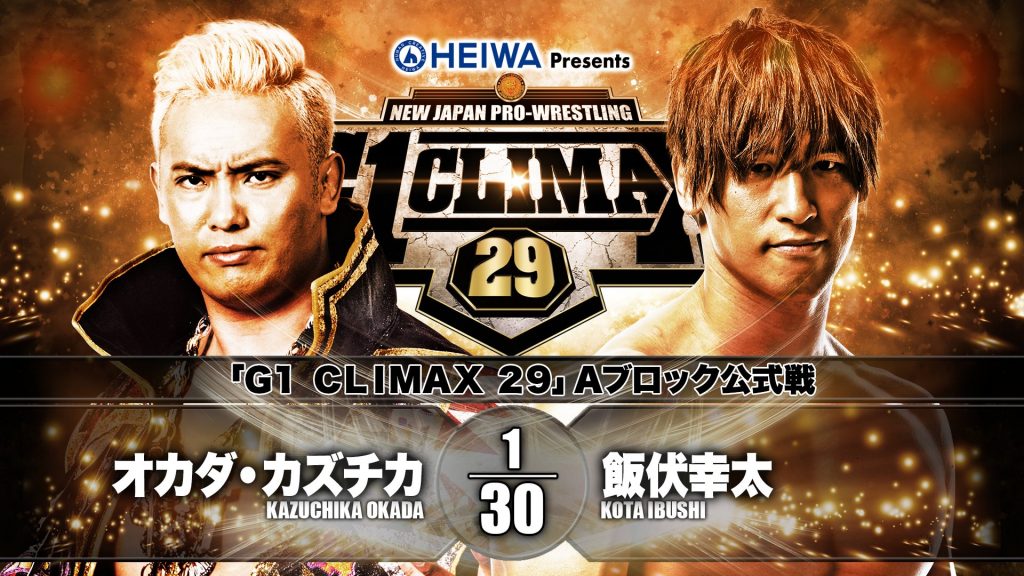 The crowd is much louder than usual and they chant mostly for Okada as the bell rings. They start with some basic chain grappling that ends in a quick one-count for Okada. They lock-up and Okada pats Ibushi mockingly against the ropes and then dares Ibushi to hit him, which Ibushi does. They trade forearms and Okada gets the upper hand. He charges but walks into a dropkick from Ibushi. Ibushi sends Oakda into a corner but Okada blocks a charge and dropkicks Ibushi from the top rope to the floor. Okada uses that chance to recover as the five-minute mark passes.

Okada DDTs Ibushi on the ringside mats but Ibushi gets into the ring at the ref’s count of eleven. He elbows Ibushi’s neck hard and chokes with his foot until Ibushi tries fighting back. I say ‘tries’ because Okada instantly shuts him down and lands a running basement dropkick for two. The fans chant for Ibushi as Okada applies a chinlock. This goes on for a bit until Ibushi elbows out. Okada escapes a corner charge but runs into a snap Frankensteiner. Now Ibushi starts firing up. He lands a martial arts rush and a standing moonsault for two. Okada tries to escape to ringside but that provides no safety. Ibushi flies through the air with a plancha to the floor.

Back in the ring, Ibushi sends Okada into the ropes but Okada ducks and lands a forearm. He follows with a corner splash/DDT combo for another two-count and then goes for a diving elbow drop. But Ibushi gets up so Okada lands on his feet and then lands an uppercut. He charges but gets kicked by Ibushi for his efforts. Ibushi seems to hurt himself with that kick, but it hits Okada’s bicep, which will weaken Okada’s attempts at the Rainmaker lariat. Okada appears unfazed as he trades forearms with Ibushi. Ibushi staggers first but counters a charge with a powerslam. He goes for a follow-up second-rope moonsault but Okada gets his knees up. A flapjack gets Okada a two-count so he goes back to the top rope. But this time Ibushi cuts him off and goes for a top-rope butterfly suplex. Okada cuts him off first and Ibushi lands on the apron. But Ibushi recovers first and lands a springboard top-rope hurricanrana. Awesome move. He pins but only gets two.

Ibushi lands a Batista Bomb but only gets two, so he removes his kneepads to prep his ultimate knee strike finisher. He goes for Kamigoye, Okada ducks and tries a Rainmaker, Ibushi elbows out and attempts a lariat, which Okada blocks and he lands a German suplex. Okada tries another Rainmaker. Ibushi escapes but walks into a perfect standing dropkick. Ibushi escapes a Tombstone and drops Okada with a wheelbarrow piledriver of his own. Both men collapse.

Both men get to their knees and trade forearms. They both stagger once on their feet as the strike exchange continues. Ibushi gets the upper hand. Okada answers with a shotgun dropkick. But Ibushi powers through and drills him with a lariat. The crowd’s overwhelmingly behind Ibushi as he attempts a lawn dart. No, Okada counters and tries a tombstone. No, Ibushi tries another lawn dart. Okada counters that with a backslide, traps the arm…and lands a Rainmaker. But Okada’s not done. He maintains wrist control and lands a second Rainmaker. He still won’t pin. Okada tries a third one. Ibushi escapes and lands a straightjacket German suplex and then transitions into his Kamigoye finisher. No, Okada blocks it and dropkicks Ibushi’s neck. Okada goes for another standing dropkick. Ibushi pulls a Kenny Omega and answers with a midair Ligerbomb. One, two, Okada kicks out. 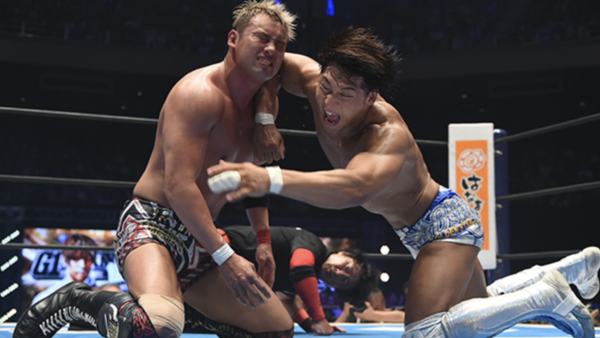 This was a weird match. The first fifteen minutes were completely bland with nothing special happening. Seriously, if you’ve seen one big Okada or Ibushi match then you’ve seen them all. It wasn’t until the closing ten minutes that things actually got interesting. But that’s it…they were merely interesting. There was nothing special here. It was one of the most unspectacular G1 matches in modern memory, which in turn made it disappointing considering how much praise there has been for it.

Even with a white-hot pro-Ibushi crowd, there wasn’t much to this match. Ibushi and Okada spent the first half wrestling mechanically, doing the same moves and exact same sequences they’ve done countless times before. Nothing looked particularly damaging until Okada landed his ringside DDT. That was supposed to be a big turning point for Okada, but it didn’t come off like that because Ibushi barely sold it. It wasn’t long before Ibushi was back in the driver’s seat spamming flipping moves and diving to the floor. So much for that DDT by Okada meaning something.

Once the second half started, the match became your typical New Japan main event. It was filled with last-second counters, high-impact bombs, painful-looking strikes (especially the dropkicks being spammed by both guys), and more long counters. Now, normally I praise these things as being so good they make the match truly worth watching. But that’s not the case here. No matter how much Okada and Ibushi tried to make something out of this match, it just never reached that next level. They spent too much time trading forearms and kicking out of moves that no one believed would end the match. That’s one of the biggest disappointments here. Okada only really had the Rainmaker lariat as a match-ending finisher, so all of his other near-falls were useless, especially since Ibushi was the kind of wrestler that would expend tons of energy and never really show he was truly exhausted. Ibushi was the same, landing some big moves here and there and pinned for no reason since no one bought those moves of his as match-enders.

It was just one of those big matches filled with move spam without much of a story. worse, Okada missed out on a golden opportunity to make Ibushi’s march to victory actually mean something but neglected it completely. Twice in the match Okada caught Ibushi’s leg to block the Kamigoye. All he had to do was something, anything, to weaken the knee and take Ibushi’s weapon away from him. That would’ve forced Ibushi to be more careful and think strategically. Instead, Okada spammed the same big moves he always did, while incidentally also no-selling what was supposed to be crucial damage to his arm from an Ibushi kick.

Because of this lack of story, the match came off as, well, a bit boring. I know that’s hard to fathom since both of these guys are so adored these days, but it’s true. They just spammed their moves without giving the audience anything to really sink their teeth into. There wasn’t any moment when Ibushi came across as a real sympathetic babyface overcoming the established company ace. Even the token forearm exchange felt empty and lacking in excitement. For whatever reason, the action in the match came across as surface-level and lacking in many things that were needed to make it into something truly special.

Ibushi and Okada are undeniably two of the best wrestlers active today, but they really dropped the ball here. They didn’t do anything outwardly bad, but the match they had lacked rhyme or reason. The match started off slow and dragged on forever until it reached its twist-and-turn-filled finish. And yet, for all the fun stuff they did pull off, things never really went into high gear or became truly special.

Even with the story of Ibushi the outsider surpassing Okada the ace, this match didn’t live up to the hype. Having nonsensical dives, crazy piledrivers, and dropkicks galore is great and all, but only if all that stuff builds up to something. Based on how the match ended, watching it would leave you thinking ‘yay, it’s over’ with the enthusiasm of a golf commentator instead of something with edge-of-your-seat action. All in all, a disappointment if there ever was one.