You know a match is brutal and violent when executives have to swoop in and ban the wrestlers involved from ever fighting each other on TV ever again. Today we revisit the Texas Deathmatch between Vader and Cactus Jack from WCW Halloween Havoc 1993.

This match was the culmination of a months-long rivalry and it made headlines across North America. It was such a violent and bloody match that the commentators couldn’t call much of the action during the second half. WCW, a company that marketed itself to children, got in trouble for showcasing something like this, especially with all the violent and unprotected chairshots that took place. It was extremely controversial and brutal for its day, yet at the same time it was hailed as one of the greatest matches of the year.

But does it hold up well to time? Read on to find out.

Vader and Cactus feuded throughout 1993 and their bitter war led to some famous moments. In April, Cactus beat Vader via count-out but it came at a steep cost: he suffered a broken nose and needed 27 stitches on his face. Vader beat him up so badly that WCW was forced to edit the match heavily to avoid getting severe fines and punishments for broadcasting such severe bleeding. A week later, Vader powerbombed Cactus onto the exposed concrete floor. Cactus hit it so hard he suffered a concussion and temporarily lost feeling in his left hand and leg, which sidelined him for months.

Now, all of this was serious; or at least, it was supposed to be. Cactus had suffered major injuries at a time when concussions were said to still be misunderstood in the wrestling world. Unfortunately, WCW executives didn’t see it that way and turned the Cactus vignettes into comedy sketches about him having amnesia. It was a pretty tasteless angle that did nothing to portray Cactus in the right way.

Anyway, after being sidelined for months, Cactus returned later in the year and it was decided that he and Vader would settle the score. They would meet in a big singles match at Halloween Havoc, but the stipulation wouldn’t be decided until the show went live. That’s because Halloween Havoc had its own gimmick called ‘Spin the Wheel, Make the deal’, with a bunch of stipulations available. So yeah, it was technically possible for Vader and Cactus to have anything from a normal match, to a street fight, to a tuxedo match. 1990s WCW, everyone. Thankfully, the wheel landed on a useful gimmick: Texas Deathmatch. With a name like that, it must’ve been a brutal match, right? 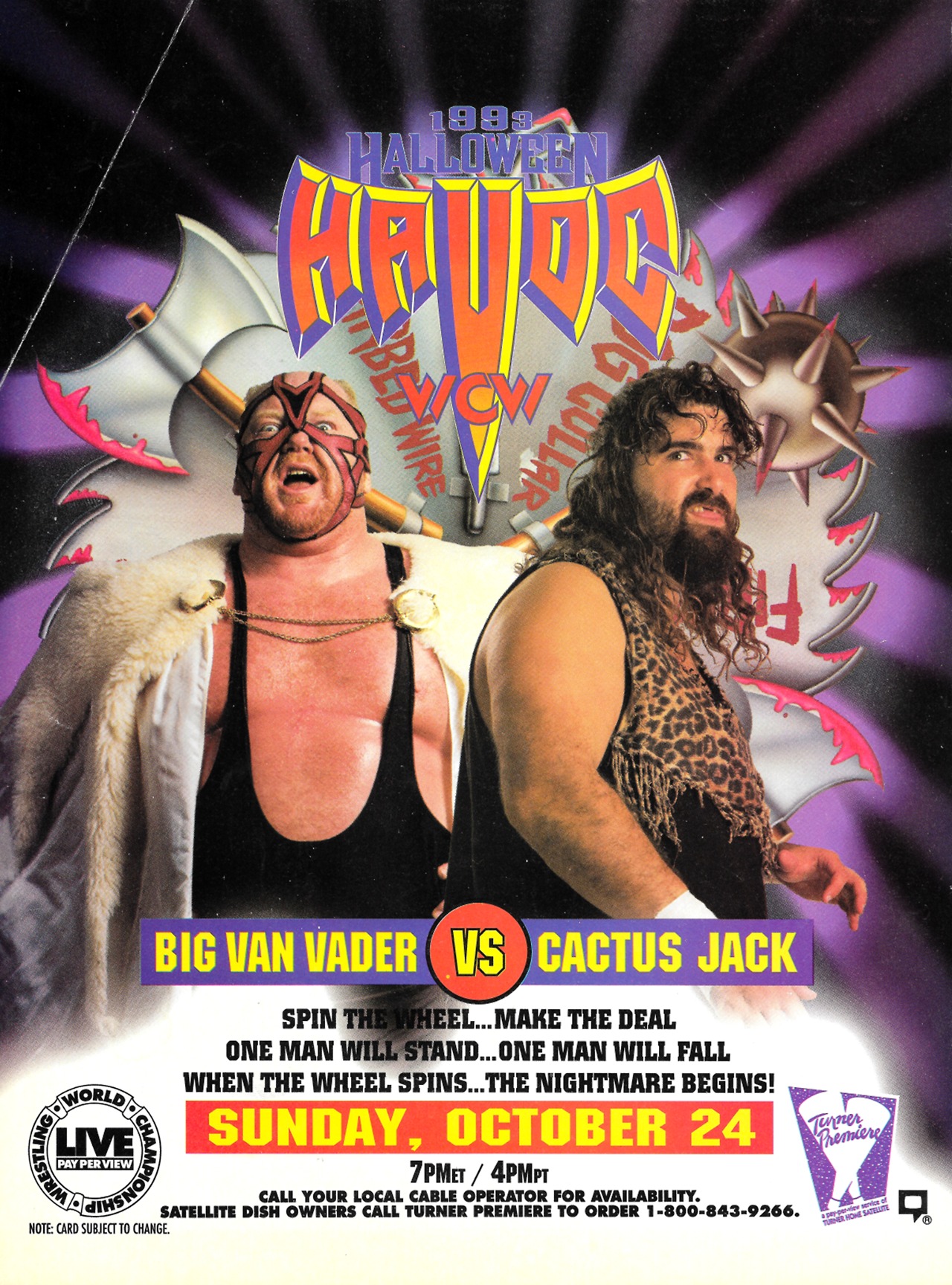 This match originally took place on October 24th, 1993 at Halloween Havoc ’93. It was originally rated ****3/4 out of five by the Wrestling Observer’s Dave Meltzer. Let’s take a closer look to see how well it holds up.

This is a Texas Deathmatch courtesy of the show’s ‘spin the wheel, make the deal’ gimmick. There are no disqualifications in this match. Wrestlers can pin each other, but pinning won’t end the match. In other words, they can pin each other as many times as they want but the match will keep going. After a fall is decided, there is a 30-second rest period. Said falls can take place anywhere in the building. The only way to win is for one wrestler to beaten so badly that they can’t get to their feet by the referee’s ten-count.

Vader enters first accompanied by his manager Harley Race. Cactus enters next and charges at Vader and takes him down on the entrance ramp. Vader rips his mask off as he trades punches with Cactus. He winds up for a punch but Cactus ducks and Vader ends up hitting the post instead. Sensing an opening, Cactus smashes Vader’s hand into the barricade and then hits it with the edge of a chair. Vader tries fighting back with his good hand but Cactus out-brawls him. Because no-one out-brawls Cactus Jack. Cactus whacks Vader with a fan’s camera and then cracks him over the head with a steel chair. He tosses Vader into the ring and charges into the corner. Vader boots him first and lands a huge clothesline.

Vader hits some stiff punches and his last one knocks Cactus back onto the apron. He tries suplexing Cactus over the rope into the ring but Cactus blocks and reverses. Cactus suplexes Vader onto the entrance ramp. He follows with a Backdrop onto the entrance ramp and then starts laying into Vader with forearms. Suddenly, over comes Harley Race with a chair. But Cactus sees him and cuts him off before he can swing it. Cactus punches Race down and hits Vader with another chairshot to the head. They continue brawling until they fall into a pre-dug ‘grave’ with the words ‘RIP Vader’ written on the tombstone. Cactus emerges a bloody mess. Vader emerges after him, also bloodied. Cactus clotheslines him out of nowhere and gets a three-count.

They announce the 30-second rest period before the match continues. Vader starts getting to his feet to continue as Cactus grabs a…cactus. He smashes Vader with it and Vader falls from the ramp to the floor. Cactus follows with an elbow drop. Cactus pins and gets another three-count.

Another rest period ensues as Vader barely moves. Cactus goes after him with stomps and punches until Vader drags him down to the floor. Vader lands a head-butt but Cactus takes control with punches and smashes Vader head-first into the steel steps. As Vader staggers, Cactus puts a table in the ring. Cactus sets the table up in a corner (incorrectly, forcing the ref to fix it for him) but Vader uses that to land some stiff body punches. He whips Cactus, Cactus reverses, and Vader goes running into the table. Cactus pins. Vader kicks out. Cactus smashes Vader’s head into the table and they go back to brawling ringside. Cactus goes for a sunset flip from the apron to the floor. Vader’s about to counter by sitting down buy Cactus moves. Cactus lifts Vader up for a suplex and drapes him abdomen-first on the steel barricade. He charges again, but Vader dodges and Cactus falls onto the floor. Vader lands some body blows and throws Cactus over the barricade. In the ring, Vader slams Cactus and goes to the top rope. MOONSAULT BY VADER. He pins and gets the three-count. Vader has won the third fall.

The ref starts counting for Cactus to get up and he gets up at three. Vader hammers him in the corner and throws him back onto the ramp. Cactus jumps on his back for what looks like a sleeper but Vader falls backwards, squishing Cactus. Vader gets a measure of revenge and smacks Cactus’s face with a steel chair. He’s not done. DDT onto the steel chair. The ref calls over some paramedics to check on Cactus. Vader scares the paramedics off and pins Cactus for another three-count. The score is now two falls each.

The next thirty-second rest period begins and Foley starts getting up. He lands a low blow on Vader and manages to DDT Vader onto that same steel chair. The rest period ends and both men are down. The ref starts counting. If he gets to ten and someone isn’t on their feet, that wrestler loses. Both Vader and Cactus start getting up at the count of six. Cactus gets to his feet at eight but he’s too close to Race. Race pulls out a taser. Race stuns Cactus in the leg with it and Cactus goes back down. Vader gets to his feet but Cactus can’t. The referee calls for the bell. The match is over.

Rumor has it that the entire show, including all the finishes, was booked by Dusty Rhodes. If that’s true, I’m starting to understand why people really started turning on him at the time.

This match was weird from the beginning. The stipulation really made it hard to follow; even the commentators weren’t sure when something was a fall or not. And while the crowd was lively enough to cheer along, there were moments when they were just as confused and didn’t know how to react. Granted, Cactus and Vader brawled very well and got so much out of so little. Cactus was especially great here, having hit his trademark crazy offense and took crazy bumps like only he could. He was in his element here while Vader…really wasn’t.

And yet, the match was filled with inconsistent pacing courtesy of the stipulation. The thirty-second rest periods sucked the air out of the match during moments when it tensest. It created several moments of dead air when nothing was happening and the wrestlers were just standing around. They really overcomplicated this match when it could’ve been left as a straight no-disqualification match. They tried to make it into something extra serious with all those additional falls, but that concept just didn’t work in execution. The advantage in falls didn’t come across as important, nor did those falls themselves. Since the only way to win was to beat your opponent so badly they couldn’t get up, the falls didn’t actually serve a purpose, not even a psychological one. There was no sudden urgency from either wrestler when the scores changed; it was one continuous brawl with some added nonsense to fluff the match.

Worse, everything came crashing down at the end thanks to a terrible finish. It was a cheap cop-out for Vader to win thanks to bulls**t from his manager. Vader’s entire gimmick was that he was this monstrous beast that couldn’t be slain and that anyone that did manage to do that would be seen as a conquering hero. By having a screwy/Dusty finish, the match benefitted no-one. The surprise move by Race to tase Cactus didn’t protect Vader as much as they might’ve hoped. Sure, Vader won, but it was a tainted victory that weakened his aura by making him need BS to win against Cactus. Maybe they did that finish to justify a rematch; but there are better ways of doing that without requiring shenanigans. If the goal of the match was to show how inhumanly tough both wrestlers were, then going for a sneaky, underhanded finish was the wrong way to achieve that goal.

This might’ve been exciting and revolutionary as a brawl almost thirty years ago, but my God has it not aged well. The few moments of solid chemistry between Cactus and Vader were ruined by a nonsensical stipulation and a dreadful finish. It was all over the place in terms of pacing and tension and lacked a cohesive flow. Just when things got good and exciting, the action came to a crashing halt because they had to take the silly stipulations into account.

Stuff like this serves as a reminder for why having the right finish is so important in any storytelling medium, including pro-wrestling. A match is only as good as its conclusion. If you spend an entire match telling a specific story that’s going in one direction and then you add some silly new element in the end, you’re going to disappoint your audience. Nonsensical swerves and hokey BS might get people talking for a few minutes, but they do a lot more damage longer-term. That was the case here; even with the ridiculous stipulation, this match would’ve been much better with a cleaner finish.

All in all, this is nothing special thirty years later, especially since both men would go one to have much better matches.