The lone Elimination Chamber match at the 2013 pay-per-view was done to determine the number one contender for the World Heavyweight Championship at WrestleMania.

By this point, the company had gone away from the brand split idea until it came back in the summer of 2016. They still had two major World Titles although the WWE Title (held by The Rock at this show) was clearly superior to the World Heavyweight Title.

Jack Swagger took his place in one of the four pods inside the Chamber. Kane was out next. Mark Henry was also in a pod. The last man in a pod is Randy Orton. That means Daniel Bryan and Chris Jericho will start a match. That’s not a surprise. I mentioned that in the preview. The two best workers opening things up is the smart thing to do. It’s amazing how that “randomly” happens huh? I don’t mind. 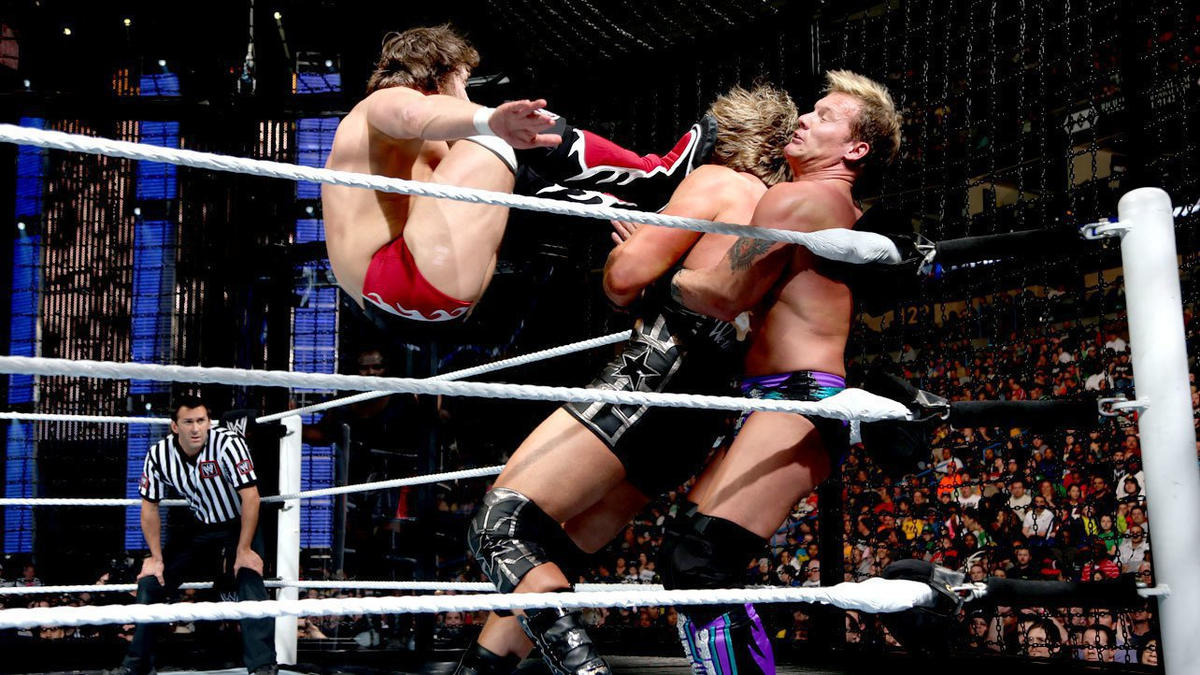 Elimination Chamber Match to Determine the #1 Contender to the World Heavyweight Championship: Daniel Bryan vs. Chris Jericho vs. Mark Henry vs. Randy Orton vs. Jack Swagger vs. Kane

The rules for the match are that every four minutes one of the men in the pods is released and joins the match. Five people will be eliminated by pinfall or submission. One man will win. Bryan and Jericho exchanged submission holds. Bryan hit a series of kicks to the chest of Jericho as the crowd chanted “yes” for every kick. Bryan tried giving Jericho a suplex outside the ring, but Jericho fought out of it. Jericho gave Bryan a slingshot into the chain. Back in the ring, Jericho hit a back suplex.

Four minutes into the match, Jack Swagger is the third man in the match. He attacked Jericho with a shoulderblock in the turnbuckle followed by a Swagger Bomb splash off the middle rope. Swagger picked up Bryan and drove him into the chain on the outside of the ring. Back in the ring, Jericho hit a dropkick on Swagger. Loud “Y2J” chants in support of Jericho. Jericho missed a splash attempt in the corner as Cole mentioned that Triple H has won four Chamber matches while Cena has won three and Edge has two. They’re the only ones to win more than one Chamber match. Swagger attacked Jericho outside the ring as they brawled on the steel grating. Bryan came out of nowhere with a knee attack off the top rope onto Swagger. That was a good spot. In the ring, Bryan missed his headbutt off the top onto Jericho.

The #4 man in the match is Kane. He worked with Bryan to take out Swagger and Jericho. Bryan hit his running dropkick in the corner. Kane threw Swagger over the top rope so that he landed on the steel grating. Bryan rolled up Kane for a pinfall attempt that didn’t work. Bryan tried to apologize. He wanted to hug it out. Bryan said “yes” while Kane said “no” and then Bryan shoved him. Kane decked Bryan with an uppercut. Running corner dropkick by Bryan on Kane. Kane came back with a sidewalk slam for two. Jericho and Swagger are basically chilling around the ring. Jericho put Bryan on his shoulders as Kane came off the top with a clothesline in a Legion of Doom/Road Warriors style Doomsday Device type of move. Kane hit a suplex on Swagger. Jericho dropkick on Swagger as the clock ticked down.

It’s Randy Orton in the #5 spot. Orton was on fire. He hit a lot of quick moves including a nice slingshot suplex on Bryan. Orton threw Kane into the chain repeatedly followed by a DDT off the middle rope with Kane’s head hitting the steel grating. Orton gave Swagger a superplex. Then Jericho gave a superplex to Bryan across the ring. All five guys were down. The announcers focused on Mark Henry, who was ready to enter the match.

Somebody gonna get they ass kicked as Mark Henry is the 6th and final man to enter the match. World’s Strongest Slam to Daniel Bryan and that’s enough to pin him. Bryan is out after 16 minutes.

Outside the ring, Henry threw Orton into one of the pods. Ouch. That looks painful. But I guess that’s the point huh? There was a showdown with Kane and Henry in the ring. Kane went for his top rope clothesline. Henry caught him. He picked up Kane and gave him the World’s Strongest Slam to eliminate him after 19 minutes.

Henry tried to drive Jericho into the pod, but Jericho countered it and he worked with Swagger to throw Henry’s back into the chain repeatedly. They gave Henry a double suplex onto the steel grating outside the ring. That was an excellent move right there. Jericho got a two count on Swagger after a cross body block off the top. Orton was still sitting in a pod after getting thrown into it. Swagger used his legs to counter the Walls of Jericho. Bulldog by Jericho. Henry caught Jericho as he was about to go for the Lionsault. Henry threw Jericho in the chain. Ouch. That looked painful too. Henry threw Jericho back into the ring where he knocked down Swagger. Henry missed a back splash off the middle rope. Jericho hit him with a Codebreaker. Orton came back with the RKO to eliminate Henry after 24 minutes.

After his elimination, Henry went back into the ring. He gave the World’s Strongest Slam to Swagger, Orton and Jericho back to back to back. The Smackdown GM Booker T, his adviser Theodore Long and a bunch of referees went into the ring to get Henry out of there.

Swagger crawled to Orton for a cover, but Orton kicked out at two. Orton and Jericho worked together as they whipped Swagger shoulder first into the steel ring post. After an exchange, Jericho went for a move off the top rope only for Orton to counter it with a dropkick. Orton took down Swagger with a powerslam followed by a powerslam on Jericho as well. Jericho with a springboard dropkick on Orton. Swagger with a belly to belly suplex on Jericho for two. Swagger went for the Patriot Act on Orton, but Jericho hit an enziguiri on Swagger. Jericho countered a Patriot Act attempt into the Walls of Jericho. Orton broke that with a modified backbreaker for two on Jericho. Thatch was past the 30 minute mark by this point.

Orton gave Swagger a backdrop over the top rope onto the steel grating. He gave Swagger and Jericho his DDT off the middle ropes. RKO on Jericho didn’t work. Orton countered the Lionsault with his knees up. Then Orton hit the RKO to eliminate Jericho.

Immediately after Orton’s pinfall, Swagger rolled up Orton and pinned him. One…two…three. That’s it. Swagger wins! The match went 32 minutes. 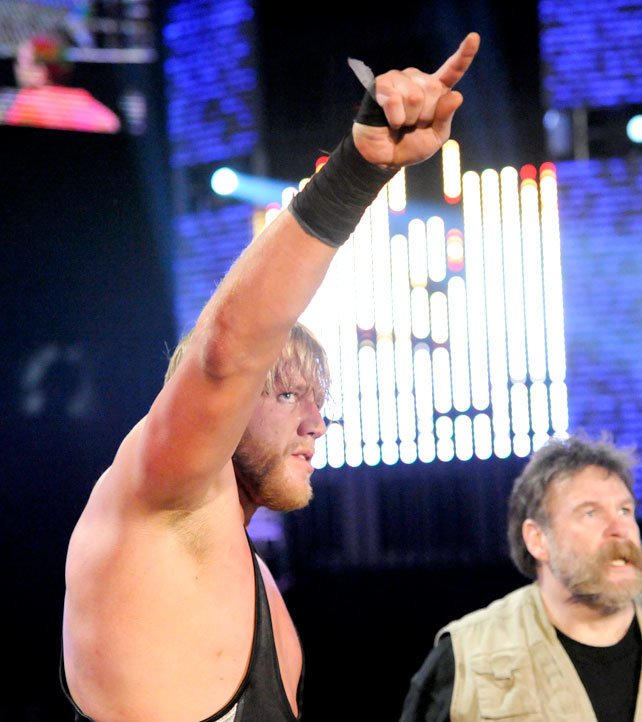 Analysis: **** That was an excellent Chamber match. They told a lot of stories in there with Henry dominating the action as soon as he entered, Orton going on a roll and Jericho lasting over 30 minutes. Ultimately it was Swagger that got the win by capitalizing when Orton was vulnerable. The booking of the match was very good. I wish the crowd was louder for certain aspects of it, but they did react to everything very well by the end of it. As for Swagger, he has a new theme song. New manager. New gimmick. And now a victory that gets him a World Title match at WrestleMania. It makes sense because the gimmick he has is about how Zeb and Jack don’t like foreigners while the World Champion is a Mexican like Alberto Del Rio. They have seven weeks to build up that obvious story. As somebody that has always liked Swagger, I’m glad he’s getting this opportunity. My pick was Orton, but it made sense for Swagger to win too. I don’t mind it at all. It was an entertaining match.

(When you look at the names in the match, it’s hard to believe they would put Jack Swagger over all of them, but that’s what happened. It wasn’t that much of a surprise because it was rumored that WWE wanted to go with Swagger. It’s just an interesting choice when looking back on it five years later.)

Wrestler that lasted the longest: Chris Jericho at 31:11

Most Eliminations: Mark Henry and Randy Orton with two.

Best Performers (3): Jack Swagger – He lasted the second-longest in the match and only pinned one guy at the end when he won it. Clever booking.

Randy Orton – The main rival of Swagger for most of the match.

Chris Jericho – He did well as the oldest guy in the match that carried a lot of it.

Most Memorable Moment: The sequence of Jericho with a Codebreaker on Henry followed by the RKO on Henry to eliminate the big man.