Taped at the Shrine Auditorium in San Antonio, Texas

Welcome back wrestling fans to your source for the most in-depth and exciting Ring of Honor review going today. The main event, a 6 man tag match between the Kingdom and reDRagon with Michael Elgin, was announced last week and it should be a lot of fun, with Elgin in particular usually shining in multi man matches. I’ll be reviewing the syndicated broadcast again this week and should be able to keep it up for the near future. Let’s get to it! 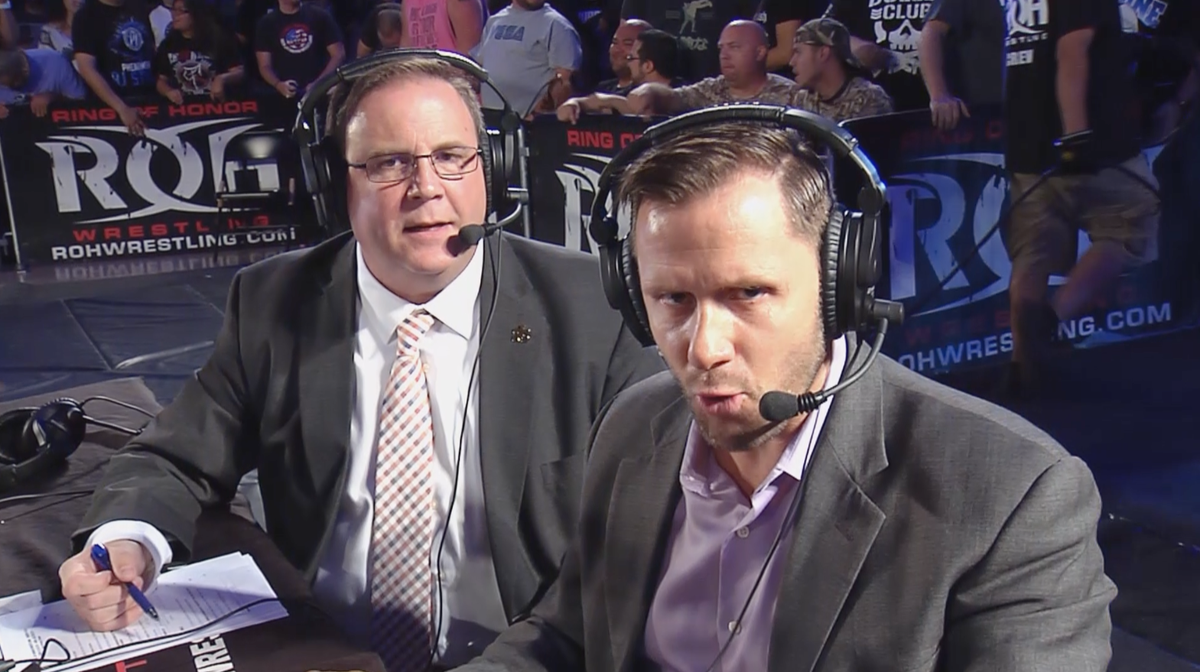 The commentary team is noticeably different this week with Nigel McGuinness filling in for Steve Corino who stepped down from his position following his punch to BJ Whitmer last week. Corino does a fine job but I like the shake-up, even if it’s just temporary. 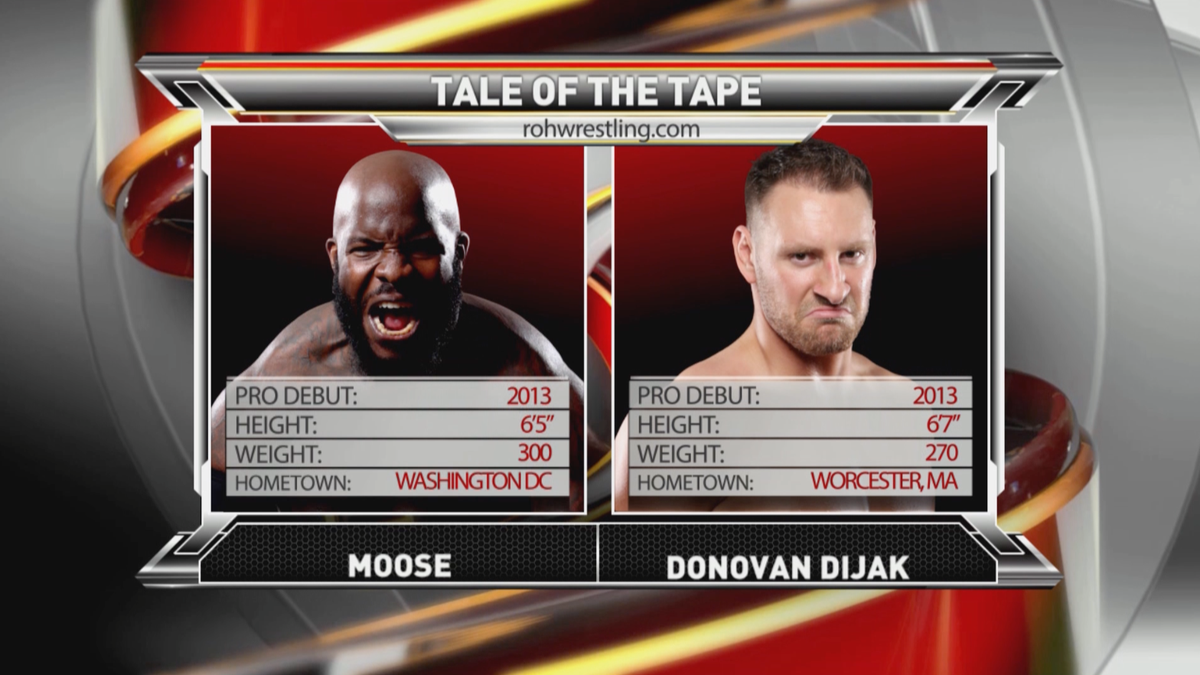 You can’t go wrong by taking the two biggest guys in the company and letting them go at it! Kevin Kelly lets us know that Moose had a great showing in Chicago Ridge against Jay Lethal, so Truth has a good reason to want Dijak to take down Moose. Dijak is unable to take Moose off of his feet. Moose reverses a hip toss to land on his feet and nails a dropkick, sending Dijak to the floor but neither man has been taken off their feet at this time. This changes when Moose savagely throws Dijak into the barricade. 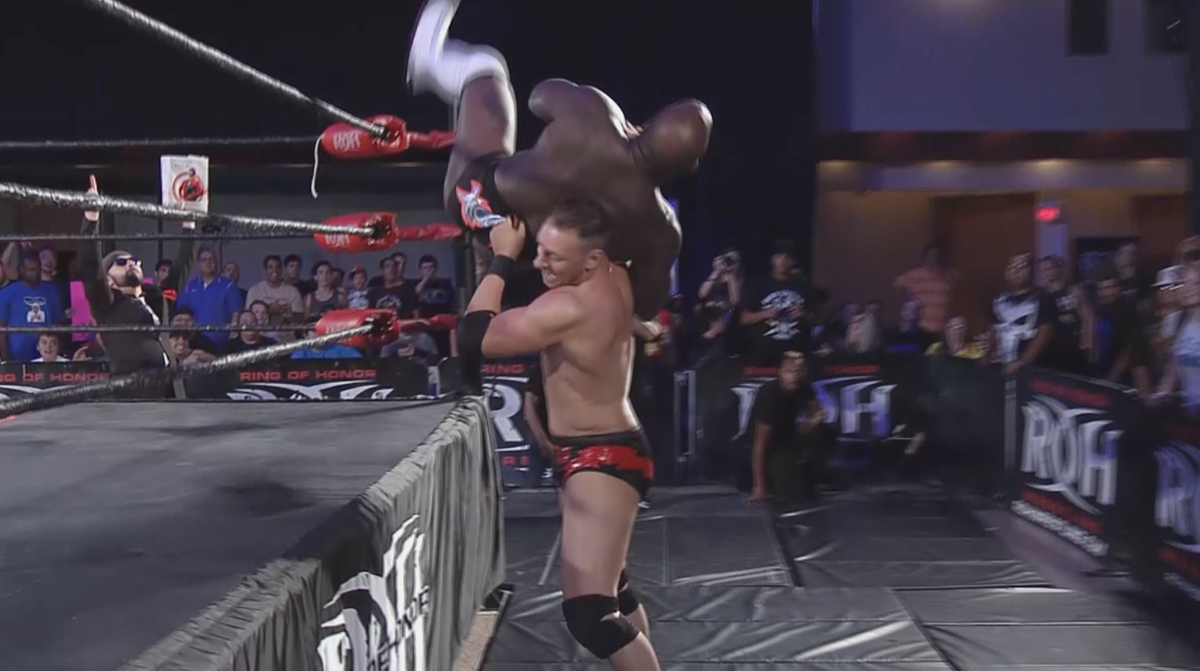 Dijak is able to recover and hit a big boot and a chokeslam onto the ring apron. Dijak follows that up with an Asai Moonsault onto Moose. The execution was a tad awkward but what a move from such a big man! Dijak then goes for another moonsault in the ring but Moose gets his knees up. Moose takes down Dijak with shoulder tackles and jumps up to dropkick Dijak from the turnbuckle. Moose shows his athleticism by following that up with a dive over the top rope to the floor. Dijak leapfrogs Moose as both men trade blows back and forth. Moose hits a bicycle kick but catches a spinning kick into a chokeslam by Dijak for a near fall. Dijak then goes for Feast your Eyes but Moose lands it and shoves Dijak down. Moose then runs up the ropes to hit an ensiguri on Dijak, followed by a big spear for the win 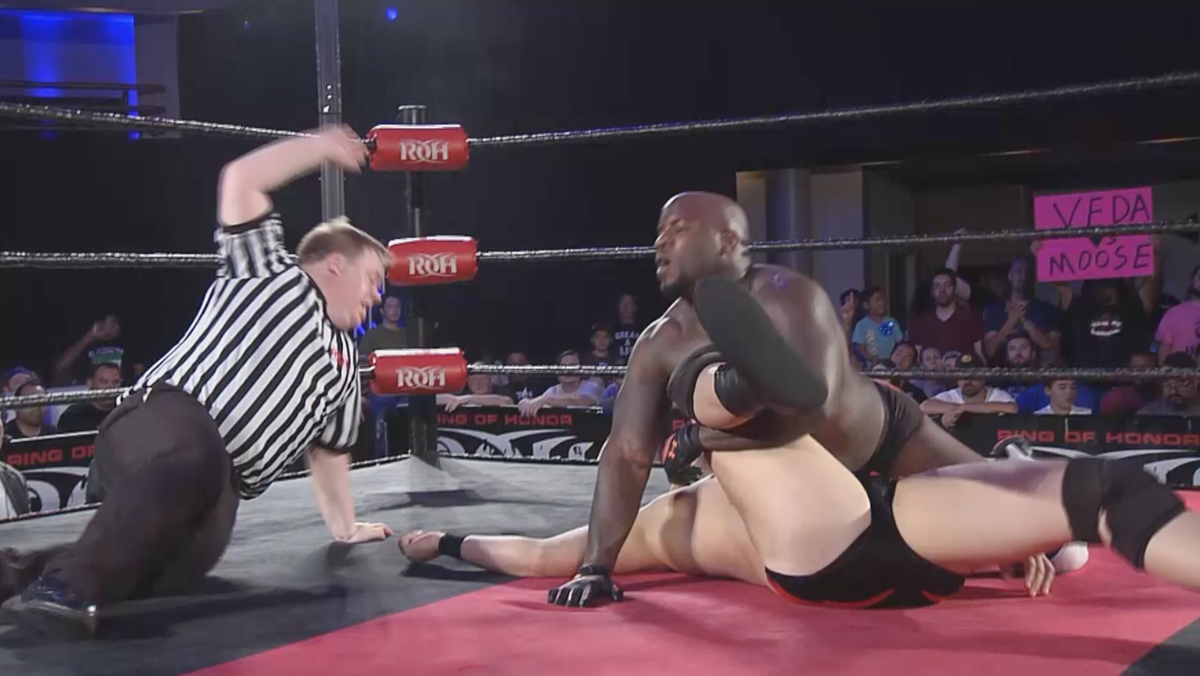 My take: The athleticism from both of these guys is off the charts. They both need some polish but the ability is most definitely there. Kevin Kelly pretty much spelled out that Moose will be coming for the ROH TV title sooner rather than later and he will be the first contender since Lethal won the ROH World title that I could see actually winning the belt. At the very least I would love to see what sort of match Jay Lethal could get out of the immensely talented, but still green Moose. 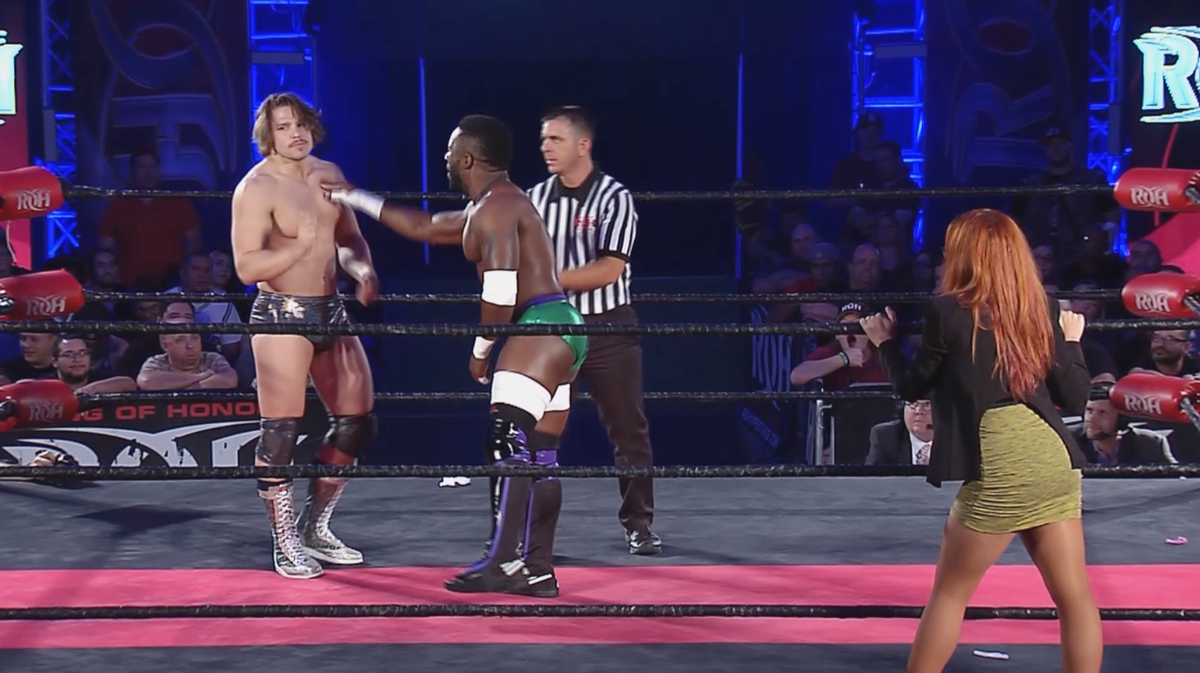 Cedric Alexander is still taped up from his war with Moose at ASE VII. The announcers allude to the fact that he may be milking the injury a bit. Castle has a wild look about him and he is missing that iconic peacock jumpsuit with the wings. Cedric starts the match off by poking Castle in the chest, and getting a suplex for his trouble. Castle then charges Cedric aggressively, dominating the match early on. Castle goes for a deadlift German suplex but changes course midair, slamming Cedric down violently. Castle then pounds the ribs of Cedric, and transitions right back to amateur style throws. Cedric finally misses a running boot, allowing Veda Scott to grab his leg and set him up for a dropkick. Cedric takes charge at this point, chopping Castle and taking him down with a big dropkick. Cedric then chops Castle who begins to no sell, violently backing Cedric into the opposite corner. Cedric gets away from a moment and flies over the top rope, only to be caught by Castle and slammed violently. Castle continues to dominate and hits the Bang-a-rang for the victory. 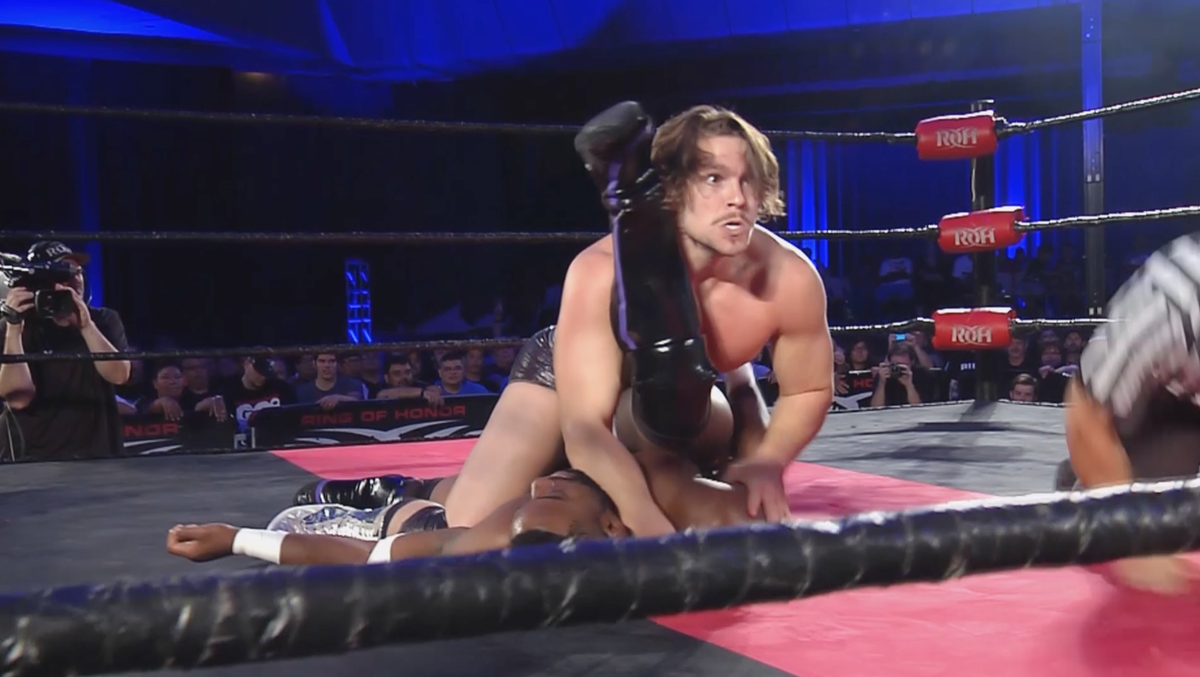 Post-match: Veda Scott says NM recklessly scheduled a No DQ match and a wrestler of Cedric’s caliber has no business being in that environment and Veda herself is suffering emotional distress. She says ROH is a dangerous working environment and ROH has profited from their pain and suffering for the last time. Veda says things are going to get more difficult and more expensive for ROH when she sees them in the courtroom 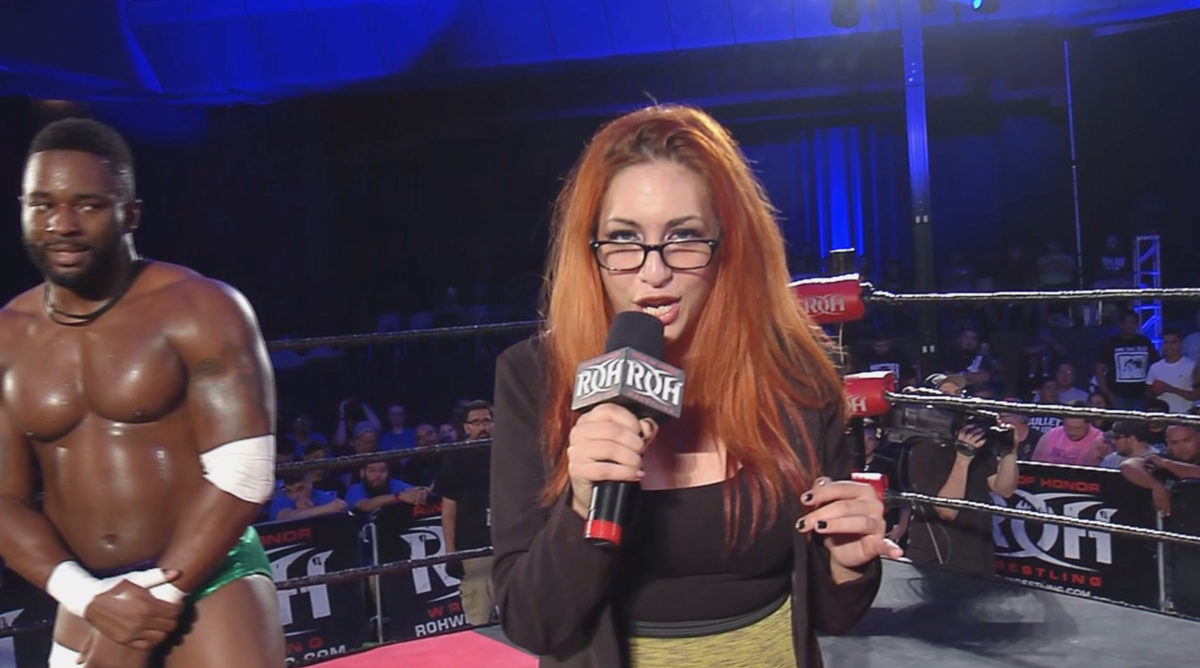 My take: As a former amateur wrestler, I love the blending of that style into pro wrestling. To me, it’s highly entertaining and adds a sense of realism that is hard to come by these days. If you want to see an example of what I’m talking about look no further than here. Billy Robinson V Antonio Inoki in 1975 is an all-time favorite of mine even though it predates me by 13 years. Now, Castle and Alexander are not anywhere near the level of those guys and this was just a short TV match as opposed to a big time title fight, but you get the idea. Let’s see more matches that incorporate this style and sense of realism! 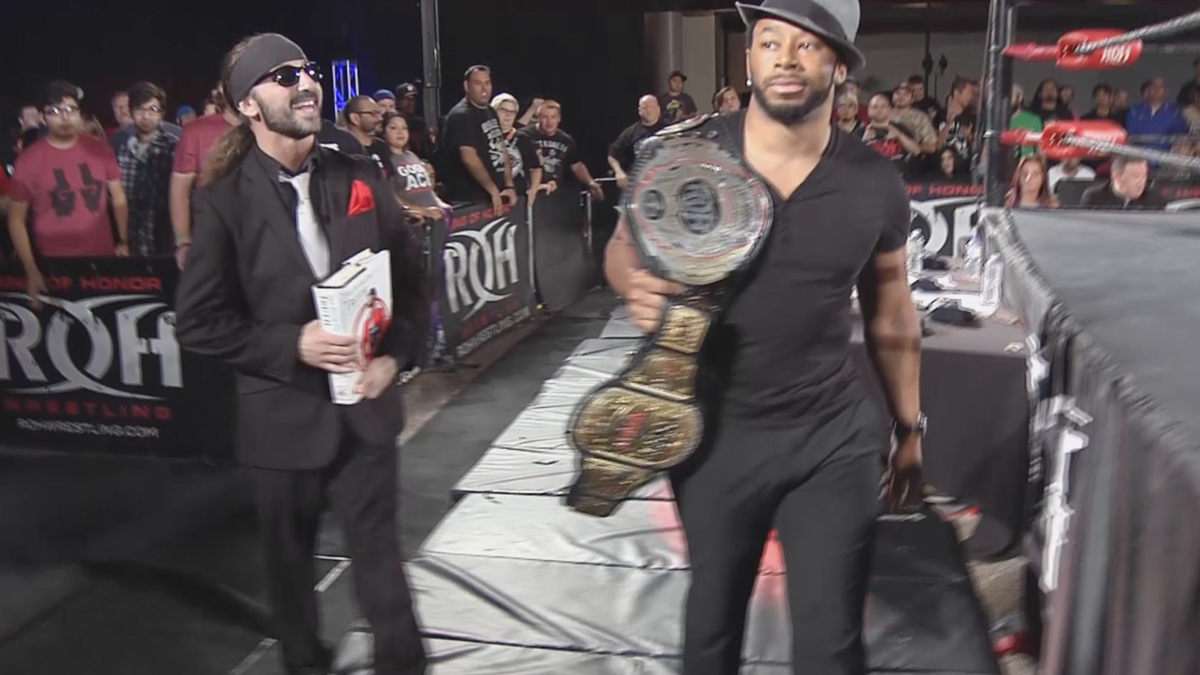 The ROH undisputed champion Jay Lethal makes his way to the ring. Before he can speak, the crowd breaks into an AJ Styles chant. Truth begins to cut a promo on Styles but Roderick Strong’s music hits as Mr. ROH makes his way to the ring. Roddy says he wants to congratulate the House of Truth for making history. He wants to congratulate the man who beat him the last time he and Lethal wrestled. Strong says he wants to shake that man’s hand. Jay laughs and goes to shake the hand of Strong but Strong pivots and shakes Martini’s hand, saying that if it wasn’t for Truth, Lethal wouldn’t even be in ROH. Jay then angrily tells Roddy that he’s the greatest wrestler in the world and he did it on his own. Roddy says he wants one more match. Jay says he beat Roddy a thousand times. Roddy says it’s not about the title but Jay says it’s all about the titles. Jay gets really intense and says he makes the decisions and there are many challengers for the ROH title. Nigel gets in the ring to confirm that Roddy isn’t the contender for the ROH title, but since there is no #1 contender for the ROH TV title Nigel books the match between Strong and Lethal for the ROH TV title right then and there. 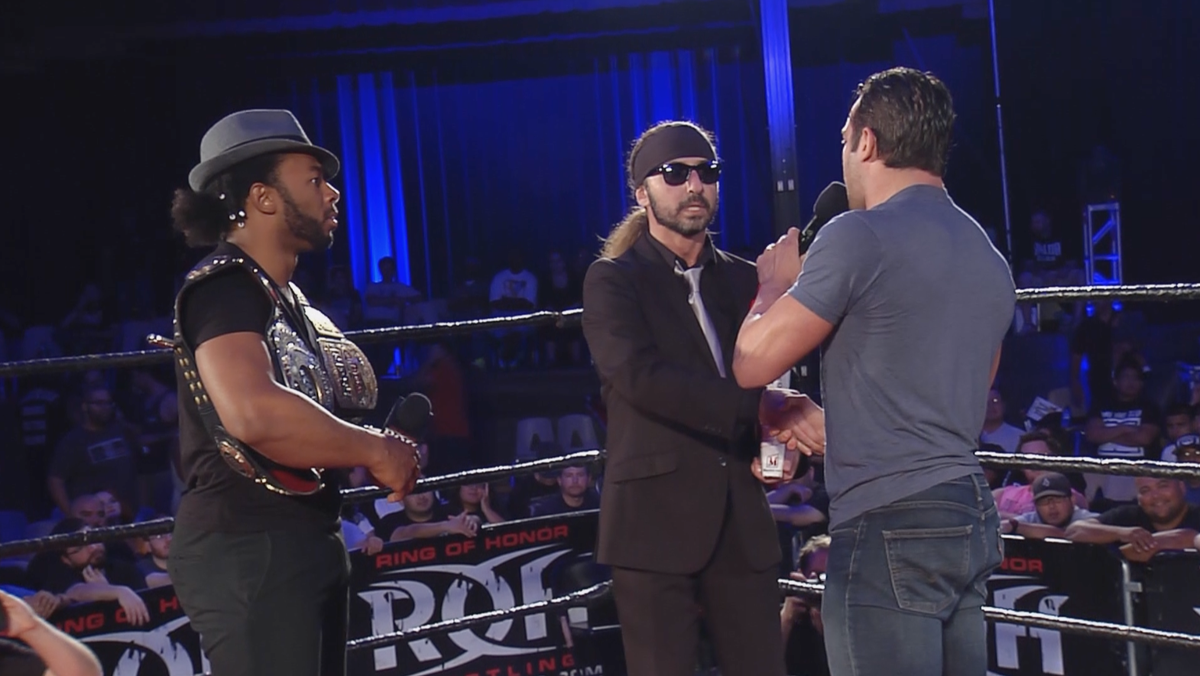 My take: Wow, what an amazing promo from Jay Lethal. Strong held up his end, but Lethal showed everyone watching why he is the man in ROH right now. I am once again excited to see these two lock up again even though I don’t see Strong taking the TV title at this time.

Inside ROH: Mandy Leon recaps matches 1-4 of the Sydal/ACH best of 5 series. The series is all tied up and the fourth match was the best in the series and one of the best matches I’ve seen this year. The final match should be something to see and Mandy announces that this will be at Survival of the Fittest on November 13th in Milwaukee, WI. The winner will earn a spot in the Survival of the Fittest match to earn a shot at the ROH Title. 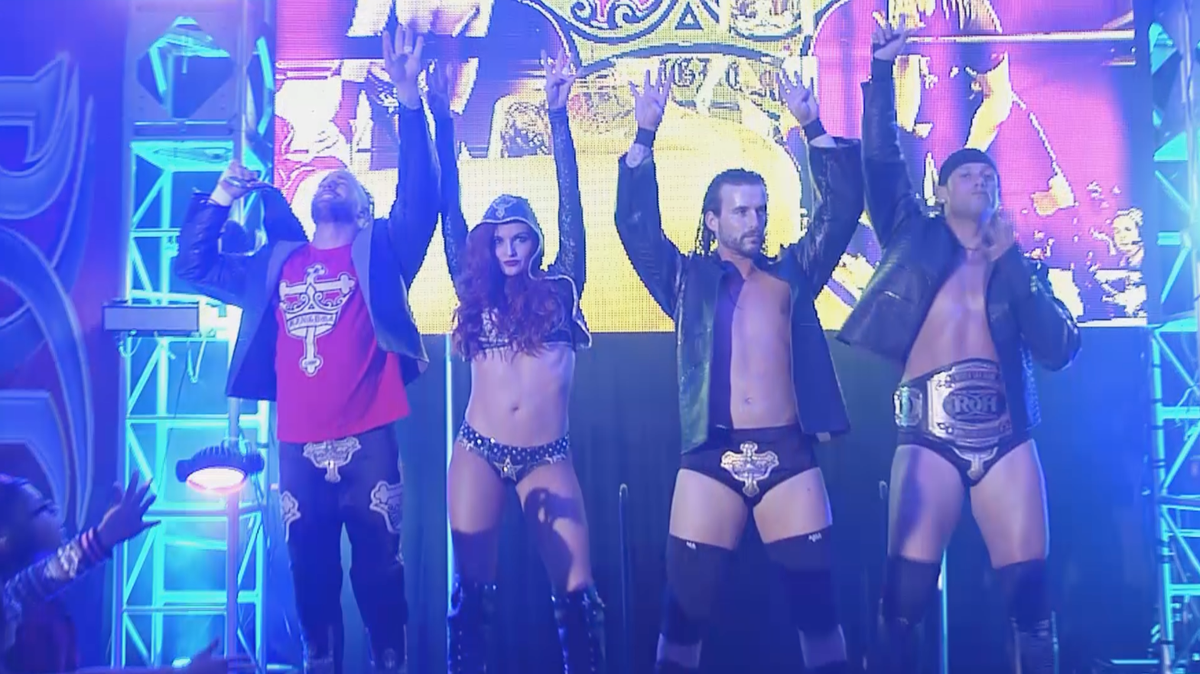 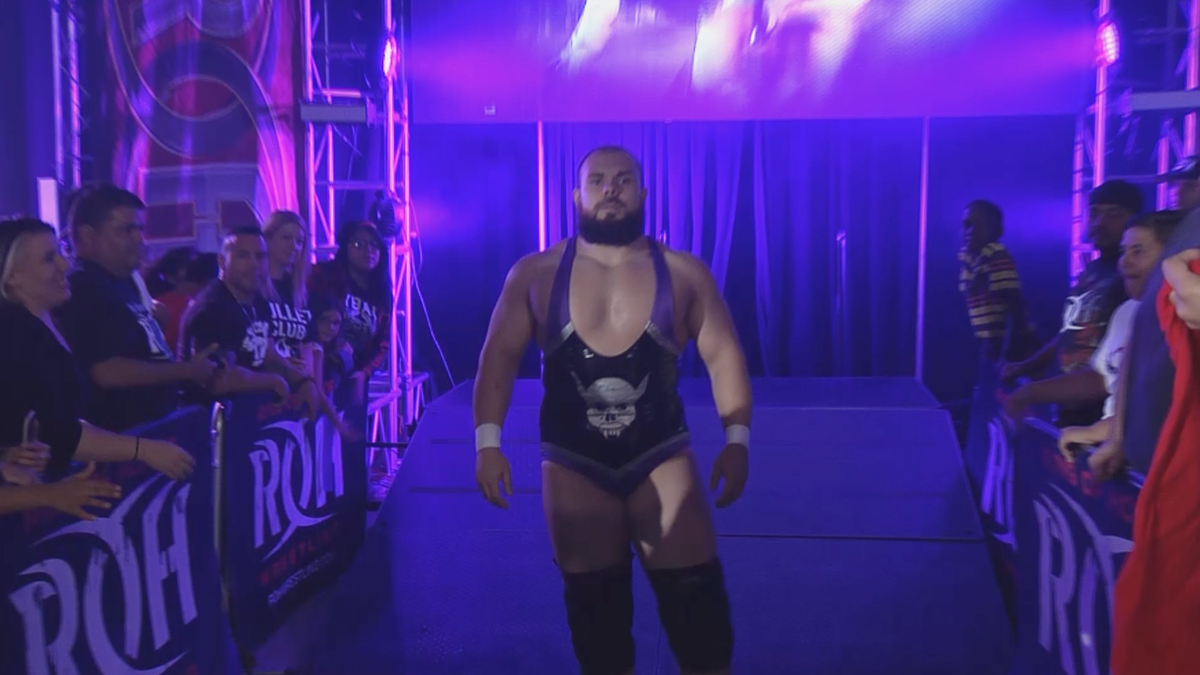 We’re back from break with Elgin holding Taven up in the delayed vertical suplex. Taven finally takes down Fish with an enziguri and tags in Adam Cole, who stomps Fish while Taven holds on to his leg. Cole lifts Fish and throws him headfirst into the turnbuckle. Cole spits in the direction of the babyface corner, riling up O’Reilly and allowing for a quick Kingdom double team. Michael Bennett gets the tag and grabs a chin lock. Bennett slingshots Fish into Cole and Taven flied from the top rope with an elbow drop onto the prone Bobby Fish. Cole tags in again opportunistically and drops a few knees on the face of Fish before covering for a 2 count. The Kingdom continues to work Fish over, trading tags and antagonizing the babyfaces. We cut to break with Adam Cole locking in a chin lock on Bobby Fish. 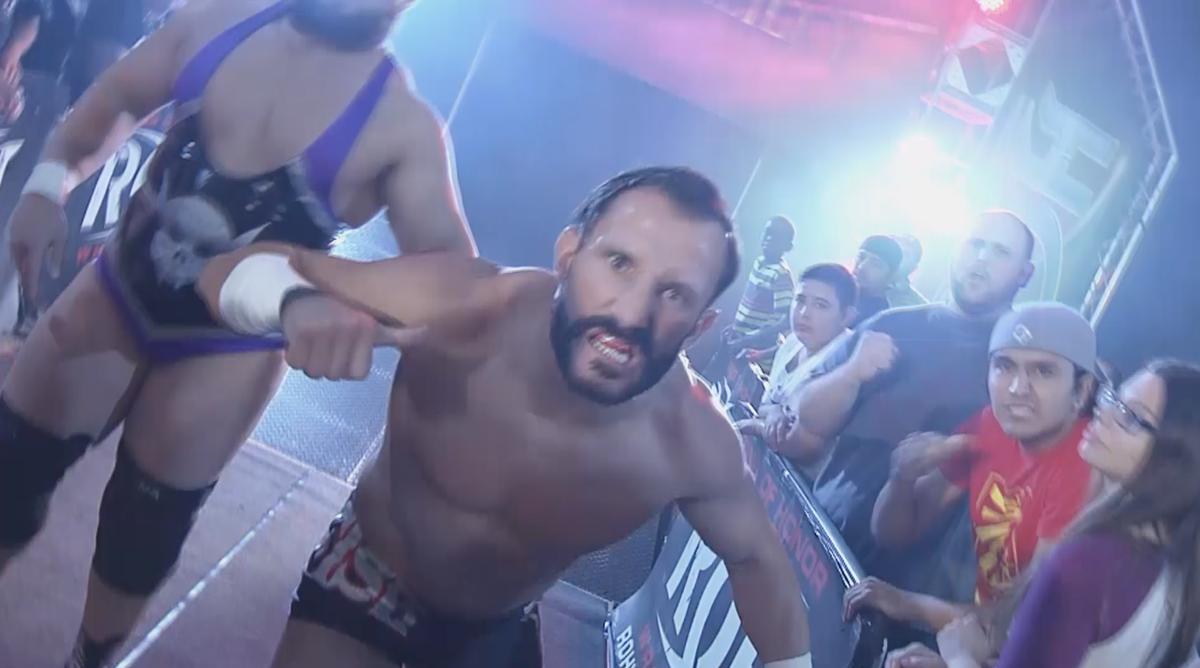 We’re back with Fish nailing a Samoan drop on Taven and making his way to Elgin for a hot tag. The crowd chants “Big Mike” and the big man doesn’t disappoint, hitting a double power slam on Taven and Bennett. Elgin covers for a 2 count. Elgin sets up a buckle bomb but Bennett powers out, only to finally be taken down with a big clothesline. Elgin then hits another powerful clothesline on Taven and crawls to Kyle O’Reilly. Kyle flies from the top rope, taking down Taven and Bennett but Cole hits O’Reilly from behind. Kyle recovers and reDRagon hits some innovative tag team offense on Taven and Bennett. The Kingdom takes control and Adam Cole nearly pins Kyle O’Reilly with a shining wizard. Kyle reverses a Hail Mary and Elgin hits a buckle bomb to take down Taven. ReDRagon then hits Chasing the Dragon on Bennett for the 3 count. 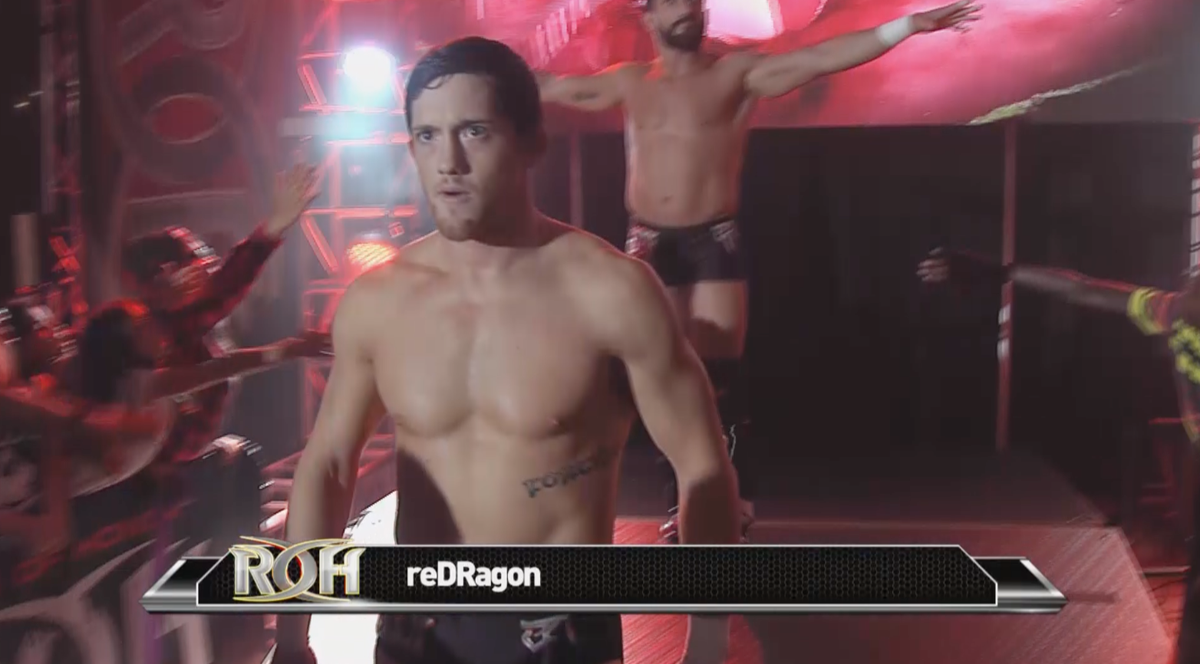 Post-Match: Cole nails O’Reilly with the belt. Kyle gets the microphone and demands a match with Adam Cole. Nigel says he can’t make an additional match for next week but he adds Kyle O’Reilly to the main event between Adam Cole and AJ Styles.

My take: Something never quite clicked with this match. It was serviceable enough and helped set up an intriguing main event for next week but it never really pulled me in. As always I enjoy the strongman theatrics from Michael Elgin and I’m glad the crowd is more appreciative of his unique talents these days. 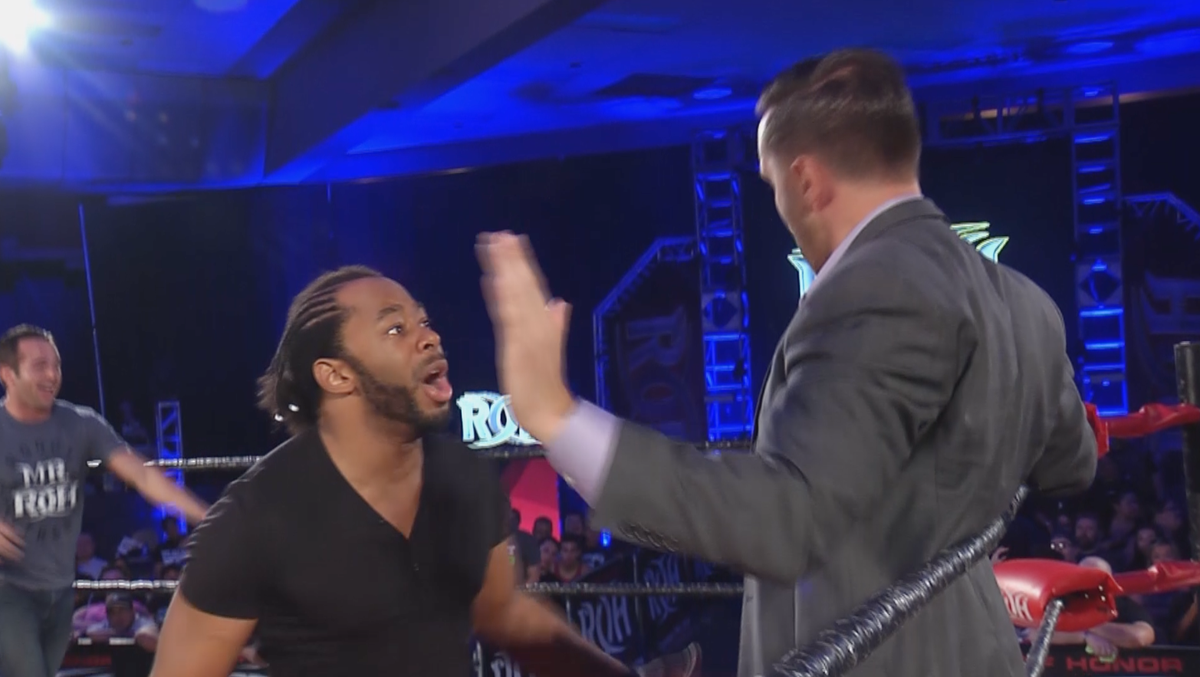 Honorable Mention: Well, this is a tough one this week, and I’m going to do something controversial. For the first time ever I am going to give this award to someone who didn’t even wrestle, Jay Lethal. This award goes to the most entertaining individual or tag team of the night and for me, the Lethal promo exchange with Roderick Strong takes the cake. Please congratulate @TheLethalJay on this amazing accomplishment as he patiently waits for his certificate of achievement and his collector’s edition scented candle.

Final analysis: This episode wasn’t bad by any means but I felt like it was a notch down in quality from what we have seen in week’s prior. The opener and second match delivered and were highly enjoyable. Jay Lethal looked like an absolute boss and the main event helped advance the weekly storylines. A short promo from Dalton Castle would have been welcome, but we may get that next week as Silas Young and the Beer City Bruiser, presumably with the boys in tow, take on the Young Bucks in what should be a highly entertaining contrast of styles.

What did you think of this week’s episode? Let us know in the comment selection below. You can also contact me via email webbanderson2@gmail.com or on twitter @webbanderson2. As always, thanks for reading!