The WWE Clash at the Castle event on September 3 will have a big six-woman tag team match that was set up during the opening segment on Monday’s Raw.

The trio of Bayley, IYO SKY and Dakota Kai have made a big impact in WWE since they showed up as a new group at SummerSlam two weeks ago. They started Raw this week with a promo. After Bayley taunted the Cleveland crowd for several minutes, they were interrupted by Raw Women’s Champion Bianca Belair, Asuka and Alexa Bliss.

The interruption from Belair and friends led to two sides exchanging words. It was Bayley who made the challenge for a match, but Bayley didn’t want to do it there in Cleveland. Bayley issued the challenge for Clash at the Castle. Belair accepted the match, which led to a wild brawl between the six women. It took several referees and officials/producers to break it up.

In addition to their match at Clash at the Castle, four of the women in the six-woman tag team match are in the Women’s Tag Team Title tournament that started on Raw.

The team of IYO SKY & Dakota Kai picked up a win on Raw when they defeated Dana Brooke & Tamina in the quarterfinals of the eight team tournament. The team of Alexa Bliss & Asuka will be in action in the tournament next week against Doudrop & Nikki A.S.H. and if they win that match then they will face Sky/Kai in the semifinals.

The women’s tag team match was the only match officially added to Clash at the Castle on this week’s Raw. Here’s the official lineup so far. 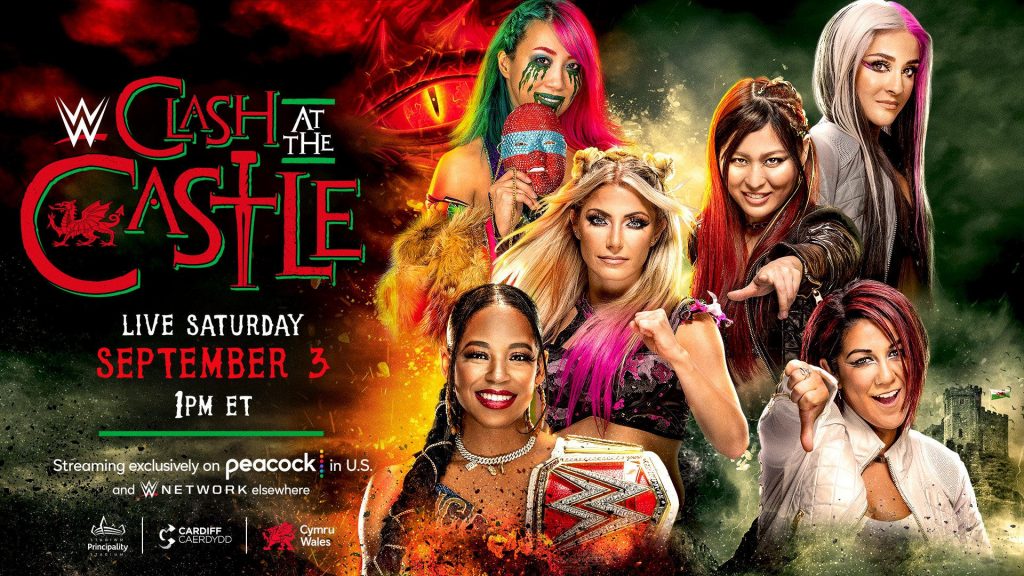 Another match rumored for Clash at the Castle is Riddle facing Seth “Freakin” Rollins in singles action. Riddle will be interviewed next week on Raw, so that could be when they make the match official.

Chris Jericho Announces 2022 US Fozzy Tour Rescheduled Due To Injury