The rumors of Sasha Banks returning to a WWE ring continue to swirl after the former Women’s Champion shared photos from when she recently trained in a wrestling ring.

It was in May 2022 when Sasha Banks and Naomi walked out of WWE because they were frustrated with the creative team regarding their run as the Women’s Tag Team Champions. Since that time, there have been rumors of a return, especially after Triple H took over as the Chief Content Officer in late July. In early August, there were reports that Banks & Naomi agreed to return although it was never stated when that might be.

In an update on Banks, she posted some photos on Instagram that will add to the speculation that she’s coming back to pro wrestling soon.

Sasha’s Instagram account is @themercedesvarnado (Mercedes Varnado is her real name) and she had photos of herself in gear ready to wrestle with the phrase “IT’S GO TIME” on the screen. There’s also a photo of a wrestling ring. Banks also posted the below image showing herself and some other wrestlers at a ring in Barcelo, Spain. You can see the photo below with Banks writing “Make your dreams come true” as well. 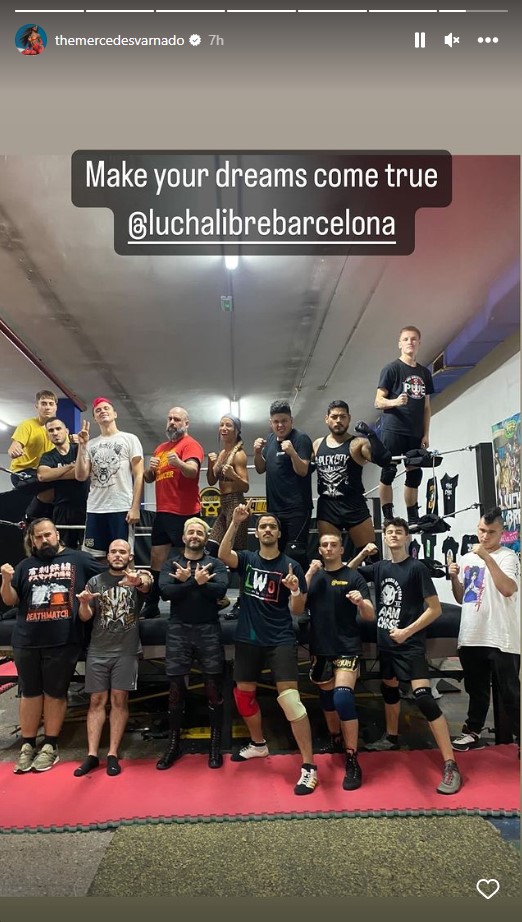 There is another photo of Banks on the LuchaLibre Barcelona Facebook page.

The reason that Banks was in Barcelona is that the CBD brand that Banks has along with former WWE superstar Kalisto (and his wife) known as Kanndela won an award at the World CBD Awards, which Banks tweeted about on October 20th. Banks has also done modeling work in her time away from WWE.

In other news related to a possible Banks return, WWE also referenced Banks recently at the Extreme Rules Premium Live Event, which could mean she is in the company’s good graces.

While a WWE return is still just a rumor, we do know Banks will be appearing on a USA Network show called Barmageddon that’s hosted by WWE Hall of Famer Nikki Bella. The show premieres on December 5th after Raw.

As for when Banks will return to WWE, that’s not known right now. However, there is speculation that it could be at Survivor Series (on November 26th) in her hometown of Boston since WWE will be having a women’s WarGames match at that show, so it would be a big spot to bring Banks back.