The Rock hasn’t had a proper match in a WWE ring since WrestleMania 29 in 2013. The Rock was nearly 41 years old at the time and even though he had a “match” at WrestleMania 32 in 2016 where he beat Erick Rowan with one Rock Bottom, Rock has said that he is retired. Then again, we all know that retirements in wrestling are never permanent.

The reason I bring this up is because Roman Reigns was interviewed by the Complex Load Management Podcast (thanks to WrestlingNewsCo for the transcript) and Reigns had some interesting things to say about his distant cousin The Rock and the possibility of at least one more match in a WWE ring.

“I think I’m the guy (to get Rock back in WWE). If there is anybody that he would feel comfortable with in the ring, and have the proper build up and can rise to that occasion, there’s no doubt I’m the guy. We will definitely have to crack a lot of eggs to get to that. That’s just good TV. Going forward and building a really dominant bad guy within myself and here comes the astronomical superstar, there has never been a guy on his level. You would have to build that villain to get to that point.”

Next year’s WrestleMania is scheduled to take place at the brand new SoFi Stadium in Los Angeles, so if Rock did come back for a WrestleMania it would make sense for it to be in LA since he’s a big Hollywood movie star. Obviously, Rock would be fine anywhere. Rock is 48 years old now, but he remains in great shape obviously. The Rock did respond to a Roman Reigns Instagram post after Clash of Champions. 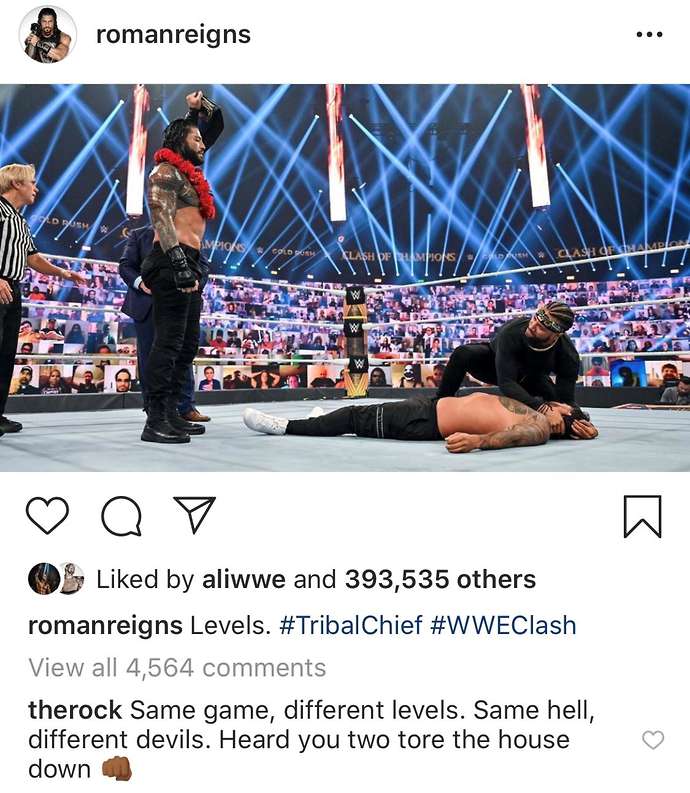 Moving on, Reigns was also asked if he had goals for himself in the movies since he has had a taste of being in films like Hobbs & Shaw starring The Rock.

“I think so. It was tough for me because I had opportunities come my way in the last 8 months but because I wasn’t working I felt weird about trying to take on other opportunities when the mainstream of my income wasn’t being taken care of. I was at home because of the pandemic. I put everything aside, project wise, off until I got back to doing what I do with my day job. But yea, you can’t fall down your whole life. I’m trying to take care of myself the best I can and stay in shape, but your spine only wants to hit that mat so often. There is a legit bump card we have as performers and you don’t want to wear that thing out. I don’t want to hit the last tick and be like, I’m done. I want to have a few more bumps on my card and have them on reserve. I have like 3 more years of bumps for sure, but I don’t want to use them. I think Hollywood if the right opportunities come my way and it all works out, I would definitely be into it. There is nothing like creating and seeing the magic happen. I think it would be a natural fit to work my way in a smaller role situation and learn as much as I can and gather as much info and possible and one day I could hold it down and be that lead guy. I don’t want to rush into anything. I’m enjoying what I’m doing now. If the right opportunity came, I would be game.”

Reigns also talked about his new heel person as the WWE Universal Champion on Smackdown.

“I think, how do we deliver it in a different way as opposed to just, oh he’s a bad guy. He’s this nasty human being now. I wanted to be able to do it in layers. That way the character is not just defined as being a bad guy. He’s the guy who’s faced with these decisions. In my mind and in the character’s mind, he’s justified in what he’s doing so he’s technically not wrong, but maybe rubbing people the wrong way or is using a different route than what most people were used to seeing the old character take.”

Reigns made it clear that he’s not a “Paul Heyman Guy” like a Brock Lesnar or others, but that Heyman is a Roman Reigns Guy, so to speak.

“I’m not a Paul Heyman guy. He’s a Roman Reigns guy. It feels good to switch it up and add a few different layers. For 4 or 5 years, I’ve been running consistent with the character that I had. I fell into a good groove. It got real easy. Anytime you do something over and over you get good at it and you get conditioned. I got to the point I could run into that baby face mode in my sleep, especially with an energized crowd. It’s weird doing it in the Thunderdome. I needed something to get me out of that condition mode and test me. That’s where I find myself now, working with a different attitude and having to rely on my instinct. Technically it’s the opposite of what I’ve been doing. They always said a great babyface will make a great heel and vice versa. Once you figure out one side of it, you know what the opposite needs. It’s been cool. But it is good to be working with Paul Heyman.”

Speaking of a Paul Heyman Guy, Reigns had some not so kind words about former WWE Champion CM Punk, who hasn’t wrestled for WWE since he left the company in January 2014. Reigns added that he didn’t like the guy, which could be a work, but he’s most likely being honest in an interview like this. Thanks to WrestlingInc for this transcript.

“All the way from someone as big as The Rock to someone like CM Punk – someone who really hits home with our audience and hardcore fans. If you’ve watched wrestling for the last 10-15 years and love it and it’s in your blood, then you probably have some kind of feelings about that guy. I know I do. Just by doing one of these things, he made my job a lot harder. If it’s something that the fans can get behind and can sink their teeth into and really dive into the creative with us, then I’m willing to do it.”

“I don’t like the guy. I don’t know many people who do. I just don’t know many who do, but I’m willing to put business first and make really good content if that’s the case. He’d probably have to be slapped around a few times in order to get his mind right, but if he’s willing and the fans and audience are going to like it and be into it, then most likely I’m going to be into it.”

There’s a lot more in the interview with Roman Reigns, so check it out here on the Complex Load Management podcast. Go to the 19:15 mark for the Roman Reigns discussion.