The WWE NXT Worlds Collide Premium Live Event has added three more title matches in addition to a non-title matchup that makes it six official matches for the show.

There were only two official Worlds Collide matches going into the August 30 edition of NXT, so WWE has decided to add three more title matches. The reason WWE is doing the Worlds Collide event on Sunday, September 4th is because NXT UK is ending since the company has plans to launch NXT Europe in 2023.

Carmelo Hayes, the NXT North American Champion, was in the ring in the main for a promo with Trick Williams. Melo wasn’t happy about being left off Worlds Collide. The promo was interrupted by Smackdown’s Ricochet, who got in Melo’s face to say that while Melo has successfully defended his title, they haven’t been memorable matches. The verbal exchange led to a challenge for Worlds Collide, so it will be Hayes defending the NXT North American Title against Ricochet, who held the North American Title in the past.

There will also be an NXT Women’s Title match at Worlds Collide. Following a victory over Ivy Nile & Tatum Paxley, the championship team of Kayden Carter & Katana chance were interrupted. The Raw tag team Doudrop & Nikki A.S.H. issued a challenge for the title match and the champions accepted.

IS THIS HAPPENING?!?!@WWENikkiASH and @DoudropWWE have their sights set on the #WWENXT Women's Tag Team Titles! #NXTWorldsCollide@Katana_WWE@wwekaydenpic.twitter.com/1tFwa5aHpY

Here’s the full lineup for Worlds Collide on Sunday, September 4. 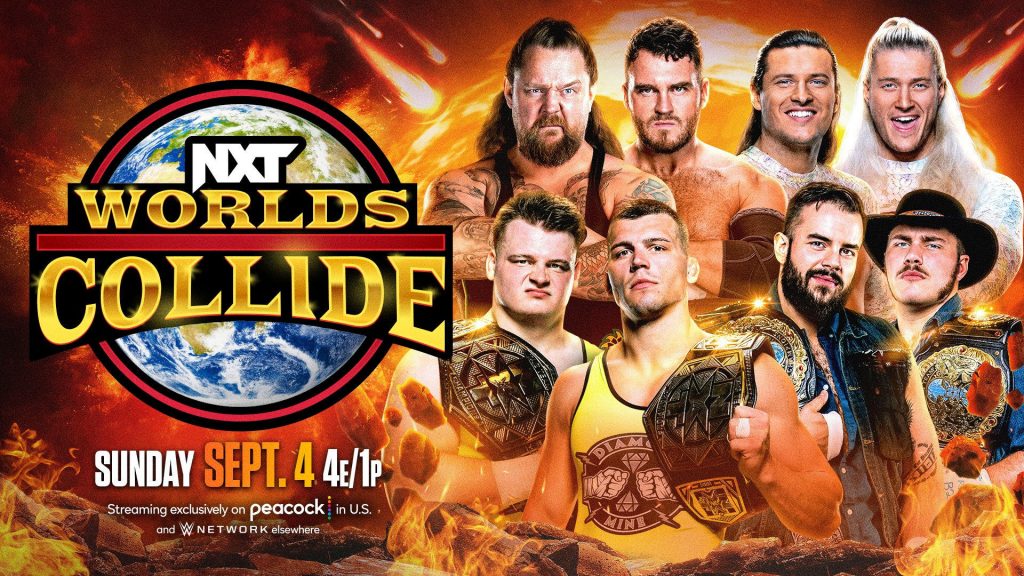 You can watch NXT Worlds Collide on Sunday, September 4, at 3 p.m. ET (4 p.m. ET for the main show), streaming live exclusively on Peacock in the United States and WWE Network everywhere else.

AEW Grand Slam To Host Binned All Out Match