Billy & Chuck was a controversial team that had a lot of success in WWE, but Billy Gunn also remembers a time when one segment made him feel very uncomfortable.

The team of Billy Gunn & Chuck Palumbo formed in late 2001 when the WCW/ECW Invasion angle was winding down. Billy was a WWE veteran from the Smoking Gunns & New Age Outlaws while Chuck came from WCW as a young talent with a lot of potential.

As the team of Billy & Chuck grew, they were part of segments where they were really happy to be around eachother and had some interesting dialogue at times. They were also given a “personal stylist” as a manager that was named Rico. They went on to become two-time WWE Tag Team Champions.

There were a lot of subtle hints that maybe Billy & Chuck were a gay couple, which led to a “commitment ceremony” on Smackdown in September. When it actually happened, it was revealed to be a publicity stunt that went a bit too far while both men were straight. 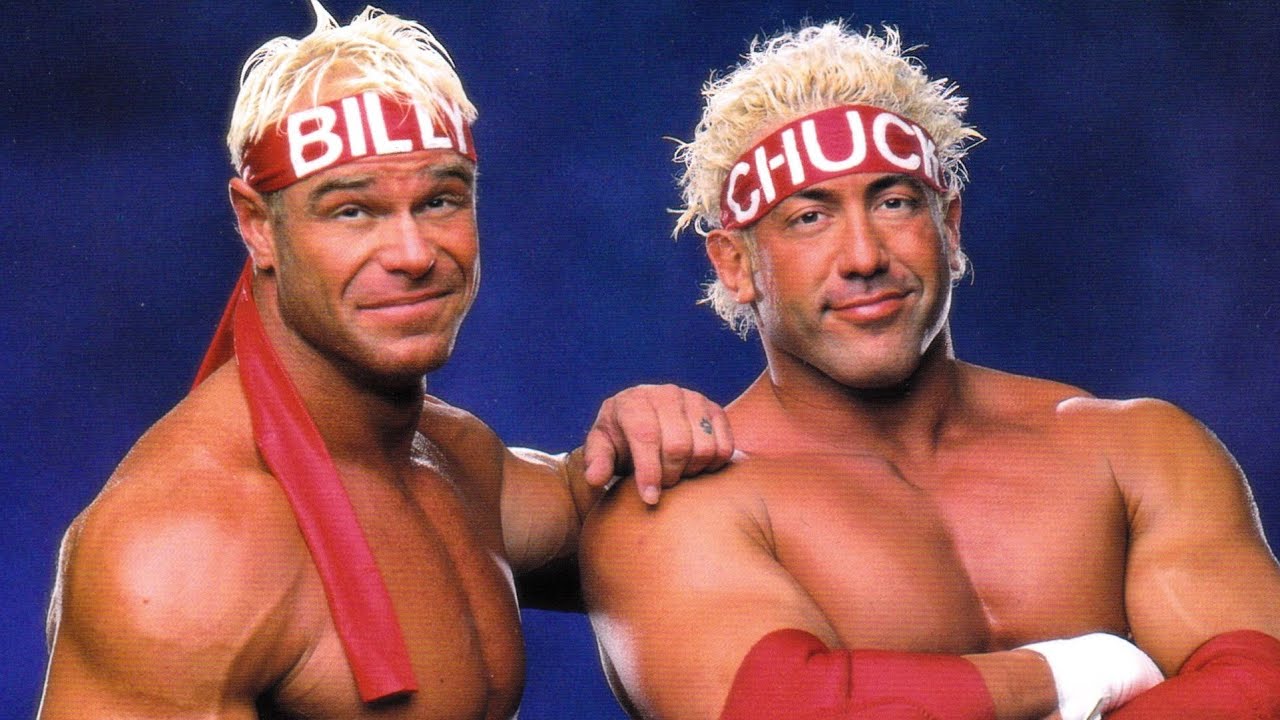 It was a storyline that led to a lot of media coverage for WWE and it was heavily criticized by the LBGTQ community when it ended.

While appearing on The Sessions with Renee Paquette podcast, the 58-year-old WWE Hall of Famer Gunn talked about the angle as well as the success they had as a team.

“So the ideal pitch was at that time we had all the Trish’s and the Stacey’s and all the super hot girls that just had everything they had makeup people they had, you know, they really didn’t wrestle they wrestled to rip their clothes off kind of thing. And it was hey, we have this idea that you guys are like divas. Like we’ll give you the hairdressers, the blow dryers and all that, it started like that.”

“Then it went, how about… I tell it like everybody goes ‘Well what was out about?’ and I go ‘It was awesome.’ You know, it was awesome. Because at that point in my career if you’re not, like I love challenging myself to do different things, right. And at that point in my career, I was looking for a challenge. Maybe not that I was looking for a challenge. But I wanted something to challenge me and to try to pull that off and make the WWE Universe think that I was gay is good, like, that’s really good.”

“So when they came and said ‘Okay, now we want you to do this…’ Literally, me and Chuck had like I was saying before, we had a conversation. ‘Hey, if we do this, we have to go all in, like we have to go [all in].’ Like it’s not going to be anything disgusting or raunchy, so we don’t have to worry about that. But I’m sure that we’re going to do some crazy things just to plant it in people’s minds. And we did. But we had to be on the same page. And we both had to be invested and we both had to do it 100% whether we fall flat on our faces or not.”

Gunn recalled a segment on the February 7, 2002 edition of Smackdown where Billy & Chuck had a Posedown with Torrie Wilson & Stacy Keibler, who were in bikinis. The segment featured Billy & Chuck trying to be more appealing than their blonde opponents. While speaking about that segment, Gunn said that it made him feel uncomfortable.

“Luckily, at first, the people were a little off kilter of what was going on, especially when I you know, did the thing in the ring and asked him to be my life partner. Everybody just went ‘Oh my god, what is wrestling? This is ridiculous.’ But the funny thing is about two to three months in, I think people realised holy cow, this is pretty good and they’re having a lot of fun.”

“We did this swimsuit thing with the girls where we did the pose. Oh my God, it was so, I will not lie, it was so uncomfortable. That was one of the things that we went, ‘Hey, this is this is a sink or swim,’ because we had to practise that, they made us do a little rehearsal. Every and I mean, it wasn’t just a few, they all came out, that was the most nerve wracking thing. It wasn’t so much doing the poses and how we were doing it, it was all the boys like, I think that place was full of there wasn’t one person in the back, they all wanted to watch.”

“But luckily for us, it worked. And we had fun and nobody took it that serious. This business is made to be fun, like it really is. Come on, like, really, you get paid to travel around the world and do something that you love. Like, how stressful can that be?”

“Yeah, some of the backstage and all that stuff and trying to jockey for position is too much, and I’ve never been into that. I’ve always just said, Hey, my work either speaks for me. And I do it that way. And I’m not gonna go in there and start doing all this politicking and jockey and stuff. It’s too much work for me. I’m having fun. I get a pay check every week,. I get to travel around the world, I get to act like a complete goof. Like where am I gonna find that job? Well, I’m not gonna find that job. So we were having fun.”

Billy went on to discuss how their performance was so good that it really got people to believe in what they were doing and it led to mainstream coverage for them.

“We were playing characters that were so outside of us, but people bought in, because it was like, holy cow they’re doing a really good job, so let’s get into this. So you know, so it was it was a lot of fun. It really was, and it was very challenging. And luckily, you know, Chuck was on board, and we pulled it off. And it was something that was really good.”

“I’ll tell you a funny story, Chuck had told me ‘Oh, my God, you’re not going to believe this.’ And I went what and he goes ‘We’re in Time magazine.’ I said ‘What do you mean?’ I open Time Magazine.”

“It went from us doing one thing, one night to being on Good Morning America, The Howard Stern Show, we did every news outlet there. So people were like wanting to know and they wanted to know what it was. And we just, you know, we did a good job of pulling it off. And it was fun. It really was.”

During the “commitment ceremony” on Smackdown, they had a memorable moment when Raw’s General Manager Eric Bischoff took off a mask to reveal that he was the Priest in the segment. That led to Bischoff’s 3 Minute Warning tag team attacking Billy & Chuck.

Billy Gunn currently works for All Elite Wrestling where his two sons, Colten & Austin Gunn, recently turned on him. Billy still wrestles sometimes and is also a coach for some of the wrestlers in AEW.

h/t Inside The Ropes