AEW Dynamite is moving to the TBS Network on Wednesday, January 5th and one of the biggest taking place that night will be an AEW World Title rematch between champion “Hangman” Adam Page and Bryan Danielson.

Hangman Page won the AEW World Championship for the first time in his career at the AEW Full Gear pay-per-view in November. That same night, Bryan Danielson won the finals of the World Title Eliminator tournament to earn an AEW World Title match. In the buildup to their title match, Bryan turned heel to counter the popular babyface champion Hangman Page.

The first AEW World Championship match between Hangman and Danielson was also Hangman’s first title defense. It took place at last week’s AEW Dynamite “Winter is Coming” episode. The match was a 60-minute draw that was an instant classic that was rated five stars (out of five) by TJRWrestling’s John Canton and also five stars by the Wrestling’s Observer’s Dave Meltzer. The draw meant that Hangman retained the AEW World Title, but it also meant that a rematch was coming. 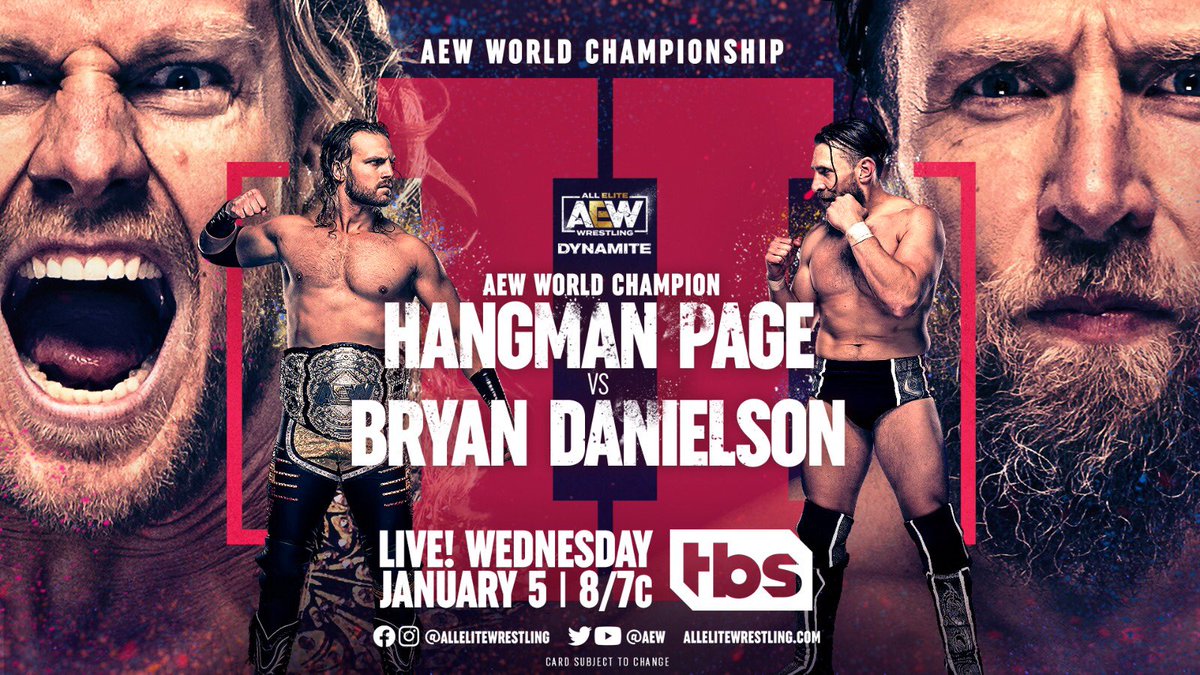 Last night on AEW Dynamite, Hangman Page was interviewed by Tony Schiavone in the ring when Bryan Danielson took it upon himself to interrupt. During the promo exchange, it was announced that Hangman would defend the AEW World Title against Danielson on Dynamite on Wednesday, January 5th. Hangman talked about how he thought of different stipulations for it, but it was Bryan’s suggestion that was approved. Bryan wanted to have judges (most likely three of them) at ringside because if the match goes 60 minutes again, then it would be up to the judges to determine who the winner is.

While Hangman accepted the terms by having judges present for the next AEW World Title match, he also said he has given way too much of himself for the World Title to have some old prick tell him he’s not good enough. Hangman said that if the question is can Hangman beat Bryan in less than one hour in two weeks then the answer will be yes.

Another likely match for the January 5th debut on TBS is the finals of the Women’s TBS Title tournament although that hasn’t been announced yet. Ruby Soho will be one finalist and she will face the winner of Jade Cargill vs. Thunder Rosa, which takes place next week on Dynamite. It would make sense to crown the first champion in a match that’s on TBS.

As for next Wednesday, December 29 on AEW Dynamite New Year’s Smash in Jacksonville:

* The return of Jim Ross.

In addition to that, AEW Rampage airs on Christmas night this Saturday with Sammy Guevera defending the TNT Championship against Cody Rhodes, Hook is in action and a whole lot more.