The fourth AEW Double or Nothing event will feature a huge AEW World Title match as “Hangman” Adam Page will defend the gold against the legendary CM Punk.

This will be the first time Page has wrestled Punk, who gets his first shot at the AEW World Title since he debuted in AEW last August.

During AEW Dynamite this week, Punk was on commentary for a match between FTR members Dax Harwood and Cash Wheeler. After the match was over, AEW aired a graphic letting the world know that Page vs. Punk is official for Double or Nothing in Las Vegas on May 29th.

Punk did a promo on Dynamite: “Ladies and gentlemen, I’ve never been part of a locker room that is full of more talent than here in AEW. Seven or eight months ago, before I walked through the curtain for the first time in seven years, I asked myself a question and the question was: ‘Can I still do this?’ And now I can probably stand here in front of my fans in Philadelphia and I can say: ‘Hell yeah, I can still do this.'”

Punk’s official record in AEW is 16-1 making him the top-ranked wrestler in AEW’s weekly rankings. Punk’s only loss was against Maxwell Jacob Friedman on the February 2 edition of Dynamite, but that was only because Wardlow helped MJF at a time when Wardlow was still an MJF ally. Punk got his win back when he beat MJF at Revolution. Clearly, Punk has earned this AEW World Title shot.

As for Page, he posted a message on Twitter on Wednesday noting that he was dealing with COVID, so he couldn’t make it to Dynamite this week: “Dynomite is tonight at 8pm on tbs but I will not be on there because my face is full of covid snot, sorry. please enjoy regardless.” We wish him the best in recovery from that.

Due to Page’s absence, part of Dynamite had to be re-written according to Dave Meltzer of the Wrestling Observer, who tweeted: “Tonight’s AEW show was heavily rewritten due to Page getting COVID.” What isn’t known is what role Page would have had on Dynamite. Page was not advertised for a match this week. 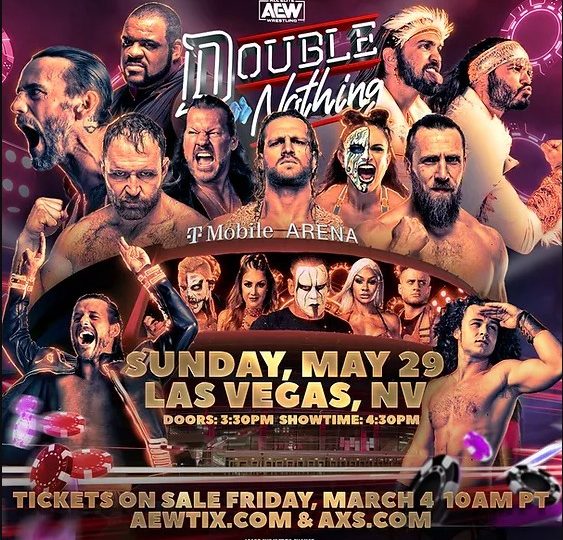 For more info on how to attend AEW Double or Nothing in Las Vegas, visit AEW’s website now.

Saraya Reveals Disguise She Used Ahead Of AEW Debut

Seth Rollins’ Gear At Clash At The Castle Inspired By “Rocketman”