The WWE Youtube channel team came up with an interesting video countdown ahead of this year’s Hell in a Cell Premium Live Event. Recently, they posted the Top 20 OMG Hell in a Cell Moments, so it’s time to check out their list.

What I’ll do is go over the list of twenty while proving some insight along the way. Just a reminder that this is not my list. It is in order that WWE posted on the Youtube clip, which I’ll post at the bottom.

Rollins had a tough time lifting Owens up, but then Rollins gave Owens a Powerbomb over the top rope that saw Owens crash through a table by the apron and then Owens went through another table that was on the floor. Brutal bump there!

This was at Crown Jewel 2021 in Saudi Arabia with Edge hitting The Stomp on a steel chair to pin Rollins to win the match.

The Undertaker and Rikishi were fighting at the edge of the cell. Undertaker got a hold of Rikishi and gave him a Chokeslam off the cell, which sent Rikishi back first onto the back of a truck that was full of hay. I thought this should be much higher. Yes, Rikishi had a soft landing on a truck full of hay, but it’s still a 400-pound man falling backward from about 15 feet. It’s not an easy bump at all. 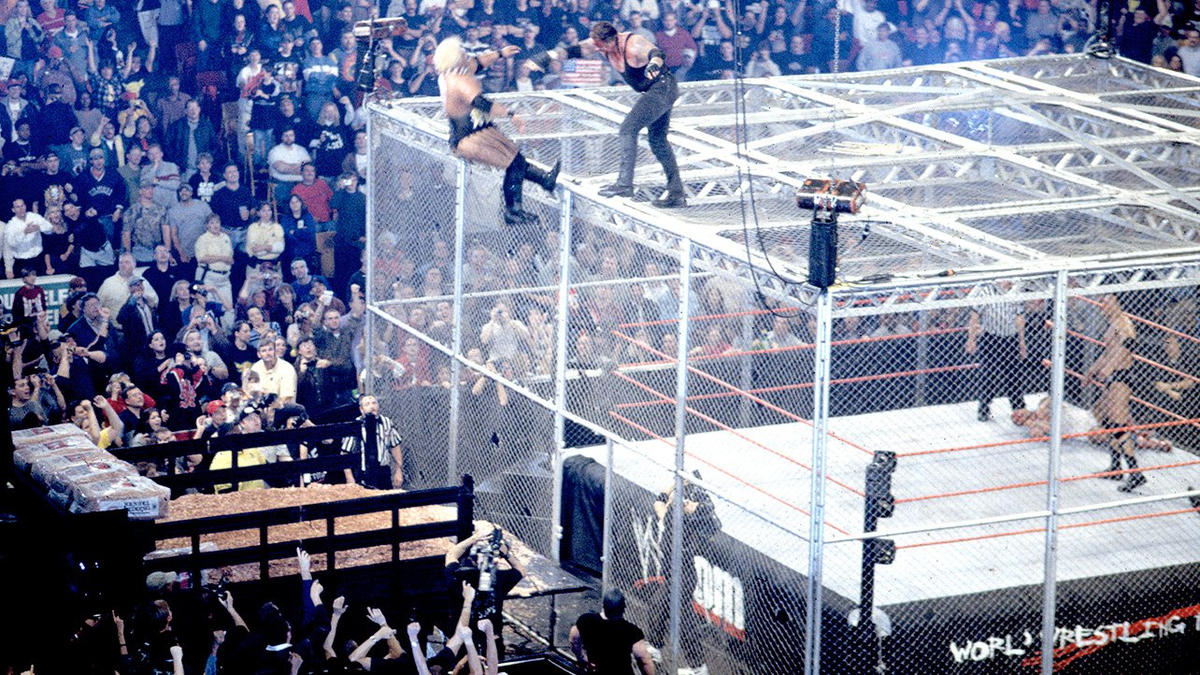 The Undertaker was about to give Kane a Tombstone Piledriver, but Kane’s “dad” Bearer used the urn to shine some light in Undertaker’s eyes to distract him. Bearer gave the urn to Kane and Kane hit Taker with the urn.

The Uso brothers Jimmy & Jey were on the top rope and they jumped off with a double splash on Xavier Woods, who was out in the ring with a chair on his chest. Jey covered Woods and The Usos became five-time tag team champions at that point.

There was a great World Title match going on inside Hell in a Cell between The Undertaker and Batista. When Undertaker was going for the pin, Edge pulled out the referee and revealed that Edge was dressed up as a camera guy at ringside. Edge hit Undertaker in the head with the camera to knock him out.

Shawn Michaels was about halfway up on the side of the cell during the first HIAC match at Badd Blood 1997. The Undertaker stomped on Shawn’s hands and that led to Michaels bumping off the middle part of the cell and crashing through the table. This was the biggest bump in WWE history when it happened. Yes, other bumps since then have topped this, but this was so huge and important at the time. I would put it in the top five easily.

Roman Reigns was destroying Jey Uso inside the cell and an injured brother Jimmy Uso went out to the ring to try to plead to Roman to stop. When it looked like Roman was sharing an emotional moment with Jimmy, Reigns slapped on the guillotine choke on Jimmy. When Jey saw what was happening, Jey said “I Quit” to put an end to Roman’s attack and the end of the match.

Bianca Belair was facing Bayley in a Hell in a Cell match. Belair picked Bayley up on her shoulders leading to Belair hitting the Kiss of Death (KOD) on Bayley onto a ladder. Belair got the pin there. Big bump by Bayley there to end the match.

Seth Rollins and Dolph Ziggler were not even in a Hell in a Cell match in 2018, but they still bumped off the cell. During the Roman Reigns-Braun Strowman match, Rollins and Ziggler were on the side of the cage near the commentary tables. They were ramming their heads into the cage, then they both looked down and basically took dives onto the tables below. I think the Shawn Michaels bump is better than this because it did not look as set up as this did.

I always thought this was a creative way to break the cage open. Edge took a running charge at The Undertaker with Edge jumping off the steel steps and giving The Undertaker a Spear through the cell. The cage that broke was against the barricade and the announce table, so it wasn’t too bad of a landing spot. If it was straight to the floor it would have hurt more.

This one scares me to this day. The Undertaker was on top of the cell with Mankind and they had a steel chair up there as well. For some reason, they thought it was a good idea to do a huge move from up there. Undertaker gave Mankind a Chokeslam through the top of the cell and into the ring with the hair following Mankind down there. It was absolutely brutal. JR: “Good God! Good God!” Lawler: “That’s it, he’s dead.” To me, this would be number one or two. It was such a scary, awful bump.

Mysterio jumped off the top rope, Reigns caught him and Reigns gave Rey a Powerbomb into the cell. It was an impressive move, no doubt about it, but I don’t see how it can be ranked higher than the one before it or some of the others.

It was the first women’s Hell in a Cell match and the first women’s match to main event a PPV. Charlotte was already on the ground, Banks was on the side of the cage, Flair got a hold of Banks and Flair delivered a huge Powerbomb through the commentary table at ringside. It’s not really a cell spot because it’s more of a table spot.

From No Way Out 2000 with Foley’s career on the line. Foley teased a move on the cell that was never going to happen, so Triple H did a back body drop, Foley went through the cell and went crashing through a gimmicked part of the ring. It was obviously smart to gimmick the ring and it’s still a huge fall for Foley to take in that spot.

The Miz and R-Truth managed to get into the ring with weapons lead pipes or some sort of objects in their hands. They attacked John Cena, CM Punk and Alberto Del Rio, who were the competitors in the match. Triple H ordered the cage door to be opened and Miz/Truth were arrested for it. Certainly a different kind of cell spot.

3. The Undertaker Chokeslams Edge Through The Ring (2008)

The first Hell in a Cell Match at Badd Blood 1997 saw the monster Kane debut with Vince McMahon shouting on commentary: “That’s gotta be Kane! That’s gotta be Kane!” Kane ripped open the cell door, then he went into the ring to confront his “brother” The Undertaker and set the ring posts on fire. Kane hit a kick to the gut and a Tombstone to Undertaker. Shawn Michaels, who was out of it, would wake up enough to roll over to get the pinfall win. An incredible debut for Kane.

Easy choice for number one and the right choice. Mankind and The Undertaker started the match on the cell. The Undertaker was in control up there, he got a hold of Mankind near the edge of the cell and threw him off the cell through the table below. It may be the most replayed spot of the Attitude Era or really any spot in wrestling history. We all know it. We all remember it well. The call by Jim Ross was legendary and the stories that have been told since then just make you appreciate what Mick went through that day. It’s crazy that it happened.

I made some comments about the order that I would change around. I’m very surprised that they didn’t include two Shane McMahon bumps. The first one was in 2016 against The Undertaker at WrestleMania 32 when he went crashing through the table while Undertaker moved. One year later in 2017, Shane tried a dive onto Kevin Owens, but Sami Zayn saved Owens from it and Shane went crashing through the table again. I would have included either of those moments on here. Maybe WWE wants us to ignore Shane? I don’t know.

The top three were good choices and I’d move up some others like Mankind taking the Chokeslam through the cell and Michaels bumping off the cell through the table.

It’s not a bad list overall. I like most of the choices. It was fun to re-live all those moments again.