Ah, Triple H. Even the mere mention of his name can elicit a myriad of responses like few other wrestlers in the history of the business.

On the one hand you have all the negatives that instantly spring to mind: master manipulator, political schemer, saboteur par excellence, backstage bully and an overrated talent who relied on others to get over.

Then the positives tend to trickle after: brilliant heel performer, adept at storytelling, fantastic at selling, at times possessing the physique of a Greek God, an iconic look and better at spitting water than any person in human history.

As a wrestler, most people either vehemently believe he’s either grossly overrated or severely underrated, but when it comes to Paul Levesque, there’s certainly no middle ground. Few are as complex to define.

However even by his most ardent critics, it can’t be denied that in the year 2000, Helmsley was at the apex of the wrestling business, and could legitimately call himself the best worker in North America for that 12-month period.

For perhaps the only time in his career, The Game’s in-ring work matched the WWE hype-machine. He genuinely was all of the things his character spewed out on TV.

Up until the turn of the millennium, Helmsley had continually underwhelmed as a performer. By mid 1999, he’d floated around the midcard for much of his tenure in the company, with the occasional dance with main event players such as Bret Hart and Shawn Michaels. 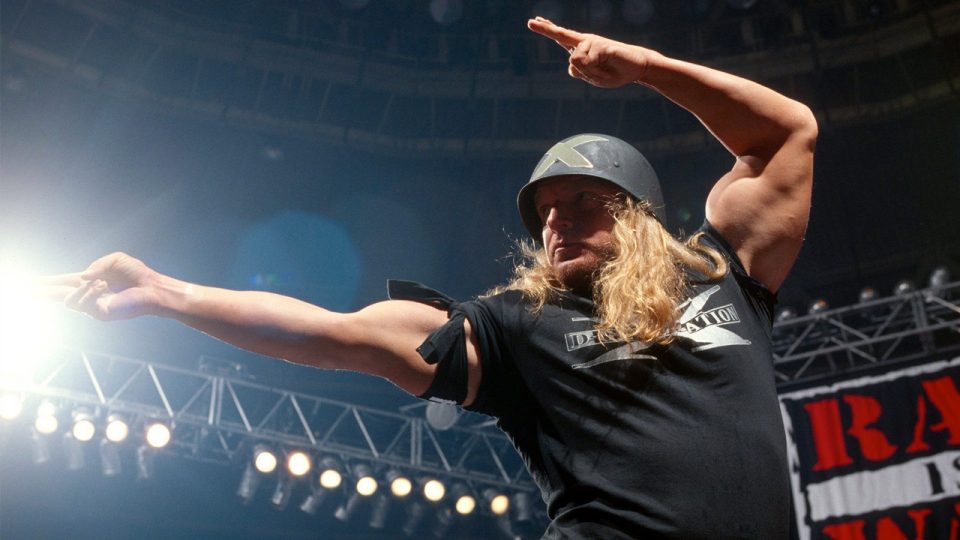 After taking over the DX reins from the injured Michaels on Raw after Wrestlemania 14, Helmsley only registered a single match of significant quality in 1998 and into the earliest part of the following year, that coming against The Rock in a ladder match at Summerslam 1998.

He could cut an entertaining promo, but he wasn’t taken seriously. At best, he was the light entertainment warm-up act until the likes of Steve Austin, Undertaker, Kane and The Rock appeared.

Even after turning heel at Wrestlemania 15 in the spring of ’99 and receiving a major push, Helmsley still flattered to deceive, to such an extent that it’s long been reported that Austin refused to put him over in the main event of Summerslam ’99, hence the insertion of Mankind as a transitional champion.

His first and second title reigns were anything but memorable. Losses to Vince McMahon on an episode of Smackdown and Big Show at Survivor Series 1999 hardly set races pulsing. Despite by now possessing ‘The Game’ moniker that emerged from an excellent shoot/work promo with JR before Fully Loaded 1999, Helmsley was still lacking something; that certain career defining moment that cements all top players.

After the 20th century made way for the 21st, he was finally to find it – via the masochistic altruism of Mick Foley. 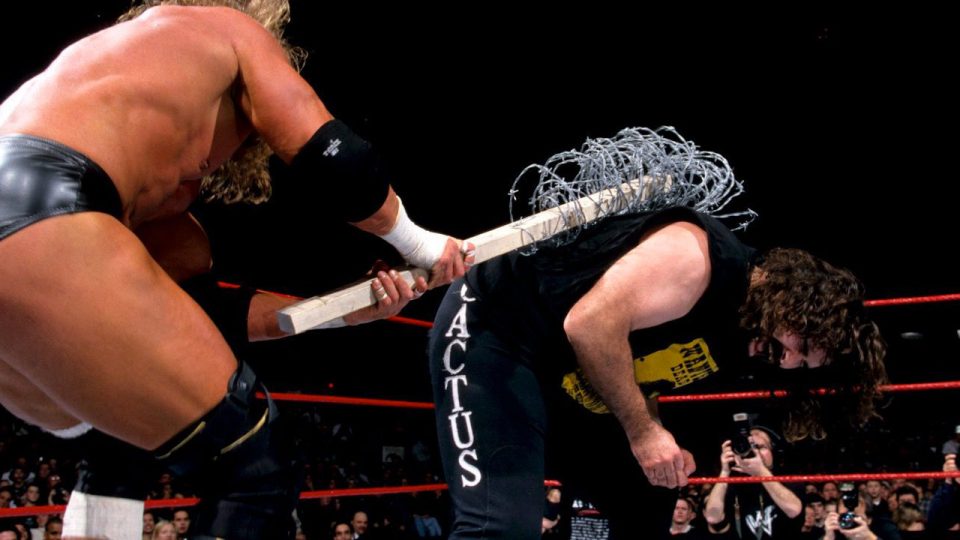 Foley, sensing that the New Hampshire native was struggling to win over the audience as a legitimate main eventer, sought to correct that by entering into a final feud with his long-time rival. Foley’s aim was twofold: to transform Helmsley into a ruthless monster, but in addition to retire not as the comedic half of the Rock n’ Sock connection, but as the serious performer he was before all of that.

The street fight at the 2000 Royal Rumble was Helmsley’s crowning moment, a true watershed moment by his own admission. With Austin and Undertaker on the shelf and Foley enjoying the final moments of his Indian summer before retirement, the 30-year-old realised that this really was his time (no pun intended) to grab the proverbial brass ring. And as he and Foley produced an instant classic in Madison Square Garden, grasp it he did. Main event status solidified.

Levesque’s third title reign was arguably the finest of his 25-year career in the WWF/E. Having won the belt back from The Big Show on the January 3rd episode of Raw, Helmsley became the first heel to ever retain in the main event of Wrestlemania, in the process breaking tradition.

The reign included another memorable encounter with Foley at the No Way Out PPV in an underrated Hell in a Cell match, and the legendary episode of Raw on April 16th where he lost the title to Chris Jericho, before being reinstated as champion due to an Earl Hebner fast count.

Helmsley was not just the WWF champion, but he was undoubtedly now the best worker in the company by the time he lost the strap to The Rock at Backlash in late April. Previously known as having plodding matches that lacked intensity, Levesque had drastically quickened the pace of his matches, and improved technically. He’d also developed the sort of chiselled physique that gives McMahon goose bumps.

Furthermore, he’d refined his skills on the mic (being afforded 20 minutes at the start of every Raw and Smackdown to cut a promo will inevitably do that). Slowly but surely, Levesque put all of the various ingredients together to become the total package (pun intended). He was now viewed as a ruthless heel, who would go to any length to get what he wanted and cause undue carnage in the process. 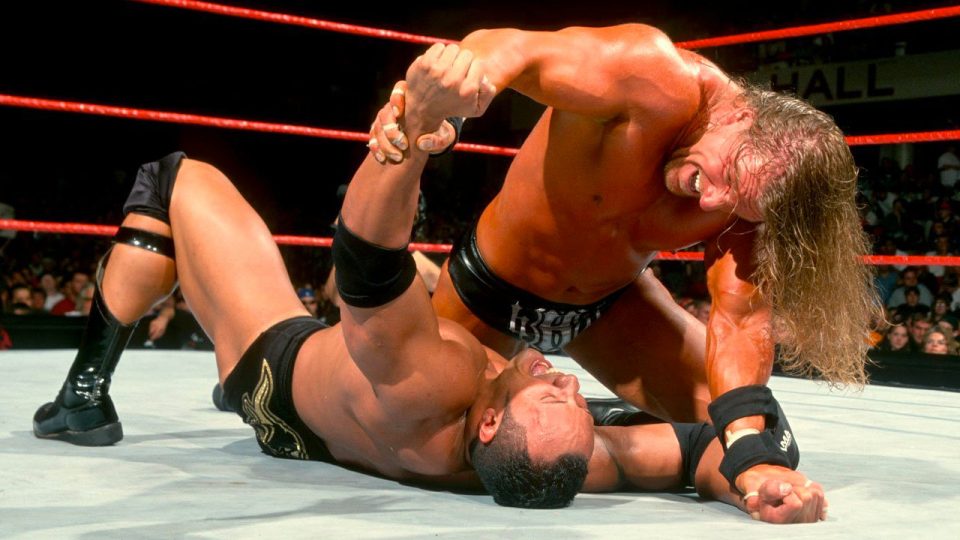 Helmsley would transition into a feud with arch-rival The Rock in the spring and early summer, winning the belt back at Judgement Day in an enthralling Iron Man Match that saw a returning Undertaker inadvertently cost Rock the championship. His fourth reign would last all of a month, losing it at King of the Ring without getting pinned in a poorly-conceived six-man tag involving Vince and Shane McMahon, Rock, Undertaker and Kane.

A measure of how far Helmsley had come in the space of a year was evident when he was tasked with elevating Chris Jericho into the upper echelons of the card at that year’s Fully Loaded. The pair stole the show at the PPV in a last man standing match that he won barely won, with Helmsley getting up at the nine count before collapsing again in a bloody heap.

Helmsley was now capable of pulling a good match out of almost anyone on the roster and, crucially, didn’t possess the excessive degrees of backstage stroke he would later attain to crush anyone he felt threatened by. At this stage in his career, he was knocking it out of the park on a daily basis.

The feud/love triangle with Kurt Angle and Stephanie McMahon dominated TV time going into Summerslam (to such an extent that The Rock, the WWF champion, was an afterthought). The storyline was executed wonderfully and Helmsley demonstrated his range as a performer outside of the ring in multiple backstage segments every week.

An early sign of the politicking that would become infamous in later years reportedly emerged going into the Unforgiven PPV, however.

The love triangle was to come to a conclusion with on-screen wife Stephanie turning on her husband and aligning with Angle. However Helmsley put the kibosh on this, arguing that in reality a woman like Stephanie would never pick Angle over Helmsley (this despite the fact that Angle would make short work of Helmsley in a legitimate fight, and HHH isn’t quite the irresistible stud he no doubt sees in the mirror).

Thus, the soap opera storyline ended on a damp and confusing note, with Stephanie turning on Angle and Helmsley picking up the win. Further evidence of the nonsensical finish at Unforgiven came in the coming weeks of television when Angle was named number one contender to Rock’s title anyway, and Stephanie arranged a (platonic) deal to manage Angle heading into the big championship match. It was obvious that the Angle/Steph duo were at one point set to ride into No Mercy on a red-hot streak, had H’s insecurities not flared. 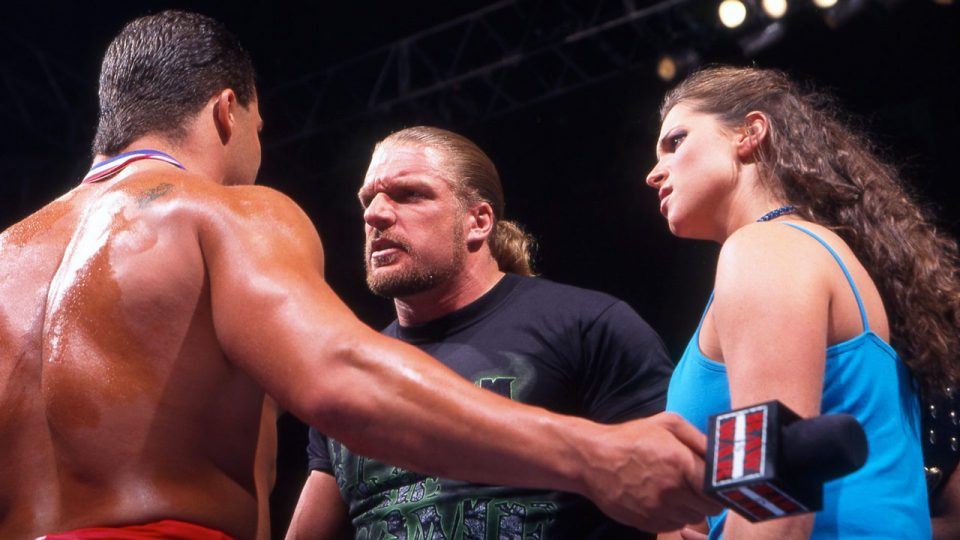 A short face turn in October gave way to once more turning monster heel, when he revealed that it was he who masterminded the hit and run on Austin the previous year. Whilst the attempt to push Rikishi as a monster heel was laudable, it made little sense, and it should’ve been Helmsley from the start.

The Smackdown promo in which he outlined why he had Rikishi run over Austin was one of the best of his career, in part because most of it was laced with elements of truth. Helmsley had not only risen to the top in Austin’s absence, but had dominated the landscape in the subsequent 12 months. No wrestler had gained more from Austin’s forced absence than Helmsley.

The only other beneficiary was The Rock, but he’d already certified his main event level status by the time Austin was forced to vacate his crown as the golden goose. Helmsley on the other hand, still had work to do. He would finish out the year feuding with Austin and would return to the title picture, with his involvement in the convoluted six-man Hell in a Cell match at Armageddon.

“It was a banner year for Triple H, everything came together for him in 2000,” said JR recently on his Grilling JR podcast. Indeed, Helmsley won the Wrestling Observer Newsletter’s ‘Wrestler of the Year’ award for 2000, in addition to winning feud of the year with Foley. PWI magazine named him as the best wrestler in their PWI 500 series for 2000.

Helmsley’s 2000 could be put up alongside Hulk Hogan’s 1984, Bret Hart’s 1997 or Austin’s 1998 and it wouldn’t look out of place. Perhaps not in terms of drawing power (Jim Cornette maintains that he was “the guy who always worked opposite the guy”), but for the quality of output and his importance as the perfect, loathed foil for Rock and Foley, not to mention his ability to raise Jericho, Angle and Benoit to the next level (even if he did end up ensuring all three fell straight back down soonafter).

So what happened? Where did this Helmsley go?

His 17-month stint as a world-class wrestler essentially ended the minute he tore his quadricep on the May 21st episode of Raw in 2001. Levesque was noticeably bigger upon his return eight months later in January 2002, so preposterously huge that his muscles seemed to have muscles.

This, in addition to the severity of his injury, took all of the dynamism out of Helmsley’s matches, and he returned to the lethargic displays that blighted his reputation pre-2000. At the age of 31, Helmsley’s peak was over.

Helmsley’s physical condition – whilst the largest contributor – wasn’t the only reason for his decline in the following years.

By the time of his return, his political influence had increased exponentially, and Helmsley openly mocked wrestlers he was programmed with that didn’t meet his approval. The ‘reign of doom’ saw the likes of RVD, Booker T, Goldberg and even Kane become victims to Helmsley’s insatiable ego.

No longer willing to elevate wrestlers to the next level that he didn’t handpick, post-surgery Hunter would really hammer home just how crucial those supporting players were to his success – and for two years, he burned them all to the ground.

Despite dominating Raw every single week for what seemed an eternity, Helmsley’s match quality was continually poor, and could only reach his 2000 zenith when working with a HBK or Benoit, two superlative workers whose respect from the fans could not be diluted by HHH’s games and who would carry the lion’s share of the load.

Such was the disdain towards Helmsley from wrestling fans, he was voted the Wrestler Observer Newsletter’s most overrated wrestler for three years running (2002-04). Quite the downfall.

Despite the WWE hype-machine’s best efforts and his own illusions of grandeur, time hasn’t been kind to Helmsley’s body of work, and his reputation never recovered from the shenanigans of the mid-‘00s. Yet despite that, it should be remembered that for a single year in 2000, Helmsley was indeed ‘The Game’, and he was as every bit as good as he claimed to be in his promos.

At the turn of the millennium, he was that damn good.

This article was originally written by Emmet Gates.

TJRWrestling AEW Double or Nothing 2022 Preview

TJR: Addressing MJF’s Status With AEW Ahead of Double or Nothing Amid Reports of Unhappiness