Welcome back TJR readers! Did you spend all day Friday trying to figure out how many more Greek letters there are, and missed WWE Smackdown?

Perhaps you spent all day Monday getting over a “rough night” and missed Raw. Worry not for I have returned with another edition of the Top Ten Wrestling Stories of the Week.

Most weeks in wrestling news are just like weeks in the regular news, filled with negative news stories. That is why I wanted to start this week off with something positive. This week on Instagram, WWE Hall of Famer Hacksaw Jim Duggan revealed that he has beaten cancer for a second time. Duggan had revealed on Twitter on that he was diagnosed with prostate cancer last October, with him undergoing surgery on October 20th. This is the second time Hacksaw has beaten cancer, as he also beat kidney cancer twenty years ago. Defeating cancer twice is no small feat and shows that Hacksaw truly is a “Tough Guy”. (TJRWrestling)

Mark Henry decided to leave the Salmon colored jacket at home this time. Henry appeared on I95’s Large Dave radio program and was asked if he would get back in the ring. Henry responded by saying “HA HA HA HA HA HA! I mean, Man, you made me laugh, I’m not getting back in there! If somebody hits me, I’m callin’ the police!” Henry has not competed in a match since the Greatest Royal Rumble Match that took place in Saudi Arabia in April of 2018. Henry left WWE to join AEW this past May, and has been used in a commentary role with the company. Henry’s legacy may not be done in the ring completely however, as his 21 year-old-son is said to be quite a hand himself.

One of the most influential wrestling federations of the last twenty years will cease to exist as we know it after Saturday. This Saturday night ROH will hold their last PPV titled Final Battle at 7 PM ET. The final match of the evening was going to see ROH World Champion Bandido defend his title against Jonathan Gresham. Unfortunately, Bandido is dealing with Covid-19, with a replacement yet to be announced. After this event, ROH will be taking a hiatus, with them hoping to return in April. When they do return it will be a different show, as they have officially released their entire roster. As a fan of ROH since its first show, I hope the revamp is a success, and that ROH 2.0 doesn’t feature rainbow colors and 60 superstars I have never heard of. (ROHWrestling) 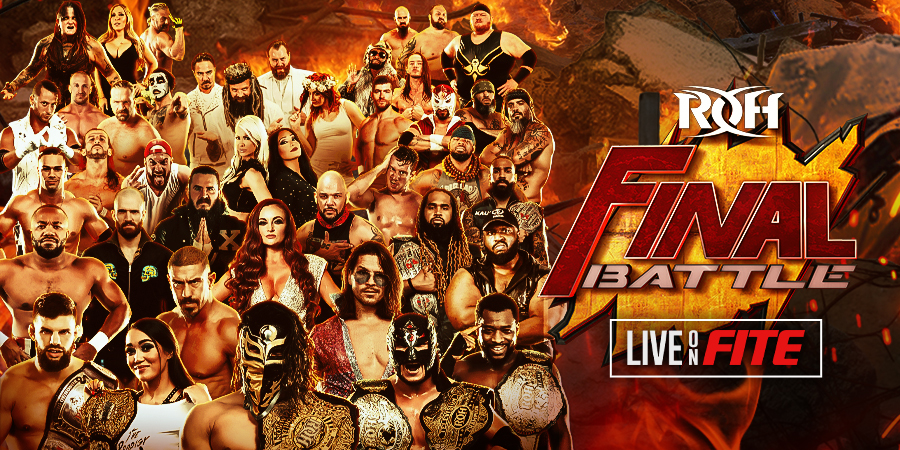 WWE has wasted no time in recruiting college athletes to its new NIL program. The Next in Line program was announced last week as a way to recruit and develop future WWE talent. The program was made possible via NCAA’s new policy that allows athletes to monetize their name, image and likeness. WWE signed 15 athletes this week to the program from 13 different universities. These athletes joined Olympic Gold Medalist Gable Stevenson as the first recruits for the program. Personally, I wish this program was around when I was in college because I would have been a shoe-in after being an All-American Beer Pong Player. (WWE)

.@WWE's inaugural "Next In Line" class is here. Hailing from 13 universities, 7 @NCAA conferences, and 4 sports, these 15 college athletes will have access to a variety of #WWE resources to potentially earn a contract upon completion of the #WWENIL program. https://t.co/7eIkCsvfMf

Edge will be starting off 2022 with a familiar opponent. This past week on Raw The Miz invited Edge to appear on MizTV. During the segment, The Miz challenged Edge to a match at Day One on January 1st. This will actually be the fourth time that Edge and The Miz have wrestled on television, with Edge winning all three of their previous matches way back in 2011. It would seem that Edge would be the favorite in this bout, but it must be taken into account that the previous three matches were before The Miz had his extensive career as a Marine. (TJRWrestling)

We lost a WWE Hall of Famer this week. John Lanza, better known as Blackjack Lanza, passed away this week at the age of 86. Lanza is best known for being a part of the legendary tag team The Blackjacks with partner Blackjack Mulligan. After retiring from in-ring action in the 1980s, Lanza continued to work with the WWE as a backstage agent all the way through the Attitude Era. Lanza, along with his partner Mulligan, were inducted into the WWE Hall of Fame in 2006. I personally would like to send my condolences to all of Lanza’s friends and family. (TJRWrestling)

Our hearts go out to the family and friends of Jack Lanza. He was a man’s man, respected and beloved by all. He worked for and loved WWE for many years. His loyalty and dedication will never be forgotten.

One of the greatest NXT superstars ever is reportedly done with the company as of today. Johnny Gargano’s contract is reportedly set to expire, with him not planning on re-signing. Gargano is already his PWTees store opening up. Gargano will reportedly not be leaving alone, as Kyle O’Reilly’s contract will be expiring as well. Both Gargano and O’Reilly suffered losses on the show, with O’Reilly and Von Wagner falling short of capturing the NXT Tag Team Championship from Imperium and Gargano’s ‘Team Black and Gold’ losing to Team 2.0 in WarGames. O’Reilly then proceeded to lose to Von Wagner in a cage match on NXT 2.0, while Gargano seemingly gave a goodbye speech before being attacked by Grayson Waller. So far nothing has been made official for either man, but it does appear that Shahid Khan will be picking up a few extra stocking stuffers this year. (TJRWrestling)

Roman Reigns will be starting the New Year with a difficult challenge. This past Friday on Smackdown, Brock Lesnar gave a promo to let everyone know he was back to recapture the Universal Championship. Sami Zayn then interrupted Lesnar, to let him know he was the number one contender for the Universal Championship. Lesnar then convinced Zayn to challenge Reigns for the title in the main event of the show. Then before that match could take place, Lesnar attacked Zayn. Reigns then easily defeated Zayn, to keep his title. Lesnar and Reigns will now face each other for the Universal Championship at Day 1 on Saturday, January 1st. Interestingly when Lesnar competes on January 1st he will have already made more money for the year than most of the roster will in all 2022. (TJRWrestling)

2. AEW Winter is Coming to Take Place This Wednesday

This Wednesday’s edition of Dynamite should be a special one. This upcoming Dynamite will be the annual Winter is Coming special. The show will be headlined by the much anticipated World Championship Match between champion Adam Page and challenger Bryan Danielson. Danielson is undefeated so far in AEW, and lately has been defeating every member of The Dark Order one by one. As for Page, this will be his first title offense since capturing the belt on November 13th at Full Gear from Kenny Omega. This match and show should be special not only because of the main event, but because for the first time in 40 years of living in Central, NY I am excited that Winter is Coming. (TJRWrestling)

Jeff Hardy was released by the WWE this week. Earlier in the week, it was reported that Hardy was sent home from the current WWE Live Event Tour, after suffering what was being called a “Rough Night.” The incident occurred during an event on December 4th in Edinburg Texas. Hardy was part of the main event, teaming with King Woods and Drew McIntyre to take on The Bloodline in a six-man tag team match. During the match, Hardy reportedly appeared “sluggish” while in the ring. After Hardy tagged out of the match, he proceeded to leave through the crowd while the match was still going on. Hardy was scheduled to compete in the same match the following night in Corpus Cristi, Texas, but was replaced by Rey Mysterio. Then yesterday it was reported that Hardy was released from the WWE after refusing to go to rehab. Whatever issues Hardy is facing I hope that he is able to overcome them and find happiness in his life. (TJRWrestling)

That will conclude another edition of The Top Ten Wrestling Stories of the Week. Thank you for taking the time to read this each week. Although I often joke, I have recently started refereeing with NYCW and respect more than ever what wrestlers do every week. I wrote an article all about it all right here. If you like what I do, despite my jokes being almost as bad as shopping in the mall in December, then feel free to listen to my brand new podcast The Smark and the Noob and follow me on Twitter @Fowlerwrestlin1 as well.