Welcome back TJR readers! Did you spend all day Friday trying to figure out how long it takes to thaw a 20-pound turkey, and missed WWE Smackdown? Perhaps you spent all day Monday trying to pawn a giant golden egg and missed Raw.

For the first time in 765 days, Kenny Omega is not a World Champion. It was announced this week that Omega has vacated the AAA Mega Championship. A fatal-five way will now be held at AAA’s next big event on December 4th titled TripleMania Regia. So far Hijo del Vikingo, Samuray del Sol (former WWE superstar Kalisto) and AEW Superstar Jay Lethal have all been announced for the match. Omega had to vacate the title due to needing several surgeries, which Dave Meltzer has already preemptively rated 5-stars.

After over eight years in the WWE, Dana Brooke is finally a champion. This past Monday on Raw, Cedric Alexander defeated Reggie to capture the 24/7 championship. After the match, a group of superstars including Brooke rushed to the ring to try to take advantage of the 24/7 rule. Brooke was able to hit a top rope neckbreaker on Alexander, and pin him to capture the title. Brooke then celebrated her win, and left Raw as the champion. (TJRWrestling)

Randy Orton reached a huge milestone this past Sunday at Survivor Series. Not only did Orton and his tag team partner Riddle defeat The Usos, but it was also Orton’s 177th PPV match. One hundred seventy-seven PPV matches officially broke the previous record of 176 held by Kane. Interestingly, Orton is also very close to breaking the record for the most Raw matches ever, which is also currently held by Kane. We will have to wait and see if Orton can also break Kane’s record of having the most former girlfriends’ corpses that were molested. (TJRWrestling)

I’ve never been one to keep records or stats throughout my career. Early on, it was laughable to consider in my profession you had ‘wins’ and ‘losses’. You certainly wouldn’t talk about it, with the boys much less fans. But I’m fortunate to have some fans (and friends)

WWE remembered that they have Women’s Tag Titles this week. This past Monday on Raw, Queen Zelina and Carmella defeated Nikki A.S.H. and Rhea Ripley to become the new WWE Women’s Tag Team Champions. This is the first title in the WWE for Queen Zelina, who clearly has been getting a push lately. Zelina and Carmella will now defend against all the other women’s tag teams, as soon as WWE decides to make some.

The Rock may have not appeared at Survivor Series, but promotion for his new Netflix movie Red Notice certainly did. This past Sunday at Survivor Series, Vince McMahon appeared with Cleopatra’s Golden Egg from the movie, that he said was gifted to him from The Rock. The egg was then mysteriously stolen, with McMahon stating that whoever helps find it will get a WWE Championship Match. The next night on Raw, both Smackdown and Raw superstars were ordered to appear so they could track down the egg thief. Eventually, it was revealed that Austin Theory stole the egg to take a selfie with it, with Theory actually getting the title shot. Sami Zayn was on hand to complain about it. Theory then went on to lose to WWE Champion Big E later in the night. It was a good thing that the egg was found because it was reportedly worth $100 million or about 80 wrestlers’ salaries. (TJRWrestling)

Can’t wait to get another with Mr. @VinceMcMahon and the @WWE championship!!! #WWERawpic.twitter.com/PCK1FAmBTp

AEW clearly has no plans to coast to the end of the year. On December 15th, AEW will hold a special edition of Dynamite titled “Winter is Coming”. AEW actually held a “Winter is Coming” last year as well, with Kenny Omega defeating Jon Moxley for the AEW World Championship. AEW did not stop there however, as they also announced the first “Battle of the Belts” special will air on Saturday, January 8th. This will be the first of four “Battle of the Belts” which will be similar to WCW’s old Clash of the Champions specials. With all of these big events, AEW fans are almost as excited as John Canton was when Mandy Rose noticed him on Twitter this week. (TJRWrestling)

A number of big matches were announced on NXT 2.0 for their NXT: War Games special on December 5th. It was announced that it would be Kay Lee Ray teaming up with Raquel Gonzalez, Io Shirai and Cora Jade in a women’s WarGames match. They will face the team of Dakota Kai and the Toxic Attraction trio of NXT Women’s Champion Mandy Rose as well as the NXT Women’s Tag Team Champions Gigi Dolin & Jacy Jayne. Also, a Hair vs. Hair Match will take place with Cameron Grimes and Duke Hudson putting their hair on the line. Roderick Strong will also be putting his NXT Cruiserweight Championship on the line against Joe Gacy. It was also announced that NXT Tag Team Champions Imperium (Marcel Barthel & Fabian Aichner) will be facing the winners of next week’s match between Legado Del Fantasma (Joaquin Wilde & Raul Mendoza) and Kyle O’Reilly/Von Wagner.

Finally, the Men’s War Game Match was also announced with Tommaso Ciampa, Johnny Gargano, Pete Dunne & LA Knight going against Carmelo Hayes, Tony D’Angelo, Bron Breakker & Grayson Waller. Interestingly Gargano’s contract with NXT reportedly expires on December 10th, meaning this may be his last appearance for NXT. We shall have to wait and see if Gargano chooses to re-sign with NXT, or if Tony Khan is going to be Taking Over his father’s checkbook again. (TJRWrestling) 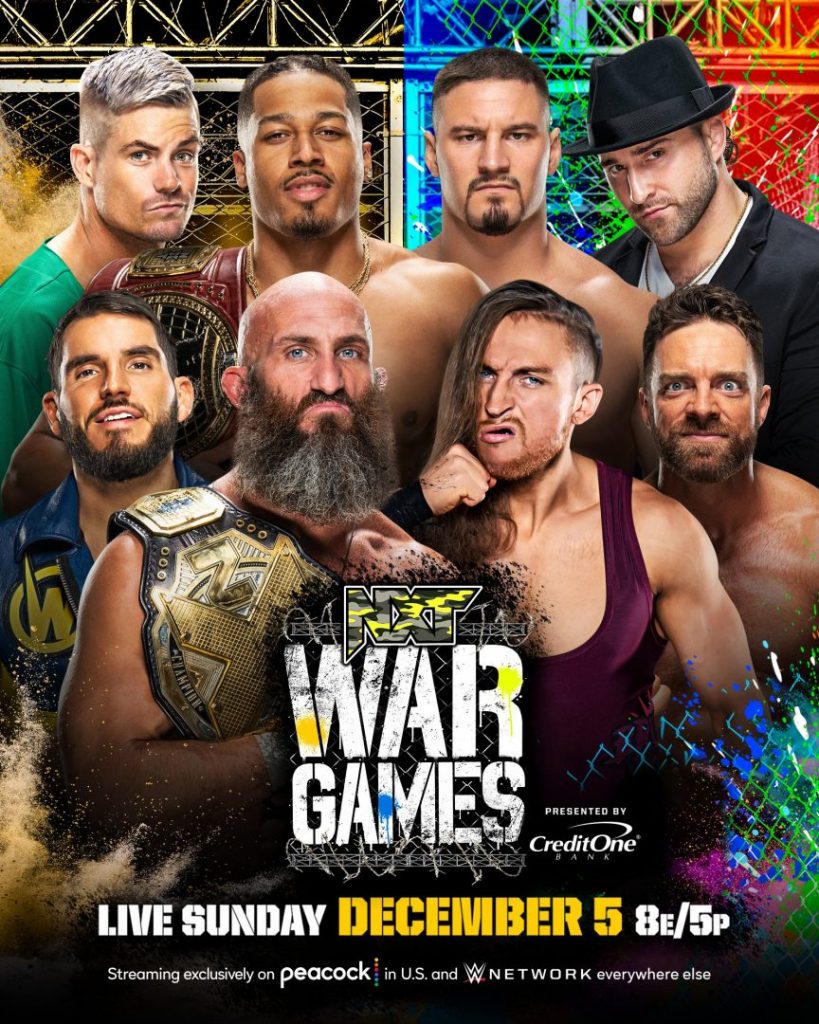 Normally two wrestlers talking in the ring is by no means news, but there is nothing normal about MJF and CM Punk having a promo battle. This past Wednesday’s Dynamite opened with both MJF and Punk giving a master’s class on promos. The epic promo battle ended up going almost 20 minutes with WWE superstars John Cena, HHH and The Miz all being referenced. Punk and MJF never laid a finger on each other during the segment, but without question stole the show with their words. We will have to wait and see if Punk and MJF can keep this level of anticipation once the bell rings, but so far this feud has bombed.

The biggest prize in all of wrestling was won by the Raw brand this year. This past Sunday at Survivor Series, Raw beat Smackdown in the head-to-head matches by a total of four wins to Smackdown’s two, to claim Brand Supremacy. The only two victories that Smackdown got all night were Intercontinental Champion Shinsuke Nakamura defeating United States Champion Damian Priest by DQ (on the Kickoff Show), and Universal Champion Roman Reigns defeating World Champion Big E. What’s interesting is Raw has won Brand Supremacy every year since the Brand Split in 2016. What’s also interesting is that people cared just as little in 2016 as they did this year. (TJRWrestling)

As a fan of professional wrestling for over 30 years, I have found most fellow wrestling fans to be laidback, nice people. Unfortunately however, there are exceptions and there are some morons as well. One of those morons decided to jump the barricade at Raw this week and attack Seth Rollins. The idiot was quickly apprehended by security, and is currently facing criminal charges. Normally I would now remind everyone how stupid it is to jump the guardrail, but since you are smart enough to be a reader at TJRWrestling, you are way too intelligent to do something that idiotic. (TJRWrestling)

A fan angle of the Seth Rollins/fan encounter on #WWERaw.

That will conclude another edition of The Top Ten Wrestling Stories of the Week. Thank you for taking the time to read this each week. Although I often joke, I have recently started refereeing with NYCW and respect more than ever what wrestlers do every week. I wrote an article all about it all right here. If you like what I do, despite my jokes being almost as bad as fans jumping over the guardrail, then feel free to listen to my brand new podcast The Smark and the Noob and follow me on Twitter @Fowlerwrestlin1 as well.