Welcome back, TJRWrestling readers! Did you spend all day Friday calling fired wrestlers, and missed WWE Smackdown? Perhaps you spent all day Monday having chills that multiply and missed Raw. Worry not for I have returned with another edition of the Top Ten Wrestling Stories of the Week.

Before I begin the top ten list this week, I would like to give my condolences to the friends and family of Judo Gene LeBell, who passed away at age 89. LeBell was known as “The Godfather of Grappling” and was a huge influence to Bryan Danielson, Ronda Rousey as well as countless more. LeBell truly is a legend of both professional wrestling and MMA and should be a Lock for any Hall of Fame.

10. Solo Sikoa Out With an Injury

NXT is going to have to do without one of its biggest rising stars. This week on NXT 2.0, Solo Sikoa was shown backstage being treated by medical personnel. It was announced that Sikoa had suffered a sprained PCL, and would likely miss 4-6 weeks of action. Sikoa expressed anger about the diagnosis, stating that “I can’t sit out that long, man.” Sikoa is the younger brother to The Usos as well as the cousin of Roman Reigns, meaning that while out with an injury he will likely still win several matches. (TJRWrestling)

The teams that will compete to crown the inaugural AEW Trios Champions were announced this week. Death Triangle are set to face Will Ospreay and Aussie Open. The House of Black will face off against The Dark Order. Also, the newly-formed Trustbusters will take on Best Friends. Finally, Andrade El Idolo, Dragon Lee and Rush will face the Young Bucks and a mystery partner. It is being speculated that Kenny Omega may make his long-awaited return to team with the Bucks. We will have to wait to see if this rumor is true or if Omega is going to wait until next month’s tournament to make his return.

We need a partner… pic.twitter.com/8nGQE3Kwxa

8. Bryan Danielson to Face Daniel Garcia in a Two-Out-Of-Three-Falls Match

Bryan Danielson will get a chance to revenge his shocking loss to Daniel Garcia. This coming Wednesday on AEW Dynamite, Danielson and Garcia will face off in a two-out-of-three-falls match. Danielson and Garcia recently faced each other on the July 27th episode of Dynamite, with Garcia shockingly getting the win. Wednesday’s Dynamite is being called “House of the Dragon” to help advertise the upcoming Game of Thrones sequel of the same name. Hopefully, George R.R Martin is not writing the Dynamite script, or the show may not be finished until 2027. (TJRWrestling)

Liv Morgan will have a new challenger for her WWE Smackdown Women’s Championship. This past Friday on Smackdown, a seven-woman gauntlet match was held to decide who would face Morgan at Clash at the Castle on September 3rd. In the end, Shayna Baszler was able to pin Raquel Rodriguez to get the win. Baszler is a former two-time NXT Women’s Champion as well as a two-time WWE Women’s Tag Team Champion, but has not held the Women’s World Championship on either Raw or Smackdown. As for Morgan, she did not have a good night on Smackdown, as she was booed by part of the crowd during her promo. Luckily for Morgan, she should be treated better in Europe, as they respect anyone who has ever been involved in a Riott Squad. (TJRWrestling)

The Women of the WWE are going to have to now do a lot more than grab the Women’s Tag Team Championships off a desk. This past Monday on Raw, a tournament began to crown new WWE Women’s Tag Team Champions. In the first match of the tournament, Dakota Kai & IYO SKY defeated Dana Brooke & Tamina. Alexa Bliss & Asuka vs. Nikki A.S.H. & Doudrop, Raquel Rodriguez & Aliyah vs. Xia Li & Shotzi and NXT superstars Nikkita Lyons & Zoey Stark vs. Natalya & Sonya Deville are the rest of the matches in the tournament. Former champions Sasha Banks and Naomi were not announced for the tournament, perhaps because with the inclusion of Nikkita Lyons, they felt the tournament had enough ASSets. (TJRWrestling) 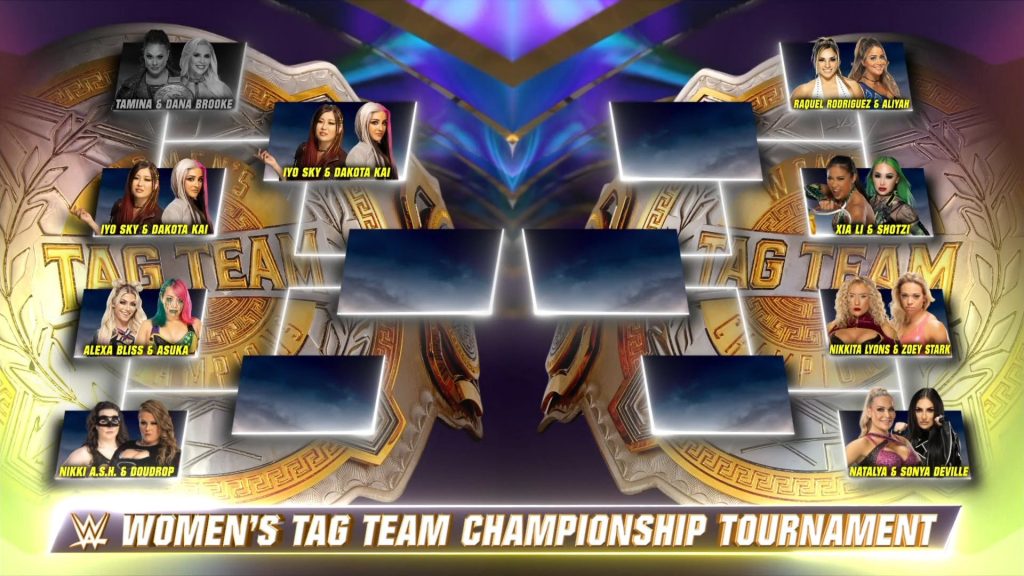 The news got even worse for Vince McMahon this week. An SEC filing this past Tuesday revealed that WWE discovered two more payments totaling $5 million dollars. These payments were reportedly not “Hush” money, but instead were payments to the Trump Foundation. These payments were made in 2007 and 2009. This brings the total amount so far discovered that Vince McMahon paid out to an incredible $19.6 million. McMahon of course recently retired from the WWE, with these allegations being the main reason for him doing so. If there is a silver lining to all of this for McMahon it may be that if he does go to prison he could share a cell with his Battle of the Billionaire’s opponent. (TJRWrestling) 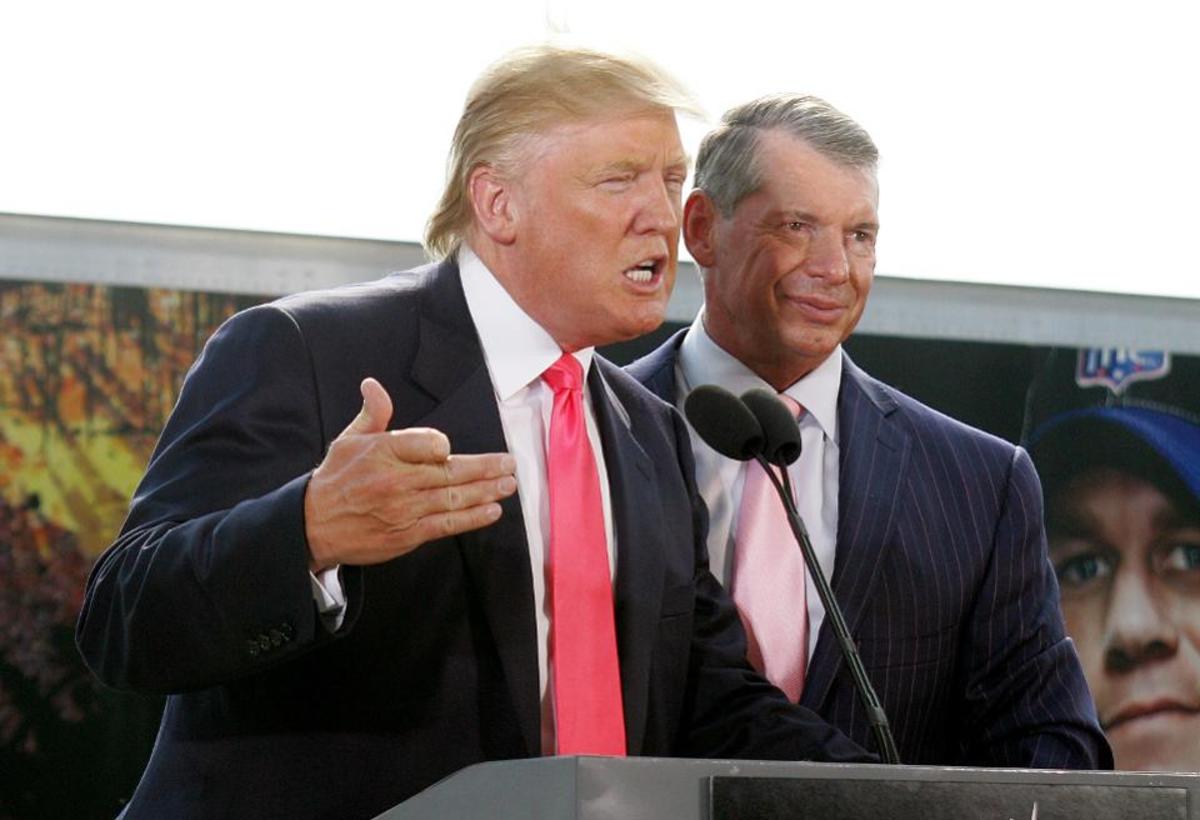 This week it once again showed that it pays to be friends with Triple H. This past Monday on Raw while Kevin Owens was being interviewed backstage by Kevin Patrick, a black car drove directly into a structure in the parking lot in the background. Nikki ASH and Doudrop were then shown surveying the scene. A little while later, Alexa Bliss and Asuka were interviewed in the same spot. During their interview, the car could be seen being loaded onto a tow truck with a bunch of police officers sprinting towards the scene. Finally, during the main event matchup between The Miz and AJ Styles, Dexter Lumis was shown being arrested by police in the crowd. Lumis was released by WWE last April, after having a successful run in NXT. It is unknown at this time why Lumis crashed his car and was arrested. With Lumis, Dakota Kai and Karrion Kross (more on that later) all returning recently, my only concern is that WWE may be relying to much on ex-WWE guys instead of there own homegrown talent. (TJRWrestling)

Triple H is wasting little time bringing back his people. This past Friday on Smackdown, Karrion Kross shockingly attacked Drew McIntyre to end the show. While the attack was happening, Kross’s real-life wife Scarlett came down to the ring and placed an hourglass in front of Roman Reigns. Kross was a former two-time NXT Champion, before being called up to the main roster last August. Kross, who sported a gladiator helmet and suspenders when called up, was quickly released along with Scarlett just a few months later. Hopefully, this run for Kross will be more successful, and he won’t be Roman around the Indy’s anymore. (TJRWrestling)

The AEW World Champion has returned to Dynamite. This past Wednesday’s Dynamite’s main event saw Interim AEW World Champion Jon Moxley defeat Chris Jericho in a bloody battle. After the match was done, the Jericho Appreciation Society attempted to attack Moxley. This brought out the Blackpool Combat Club along with Eddie Kingston and Ortiz to even the odds. While this was all going on, “Cult of Personality” suddenly played in the arena and the AEW World Champion CM Punk made his return to the company following foot surgery after just over two months away. Punk then proceeded to beat up the Jericho Appreciation Society, before staring down Moxley in the ring. Moxley and Punk will now likely face off at All Out on September 4th to crown an Undisputed AEW World Champion. Punk should have the advantage since All Out is in his hometown of Chicago, unless of course, they make the match a First Blood Match in which case he is then screwed. (TJRWrestling)

That concludes another edition of The Top Ten Wrestling Stories of the Week. Thank you for taking the time to read this each week. Although I often joke, I have recently started refereeing with NYCW and respect more than ever what wrestlers do every week. I wrote an article all about it all right here. If you like what I do, despite my jokes being almost as bad as having your resort raided by the FBI. Then follow me on Twitter @Fowlerwrestlin1.