Welcome to the WWE Friday Night Smackdown Reaction, where I offer my take on this week’s show in Greensboro, NC.

We kick off the show with Promo Time with Roman Reigns, as usual. Reigns and Heyman rattle off the same old tired promo about how great Reigns is and how there is nobody that can be at his level. Kayla Braxton was in the ring with them so they turned their focus to the rumors about Brock Lesnar’s indefinite suspension ending really soon. They try intimidating her over it for cheap heel heat. There is mention of tonight’s battle royal main event to determine who will be the next in line to challenge Reigns before leaving. Nothing new or exciting to report here. The repetitiveness is getting to be almost as bad as Charlotte Flair.

Our opening contest is tag team action with Drew McIntyre and Jeff Hardy teaming up to take on Happy Corbin and Madcap Moss. This is your standard paint-by-numbers tag team match formula for the past 30 years with the hometown babyface actually picking up the win. That was surprising, well, until later that is. I think Hardy and McIntyre could make a good team and make a little noise in the tag division.

Up next, Cesaro takes on the Smackdown debuting Ridge Holland. Sheamus was on commentary to sell the Holland character. Instead of showing us what Holland can do, we get a quick match where Cesaro counters Holland into a small package for the win. Sheamus was outraged and so should we. That could have been a really good match. I guess a rematch is in the immediate future.

It was Thanksgiving in the US on Thursday, so it’s time for the time-honored tradition of a WWE food fight. Rick Boogs is up to take on Angel in Thanksgiving Leftovers Throwdown. The match was quick and only served up a helping of 50/50 booking, so Angel picked up the win. No food fight, just Humberto going through a tale of food by Shinsuke Nakamura. It was very disappointing, to say the least.

Kayla Braxton was backstage asking Adam Pearce what he thought about Lesnar’s suspension getting lifted and he sorta freaked out saying it wouldn’t be happing any time soon. Well, that clears that up then.

Meanwhile, Charlotte Flair had been standing in the ring for Promo Time while all of that and a commercial break happened. Flair starts to give the same old tired promo when Toni Storm omes out to save us from it. A food table was still set up from the Throwdown match so Flair hit Storm with two pies to the face. Charlotte Strong. Let’s hope she actually allows Storm to go over her clean since she is the star maker you know.

Sasha Banks was shown earlier in the day complaining to Sonya Deville about what happened at Survivor Series so Deville tossed her into a tag match with Naomi to take on Shayna Baszler and Natalya. Oh look, Deville is on commentary.

The tag match was pretty good with Banks and Naomi working well together. Deville struggled to get her feud with Naomi over on commentary. It was not a pretty sight. Naomi did most of the work in the match with no hot tag spot and picked up the win after Banks wiped out Baszler. Is it too soon for the #FreeShayna again? Also, when will the endless and pointless feud between Naomi and Deville end? It’s just not that interesting anymore.

We get a shot backstage of the list of names in tonight’s main event battle royal and one name was curiously left off of it, Drew McIntyre.

The main event starts with everyone in the battle royal in the ring. McIntyre runs to the ring to clear it out before the match actually starts and he leaves during the ensuing commercial break.

The battle royal was good for a battle royal but nothing really exciting came out of it. The final four Ricochet, Sheamus, Jeff Hardy, and Happy Corbin with commentary forgetting about Sami Zayn falling through the ropes earlier. We get some good action to eliminate Ricochet, Sheamus, and Corbin (in that order) and the bell rang to signal Hardy won in his home state. Zayn slid in and tossed Hardy out to actually win the battle royal. Kayla Braxton was in the ring to interview Zayn when she interrupted him and announced that Lesnar’s suspension had been lifted and he would be returning next week in San Antonio. Pearce looked scared and The Bloodline looked displeased as the show faded to black. 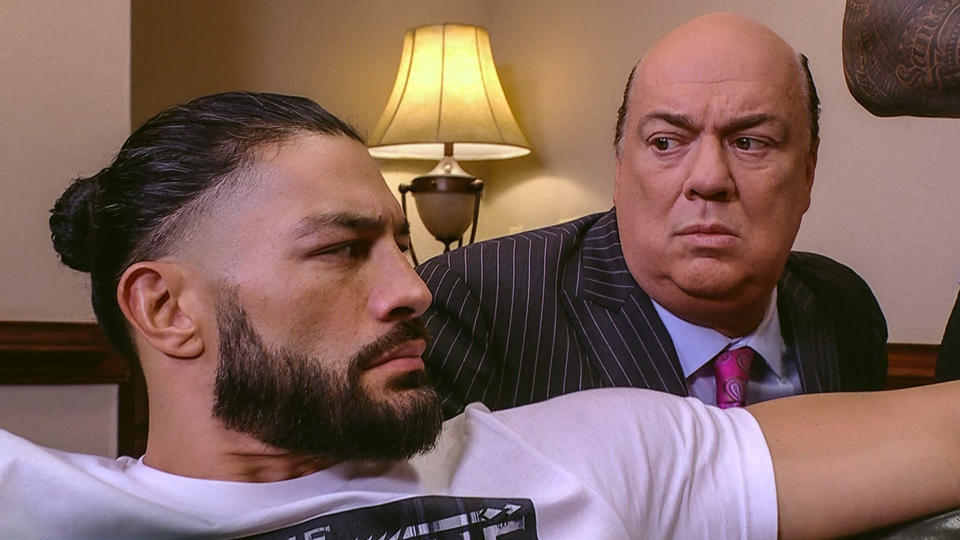 Both tag matches were pretty solid tonight. They both got sufficient time to tell their stories. Both are definitely worth checking out if you missed them.

The battle royal was pretty good. It accomplished what it needed to do. Battle royals are sometimes hard to pull off successfully, but it did well with the multiple stories it had to tell. I’m curious why McIntyre was left off of it, though.

The Holland/Cesaro match was hurt by its short time. Holland showed a little bit of his stuff off, but he could have had a far better debut match with Cesaro than he got tonight.

The pointless Deville/Naomi feud continues with no reason why.

If you have not done so, please check out my column from the other day on why I thought Big E should have won at Survivor Series.