Welcome to the Raw Reaction, where I offer my take on this week’s show in Brooklyn, New York, which is also where Survivor Series took place.

We kick off the show continuing the whodunit from Survivor Series to promote The Rock’s new movie, Red Notice, and the missing egg. Vince McMahon is with Sonya Deville and Adam Pearce in his office. McMahon says if they (Pearce and Deville) don’t find the egg, they will be fired. McMahon issued a reward to the WWE Superstar who returns the egg in time, will get a WWE Championship match with Big E tonight. Well, at least this silliness ends tonight.

Our opening match has Riddle, doing a Randy Orton cosplay, taking on Dolph Ziggler. The match was your standard Dolph Ziggler match with Riddle hitting a couple of Orton’s moves before finishing Ziggler off with an RKO. Robert Roode hopped into the ring after the match and Orton disposed of him with a Bro Derek. RK-Bro celebrated, but the split is coming.

We see the Raw and Smackdown rosters tearing the backstage area apart looking for the egg. R-Truth found a football that he called the egg and tossed it in the women’s shower room? A woman screamed and Truth said, “it ain’t in there.” That, sadly, will be the best part of the egg hunt.

Promo Time with Becky Lynch is next. The heel Lynch got a decent pop from the crowd. Lynch said that her journey started three years ago in that very arena with Charlotte and it ended last night in the same arena with Charlotte. She’s ready for something fresh and new. Lynch briefly turned face to rip on the crowd for disrespecting the 5 on 5 Women’s Survivor Series match last night. Well, Becks, that match was pretty poorly booked to begin with and went on longer than it should have, but I digress. Lynch flips back to heel mode to focus on Liv Morgan. Lynch puts Morgan down before leaving. No sign of Morgan…yet.

Bianca Belair is up next for the rematch absolutely nobody wanted with Tamina. The match was decent like last week and Belair winning was never in doubt. After the match, Natalya attacked Belair before Doudrop showed up to attack Belair again to continue that rivalry.

Promo Time with Seth Rollins is up next. Rollins runs down all of his Team Raw teammates for getting eliminated before Finn Balor came out for their scheduled match that didn’t happen. Balor and Rollins brawled around the ring and ringside area before Rollins put Balor down with two stomps. That should set their feud up. As Rollins was heading to the back, a fan jumped the barricade and attacked Rollins. The show cut away to replays so security could get the fan escorted out. There is a fan video of the incident making its rounds on Twitter, which we have covered on the website here. The second ref that came down to help hit a rather impressive flying tackle.

Meanwhile, the egg hunt continues backstage and Smai Zayn asked McMahon if he was serious about the title shot. McMahon said yes and Zayn said he knew who had it and would bring them to McMahon.

Tag team action is next with The Street Profits taking on AJ Styles and Omos. The match was nothing really special to write home about. Omos is still really limited in the ring. The Street Profits outsmarted (?) Omos this week by dousing him and AJ Styles with fire extinguisher spray for the DQ ending. A rematch next week is likely.

Hey look, the Women’s Tag Team titles are going to be defended. The champions Nikki A.S.H. and Rhea Ripley defend against Carmella and Queen Zelina. Carmella almost ended this quickly, but Ripley broke up the countout. The match itself was okay. Ripley and Nikki ditch the career boat anchors with Carmella and Vega capturing the tag titles. I’m guessing this is payback for the Super Smackdown snub?

The missing egg story comes to an end (Thank God) and the culprit was revealed as Austin Theory. Theory said he took it to get a selfie with it. Instead of firing him, McMahon rewards Theory with the WWE Championship match as this whole angle lays an egg. 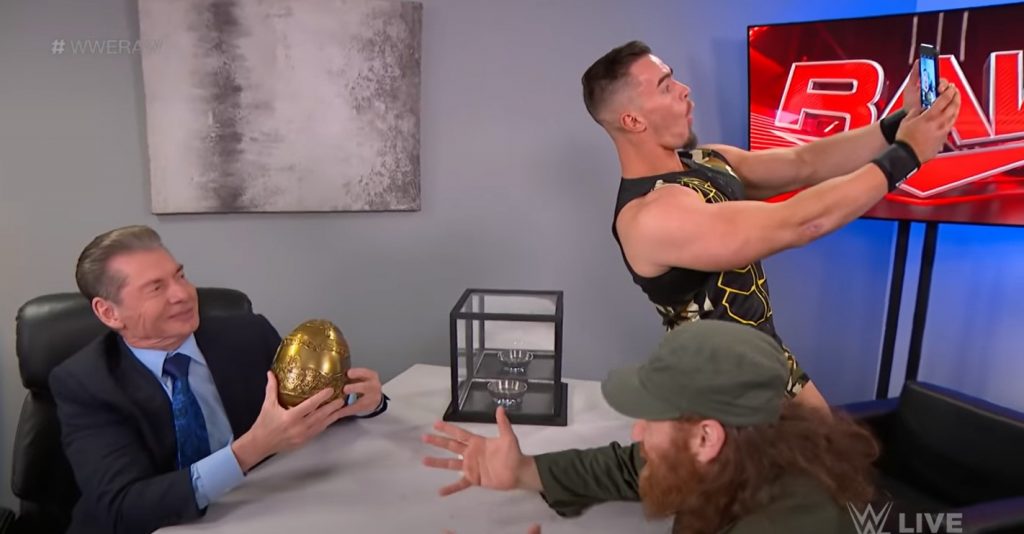 Speaking of surprise title defenses, here comes Reggie to defend the 24/7 title in an actual match against Cedric Alexander. Cedric finishes Reggie off quickly with the Lumbar Check, which just looks great as a finisher. As the Job Squad runs down the aisle, Alexander turns around to walk into a top rope Blockbuster from Dana Brooke? Brooke captures the title before the Job Squad can break up the cover. Everyone looks befuddled in the ring since there are no intergender matches allowed in WWE. The last time we had a female 24/7 Champion, it was when Maria was pregnant and she lost it to Mike Kanellis when he pinned her on the examination table at a baby checkup. Let’s see how we get out of this one.

The Mysterios take on Bobby Lashley in a handicap match where the Mysterios are the ones at the handicap. The Mysterios looked good at certain points, but Lashley just dominated them.

Backstage Promo Time with Liv Morgan is next. Morgan talked about the win for Team Raw when Becky Lynch showed up to make fun of Morgan. Morgan dropped Lynch to end the segment.

The United States Champion Damian Priest is out next to issue an open challenge for the US Title. Apollo Crews comes out with Commander Azeez to talk about why Priest shouldn’t be champion before turning down the challenge for tonight. Sami Zayn runs out to accept since he was screwed out of the WWE Title match. The match was okay with Zayn doing his best to make Priest look good. Priest hulked up and wiped out Zayn to retain the US title. Priest didn’t look like a heel here, unlike at Survivor Series.

Main event time with Big E defending the WWE Championship against Austin Theory. Seth Rollins and Kevin Owens show up at ringside to take away from the match at hand. The match was okay with Theory showing off some of his stuff, but this was just about righting the wrong from Survivor Series. Big E wins easily and takes out both Rollins and Owens after the match.

Becky Lynch continues to impress with her promos. She’s getting Liv over more and more just on the promo factor alone. She’s going to make Morgan into a huge star. Perhaps we’ll get their title match at Day 1 and maybe the title will change there. We’ll just have to wait and see how this develops. The build has been great so far.

The whole missing egg story from Survivor Series just laid an egg. It was not all that interesting except for R-Truth’s spot.

All four title matches were rather ho-hum matches. It was nice to see so many titles defended on Raw, but three of the four had absolutely no meaning behind them.