Welcome to another edition of An Indy Reaction, where I take a look at the recent Insane Wrestling Revolution 8 – Insane Holiday Hell show.

I have previously written about IWR shows on TJRWrestling including this column back in October. IWR is based in the Michigan area. The promotion is run by former WWE/ECW superstar Rhino out of Monroe, MI. They regularly feature Impact Wrestling superstars along with former WWE and ECW superstars.

This is the event poster: 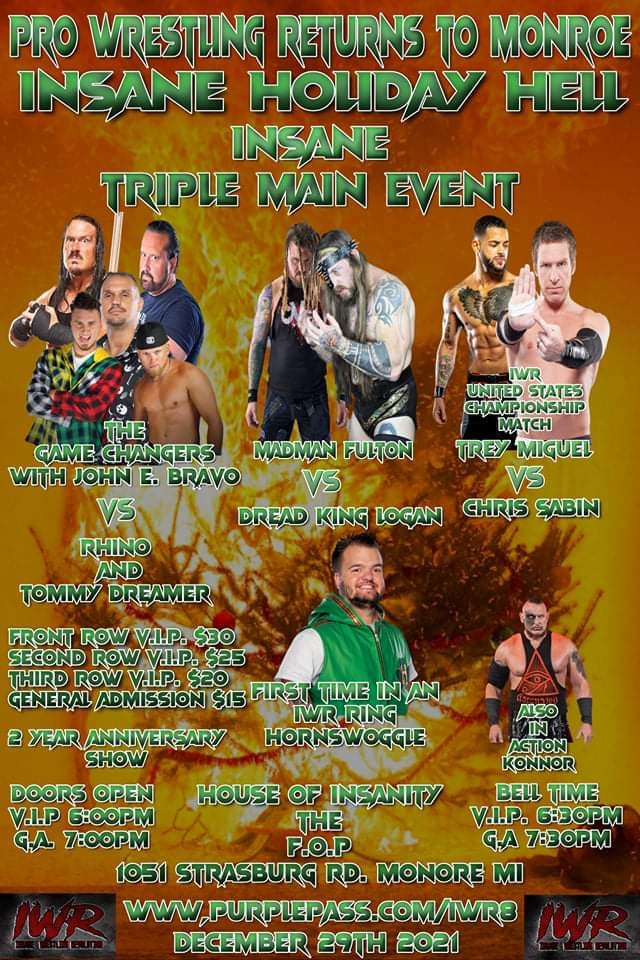 Prior to the event, there were several newsworthy events. First, the new IWR championship titles (IWR Champion, United States, and World Tag Team) would be on display at the event. 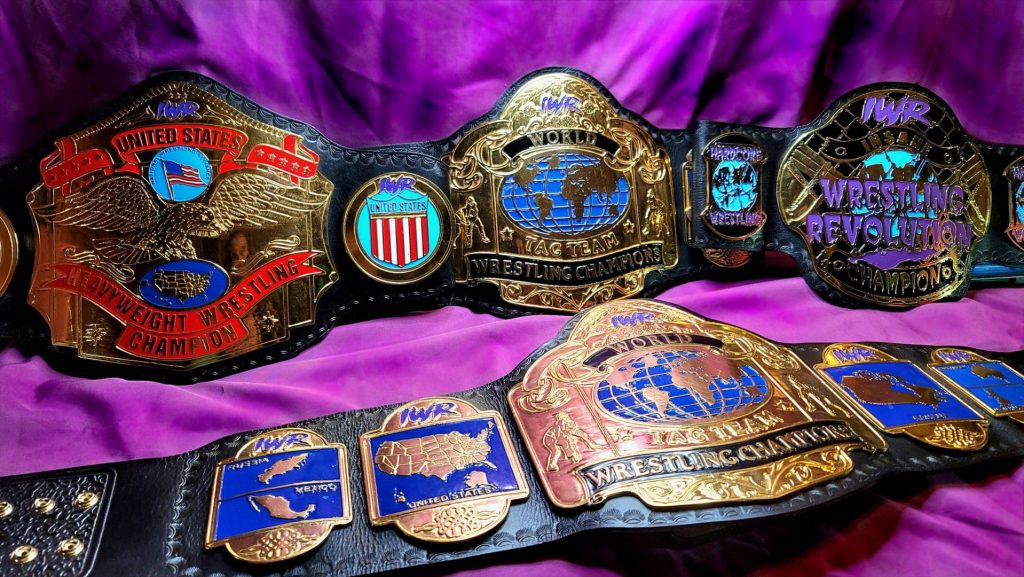 And second, due to WWE (?) scheduling, Petey Williams will be unable to attend to face Trey Miguel in one of the main event matches. In his place, Chris Sabin will face Miguel instead and that match will be for the United States Championship.

This would serve as the promotion’s second-anniversary show. The event was live-streamed with commentary from IWR’s Joe Broni. VIP tickets sold fast and I was unable to get one. The show was literally standing room only, which was a good sight to see. When we got there, I asked ring announcer Mark Roberts where the Christmas suit was and he said not this show. I also wished Tommy Dreamer luck in his match tonight. With the show live-streamed, Nate Thompson Video posted the VIP matches on YouTube and I watched them to add to the review. It appeared that Nate was going to post the three main event matches up to YouTube. but had not done so at column publication.

The first of three VIP matches had Sam Beale take on The Kenny Urban. This was a fun little opener with decent back and forth action in it. The commentary was a really nice touch. The video presentation was really good, given it only being a one-camera setup. Beale would pick up the win in a quick match.

Up next, “The Rodrageous One” Rod Lee squashed Ace Evans. Lee has some good energy about him and is pretty entertaining.

Our final VIP match has “The Amazing” N8 Mattson taking on Malcolm Monroe III (MM3). This match was really good. Both men are familiar in the Detroit indy scene. This was another action-filled back and forth bout. I would recommend it is worth a watch. MM3 would pick up the win to bring the VIP matches to a close.

The main card kicks off with six-man tag action with “The Bachelor” Benjamin Boone teaming with DTA (Death Threat Army) w/John E. Bravo to take on the team of DBA, The Mysterious Movado, and former WWE superstar Hornswoggle. This was a fun little opener with Hornswoggle still up to his usual tricks. Movado and DBA work well as a team and I could see them as future tag team champions. Hornswoggle chokeslams Boone to pick up the win.

Our next match has Tanner taking on Chris Clontz. They tried really hard but it just wasn’t working. I don’t know what was off in their dynamic but it just didn’t click for me. Hornswoggle is legit six feet to my right feverishly going about his phone executing his Anonymous Raw General Manager authority (which he did agree when I asked him at intermission) and added Konnor to this match. The YouTube video picks up with Konnor’s entrance and the match picks up. Konnor demolishes both guys in the ring before breaking out the toys. Konnor gets a crutch and takes out Clontz. Konnor goes and gets more toys out; a table, chairs, door, Legos, and…Clucky? Clucky’s Acid Drop is blocked and the kid BOUNCES off the ring apron before Konnor comes out and chokeslams him through the table, breaking it. Legos go on the door so Tanner can be driven through it and pinned.

It’s triple main event time. Up first, Chris Sabin takes on Trey Miguel to crown the very first United States Champion. This actually surprised me a little when I saw the announcement, I figured Miguel and Logan would square off for the IWR Championship instead. I remember Sabin from his Motor City Machinegun days in Impact and he has not lost a beat. It was an amazing match to witness. If you only watch one of the YouTube linked matches, this is the one to watch. Their styles matched up well and I’d like to see a rematch between these two in the future. Miguel picks up the win to keep his undefeated streak intact and capture the United States Championship. After the match, Roberts conducted an interview with Miguel and he tells a very emotional story about the day being his late brother’s birthday and the crowd gives him a standing ovation afterward. How is he not the face of this company?

Here is a fan video of the match, including the after match promo:

That takes us into intermission. I talked briefly with Hornswoggle, Konnor, and Miguel. After intermission, Roberts conducts another in-ring interview with a new superstar, “The Genetic Jackpot” Joe Coleman. Joe gives off Scott Steiner/Buff Bagwell vibes. Joe beats up a fan with a Dread King Logan sign to bring Logan and The Franchise Shane Douglas out. Logan beats the fan up as well and tells Joe only he can beat up his fans.

Madman Fulton comes out as Logan’s opponent in our second main event. The match was good for heel vs. heel. Logan tried to play the babyface role and he’s better suited as the monster heel steamrolling over everybody. They did a good job getting Logan’s toughness over. In the end, Fulton locked Logan into a submission hold and Logan passed out. That was a rather surprising win for sure.

(No YouTube video posted at the time of posting.)

Our final main event has Rhino and Tommy Dreamer teaming up to take on The Gamechangers, “Chinstrap Jesus” Kyle Barrett and Nate Bock with John E. Bravo in their corner. Pre-match stipulations were if the Gamechangers won, the three of them would fight Dreamer 3-on-1 for five minutes or until the first pinfall is scored. If the Gamechangers lost, Dreamer got Bravo one on one for five minutes or until the first pinfall is scored. Bravo was dressed as obnoxious as the Gamechangers were. With the house packed, they did not fight through the crowd. Dreamer hit a beautiful RKO from outta nowhere just because. It was a fun tag match, but given the match stipulation, the outcome was a given. Dreamer pinned Chinstrap Jesus with the dreaded ROLLUP OF DEATH~! to earn his five minutes with Bravo.

Dreamer readied to take on Bravo, who did the typical heel stalling until it is announced that if he didn’t fight Dreamer, per the match contract, Bravo would be suspended for one year. Bravo finally locked up with Dreamer, but a distraction from the Gamechangers allowed the old Fuji dust to the eyes trick and Bravo picked up the win. After the match, Bravo and The Gamechangers attacked Dreamer and Rhino 3 on 2 until Hornswoggle came out to clear the ring. After order was restored, Dreamer put over the crowd and the young girl that helped him chop Chinstrap during the match, posing for a picture with her to close out the show.

(No YouTube video posted at the time of posting.)

We are reminded of the next show, IWR 9 – St. Valentine’s Day Mayhem “Night of Champions” on February 17th. That show will feature the crowning of the IWR Champion and Tag Team Champions (match announced as DTA v. Rhino and Heath Slater) and Trey Miguel defending the United States Championship against Impact’s Rohit Raju.

Let’s take a look at the highs and lows.

Amazing match between Sabin and Miguel for the United States Championship. It was definitely the match of the night. Props to the IWR faithful (they need a name) for recognizing Miguel after the in-ring promo with a standing ovation. It was definitely a sight to see.

The Tanner/ Clontz match just wasn’t clicking, unless that was the point to bring Konner in.

Dread King Logan just doesn’t work as a babyface right now. He needs to be the monster heel he has been lately.