I took a week off from writing last week due to the holiday, and I wanted to come back with something that has been on my mind over the last couple of weeks regarding some WWE and AEW wrestlers. As we bring in a new year, everyone has New Year’s Resolutions that want to stick to throughout the year.

Sometimes it’s getting back in shape, or cutting something out of your life, but it’s always something that you want to do to improve on your life. For me, it’s something that I try to apply to multiple things in my life, including who I think should be a break-out star in 2022 in wrestling. We always get excited after Christmas because we know the Royal Rumble and WrestleMania are right around the corner and usually, a new star is born. At least someone we can tell the company is getting behind. In AEW, we can get excited for another PPV in the first quarter and see the conclusion of some good storyline going on. I wanted to sit down and share with you five guys who have had strong 2021’s and I expect them to do bigger things in 2022.

Now, I am taking everyone into consideration between the two major companies and while I have never done a countdown column, I thought it would be fun to give it whirl. I have limited myself to two from AEW, two from WWE, and one free agent. These are stars that I think if booked properly, can really break out from the pack. Also, this isn’t in any particular order, but just five people I would love to see break out. Let’s refer to this at the beginning of 2023 to see how we did! 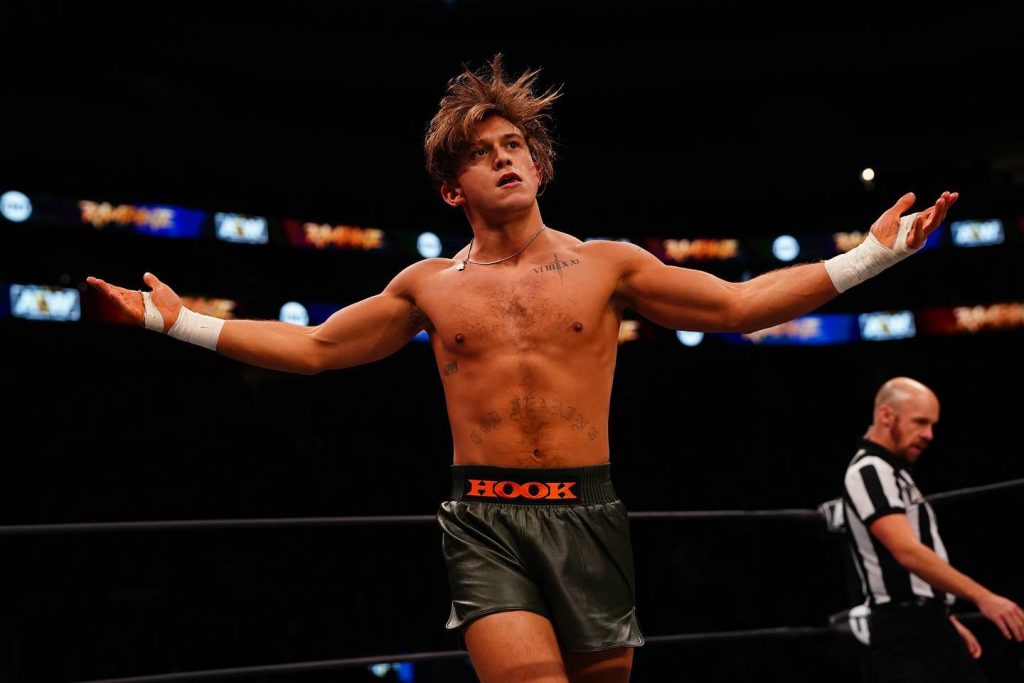 I am on the Hook hype train. This kid has been hyped up a lot throughout his relatively short wrestling career and has faired well in the ring thus far. Having a father who is the Human Suplex Machine doesn’t hurt, but he still seems like the moment isn’t too big for him. He has good size to him and he has believable offense. He sticks out in a company, and in an era of wrestling, where stuff seems more choreographed than ever. He comes off as authentic, and he can toss around bigger guys as he has shown on multiple occasions. A friend of mine asked me if I thought Hook could be an AEW Champion in under 18 months, and I had a hard time coming up with a reason why he couldn’t. If booked right, I think this kid has a lot of potential, and being in his early 20’s with a lot of time to learn and grow, he will be a player in the industry for years. I don’t know what it is, but the way he throws punches almost reminds me of Kurt Angle. I am not comparing the two, but he throws punches that are very believable and looks like he is actually striking someone. With some more time on TV, he is going to be someone who makes an impact.

In 2022, I want to see Hook pick up a few more wins on Rampage before moving him over to Dynamite. It almost seems like watching Hook wrestle is an attraction on Rampage, so keeping him there while giving him quality victories will help everyone in the long run.

I don’t want to pick people just from Team Taz, but this kid has shown that he has the potential to be a big-time name. He had a high-profile match with CM Punk, and other than a botched Frankensteiner, he looked like he held himself well. Taz has done a really good job picking guys to be in his group that shows a lot of potential because Ricky Starks could even go on this list. Hobbs has the body that you are accustomed to seeing with a pro wrestler, and his mic skills will get better when he has more time on TV. He has been in big spots on National TV which can be a great learning experience, although some could argue some of the things can be touched up in a developmental program. I don’t think Hobbs will win the AEW Title or anything, but with the right minds behind him, he has a chance to become a star. Hobbs hasn’t had a ton of time in the indies, so his time in AEW has been important in his development. Having Taz teaching the ropes has surely helped and I am sure he is striving to get better every day. Put him in the ring with a workhorse like a Danielson, or a rematch with Punk, and see how far he has come along.

In 2022, I would love to see Hobb win AEW gold. I could see him having a Tag Team Title run, or even a TNT Title stint if it’s in the cards, and putting him against quality opponents in that spot would help his overall growth. 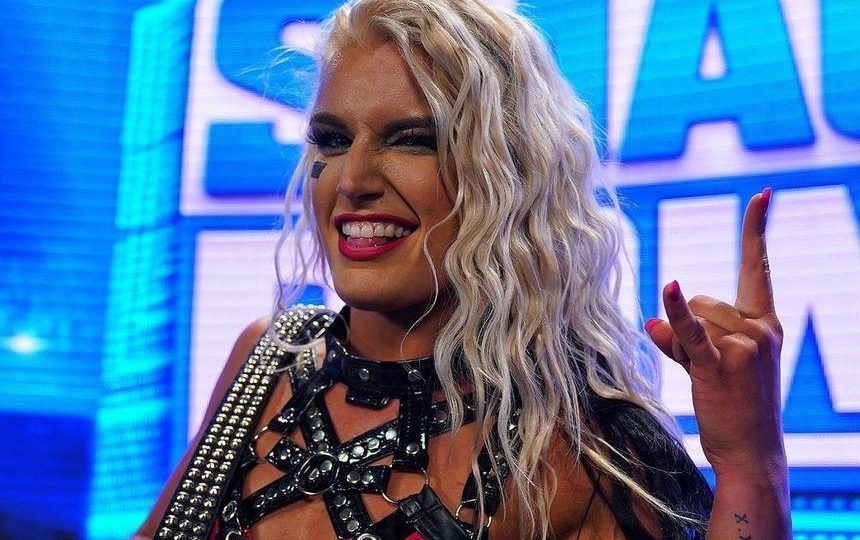 Storm went from working a title match in WWE to asking for her release within a week. With the way people have been leaving the company, either by themselves or by being cut, this shouldn’t be a shock to anyone. It’s nice that someone told them they were leaving before they had the chance to blindside a talent with a release, and I have to give her kudos for that. I liked her work in NXT and although she was limited on the main roster, she was put in main event matches with some big-time talent. I don’t know if WWE wanted her to leave or not, but at this point, it doesn’t seem like that matters much. Her obvious choice would be to go to AEW, and while I feel like their roster is a little full, I think adding a talent like Storm could give you a strong hand in the women’s division and give established AEW Women’s stars like Britt Baker, Thunder Rosa, and Serena Deeb a new face to have solid matches with. Look out for Toni Storm for the next couple of years.

In 2022, Storm has the most up in the air future of the five. I think she is super talented and I expect her to land in AEW, but time will tell. If she does land there, she should be put in with the upper card talent on the roster and should be fighting for both the TBS and AEW Women’s Title by year’s end, but definitely should be vying for the titles much sooner.

Austin Theory didn’t have much time in NXT, but now he is playing a big role in WWE. He is having a lot of screen time with Vince McMahon and has been in a featured spot on Raw. He has the look and his mic skills seem to be right where they need to be. If you put him in the ring with guys like Kevin Owens, Seth Rollins, and a few other stand-out performers, he can learn and grow. One thing working for Theory, much like Hook, is that he is a young guy. Learning on the fly on Raw rather than NXT can be quite the learning curve, but it doesn’t seem like Theory is crumbling under the pressure. With a little more ring seasoning and learning, this kid will be main eventing shows in no time. We always harp on someone dethroning a champion and becoming a made man. Guys like Theory have the chance to be one of those stars. Give him some time to develop before pushing him too hard. I don’t want to see Theory challenging Roman Reigns or whoever is champion in the spring, but maybe by year’s end, he will be one of the main event players.

In 2022, I think Theory will be in some big spot and will even have some main event matches. I would like to see him get away from this McMahon angle, but it seems like the old man has taken a liking to him, and that can’t be a bad thing. Put him in the ring with some old pros and see what he can do. From what we have seen so far, I don’t think the challenge would be too much for him.

You can’t have a list like this and leave off a guy that seems like he has all the tools to be a megastar. Not just another superstar, but a multiple-time world champion. There have been prospects in the past that we have thought would do big things and have flamed out, but Bron doesn’t seem like someone that will follow that mold. He has been in NXT title matches already in his short run, and I expect him to win the title the next time he has a shot at it. Like Hook, he has the pedigree of pro wrestling royalty with being a descendent of the mighty Steiner Brothers. He is good on the mic and has been very good in the ring, considering how little he has been in front of people. He is a former athlete and has seemed to adapt well to the pro-wrestling style. The only change I think they should make is his name, but I have been on record for saying that for a while now. Bron needs to have a strong run at the top of NXT before moving up to the main roster, but even if he goes up a little sooner, I think he will be just fine. It will be awesome to see another Steiner in the bloodline getting some TV and his offense reminds me a lot of his families, which rules.

In 2022, Bron will be an NXT Champion and will be pulled up to the main roster before summertime rolls around. I don’t know if he will be WWE Champion in 2022, but if he isn’t, he will be in 2023, barring anything unforeseen. He is the safest bet of the group. 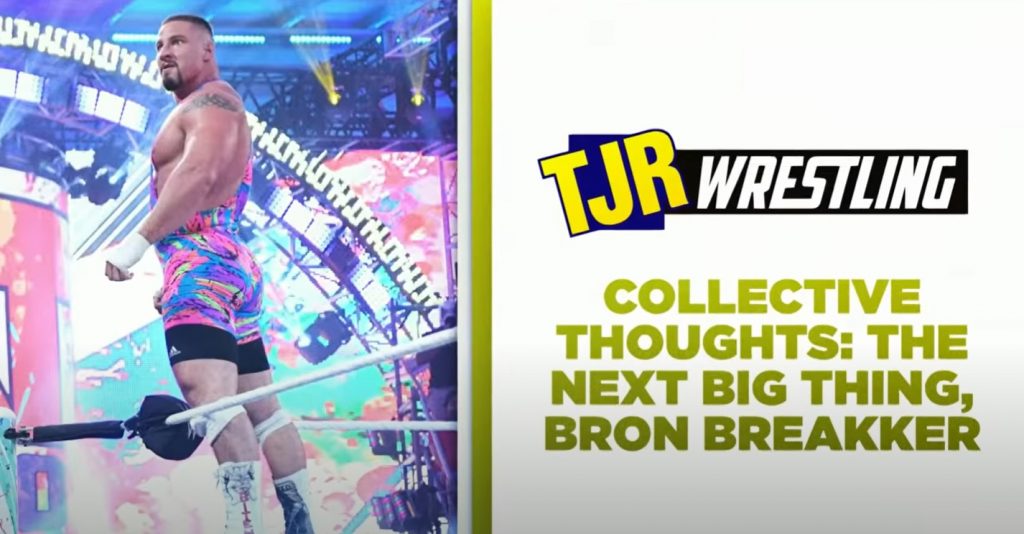 You may recall that in September I wrote a column about Bron Breakker’s potential and a graphic featuring this website was shown on NXT soon after as you can see above. I’m excited about his future.

These may seem like obvious picks, but when the writing is on the wall what can you do. It’s like a Pay-Per-View event that is predictable and while most of the outcomes are foregone, you can still appreciate the show. All five of these talents have stand-out things about them, but it all comes down to the booking and what the “powers that be” see in them. I do expect big years from all of them though, as well as a strong year for wrestling which is good for everyone.

Those were my Collective Thoughts. I hope you and yours had a great holiday season and have great aspirations going into the new year.

What did you think of the list? Do you have different people in mind? Let me know over @collectiveheel on Twitter. It’s a new year, but I will still be covering WCW for the site and next week brings us to June 1999 with the WCW Great American Bash. I hope to hear from you all soon. Take care of yourselves, and most importantly, each other. I will be back soon enough with some more Collective Thoughts.