Welcome back to Canton’s Corner where I like to dive into some wrestling-related topics that cover recent news or TV items, this time with a focus on some WWE name changes.

There have been some recent name changes in WWE that have led to fans being angry, which makes me sit here today to tell you to take a deep breath and relax. It’s a part of WWE. It has always has been a part of WWE and it always will be. Does it really matter that much? I say no. Who cares really? Whatever the name gets changed to is something we will get used to. WWE wants to own the name for trademark purposes. That’s their right as a company. If a wrestler doesn’t like it then avoid signing a contract. Let’s dive into some of the recent NXT call-ups that have new names with four of them coming on Smackdown. * Butch is Pete Dunne’s new name. I don’t really get that one, but it’s a way to give a character a one-word name. There really wasn’t another Pete around and Pete Dunne is a short name together. I thought he should keep that. With that said, I’m already used to Butch. Now, we could ask why did they change Pete Dunne’s name, but not Ridge Holland’s name? I honestly have no idea. It’s up to the boss Vince McMahon and whoever else decides these things.

* Gunther became Walter’s new name when he moved to NXT 2.0 earlier this year and now he’s on Smackdown with the name. We knew him as Walter for three years in WWE, plus he used that before WWE, so why the change? It’s just a fresh start for a guy who is so talented. I hope the big Austrian thrives on Smackdown. Push that man!

“Not all to be honest. If it would be the other way around, and it would be Gunther before and Walter now, it would have been the same uproar. A lot of people react negatively to change. Change is normal in life, and it’s part of it, and we have to go with it.”

Frankly, I’m just happy that Vince McMahon didn’t change Walter’s name to Wally because Vince probably watched “Leave it to Beaver” when he was younger. Google it, kids.

* Ludwig Kaiser is the name of the man formerly known as Marcel Barthel. Ludwig used the Barthel name for four years. We got used to it. It was a German-sounding name for a German man and now he’s got the name Ludwig, which is also a German name. I don’t have an issue with it. If it was “Ludvig” then maybe people would have nightmares of that awful Ludvig Borga guy from the 1990s, but I think he’ll be just fine as Ludwig.

* Raquel Gonzalez was an obvious main roster call up since she had done everything she could do in NXT, so I wasn’t shocked to see her on Smackdown. Raquel is one of the tallest women in WWE and as she towered over interviewer Kayla Braxton (WWE always wants shorter interview people to make the talent look taller), we found out her name was now Raquel Rodriguez? I don’t really understand the need to change that name either, but it’s not like it will bother me much at all. Raquel should do well.

Let’s talk about the past a little bit. When I was a kid, there was this really fat guy in WWE that was this badass character named the One Man Gang. I thought that was a great name because he was so tough he was a gang all by himself! Great. Then, he went through this character change and suddenly this man that used to be in all black was dressed in bright yellow and blue while he was called Akeem the African Dream. They even did this elaborate explanation about Akeem’s rebirth that is shown in the video below. Not only that, but he had some sweet dance moves!

Trust me, if there was Twitter in the 1980s, I’m sure wrestling fans would have been bitching about the badass One Man Gang suddenly becoming a dancing “African Dream” named Akeem. Shoutout to NBA legend Hakeem “The Dream” Olajuwon, who was known as Akeem Olajuwon until he added the H later in his career in the 1990s.

There is also a WWE Hall of Famer that had four names during his career. Charles Wright started out as the mysterious Papa Shango. When that run ended, suddenly the guy looked totally different as he became Kama, who was sometimes known as “The Supreme Fighting Machine.” Years later, Kama was gone and suddenly a guy named The Godfather was a big part of The Attitude Era as the guy that brought out “ho’s” to ringside. The Godfather’s fourth name in WWE was The Goodfather when he joined the evil Right to Censor group. Four names by the same guy. The Godfather won over the crowds easily and was by far his best character, which is why that’s what people call him now while ignoring the other characters he played.

There are so many other successful characters that had different names. Let’s hit on some Attitude Era guys that turned their careers around thanks to some changes to their names and character.

* The Roadie was more of a lackey to Jeff Jarrett, but when he turned into the Road Dogg and teamed with Billy Gunn, suddenly the New Age Outlaws became the hottest tag team in wrestling. Oh, you didn’t know?

* Sparky Plugg was a terrible name for Bob Holly to use, but he evolved in his career and Hardcore Holly worked out for him. Suddenly he was respected as a tough guy while people forget that he debuted as a race car driver.

* Bradshaw was a successful tag team wrestler with Faarooq in the APA for a long time. Before that, he didn’t have a good run as Justin Hawk Bradshaw. In 2004, he totally changed his gimmick to become a millionaire heel named John Bradshaw Layfield, who ended up as a main eventer on Smackdown. That re-invention worked perfectly for him.

One of my favorite character changes happened to a guy named Barry Darsow, who was the long-haired badass named Smash from the Demolition tag team. They might have had the coolest gear of any wrestlers during their entrance with black leather and silver. It looked badass! After his run with Demolition ended, the man was running around with this crappy grey outfit that had tire marks on it because he was known as The Repo Man. What the hell is Demolition Smash doing as a guy that steals things? I have no idea, but it taught us at a young age that pro wrestling can be the goofiest thing in the world and you either love it, or you move on from it. By the way, Barry’s “Mr. Hole In One” gimmick in WCW was hilariously bad too. It didn’t get anywhere, but he sure tried. 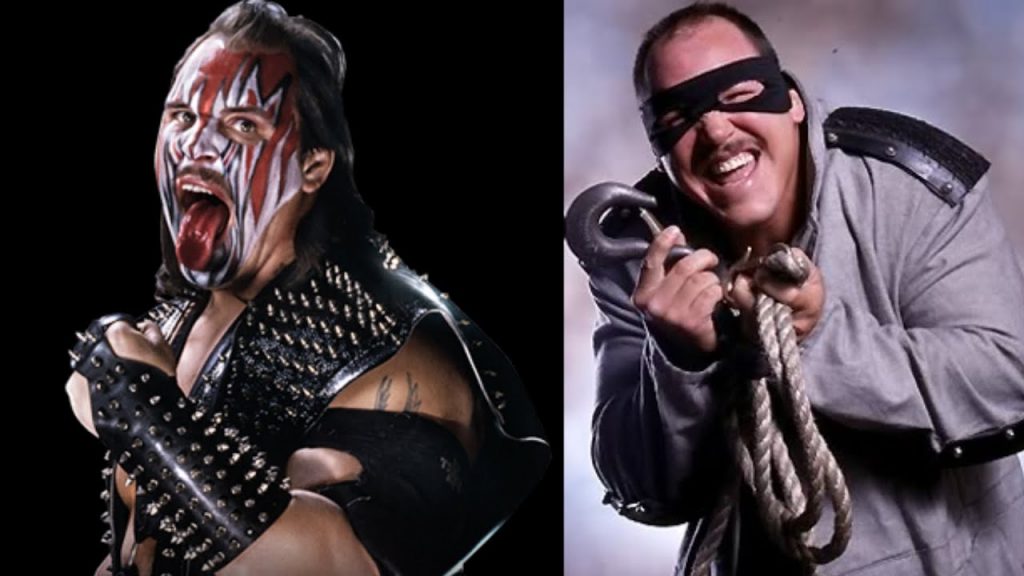 The name Dolph Ziggler always comes to mind on the subject of names because some people think it’s terrible while others like it since it probably came from the Boogie Nights character Dirk Diggler. (Great film, by the way, but parental discretion is advised.) When Dolph first debuted, his gimmick was literally shaking the hands of people and saying his name repeatedly. It was as if WWE knew the name was bad, but felt like they could get it over anyway. And guess what? It’s about 15 years later, Ziggler is a no doubt WWE Hall of Famer that has had an incredible run in WWE.

The Miz is a dumb name. It’s basically just the first three letters of Mike Mizanin’s real name. It’s certainly not cool like “The Rock,” which was the evolution of a guy that started at Rocky Maivia, was booed profusely and then shortened it to The Rock because it just worked for him. In the case of The Miz, he started doing it on Real World, then he get to WWE and somehow the company decided to run with it.

Is CM Punk a good wrestling name? It was when he was a guy in his 20s making a name for himself with long hair and tattoos, but now he’s a millionaire in his mid-40s. I’m not saying he should change his name. I’m just saying sometimes names lose their purpose. It’s not like Shawn Michaels was much of a “Heartbreak Kid” when he was a balding dude in the final years of his career, either. 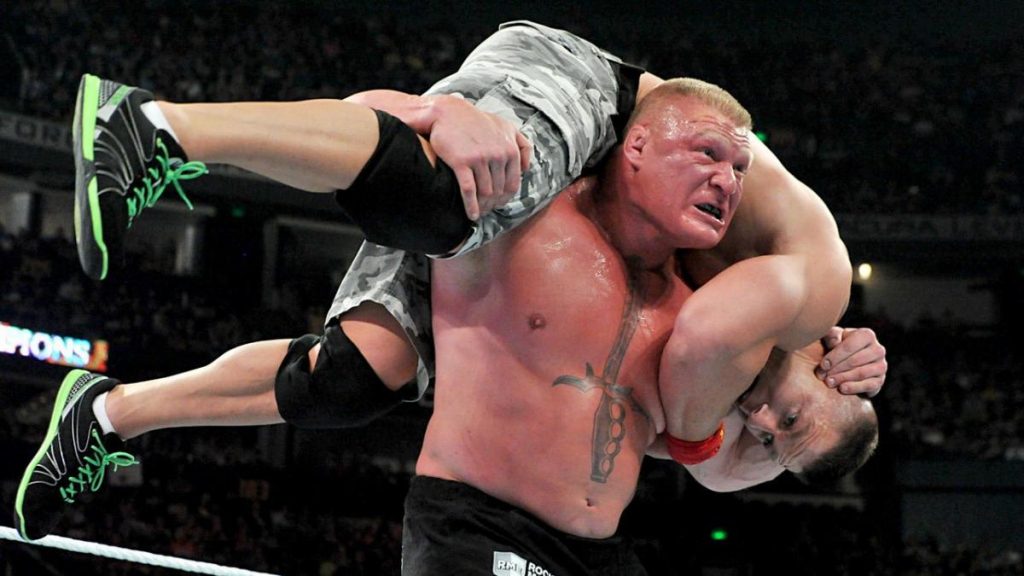 WWE has always been weird about names in wrestling. There was a period in the early to mid-2000s where a lot of people got to keep their real names on screen like Kurt Angle (obviously you shouldn’t change the name of an Olympic gold medalist), Brock Lesnar, John Cena, Randy Orton, Mickie James, Bobby Lashley, Shelton Benjamin, Charlie Haas, and so on. I don’t know why they got to keep their real names or if WWE regrets it, but I think John Cena is a lot more successful because he got to use his real name instead of being The Prototype. If Brock Lesnar’s name was “The Beast Incarnate” would that be better than Brock Lesnar? I don’t think so. Once again, I don’t know why WWE was lazy in terms of names during that time period, but I’m sure the wrestlers that got to keep real names are happy about it.

There are rumors of more NXT guys/girls heading to Raw or Smackdown soon. Names like LA Knight and Tommaso Ciampa could be showing up somewhere new in the near future, perhaps even tonight. If they do, I hope they keep the names they have used in NXT. If not, guess what? We’ll get used to whatever the new names are.

Regarding another big name NXT wrestler, I promise you if Bron Breakker’s name gets changed to Bron Steiner (his real name is Bronson Rechsteiner) when he’s moved to Raw or Smackdown then I’m pretty sure most people aren’t going to complain about that one.

I’ve been writing about wrestling for over 20 years now and 13 years on a full-time basis. I have learned in that time that fans hate change whenever it comes to a new name or a new theme song. There might be more Twitter outrage during a theme song change compared to a wrestling name, but there’s no way to really measure that outrage. Anyway, like Gunther said above: “A lot of people react negatively to change. Change is normal in life, and it’s part of it, and we have to go with it.” Well said, Wally! I mean Gunther.

Embrace change in wrestling. These men and women are professionals whose job it is to entertain us. Some of them might be lucky enough to use the same name for 20+ years beyond. Others go through change all the time. That’s part of the business. It always has been and it always will be.

Thanks for reading. Please check out my reviews of every WWE PPV ever listed in order. Go Toronto Raptors, Toronto Blue Jays and Toronto Maple Leafs. My contact info is below.