With the 2022 NJPW G1 Climax around the corner, this is as good a time as any to look back at some tournament classics. This annual tournament has featured many outstanding classics over the years and has helped elevate the careers of several wrestlers.

Tomohiro Ishii became the G1 MVP and has enjoyed that reputation for years thanks to his penchant for simply outstanding matches (read: fights). Kenny Omega had his first taste of main event glory when he had two career best matches in his debut year. Kota Ibushi, Shinsuke Nakamura, Hirooki Goto, Katsuyori Shibata, Tetsuya Naito, and many others have had their best matches during this tournament.

And then there’s Tanahashi and Okada. These two wrestlers have put on one amazing match after another, many of which still hold up as among the greatest matches of all time. That’s why the sight of Tanahashi and Okada facing off in singles competition has sent to many fans around the world into a frenzy. Tanahashi and Okada have set new standards for great matches and they’ve managed to get so much out of their (relatively) few encounters. And once again, these two were announced as opponents in the G1. But could they live up to their own hype and still deliver after not facing each other one-on-one for over two full years? Read on to find out.

It’s time to look at the last and final Tanahashi/Okada match (at least for now) from New Japan’s 2021 G1 Climax Tournament.

This is the fourteenth singles match between Tanahashi and Okada since their main-event feud began in February 2012. They haven’t faced each other one-on-one in over two years, with Okada winning that last match and finally breaking the trend of only drawing with Tanahashi in G1 matches. Since that match, little has changed for either wrestler. Okada is still New Japan’s ace and Tanahashi is still the former ace that’s still in amazing shape. But both of them are two years older and more broken down.

Plus, there is one change that Tanahashi likely isn’t aware of. Since their last match, Okada has added a new move to his arsenal: the Money Clip cobra clutch. That submission hold has helped him quite a lot especially since all his big setup moves target the head and neck. So now, not only does Okada have a big high-impact lariat finisher, but he can also make his opponent tap out much more easily than before. But will that strategy work on Tanahashi, a man famous for his tenacity and superhuman conditioning in the ring? 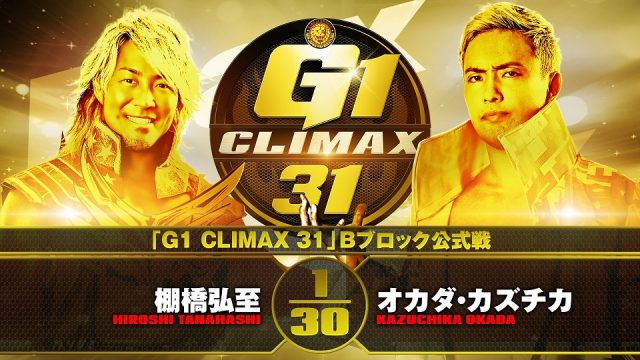 This match originally took place on September 19th, 2021. It was rated ****3/4 out of five by the Wrestling Observer’s Dave Meltzer.

They lock-up and begin with a great technical hold exchange. Tanahashi takes Okada to the mat and the two begin trading grounded headlocks. Okada fights to his feet and gets a clean break and then pats Tanahashi’s chest mockingly. You’d think Tanahashi would expect that by now but he still falls for it and gets riled up. Okada hits a shoulderblock and ducks a leapfrog. Both an Okada Rainmaker and a Tanahashi dragon suplex get blocked. A chain grappling sequence ends in a stalemate, which leads to loud applause.

Tanahashi applies another headlock and keeps it locked in as Okada tries to shoot him off the ropes. He blocks a headscissor counter on the mat and traps Okada’s arm to make Okada escaping much harder. It takes a monumental effort and a long drawn-out struggle but Okada eventually powers out and counters into a headlock of his own. Okada likewise blocks a headscissor counter and tightens and wrenches his headlock to soften Tanahashi up for the Rainmaker. Okada switches to a chinlock but Tanahashi fights out, only to run into a back elbow. Okada gets a two-count off a swinging neckbreaker and goes back to the chinlock but Tanahashi fights out again. Tanahashi ducks the back elbow this time but Okada blocks a kick and lands a boot of his own followed by a snapmare/basement dropkick combo. Tanahashi fights out again, but this time Tanahashi blocks Okada’s boot and hits a dragon screw leg whip. Okada reverses an irish whip but Tanahashi hits a flying forearm. A slam/second rope senton combo gets Tanahashi a two-count. He teases charging for a slingblade but instead dropkicks Okada’s leg. Finally, something new out of Tanahashi. Then Tanahashi charges the ropes. Okada goes for a boot but Tanahashi catches it and hits another dragon screw. Tanahashi goes for a Texas cloverleaf but Okada gets to the ropes first. Okada tries escaping to ringside to recover but Tanahashi throws him back in and lands another running dropkick to the knee. Okada escapes again and Tanahashi chases him again, but this time Okada blocks being thrown into the ring and hits a DDT on the ringside mats. 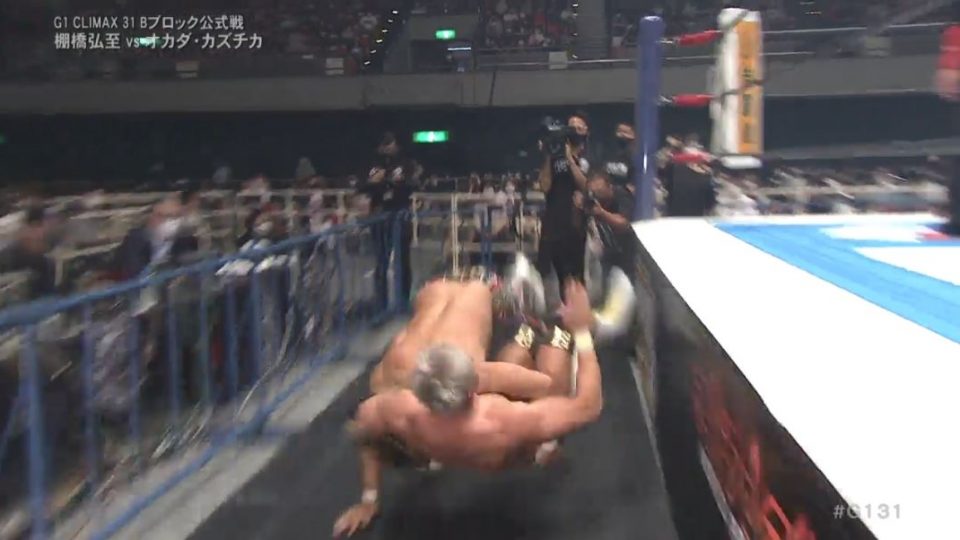 Back in the ring, Tanahashi hits some forearms but runs into a flapjack. Okada follows with reverse neckbreaker to the knee which really hurts Tanahashi but also slows Okada down. Tanahashi sidesteps to avoid a corner elbow but Okada counters a Tanahashi charge with his standing dropkick to the floor. Okada takes this time to recover a bit and then goes after Tanahashi on the floor. He sends Tanahashi into the barricade and goes for a boot over it but Tanahashi blocks and lands a third dragon screw. Tanahashi goes for his dive to the floor but this time Okada cuts him off. Okada goes for a Tombstone off the apron. Tanahashi fights out and hits a dragon screw through the ropes. This time Tanahashi makes it onto the top turnbuckle. High Fly Flow to the floor. Some things never change but this is still impressive.

Both men make it into the ring with Okada coming in second at the count of eighteen at the twenty-minute mark. He rushes Okada but Okada blocks and goes for another reverse neckbreaker. Wait, Tanahashi counters into his triple Twist and Shout twisting neckbreakers. A slingblade yields Tanahashi a two-count. Tanahashi’s High Fly Flow connects. But Okada rolls through and locks in his Money Clip. Tanahashi has never experienced this hold from Okada before. Tanahashi gets to his feet and reaches out for the ropes. Okada intercepts with a back/neckbreaker and reapplies the Money Clip. Tanahashi starts fading and the ref checks to see if he’s still conscious. Suddenly Tanahashi gets a burst of adrenaline and gets a ropebreak with his foot. 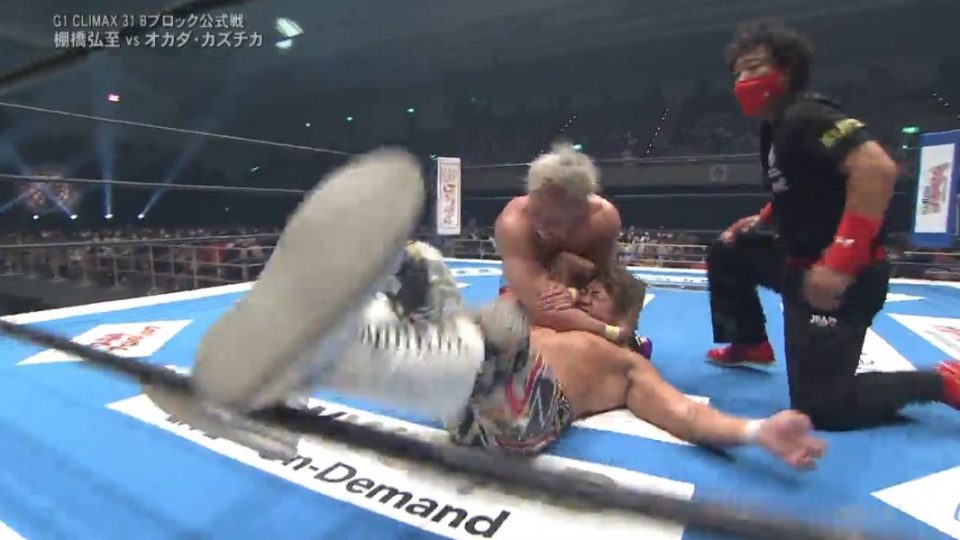 Okada goes for a Tombstone but Tanahashi blocks and tries his own. Both guys hit stiff forearms and keep trying to Tombstone each other but Okada has the power advantage and connects with his. Tanahashi ducks a Rainmaker lariat and goes for a sunset flip. Okada kneels down in a cradle pin but only gets a two-count. Shotgun dropkick by Okada. Both wrestlers collapse.

Bridging dragon suplex by Tanahashi. Okada kicks out. Strong style forearm exchange. Both of them stagger but keep hitting each other with all they’ve got.

Tanahashi lands a stiff slap and charges…and runs into a standing dropkick. Okada follows with a Michinoku Driver.

As expected, Tanahashi and Okada put on a tremendous match once again. These two have such amazing chemistry that even their worst matches are better than most other wrestlers’ best matches. And even though these Tanahashi/Okada matches are formulaic and repetitive as hell, they still find new ways to shake things up and do new things while still keeping to their larger winning formula.

The story of this match was how both wrestlers kept surprising each other with new counters to existing spots. Both wrestlers have their own formulas for their matches but this time they tried to think outside the box. Tanahashi hit new counters out of nowhere, such as when he teased a slingblade but turned around and dropkicked Okada’s knee instead. Okada went for a boot over the barricade but Tanahashi blocked it and hit a dragon screw. Tanahashi tried a sunset flip but Okada channeled his 2018 Dominion match with Omega and went for a simple kneeling cradle cover hoping it would bring him the win again. But most importantly, this match was about the Money Clip. Okada always targets his opponent’s head with his moves and this time he introduced the Money Clip to Tanahashi. And like with his earlier matches, his constant head-and-neck targeting made that finisher believable. It actually looked like Tanahashi would fade to the Money Clip at any moment and it took an incredible effort for Tanahashi to get a ropebreak. After that, it was yet another blistering and insane finishing sequence from these two. Once again they showed how great they are at countering each other and building incredibly tense moments.

However, once Okada hit his first Rainmaker it became a matter of ‘when’ and not ‘if’ for Tanahashi to expire. He remained defiant and tried fighting back as much as possible, but there was simply no turning back from that point. Okada’s strategy – formulaic and mechanical as it is – was much more efficient and effective. Okada expended less energy overall and still got the win while Tanahashi’s strategy wasn’t as focused and got worse results. Tanahashi targeted Okada’s legs but couldn’t get much out of doing so. He only managed to slow Okada down here and there but Okada still managed to hit all his biggest moves. Whether it was inconsistent leg selling or simply Okada recovering faster than expected, Tanahashi’s game plan didn’t work. And unlike Okada, Tanahashi didn’t have a back-up plan. He didn’t weaken Okada’s arms like he had in their earlier matches, and his own neck-targeting game was way less successful than Okada’s. In this match, Okada was more dynamic and smarter than Tanahashi because he had two avenues to get to the same conclusion while Tanahashi tried to stay in his comfort zone and it failed him.

This match had all the hallmarks of the great Tanahashi/Okada rivalry: incredible wrestling, fantastic counters, believable near-falls at the end, and plenty of tension. It wasn’t their best match, despite their best efforts at trying something relatively new. Even with a few surprises here and there, the match was still largely formulaic and meandering at several points. I think with a bit more variety from Tanahashi and some deeper selling from Okada, this would’ve been up there with some of their better matches from years prior.

That said, there’s something to be said about two wrestlers being able to feud for over a decade and still put out bangers whenever they do. These two really are two of the best in-ring performers active today. And if they don’t end up facing each other in this year’s G1 – or at all afterwards – then this is definitely a strong match to end their feud with.

And with that, the Tanahashi-Okada rivalry has come to a close, at least for now. Including this match, the score between them is now 4 wins for Tanahashi, 7 wins for Okada, and 3 draws. With all fourteen matches accounted for, let’s see how the rivalry holds up:

What an incredible rivalry it has been. A pleasure to watch and write about.