Welcome one and all to another installment of the NXT Spotlight here at TJRWrestling. Tonight we dive into more of the Dusty Rhodes Tag Team Classic, which coincides with the debut of Sanity. Also, Samoa Joe has put William Regal on notice. Will he get what he wants tonight? Let’s find out! 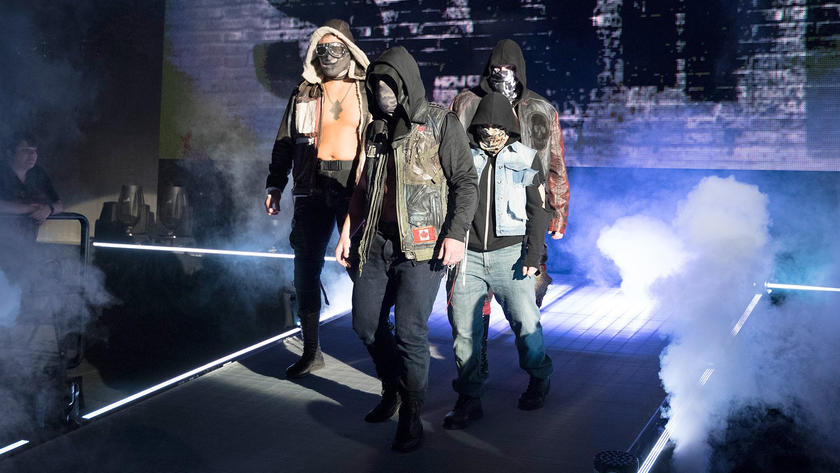 The greatness of Bobby Roode and Tye Dillinger come out first. They go back and forth on their gloriousness and perfect 10-ness. It was funny. The long awaited debut of Sanity is upon us and they have a really cool entrance and a very unique look. I liken it to a mix between a post apocalyptic group and criminals. It’s very post armageddon. The first two members who reveal themselves and are competing in this match are Sawyer Fulton and Alexander Wolfe. There are two more members on the outside, one male and one female, but they remained masked so we can’t see their identity. The bell rings and both members of Sanity attack Dillinger right off the bat. Fulton has a completely different look now. Obviously they’re not much for the technical wrestling. They beat the hell out of Dillinger and Roode acts like he’s coming in to help, but decides not to and then walks out on his partner. Dillinger sees what happens but obviously can’t do anything about it. Wolfe and Fulton get Dillinger up in a Suplex and then end up dropping him with a Suplex/Powerslam combo. Nice move.

Post match, the masked female beats on Dillinger and then reveals herself and it’s Nikki Cross. She continues to beat on Dillinger. The other masked man hits Dillinger with a wheelbarrow neckbreaker and only one man does that move, and sure enough, it’s Eric Young! The entire presentation of this group is awesome. There’s smoke and spotlights on them, as if a helicopter was trying to find them on the ground. I’m sold. Great stuff.

Backstage, Peyton Royce and Billie Kay and Billie is asked about her match tonight with Liv Morgan. They both laugh at Liv and mock her loss to Asuka. Billie says she’ll make their match last just a little longer because she’s going to enjoy beating her.

Now we see Bobby Roode leaving the arena. He’s caught up with and is asked about what happened out in the ring. Roode said that Dillinger is The Perfect Loser. Roode wanted nothing to do with this Tag Team Classic. He’s not a tag team wrestler. Dillinger begged him to be his partner and if he got hurt in the ring, that’s on him. 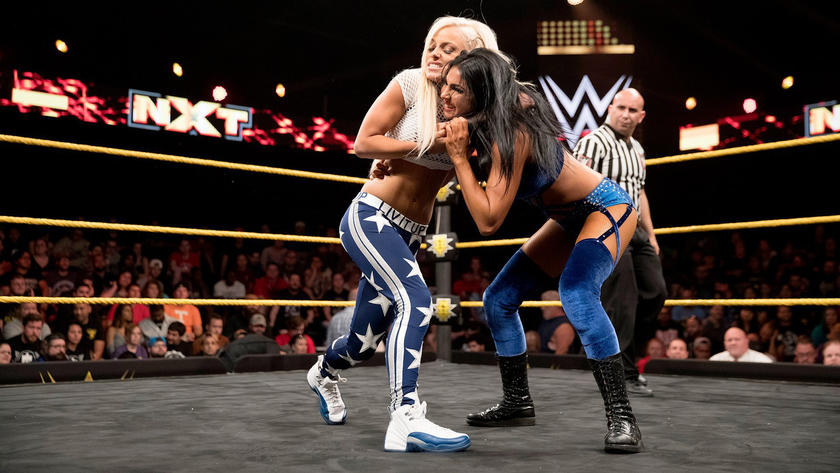 Morgan has been on my TV way too much as of late for my liking. Morgan gets a sloppy looking small package but Billie kicks out. Billie drops Morgan with a fireman’s carry. Morgan counters with a drop toe hold, then a shoulder tackle, then a dropkick to the spine. Morgan goes for a backslide but Billie kicks out. Billie then counters with a gutbuster. Billie rains down with some right hands in the mount position. Billie then gets Morgan up in a modified Torture Rack and then faceplants her to the mat. Morgan kicks out of a pin attempt. Morgan comes back with a modified STO but Billie gets up first. Morgan gets sent to the ropes but comes back with a clothesline and then a dropkick. Morgan comes off the ropes but Peyton Royce trips her from the outside and Morgan ends up stumbling right into a Billie Kay big boot and that’s the match.

Quick Plug: Be sure to check out this week’s episode of The Match Beyond podcast as Hank and Mark McAllen join me once again for Three Things on My Mind. We discuss Impact Wrestling’s current state, the use of gimmick matches in WWE, and we give our predictions for the Dusty Rhodes Tag Team Classic. This coming Monday, you definitely want to check out the show as my special guest is former WWE and ROH Tag Team Champion, Charlie Haas. This is a fantastic interview that I got to do with him in person and you do not want to miss this.

We get a recap of last week when Andrade Almas turned on Cedric Alexander after their match against The Revival. We go to post match comments from Almas. He says he is the best and Alexander is nothing and then says a lot in Spanish. 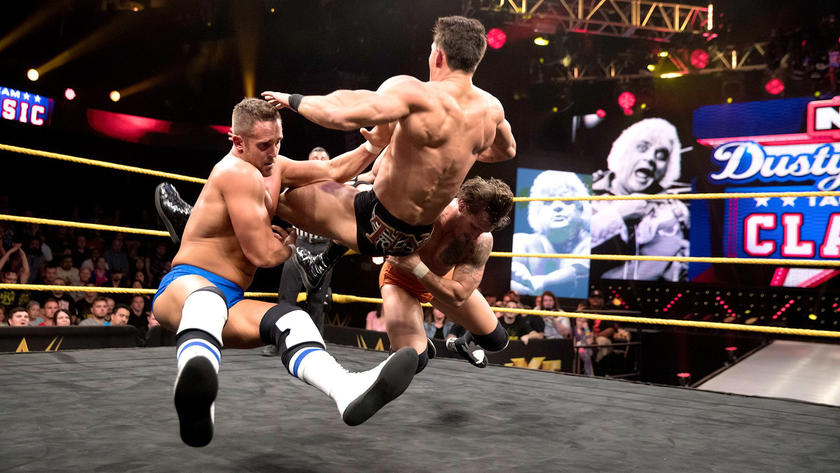 This is the NXT TV debut for both Moss and Sabbatelli. I’ll have more on Moss in my final takes, Spoiler Alert: it’s not good, but I’m legit happy for Sabbatelli after following him on Breaking Ground. Their theme song sounds like the opening song for Ballers. Great show. Moss and Nick Miller start the match. Moss pie faces Miller to start. Miller reciprocates. Miller gets a wristlock into a headlock. Moss shoots him off and drops Miller with a shoulder tackle. Miller gets up and chops the hell out of Moss. He gets control of Moss and tags in Shane Thorne. Thorne with a running uppercut in the corner, Miller back in the ring and TM61 with a lot of quick tags while working over Moss. They hit a double team moonsault and fist drop. Sabbatelli gets in the ring and is dumped immediately. Thorne then wants to go for a dive on Moss, but Sabbatelli gets up to low bridge the top rope and Thorne takes a spill to the outside. We go to commercial.

We come back to Moss and Thorne in the ring and Moss drops him with a suplex. Sabbatelli tags in and the crowd is split 50/50 on him. I guess a lot of people there watched Breaking Ground as well. A quick tag back to Moss as they work over Thorne. Sabbatelli hooks on a reverse hammerlock, wearing down the left arm of Thorne. Thorne manages to fight off but gets sent into the wrong corner. He ends up on the apron and tries a dive over the top rope back into the ring, but Sabbatelli catches him a nice looking powerslam. Thorne manages to kick out though. Moss tags back in. Thorne tries to fight his way out again but continues to get cut off. Moss goes for a suplex, but it’s reversed and then ends up in a jawbreaker. Miller tags in and takes out both of his opponents. He drops Moss with a long standing delayed vertical suplex. Sabbatelli comes in to break up the pin. He knocks Thorne off the apron while he’s at it. He becomes the legal man and goes for a powerslam on Miller but it’s blocked and Thorne gets tagged in. Thorne with a high kick to Sabbatelli in the corner and then hit him with Thunder Valley and they advance.

Next week we’ll see No Way Jose and Rich Swann vs. Tony Nese and Drew Gulak in a First Round Matchup 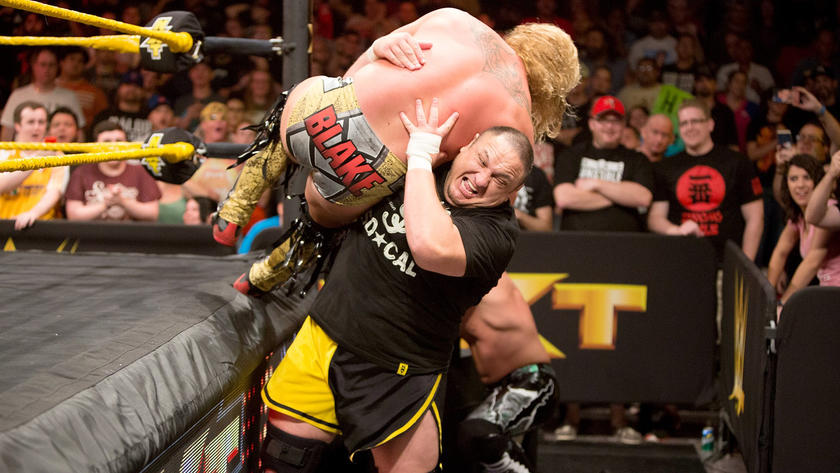 BAMF has finally boiled over to this fight against each other. They have an intense lock up to start, but the ref gets a clean break. Murphy then goes for a headlock. Both men counter headlocks and holds and then come to a stalemate. They both then go for a big boot and land them both on each other. They trade uppercuts and forearm shots. Blake slams into Murphy as he goes off the ropes, and then Murphy does the same to Blake, which sends Blake to the floor. Murphy then does a huge front flip dive over the top rope, taking out Blake. That’ll be it for the match though, cause here comes Samoa Joe!

Joe takes out Murphy immedately and sends him into the steal steps. Blake comes jumping off the apron but Joe catches him in a urinagi and drops him hard to the floor. He picks back up Murphy and gives him a urinagi on the apron. Joe gets in the ring and grabs a mic and yells for Regal. He says time is up. Bring him Nakamura or his championship.

After a quick commercial, Joe is waiting in the ring and then finally, Nakamura’s music hits! The champ is back. He is wearing a neckbrace but slowly takes it off and Joe looks in shock. Nakamura sprints to the ring and it is on! Both men trade blows in the ring and now tons of security break them up. They get free though and continue to brawl. They’re broken up again and Joe looks to be leaving. Nakamura takes out all the security that’s holding him back and now goes after Joe. The brawl continues on the rampway as everyone tries and fails to hold them apart. Nakamura finally gets dragged to the backstage area. Nakamura attacks more security and he’s back in the arena. Joe is trying his best to walk away and finally leaves the area. Nakamura ends up giving one of the security guards KINSHASA!!

Things look to be done, but Joe comes out of nowhere and comes after Nakamura again. They brawl back to the ring, there’s no security left, and KINSHASA!! Joe is laid out and Nakamura is red hot as our show ends. 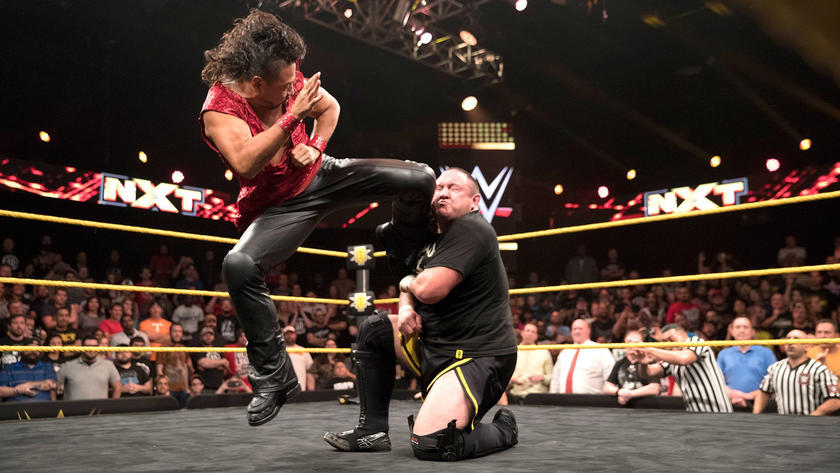 That’s it for this week. Next week’s Spotlight will be delayed by a day as I have a concert to attend next Wednesday, but I will be here for all the action and more matchups from the Tag Team Classic. So until next time, don’t do anything I wouldnt do. If you do though, name it after me.