Welcome back wrestling fans to your source for the most in-depth and exciting Ring of Honor review going today.  We have been treated to some great TV matches since Jay Lethal retained both of his championships at All Star Extravaganza, but it’s time for a little storyline progression.  Kevin Kelly and Steve Corino welcome us this week as usual.  They hype the TV title main event but we quickly get down to the action.

ACH leads this series 2-1.  The slowly ease into a tie up and trade arm drags back and forth.  Both men grab some holds on the mat with Sydal using his experience to take advantage of this exchange.  Sydal gets to his feet and trash talks ACH, allowing him to get up and resuming the tie up.  ACH takes down Sydal with a shoulder tackle.  ACH then cartwheels out of a head scissors attempt by Sydal but the veteran Sydal is able to kick ACH viciously to the floor.  ACH recovers on the floor and is able to take down Sydal with a springboard head scissor on the floor.  The action moves back to the ring and ACH hits a double stomp to the head of Sydal for a 2 count.  He then works the right arm of Sydal and tries another pin attempt for a 2 count.  Sydal fights back with chops and tries a standing moonsault but ACH reverses into a near fall as we cut to the first break. 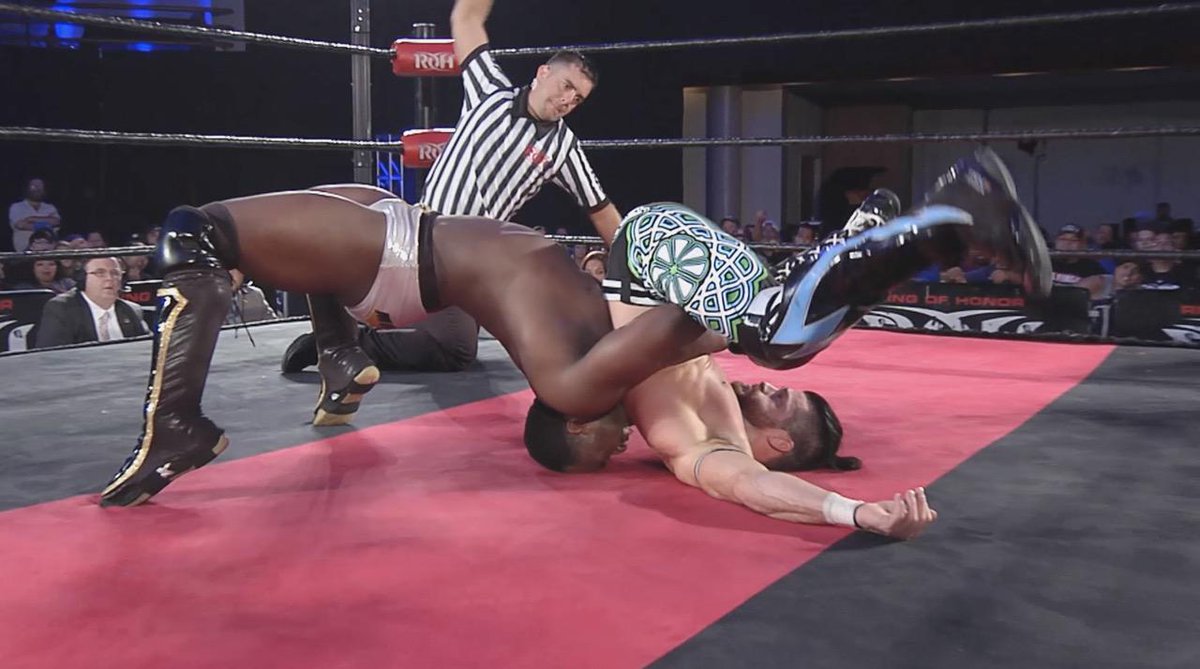 We return to see ACH dropkicking Sydal to the floor.  ACH follows this up by kicking Sydal in the head on the apron. Sydal recovers and uses his agility to land a kick of his own to the head of ACH.  The two exchange blows in the corner with Sydal coming out on top, nailing an Irish whip and an inverted backbreaker for a 2 count.  Sydal and ACH trade blows but Sydal sends ACH to the ground with a big roundhouse kick to the head.  Sydal covers lazily for the 2 count.  He tries again but ACH kicks out, only to be rolled up for another 2 count.  ACH gets to his feet, slides through an Irish whip, and gets a running elbow in the corner.  ACH then hits a snap German suplex with a bridge but only gets a 2 count.  ACH goes to the top rope but Sydal jumps up and hits an unbelievable hurricanrana that ACH flips through to land on his feet.  ACH then takes down Sydal with a corkscrew reverse DDT that only gets a 2 count.  ACH then hits the Get Over Here and heads up top for the Midnight Star but Sydal makes a cagey move to get to the floor.  ACH responds by hitting a shooting star press over the top rope that got the entire, previously divided crowd behind him.  Back in the ring, Sydal counters with 2 knees and head to the top rope but ACH counters him with a flipping kick and a brainbuster.  ACH then heads to the top rope for another Midnight star but Sydal gets the knees up.  Sydal then hits a reverse hurricanrana and goes up top to nail the shooting star press for the win.

Post-Match:  The Addiction plus Chris Sabin hit the ring and take down both Sydal and ACH before the break

My take:  This was a picture perfect TV match and was by far the best match I’ve seen in this series.  Everything clicked here, absolutely everything.  Sound psychology was used throughout and you never got the sense that they were trying to fit in as many moves as they could in their allotted time.  If you think cruiserweight style wrestling is just a bunch of spot monkeys doing flips, you owe it to yourself to watch this one.

We’re back to see that the Addiction plus Chris Sabin are still in the ring, with Kazarian saying that their World tag team championships of the world were stolen.  Kazarian gets some cheap heat on Texas and demands that justice be served.  Daniels takes the mic and says they weren’t pinned or beaten so they are still the champs.  He demands that the “champions” come out and bring the tag team belts for the Addiction.

We don’t get the Kingdom, but the All-Night Express, who made their return to ROH at All Star Extravaganza, head down the ramp to a huge pop.  Rhett says he hates to break up their party but the ANX party is in town and it doesn’t stop and it goes all night.  Kenny King says the road to the tag championships goes through the tracks of the All Night Express.  We get a brief faceoff before the break.

My take: This is going to lead to a match next week.  I love the depth of the ROH tag division and the return of the ANX helps stir things up a bit.  Looking forward to this one!

We’re back with Kevin Kelly making the announcement that during the break, Nigel McGuinness has signed a match for next week between the Addiction and the ANX.  It should be a good one! 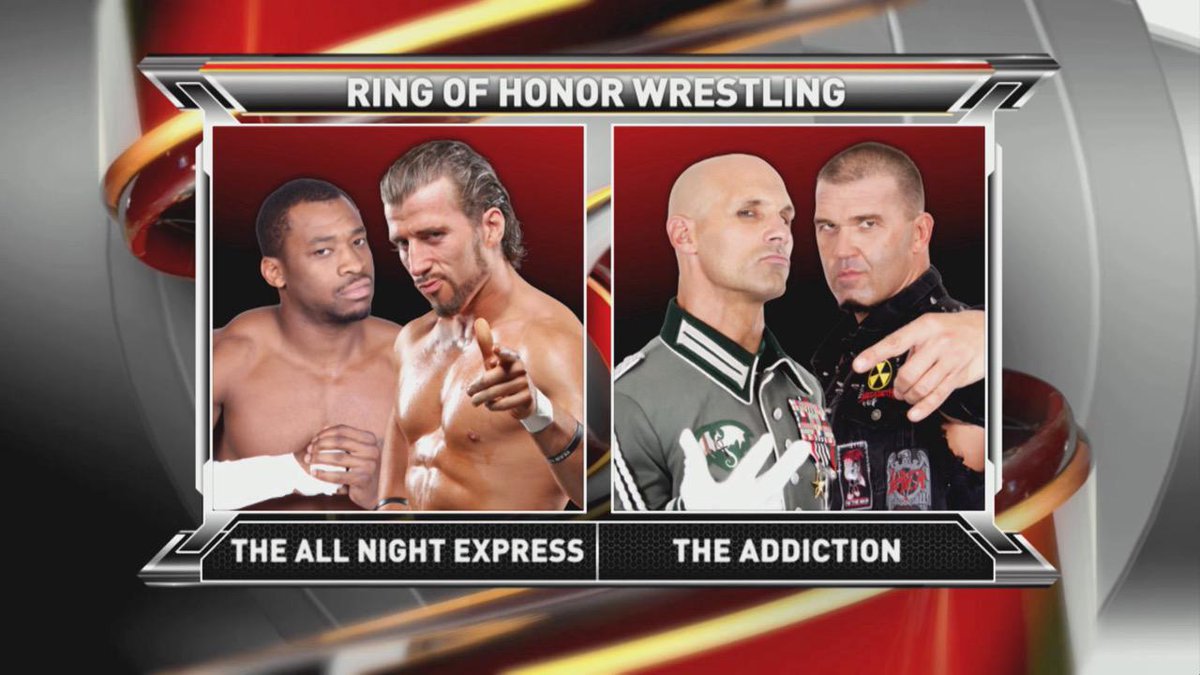 Kevin Kelly and Steve Corino then recap the Dalton Castle/Silas Young match where Silas won control of the boys.  Soon thereafter Silas Young and the Beer City Bruiser hit the ring with the boys in tow.  Silas says he told the boys to get some wresting gear on but they’re wearing this stupid Dalton Castle crap.  Silas knocks the mask off of them and says their first lesson is to learn to take a whuppin from a man. 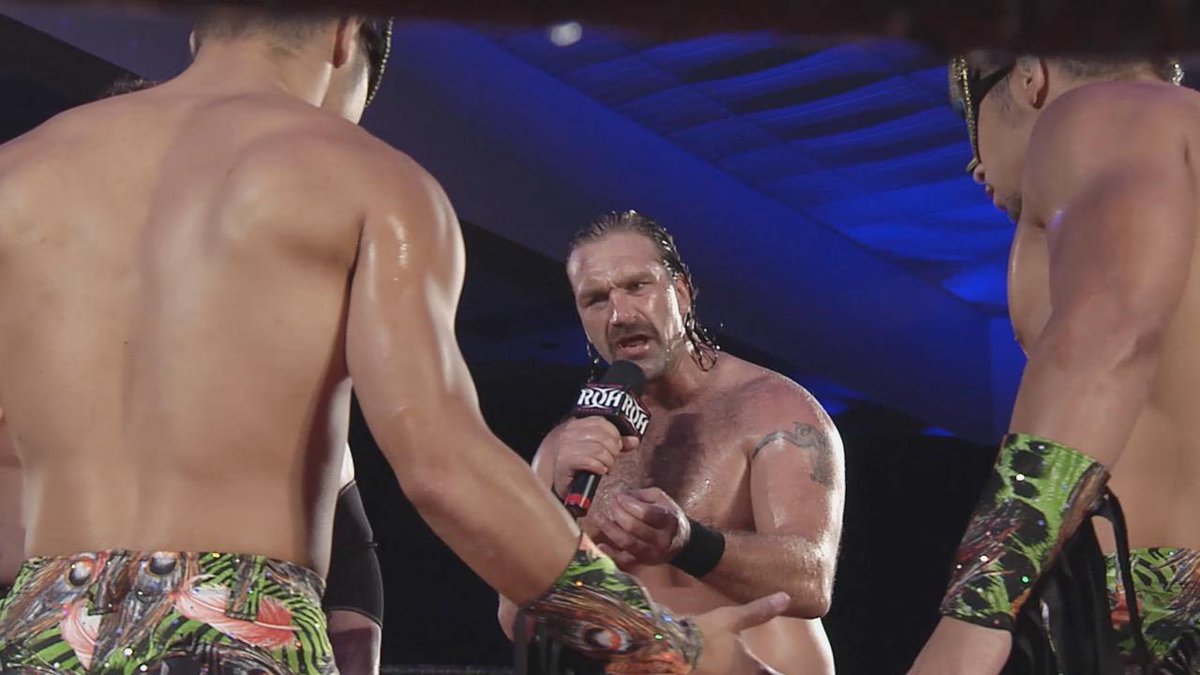 Winners:  Silas Young and The Beer City Bruiser via pinfall

My take:  Although I really wanted to see Silas Young lose to Dalton Castle and become one of the boys, this direction is going to be pretty fun.  The feud is not over and I want to see how Castle will be portrayed without his boys around.  The boys are a big part of the gimmick and the conclusion of this feud is going to be a big test for the Party Peacock.

Jay surprisingly shakes Watanabe’s hand but charges Watanabe from behind as soon as he turns his back.  Lethal then corners Watanabe and delivers a few strikes.  Watanabe hits a sidewalk slam but only gets a one count.  Watanabe is able to take control early and methodically works over Jay Lethal, chopping him around the ring before Lethal ducks out to the floor.  Watanabe follows him and throws Jay back in the ring.  Truth Martini takes down Watanabe when the ref is not looking and Jay hits 3 suicide dives onto Watanabe.  We cut to the break with the San Antonio crowd cheering loudly for Jay Lethal as he stands tall. 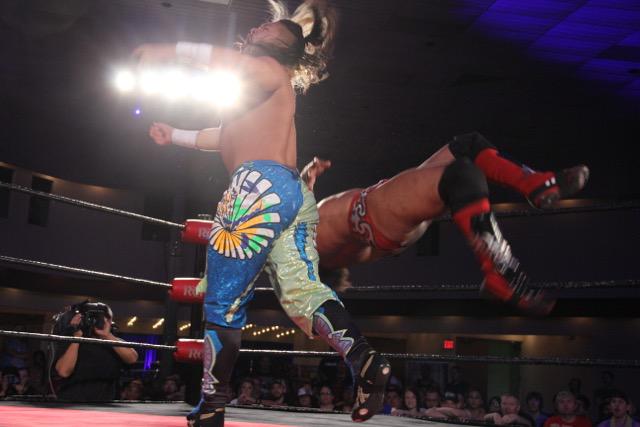 We’re back with Jay Lethal still in control.  Watanabe rolls to the floor but Lethal throws him viciously into the barricade.  Watanabe slowly rolls back in and Jay covers for a 2 count.  Jay then locks on a rear chin lock but Watanabe fights to his feet, only to be caught with a vertical suplex.  Jay continues to work over Watanabe, getting a 2 count from a big kick to the head.  Jay teases a big kick but just eases back into that rear chin lock.  Watanabe again fights to his feet and send Jay corner to corner several times before hitting a German suplex that turns Jay inside out.  Watanabe goes for a clothesline but Jay hits a bicycle kick.  He goes for the Lethal injection but Watanabe catches him and hits a lariat for the 2 count. Watanabe then pulls Jay to hit feet but Truth slides in the Book of Truth, distracting the referee and allowing Lethal to hit a low blow and the Lethal injection for the 3 count.

Post-Match:  Much to this dismay of Jay Lethal, the crowd erupts into AJ Styles chants as Lethal retreats to the back.

My take:  Even in defeat, Watanabe gets a decent rub; he’s come a long way from the NJPW job guy we were first introduced to.  The champ felt threatened enough to cheat to win in this instance which puts over Watanabe as a credible threat while simultaneously getting some heat on the champion.  The San Antonio crowd was awesome here when they erupted in the AJ Styles chants; it really enhanced the ending of the episode. 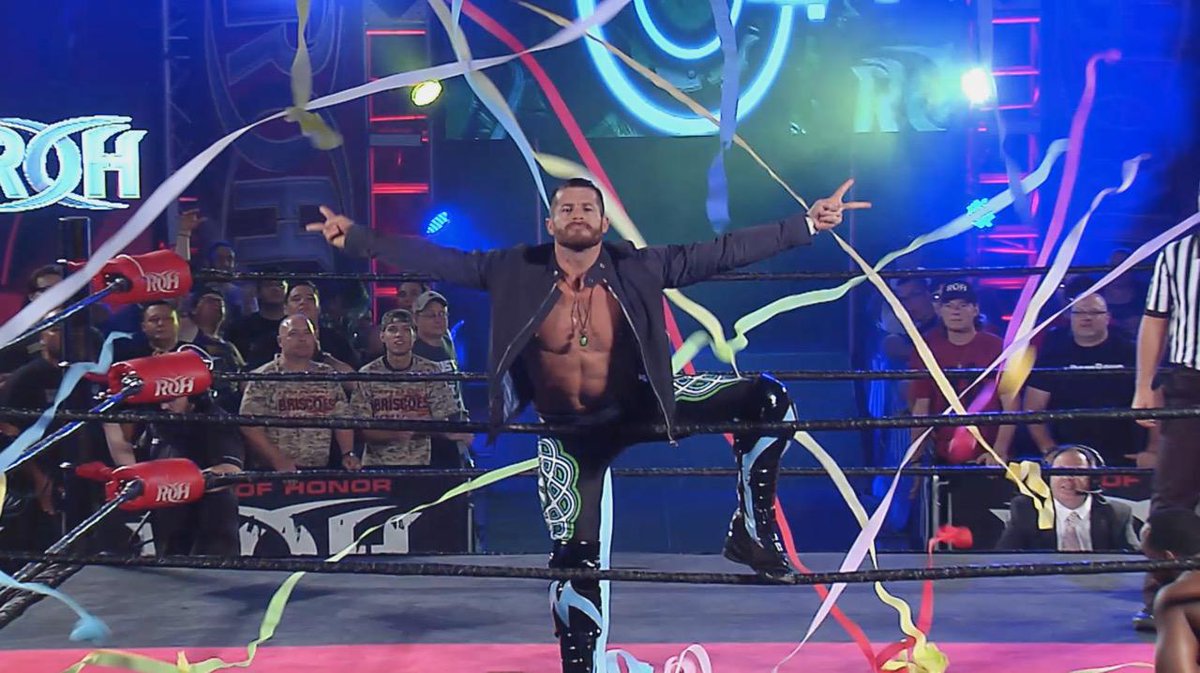 Honorable Mention:  Matt Sydal.  If ACH had won the match, he would be winning this prestigious award as well as the Radio Shack gift card this week.  I can’t praise the efforts of both men enough and I hope the winner of this series earns a shot at the ROH TV title.

Final take:  Once again, another quality hour of wrestling brought to you by ROH.  At their best, ROH fuses old school wrestling principles with modern day athleticism and this week was a perfect example of that.  We got a parental advisory from Kevin Kelly about the Jay Briscoe v Adam Page next week so I don’t know exactly what to expect, other than it should be a violent encounter.  ROH delivered this week and has been on roll as of late.  Most importantly, ROH left the fans hungry for more and I really hope this trend continues.

I want to play a bit with the format of this column so please send me any likes, dislikes, or suggestions in the coming weeks so I can make this a more enjoyable reading experience going forward.  Use the comments below, twitter, email, or whatever method of electronic communication tickles your fancy. As always, any input is very much appreciated.  Thanks for reading!

Jim Ross Blogs About His Thoughts On TNA And NJPW