The WWE NXT brand is heading to USA Network on September 18, but before we get there, we still have some WWE Network episodes to get through. The NXT Championship is on the line on this show, so let’s get to it.

Taped from Full Sail University in Orlando, FL, this is WWE NXT episode #368. Follow me on Twitter @johnreport.

The Breezango team of Tyler Breeze and Fandango entered with their Fashion Police look and a theme song to match. Matt Martel and Chase Parker entered as the opponents, who are from Quebec. The NXT announce team is Mauro Ranallo, Nigel McGuinness and Beth Phoenix. 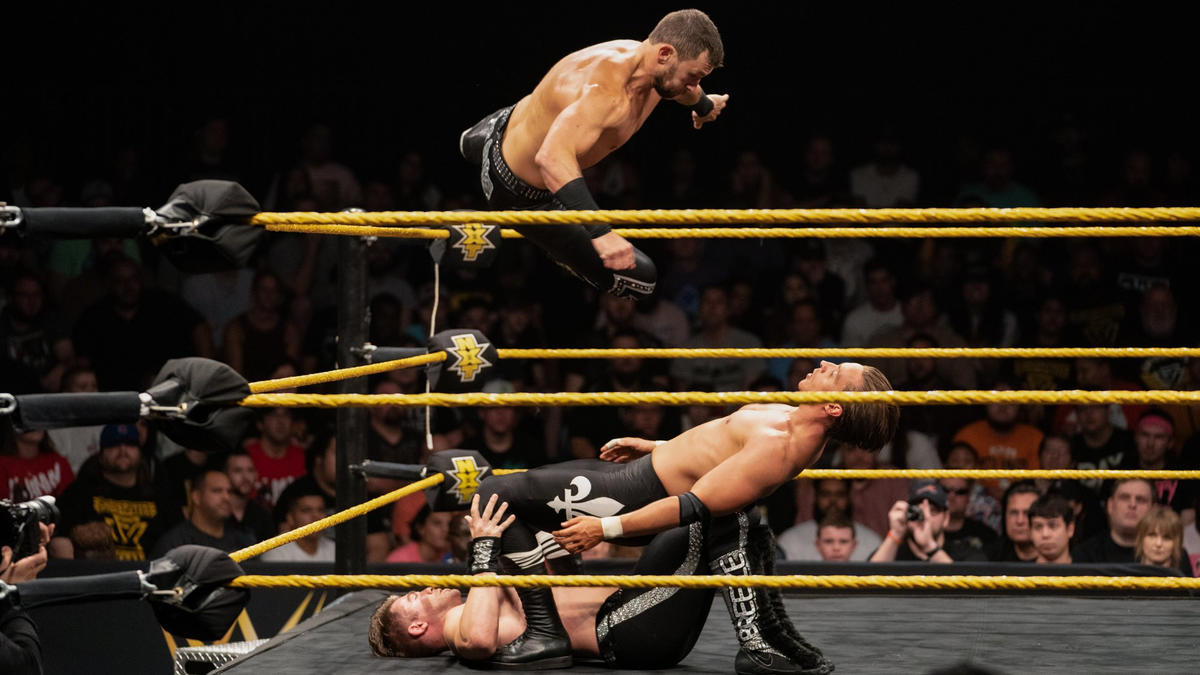 Three Canadians in this match with Fandango as the only American. There was a sunset flip attempt from Parker, Fandango stopped that, then he did a hip swivel and a leg drop. Breeze with a snap suplex on Parker, then a forearm to the face and corner forearm attack. Parker broke free with a punch, Martel tagged in and Breeze hit an armdrag on him. Martel whipped Breeze into a knee by Parker, who slapped on a wrist lock. Breeze hit a step up enziguri on Parker. Fandango got the hot tag with a clothesline, powerslams for both guys and a Falcon Arrow slam by Fandango. Breeze tagged back in, launched Parker into Fandango, who jumped over the top with a forearm to the chest while Breeze held Parker and it’s called the Fashion Faux Pas for the win. It went about four minutes.

Analysis: **1/4 It was a decent match to put over Breezango as they continue to build momentum as a team in NXT. I like their double team finisher. It looks pretty good and they can do it against anybody.

There was an Earlier Today video of Jordan Myles and Keith Lee arriving with Cathy Kelly there to interview Jordan. Myles said he was a bit nervous, but he was confident and Lee encouraged Myles about his match.

There was a shot of a parking lot with Io Shirai attacking Candice LeRae with a kendo stick. Referees showed up to break it up.

A commercial aired for WWE Clash of Champions on September 15.

There was a promo from Cameron Grimes with him being mad about not winning the NXT Breakout Tournament. Grimes said that his goal is to be the NXT Champion, which he said multiple times. Then he put on his hat and left.

Velveteen Dream, the North American Champion, made his entrance. It’s the best and most elaborate entrance in NXT with the fans reacting to him as a big star. Kona Reeves entered as the opponent. 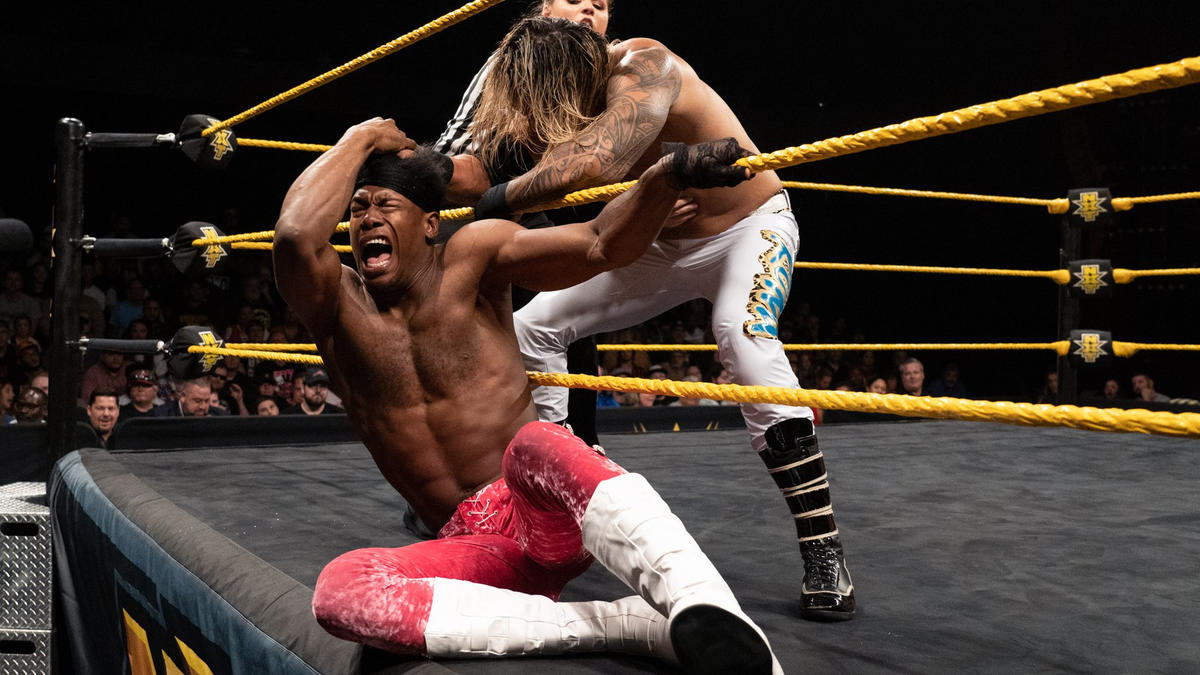 This is not for Dream’s North American Title. They did some posturing and trash talking to start. Dream with a dropkick, Reeves trapped the leg against the ropes and kicked him in the face. Reeves with a pump kick put Dream down. Reeves with a running knee to the head. Dream came back with a shoulder tackle, two punches and a double axehandle off the top. Dream with a shoulder to the ribs, sunset flip and Reeves tried to pin with his hands on the ropes, but the referee caught it. Dream with two superkicks and the Dream Valley Driver for the pinfall win after about four minutes.

Analysis: *3/4 A nice win for Dream to continue his momentum as the North American Champion. Reeves doesn’t impress me that much. I think he’s very basic and needs to do more in the ring. Dream’s selling was good. The finish was a bit flat for the match.

After the match, Roderick Strong appeared on the video screen saying that Dream said that Strong needed to do something to get his attention. Strong was standing beside Dream’s couch, which was on fire somewhere backstage. Strong asked if he had Dream’s attention now. Dream was upset about the couch.

Q: How fired up is @roderickstrong?

A: He literally just set @VelveteenWWE's couch on FIRE!!! #WWENXTpic.twitter.com/brWU4KrtNx

BUT WAIT THERE’S MORE: After NXT aired, WWE announced Velveteen Dream vs. Roderick Strong for the North American Title on September 18 when NXT debuts on USA Network. That should be an outstanding match.

There was a WWEShop commercial.

A video package aired about Rhea Ripley confronting NXT Women’s Champion Shayna Baszler last week. They have a match against eachother next week. 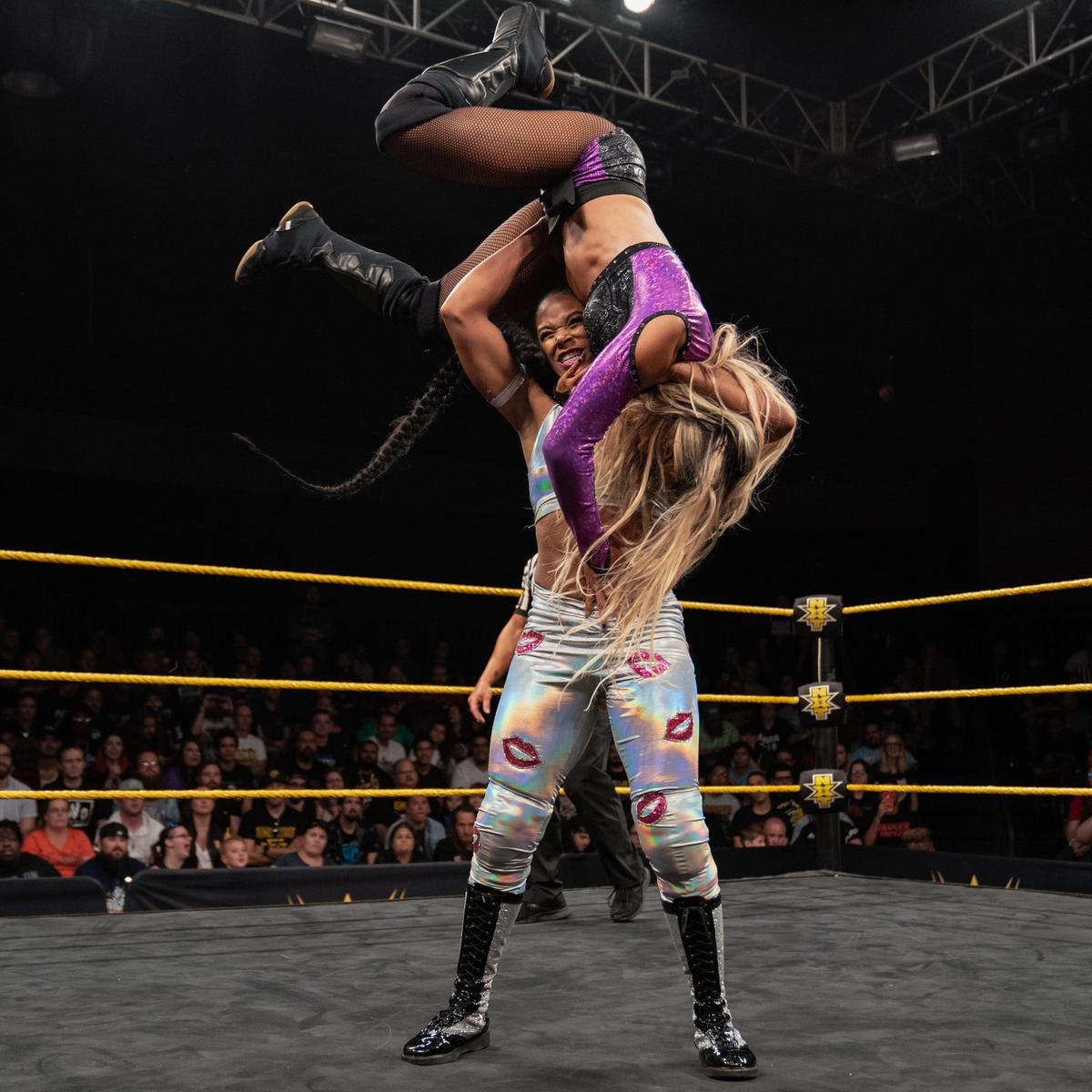 Conti with a monkey flip into a pin attempt and then a sunset flip got a two count. Belair with a shoulder tackle. Belair with a dropkick to send Conti into the turnbuckle. Belair landed on her feet after a monkey flip attempt, but then Conti sent her into the turnbuckle. Conti with a kick followed by a headlock while Phoenix and McGuiness talked about the mean streak that Conti was showing. Conti with a judo toss takedown, Belair blocked a kick and got a rollup for two. Conti with a bicycle kick for a two count. Conti with a double knee attack while Belair was against the turnbuckle and Conti used her legs to bring Belair over the top to the floor. Conti with a cross body block attempt on the floor, but Belair caught her and hit a fallaway slam on the floor. They got back in the ring with Belair hitting a hair whip slam. Belair with a handspring into the ropes leading to a moonsault to the back. Belair kipped up to get back to her feet. Conti blocked a suplex, Belair with a forearm, Belair put Conti on her shoulders and hit the KOD (Kiss of Death) sitout slam for the pinfall win after about six minutes.

Analysis: **1/2 Good match where they made the most of the time given and had a competitive match. They are two women that are on the rise. I was impressed by the aggressiveness of Conti and she had some cool moves in there. Belair was impressive in making the comeback. Belair is an incredible athlete and I’m excited about her future.

Adam Cole, the NXT Champion, was shown getting ready for his title defense in the main event.

A video aired about WWE’s fight against Pediatric Cancer.

Next week on NXT: Johnny Gargano addresses his future.

There was a video with NXT General Manager William Regal. Regal announced that in two weeks there will be a #1 Contenders triple threat match for the NXT Women’s Championship between Mia Yim, Bianca Belair and Io Shirai.

Jordan Myles made his entrance to a good pop. He won the NXT Breakout Tournament. You may know him as ACH from his pre-WWE days. He’s a very talented wrestler.

Adam Cole, the NXT Champion, made his entrance with fans doing the “BAY-BAY” chant right on cue as usual. The Undisputed Era theme song is one of my favorites in all of WWE. 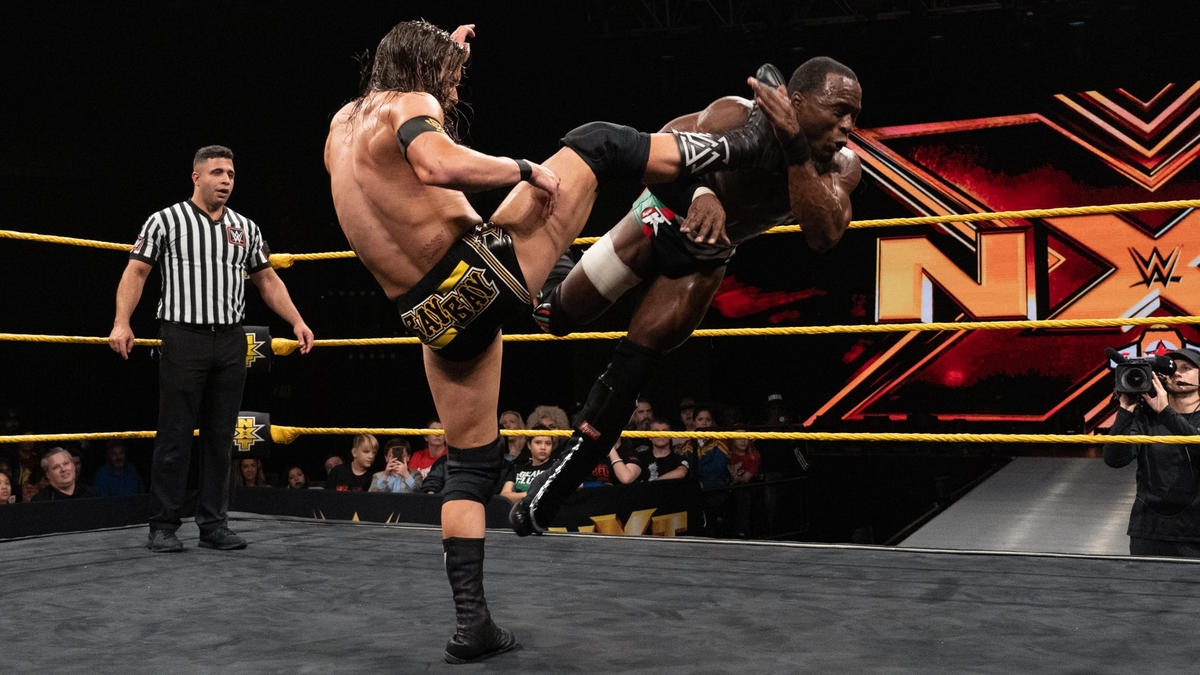 Cole was in control for a few minutes with a side headlock to keep Myles grounded. Myles came back with a hiptoss followed by an armbar. Cole drove Myles to the ropes, kick to the ribs and Myles hit a dropkick to knock Cole out of the ring. Myles to the apron, Cole avoided a kick and pulled the leg to send Myles crashing to the floor. Cole whipped Myles hard into the steel ring post. Back in the ring, Cole sent Myself hard into the turnbuckle. Myles tried to get back into it, but Cole whipped Myles into the ropes with Jordan bouncing off the middle ropes. Cole grounded Myles with headscissors around the neck. Cole worked over Myles with punches, then told him to give him his best. They exchanged punches. Myles got in some jabs, then two forearms, a sweep kick and a dropkick to the head led to Cole bailing to the floor. Myles with a dive over the top onto Cole on the floor. The fans chanted “Jordan” now and it was time for some Air Jordan with a cross body block off the top for a two count. Myles with a deadlift German Suplex for a two count. Cole to the floor, Myles ran the ropes and Cole hit a jumping kick to the head for two. Cole went for a slam, Myles fought out, Cole with a step up enziguri and a backstabber got a two count. They each went for moves that didn’t work, Myles to the turnbuckle and Cole kicked him down. Cole slapped on the Figure Four Leglock, but Myles was quickly able to get to the ropes to break the hold. Cole set up Myles on the top rope for a superplex tease, but Myles punched him down. Myles jumped off the top and Cole kicked him in the head to stop him. Cole hit the Ushigoroshi (suplex into the knee) for a two count with Cole looking shocked that Myles kicked out. Myles with a springboard dropkick, then the penalty kick on the apron and Cole went to the floor again. Myles wit the suicide dive. Back in the ring, Myles hit a Superfly Splash off the top rope for a two count. Good nearfall with Ranallo screaming about how Myles was one second away from realizing his dream. Myles slowly climbed up top, he went for a 450, Cole avoided it and Myles hit a superkick to the face. Myles went for the Midnight Star 450 Splash, but Cole got the knees up to block it. Myles avoided the Last Shot knee, he got a rollup for two, Cole hit a superkick to the face, superkick to the back of the head and Cole hit the Last Shot running knee to the back of the head for the pinfall win after 15 minutes.

Analysis: ***1/2 That was a great match with Cole finding a way to win against a guy that is new to NXT fans. It’s a smart way to book Myles because even though he failed, he showed that he belongs. There were some good nearfalls for both guys, especially when Myles hit that splash from the top. Cole blocked a second splash off the top, which led to the finish with Cole winning. Ranallo pointed out that Cole’s timing for everything he does is perfect and I agree. Cole makes it look so easy. I wish the main roster would book their main champions in matches against opponents that are lower on the card in order to show how talented some of these guys are.

The main event between Cole and Myles was clearly the highlight of the show while the other three matches were shorter. There weren’t any significant promo segments either. It wasn’t as good of a show as last week, but it was still a fun show with a competitive NXT Title match that put over Cole while showing that Myles can hang with the best.

Next week is the last NXT episode that will air exclusively on WWE Network. NXT on September 18 will debut on USA Network in the US.