This week’s AEW Rampage featured Jay White in his first AEW match against Trent Beretta while Powerhouse Hobbs faced Dante Martin in a “Face of the Revolution” Qualifying Match.

Rampage also aired at an earlier time on TNT in the US this week at 7pm ET instead of 10pm ET due to NBA All-Star weekend coverage on TNT.

This is AEW Rampage from the Nashville Municipal Auditorium in Nashville, Tennessee. It was taped on Wednesday after Dynamite. Follow me on Twitter @johnreport. Let’s get to it.

It’s Friday and you know what that means. Excalibur was on commentary welcoming us to AEW Rampage “Slam Dunk” since it was for NBA All-Star weekend. The other guys on commentary were Taz, FTW Champion Ricky Starks and the yeller Chris Jericho.

Adam Cole was up first with a 10-0 record as the number one ranked singles wrestler because they don’t count his loss to Orange Cassidy since that was a Lights Out match. Ten of the Dark Order was the opponent.

Ten is also known as Preston Vance. He wrestles with a mask. Ten knocked Cole down with a shoulder tackle. Cole got in some punches, then Ten with some elbows, Cole missed a jumping kick and Ten hit a German Suplex across the ring. Ten with corner punches, Cole slipped out and hit a superkick to the left knee with Ten wearing a knee brace on the left leg. Cole rammed the left leg into the ring post. Cole with a neckbreaker. Ten hit a suplex, Cole back up and he kicked the knee of Ten. When Ten went out to the floor, Cole rammed the knee into the steel steps. Back in the ring, Cole wrapped the left leg against the ropes, Ten tried to charge and was selling the knee, so Cole hit a pump kick. They went to a 90-second picture in picture break.

The bigger man Ten got some momentum going with a spinebuster. Cole got out of a Full Nelson attempt with an enziguri kick and backstabber for a two count. Cole went for Panama Sunrise, Ten with a back body drop, Cole with some shots and then Ten hit a huge discus lariat that looked brutal with Cole doing a hard bump onto his head/neck. Ten tossed Cole across the ring, but then Cole came back with a jumping knee to the head. Cole went to the middle rope and jumped off with Ten catching him with a Spear to counter for two. Cole kept on countering Full Nelson attempts and turned it into a two count. Ten managed to apply the Full Nelson submission, but Cole went towards the referee near the ropes and hit a low blow kick to the groin. The referee never saw it. Cole with a superkick to the front of the head, a superkick to the back of the head and then a Boom running knee for the pinfall win after ten minutes.

Analysis: ***1/4 The great Adam Cole picked up the win with some heel craftiness thanks to the low blow leading to the superkicks and the finish. A competitive match with Ten getting plenty of offense before Cole predictably put him away. Cole needed a cheap shot to win, so that puts over Ten as a guy that’s tough to beat. You could say it weakens Cole to do that, but I don’t mind it in this case. I think they should use Ten more often because he’s got an impressive look and moves well for a powerful guy. The problem is that the roster is so big that it’s tough to use everybody.

After the match, Cole was greeted by his buddies Kyle O’Reilly and Bobby Fish on the ramp. They celebrated the win.

A video aired about CM Punk vs. MJF at AEW Revolution on March 6 in a Dog Collar Match. 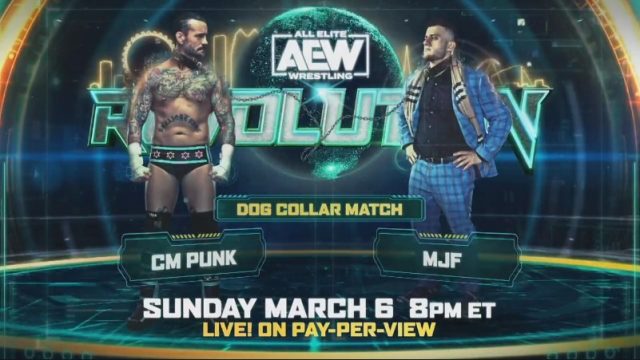 Powerhouse Hobbs was up next in the Face of the Revolution qualifying match. Hobbs is 41-17 in AEW and third in the rankings that are supposed to matter. Dante Martin was up next with the announcers noting it was 1-1 in the series of matches between these two guys.

Hobbs hit a running corner splash before Martin could take off his shirt. The bell rang after that. Martin with two jumping kicks to the head, Martin went for a springboard attack and he jumped on Hobbs’ back with a sleeper attempt. Martin with two impressive dropkicks to send Hobbs out of the ring. Martin went for a springboard attack to the floor, so Hobbs grabbed the rope and knocked him down. Hobbs lifted Martin with a suplex over the top to the apron leading to Hobbs hitting a clothesline to knock Martin off the apron to the floor. Hobbs left the ring to whip Martin into the barricade. Hobbs launched Martin back into the ring. Hobbs got a hold of Martin and launched him across the ring. Hobbs did it again with a huge toss across the ring. They went to a picture in picture break.

The match continued with Martin getting some strikes to the face and then Hobbs hit a running cross body block to knock him down. Martin got some momentum going after Hobbs missed a knee drop, so Martin jumped off the ropes with a springboard forearm. Hobbs to the floor, Martin up top and hit a tornedo (as called by Excalibur) that was a twisting dive onto a standing Hobbs. Back in the ring, Martin was up top and hit a missile dropkick for two. Hobbs got back into it with an impressive spinebuster and that was it for the pinfall win after nine minutes.

Analysis: *** It was another good match on this show. Hobbs was in control for the first half and then it got better when Martin came back with some offense. I was surprised by the finish because Martin hit a bunch of moves in a row, came close to winning and then it took one move from Hobbs to get the win. There aren’t a lot of matches won by a simple spinebuster like that. At least in the case of Hobbs, it looked really impressive when he did it, so I don’t mind it as a finisher.

Jade Cargill, the 27-0 TBS Champion, was interviewed with Smart Mark Sterling by her side and Tony Schiavone was conducting the interview. Matt Hardy showed up with The Bunny saying that The Bunny should be the next challenger. There was some trash talk between them and the match was on for next week.

There was a clock counting down from 5:00 for Serena’s challenge. Serena did a double leg takedown, then a snapmare and a boot grind to the face. Serena with a running clothesline against the turnbuckle and a catapult sending Risk throat first into the bottom rope. Serena with a Powerbomb. Serena applied the Serenity Lock submission and Risk tapped out. They didn’t show the clock at the finish like they should have. It ended at 1:57.

Analysis: * Easy win for Serena as usual in one of these five-minute challenges. They are building up for some unknown wrestler to survive the five minutes or have another woman on the roster in that spot. I don’t know who, but it’ll happen at some point soon.

A video aired about the story between Bryan Danielson and Jon Moxley, who told Bryan he won’t stand side by side with somebody until he bleeds with them first. That means Moxley wants to face Danielson in a match.

It was time for the main event interview conducted by Mark Henry. Jay White and Trent Beretta did split screen interviews with White saying he was there to remind Trent that it was still his era. Trent welcomed Jay to AEW, welcomed him through the Forbidden Door, and said he’s going to slam the door in the face.

They plugged AEW Revolution. These two matches are official:

There were other matches mentioned, but those two are now official.

Jay White entered first for his AEW debut match. Trent Beretta was next with Orange Cassidy joining him. Excalibur noted they have wrestled in tag team matches, but not in a singles match before.

White got in some strikes early, but then White was running the ropes and Trent hit an elbow to the head. Trent got a hold of White leading to an overhead suplex across the ring. White drove Trent’s neck across the top rope. They left the ring with White sending Trent into the barricade and ring apron. Trent whipped Jay into the barricade. Trent with a clothesline while on the floor. Back in the ring, White picked up Trent with a suplex over the top to the apron to the floor. That was a painful bump leading to a picture in picture break.

White was in control with a suplex ribs-first across the top rope. White with a knee to the ribs. Trent got a hold of the arm and whipped White into the turnbuckle with White going hard into the turnbuckle. Trent jumped off the middle ropes with a moonsault with White missing the catch a bit, so Trent hit the floor hard. White should have done a better job of taking that bump. Back in the ring, Trent wanted a DDT, White got out of it and hit a flatliner. White with a bridging German Suplex for a two count. Trent came back with a Tornado DDT for two with Excalibur screaming about the nearfall. Trent with forearms to the face followed by a dropkick while White was by the ropes and White bumped to the floor. Trent went for a Spear on the floor, but White got a knee up to block it. White suplexed Trent into a chair that was up against the barricade. Ouch. Back in the ring, White with a uranage slam for a two count. White with a hard chop, but Trent came back with a belly to back suplex. White went for a Bladerunner attempt, Trent got out of it with a half nelson suplex and then a running knee for a two count. They got back up to their feet as they exchanged forearms, White with a chop to the throat and White did a palm strike to the stomach. White with forearms, but Trent came back with a lariat. Trent hit a piledriver for two. White got a hold of Trent and hit the Bladerunner neckbreaker for the pinfall win after 14 minutes.

Analysis: ***3/4 Great match. They got a lot of time, it was an even matchup and White managed to put him away, which is the smart move since it was White’s AEW debut. They really did book this in a way to show that Trent could hang with White since he came close to winning a few times. White came back from a piledriver and hit a Bladerunner neckbreaker for the win. I liked this match a lot. White is yet another talented wrestler that AEW will hopefully use well while they have him.

Post match, White taunted Orange Cassidy a bit after the match. That should set up a match between them.

It was the usual good episode of Rampage with three matches around the three-star level and then the other match was shorter. They didn’t do much in terms of promos.

White was impressive in the main event with Trent and I expect White to do well while he’s in AEW. They have a lot of talented wrestlers. No doubt about that.