Hear Ye! Hear Ye! All Hail King Xavier Woods! Yes, you read that right. Xavier Woods is the 2021 King of The Ring after defeating Finn Balor at Crown Jewel.

This is something that Xavier has dreamed about and made his primary goal since before he broke into the business. There were a couple of moments where I thought WWE was actually going to rip the King of the Ring out of Xavier’s hands but I’m glad they gave him and the people what they wanted. Of course, both of us being from the Atlanta, Georgia area, home of Your World Series Champion Atlanta Braves, certainly helps in my excitement.

World Wrestling Entertainment gave Kofi Kingston his moment by winning the WWE Championship at Wrestlemania 35. They gave Big E his moment by cashing in his Money in the Bank contract and winning the WWE Championship on Raw. I’m glad they gave Xavier Woods his moment by winning the King of the Ring at Crown Jewel. It is also refreshing seeing Xavier Woods finally get his time in the spotlight. Kofi and Big E have had their extended singles runs, but Woods has always been the tag team wrestler since New Day started seven years ago. At times, Woods has been more of a cheerleader for his New Day buddies. Even during his previous run in TNA, Consequences Creed was mostly a tag team guy. 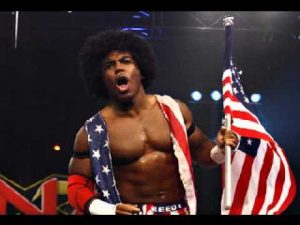 Austin Watson debuted for TNA at the Bound For Glory event in 2007 as a replacement for Adam “Pacman” Jones teaming with Ron Killings as “Truth and Consequences”. He signed a contract with TNA, but the tag team was short-lived as Ron Killings was granted his release from TNA, which left Creed in limbo with no direction. He made his return to TNA television on the April 10, 2008 episode of Impact where he defeated Jimmy Rave to qualify for the X-division Xscape match at TNA Lockdown. Creed fought hard but eventually got eliminated by Curry Man. He wrestled in the X-Division a little while longer, losing the first-ever TerrorDome match (won by Kazarian), and losing X Division Championship matches to Petey Williams and Sheik Abdul Bashir. It was what happened next that is probably his greatest moment in TNA.

Jay Lethal had what was called a Feast or Fired briefcase. Feast or Fired is essentially a Money in the Bank concept where there are four cases. Three contain championship title matches and one contains a pink slip. Lethal had the briefcase that granted him a shot at the TNA World Tag Team Championships. On the January 8, 2009 episode of Impact, Jay Lethal chose Consequences Creed to be his tag team partner. They would go on to defeat Beer Money’s Bobby Roode and James Storm for the TNA World Tag Team Championships. They would hold those titles until Against All Odds 2009 when Beer Money would win back the TNA World Tag Team Championships. Creed competed in several X Division Championship matches after that, all won by Suicide. Lethal Consequences and Eric Young also lost to the Motor City Machine Guns and Sheik Bashir. Lethal Consequences lost to the Motor City Machine Guns at Bound for Glory 2009 before Austin Watson was released from TNA in 2010.

SIGNING WITH WWE AND FORMING THE NEW DAY 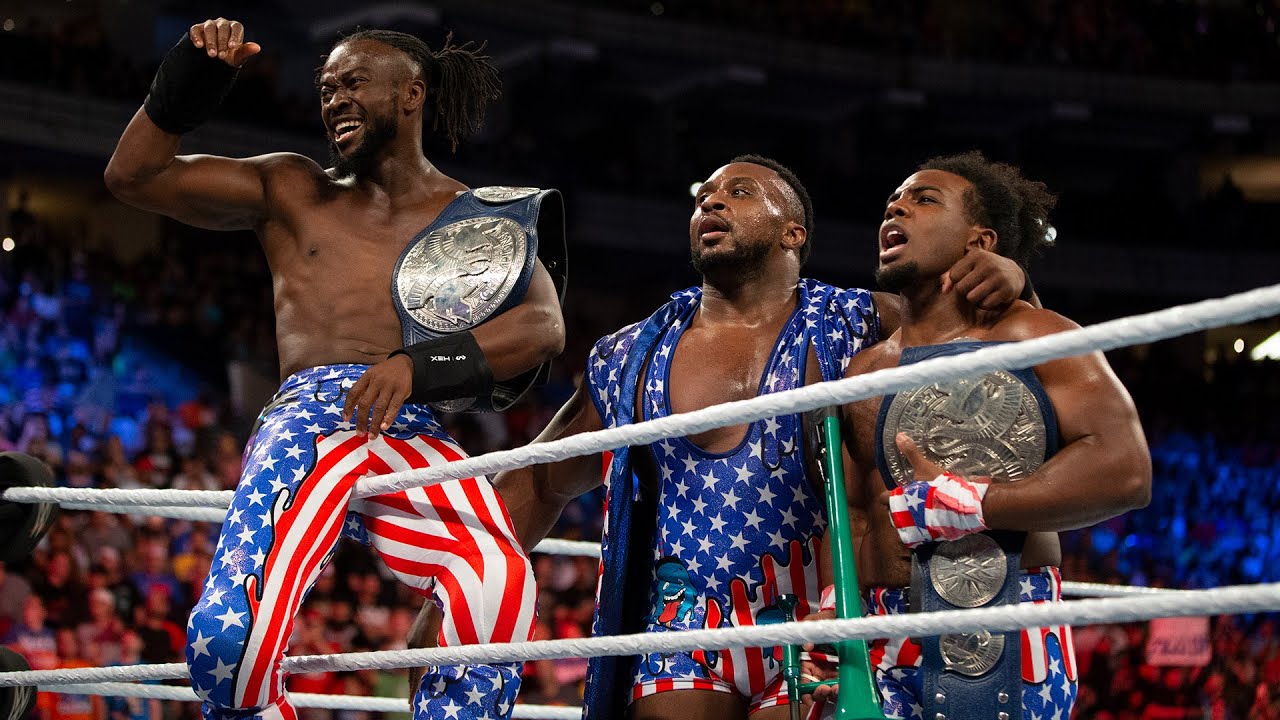 After a very brief run in NJPW, Watson signed with WWE in July of 2010. After spending a few years in developmental, he made his main roster debut in November of 2013 as, you guessed it, part of a tag team with former TNA tag team partner Ron Killings. The team didn’t really go anywhere and was disbanded midway through 2014. On July 21, 2014, Woods would align with Big E and Kofi Kingston in what would later become The New Day. The New Day had some ups and downs as a tag team. They tried the babyface thing when they first debuted their new gimmick, but it wasn’t accepted by the fans. They eventually turned heel for several months, racking up a couple of World Tag Title reigns in the process.

The New Day currently holds the record for the longest reign as Tag Team Champions at 483 days. The New Day would go on to host Wrestlemania 33 while winning 11 World Tag Team Championships, defending most of those under the famous “Freebird rule” where any two members of a tag team can defend the tag titles. Even though The New Day enjoyed so much success and so many accomplishments, Xavier Woods had still yet to have that one successful singles run or accolade.

One thing The New Day has always been about is brotherhood. They have been adamant about never turning on one another, and each other’s individual success never seems to get in the way of the bond they’ve formed. They always seem to support each other no matter what. The perfect example of that is “KofiMania” in 2019. Kofi Kingston replaced Mustafa Ali in an Elimination Chamber match for the WWE Championship. Daniel Bryan won that match but Kofi’s performance started to get the crowd even further behind him. It was sort of the same situation as the Yes Movement in 2013-2014 where Daniel Bryan wasn’t the chosen guy for Wrestlemania 30 but the fans made it apparent he was their guy. The same for Kofi Kingston in 2019, ironically against WWE Champion Daniel Bryan. Vince McMahon played a role, stating he didn’t think Kofi was good enough. Eventually, after a grueling tag team gauntlet won by The New Day, Kofi Kingston got his WWE Title match at Wrestlemania 35. Kofi Kingston would go on to defeat Daniel Bryan at Wrestlemania in one of the greatest moments in WWE history. Byron Saxton’s commentary was tremendous here. Seeing the emotion on Xavier’s face as they celebrated is an image I don’t think I will ever forget.

Unfortunately, Xavier Woods would suffer an Achillies injury in October of 2019 that would sideline him for up to a year. During that time, Kofi Kingston and Big E would defend The New Day and win the Tag Titles in the process. During that time, Kofi Kingston also suffered an injury that would keep him out for several weeks. Kofi then gave Big E a speech in the locker room that basically said it was Big E’s time and Kofi and Woods would support him. On October 9, 2020 episode of Smackdown, almost a year to the day of Woods’ injury, he returned alongside his New Day brother Kofi Kingston to win the Smackdown Tag Team Championships from Cesaro and Shinsuke Nakamura. Immediately after the match, as a part of the 2020 WWE draft, The New Day were split from Big E as Woods and Kingston were drafted to Raw. They swapped Tag Team Titles with the Raw Tag Team Champions the Street Profits (who were drafted to Smackdown).

Woods and Kingston would go on to wrestle as The New Day on Raw while Big E won the Intercontinental Championship on Smackdown. All three members of the New Day came up short at Wrestlemania 37 as Woods and Kingston lost the Raw Tag Team Titles to AJ Styles and Omos and Big E lost the Intercontinental Title to Apollo Crews. The New Day would then enter into a feud with WWE Champion Bobby Lashley which resulted in Bobby Lashley destroying Woods inside Hell in a Cell on the June 21 episode of Raw. Woods would return on the go-home Raw for Money in the Bank and surprise Bobby Lashley with a roll-up victory over the WWE Champion. Xavier Woods would once again play a supporting role as Kofi Kingston challenged for the WWE Championship at Money in the Bank against Champion Bobby Lashley. Big E would go on to win the Money in the Bank contract that same night, but Kofi Kingston was destroyed by Lashley.

On the September 13th episode of Raw, Big E would successfully cash in his Money in the Bank contract on Bobby Lashley to become the new WWE Champion in a moment that was shared by his New Day brothers Kofi Kingston and Xavier Woods. Big E had teased it all night long and the crowd reacted like the superstar he is. Unfortunately, The New Day would once again be split in the 2021 WWE draft with Big E staying on Raw while Woods and Kingston were going to Smackdown, but not before Xavier Woods finally got his moment.

The results of the draft were not to take effect until after the October 21st Crown Jewel pay per view. The King of the Ring tournament was announced with Xavier Woods being given a first-round match against Ricochet. Xavier Woods would defeat Ricochet in the first round and Jinder Mahal in the semifinals to get a match at Crown Jewel with Finn Balor. The match was hot and had great crowd reactions the whole match. Xavier Woods would go on to defeat Balor to become the 2021 King of the Ring. It is what Woods had wanted his whole career and he finally got it.

This may not seem like a big deal but Woods and Kingston have usually been a part of the Tag Team Survivor Series matches. To put Xavier Woods on the men’s team with guys like Jeff Hardy and Drew McIntyre and against guys like Seth Rollins, Kevin Owens, Finn Balor, etc. shows the commitment WWE has in Xavier Woods by himself. Xavier Woods had been so supportive of his New Day brothers that he was rewarded with a moment of his own. I have to say it is one of my favorite things of the last five years in WWE.

I am already more interested in this King of the Ring gimmick than I have been any other King of the Ring gimmick besides maybe King Booker, which was 15 years ago. The amount of work Xavier Woods has put in to make this work, including new theme music, is top notch. Xavier Woods has already been inserted into a feud with the hottest star in the entire business, Roman Reigns. If that does not tell you the kind of confidence WWE has in King Xavier, I don’t know what does and there isn’t anybody on that roster who deserves it more. Here’s hoping it continues. All Hail King Xavier Woods!