Welcome back TJR readers! Did you spend all day Friday slamming a 73-year-old man, and missed WWE Smackdown? Perhaps you spent all day Monday praying for the people of Buffalo, NY, and missed WWE Raw.

Worry not for I have retuned with another edition of the Top Ten Wrestling Stories of the Week.

Eighteen-year-old Thea Hail went from her Senior Prom to being a WWE Superstar this week. This past Tuesday on NXT 2.0, a vignette aired of Hail stating that she will start training at the WWE Performance Center as soon as she graduates from high school. Hail will also be attending college classes while she trains. Incredibly, Hail has already wrestled four matches on NXT Level Up as well as wrestled on AEW Dark. Personally, I had similar accomplishments to Hail while still in high school, as I defeated Mike Tyson’s Punch Out without losing once!

This past Wednesday on Dynamite, Adam Cole defeated Jeff Hardy to reach the finals of the Owen Hart Foundation Tournament. Cole will now go on to either face Samoa Joe or Kyle O’Reilly in the finals at AEW Double or Nothing on May 29th. Owen Hart’s widow Dr. Martha Hart will be at Double or Nothing live to present the Owen Cup trophy to the winner. AEW also wanted Bret Hart to appear, but he already had a prior engagement bashing Goldberg that day. (TJRWrestling)

8. Two Title Matches added to NXT In Your House

Two more title matches were added to NXT’s next special event titled In Your House, which is scheduled to take place on Saturday, June 4th. In a match for the NXT Tag Team Championships, Pretty Deadly will defend the titles against The Creed Brothers. Also in the main event, Bron Breakker will once again defend the NXT Championship against Joe Gacy. Making things more challenging for Breakker, if he is disqualified in the match he will lose the title. Losing the title by disqualification would certainly be disappointing for Breakker, but at least it is better than just setting it on John Laurinaitis desk. (TJRWrestling) 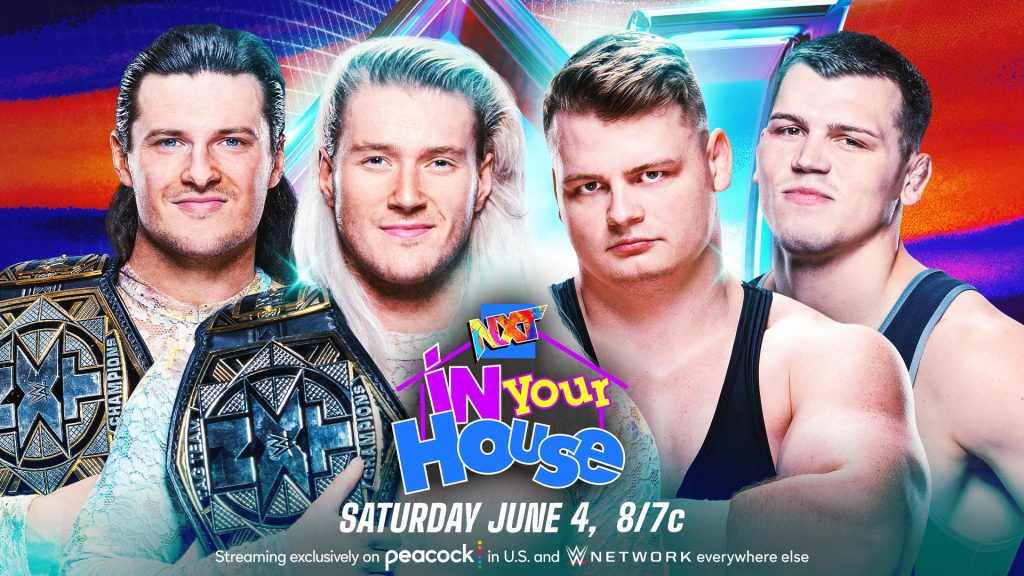 Another former WWE Champion has debuted for AEW. This past Wednesday on Dynamite, Johnny Elite (Morrison) made his debut with the company as the ‘joker’ in the Owen Hart Foundation Tournament Quarterfinals. Elite faced off against Samoa Joe in the tournament, losing to Joe in a good match. We will have to wait and see if Elite will continue wrestling for AEW, and end up changing his name to Johnny Dark.

6. Asuka to Face Bianca Belair at Hell in a Cell

After being away for nine months, it did not take long for Asuka to get back into the title picture. Just three weeks after returning to Raw, Asuka is the number one contender for the Raw Women’s Championship. This past Monday night, Asuka defeated Becky Lynch in the main event (thanks to some green mist) to earn a match against Raw Women’s Champion Bianca Belair at Hell in a Cell on Sunday, June 5th. With the win, Asuka truly showed that she is better than Lynch, as all Lynch did after nine months is have a kid.

5. Cody Rhodes and Seth “Freakin” Rollins to Face Off Inside Hell in a Cell

Seth “Freakin” Rollins is hoping that the third time truly is the charm. This past Monday on Raw, Cody Rhodes challenged Rollins to a Hell in a Cell Match at the PPV on June 5th. Rollins then appeared via video and accepted the match. This will be the third PPV in a row that Rollins and Rhodes have faced off, with Rhodes defeating Rollins at WrestleMania 38 and WrestleMania Backlash (while grabbing the tights). This week in an interview with Sports Illustrated, Cody Rhodes stated that he is “the best wrestler in the world.” Cody’s statement is obviously debatable, but without question, he clearly is the wrestler with the worst tattoo in the world. (TJRWrestling)

WWE Raw Tag Team Champions RK-Bro and Smackdown Tag Team Champions The Usos are once again scheduled to face-off. Last Friday on Smackdown, RK-Bro appeared to challenge the Usos to a tag title unification match. The Usos ended up accepting the match, with it being scheduled to take place tonight on Smackdown. The Usos and RK-Bro were originally scheduled to have the unification match at Wrestlemania Backlash before the match was changed to add Roman Reigns and Drew McIntyre. We shall all have to wait and see if WWE goes through with the unification this time, or if this is just a bigger tease than a wrestler’s OnlyFans account. (TJRWrestling)

Ric Flair is planning to prove that age really is just a number. This week it was announced that Flair will be competing in one final match on July 31st. The match will take place at the Nashville Fairgrounds on an independent card that will stream live on FITE TV. The match will be a part of Scarrcast V that is run by Flair’s son-in-law, podcast host Conrad Thompson and be produced by Jim Crockett Promotions. The match reportedly will see Flair teaming with FTR to face a mystery opponent and The Rock and Roll Express. Ricky “The Dragon” Steamboat was asked to be the final competitor in the match, but ended up turning down the request. The 73-year-old Flair has been training with AEW Superstar Jay Lethal to get ready for the match. It is unknown at this time which one of Flairs’ ex-wives will be receiving the proceeds for the match. (TJRWrestling)

I Will Prove Once Again, That To Be The Man, You’ve Got To Beat The Man!

Now We Go To School!

2. Stephanie McMahon Takes a Leave of Absence From WWE

WWE will be down a McMahon for the foreseeable future. On Thursday afternoon, WWE Chief Brand Officer Stephanie McMahon announced that she is stepping away from the WWE for the foreseeable future. McMahon stated on Twitter that she is stepping away to focus on her family, and will return in the future. No timetable was given for her return at this time. Nick Khan reportedly will be taking over McMahon’s duties, with those duties now including releasing 10 wrestlers a month for budgeting reasons. (TJRWrestling)

As of tomorrow, I am taking a leave of absence from the majority of my responsibilities at WWE. WWE is a lifelong legacy for me and I look forward to returning to the company that I love after taking this time to focus on my family.

1. Sasha Banks and Naomi Walk Out of Monday Night Raw

When Raw started on Monday the main event was announced as a Six-Pack Challenge between Asuka, Becky Lynch, Nikki A.S.H, Doudrop, Naomi and Sasha Banks, with the winner getting to face Bianca Belair at Hell in a Cell. When the main event of Raw started, however, the match was changed to just Asuka and Lynch in the match. During the Raw broadcast, Naomi and Banks walked into VP of Talent Relations John Laurinaitis office and put the WWE Women’s Tag Team Championships on his desk.

Naomi and Banks then left Raw during the middle of the show and did not return. Corey Graves stated on commentary that “Sasha Banks and Naomi summarily and unprofessionally left the arena before this match (six-pack challenge) could take place.”

WWE would then release a statement later in the evening explaining their side of the story. Reportedly Banks and Naomi were upset about how the Women’s Tag Division had been treated, and that is why they decided to walk out. Naomi’s contract is also reportedly up soon. Personally, I understand Banks and Naomi, as after John Canton has continuously denied my request to write a weekly article on The Great Khali, I have considered just qui… (TJRWrestling)

That concludes another edition of The Top Ten Wrestling Stories of the Week. Thank you for taking the time to read this each week. Although I often joke, I have recently started refereeing with NYCW and respect more than ever what wrestlers do every week. I wrote an article all about it all right here. If you like what I do, despite my jokes being almost as bad as walking out of your job, then follow me on Twitter @Fowlerwrestlin1.

Every AEW Pay-Per-View Review in Order by John Canton