Welcome back TJR readers! Did you spend all day Friday waiting for a phone call to be in the Rumble, and missed WWE Smackdown? Perhaps you spent all day Monday celebrating a LA Rams victory, and missed Raw.

The longest-reigning NXT UK Women’s Champion of all time is looking to once again become a champion. This past Tuesday on NXT, Kay Lee Ray challenged Mandy Rose to a match for the NXT Women’s Championship. Rose proceeded to turn down the challenge, stating that Ray did not deserve a title opportunity. Rose then attempted to leave in her rental car with her Toxic Attraction partners Jacy Jayne and Gigi Dolin. Before Rose could get in the car however, Ray revealed herself to be the driver. Ray then drove away with Jayne and Dolin while Rose looked on in dismay. Ray did not stop there, as she then returned and chased Rose throughout the arena later in the night. Rose and Ray eventually ended up in catering, with Ray dumping spaghetti on Rose’s head before smashing her with a cake. The two then made their way back into the arena with Ray once again challenging Rose to a match, Rose then accepted the match for next Tuesday on NXT. Normally a big title match like this would be saved for the NXT Vengeance Day special on February 15th, but Mandy Rose will be way too tired from turning down all of John Canton’s Valentine’s Day requests to have a match on that day. (TJRWrestling)

9. WWE Hall of Fame Ceremony to Take Place After Smackdown

WWE fans who plan to attend the live Smackdown taping on Friday, March 31st in the American Airlines Center in Dallas, Texas are in for a very long night. This week it was reported that WWE’s annual Hall of Fame Ceremony is scheduled to also take place on that Friday night from the American Airlines Center, starting just 30 minutes after Smackdown goes off the air. Fans who buy tickets for Smackdown are expected to be able to stay and watch the ceremony for free. We shall have to see how many wrestling fans stay for the ceremony, or if they will just do what they normally do and go back to their rooms and complain on the internet instead. (PWInsider)

It was a tumultuous 24 hours on Wednesday for Brian Kendrick. It was reported on Tuesday evening that Kendrick had been granted his release from the WWE recently. The following Wednesday morning, AEW announced on Twitter that Kendrick would be making his debut on Dynamite that evening against Jon Moxley. A few hours after making the announcement however, past offensive comments (on video) by Kendrick about the Holocaust, 9/11 and the Sandy Hook shooting resurfaced. These comments resulted in Tony Khan pulling Kendrick from the match and the show entirely. Kendrick has since apologized for his statements, stating that they are not his true beliefs. Losing two jobs in less than 24 hours is impressive, as he is the first wrestler to ever be DoubleKhanned.

I apologize for all the hurt and embarassment I have caused with my words. These are not my beliefs and never were beliefs of mine, and I crossed the line.

Becky Lynch is going to have to defeat a Hall of Famer if she wants to go into WrestleMania 38 as the Raw Women’s Champion. This past Monday on Raw, WWE Hall of Famer Lita confronted Lynch. Lita then challenged Lynch to a title match at WWE Elimination Chamber in Saudi Arabia on February 19th, with Lynch accepting the challenge. This will be the first singles match that Lita has competed in since 2006, with that match just airing for the first time in Saudi Arabia last week. (TJRWrestling)

The participants to challenge Bobby Lashley for the WWE Title inside the Elimination Chamber on February 19th in Saudi Arabia, were finalized on Raw this week. This past Monday’s Raw saw three qualifying matches, with Austin Theory defeating Kevin Owens, Riddle defeat Otis and AJ Styles defeating Rey Mysterio. Brock Lesnar and Seth Rollins also were announced for the match, with neither man having to qualify. This is the first time that someone had to win to enter an Elimination Chamber in Saudi Arabia, as usually it is the losers who enter it. 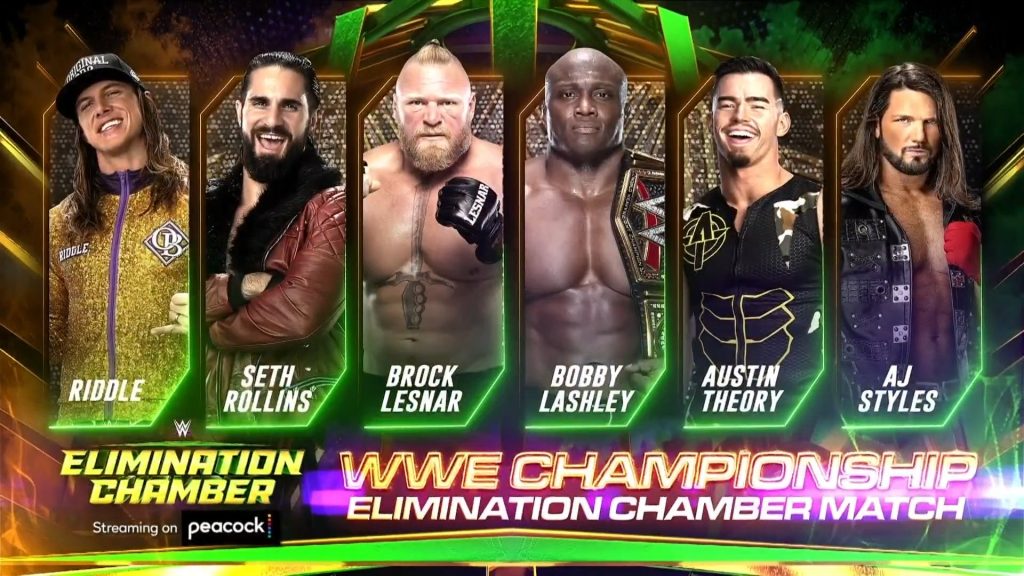 CM Punk lost his first wrestling match since 2014 this week. Punk faced off against MJF in the main event of Dynamite this week, in Punk’s hometown of Chicago, Illinois. After an excellent 40 minutes of wrestling, Wardlow suddenly made his way down to ringside. Wardlow’s appearance was able to distract Punk and the referee long enough for MJF to punch Punk with the Dynamite Diamond ring, to pick up the win. MJF then sat cross-legged in the ring and smiled to end the show. Losing his first match in AEW in his hometown is obviously a bad night, with the only thing that could have possibly made it worse being if the match was against Ryback instead. (TJRWrestling)

Just when you thought a WWE release could not be shocking anymore, Vince McMahon said “hold my beer.” This past Saturday at the Royal Rumble, Shane McMahon made a surprise return in the Men’s Royal Rumble Match. Shane entered at number 28, and lasted to the final three competitors before being eliminated by Brock Lesnar. After the match, it was reported that Shane also worked as the head producer of the Rumble Match, and got a lot of “heat” for booking himself strong in the match. Shane’s Rumble appearance was reportedly supposed to lead to him having a role at The Elimination Chamber and WrestleMania 38. These plans reportedly changed this week however, with Shane being “quietly let go” by WWE. In related news, Vince McMahon is reportedly exploring what it would take to officially adopt WWE President Nick Khan. (TJRWrestling)

Ronda Rousey wasted no time getting back into the main event picture in the WWE. This past Saturday at the Royal Rumble, Rousey entered the Women’s Royal Rumble at number 28. Rousey then went on to eliminate four women including Smackdown Women’s Champion Charlotte Flair, to win the match. Rousey is scheduled to appear on Smackdown tonight, to decide if she will be facing Flair or Raw Women’s Champion Becky Lynch at WrestleMania 38. This past Saturday was the first time Rousey had competed in a WWE ring since competing in the main event of WrestleMania 35 against Flair and Lynch. Rousey lost the Raw Women’s Title to Lynch in that match. Both Rousey and Lynch have become mothers since then, while Charlotte lost her fourth step-mother.

This past Saturday’s Royal Rumble was a very eventful day for Brock Lesnar. Lesnar started the evening by facing Bobby Lashley for Lesnar’s WWE Championship. After losing the title to Lashley (more on that later), Lesnar then entered the Men’s Royal Rumble Match at number 30. Lesnar would then go on eliminate five competitors including Drew McIntyre, to win the match. Lesnar then appeared this past Monday on Raw and confronted Lashley. Lesnar then announced that he would be one of the five men to challenge Lashley inside the Elimination Chamber in Saudi Arabia on February 19th. Lesnar then also announced that he would be challenging Roman Reigns for the Universal Championship at WrestleMania 38. After making all of these announcements, it is expected that WWE will release 30 more superstars to pay Lesnar for these matches.

Bobby Lashley is once again the WWE Champion. This past Saturday at the Royal Rumble, Lashley faced off against Brock Lesnar for the title. The finish of the match saw Roman Reigns interfere and attack Lesnar, when the referee was down. Paul Heyman then proceeded to turn on Lesnar and hand Reigns the WWE Championship. Reigns then hit Lesnar with the title, allowing Lashley to get the win. Lashley will not have an easy first title defense, as he will now have to face five men including Lesnar inside the Elimination Chamber in Saudi Arabia. Lashley actually captured the ECW Championship inside of the Elimination Chamber at December to Dismember in 2006. Luckily for both WWE and Lashley, that match will not air for a few more months in Saudi Arabia. (TJRWrestling) 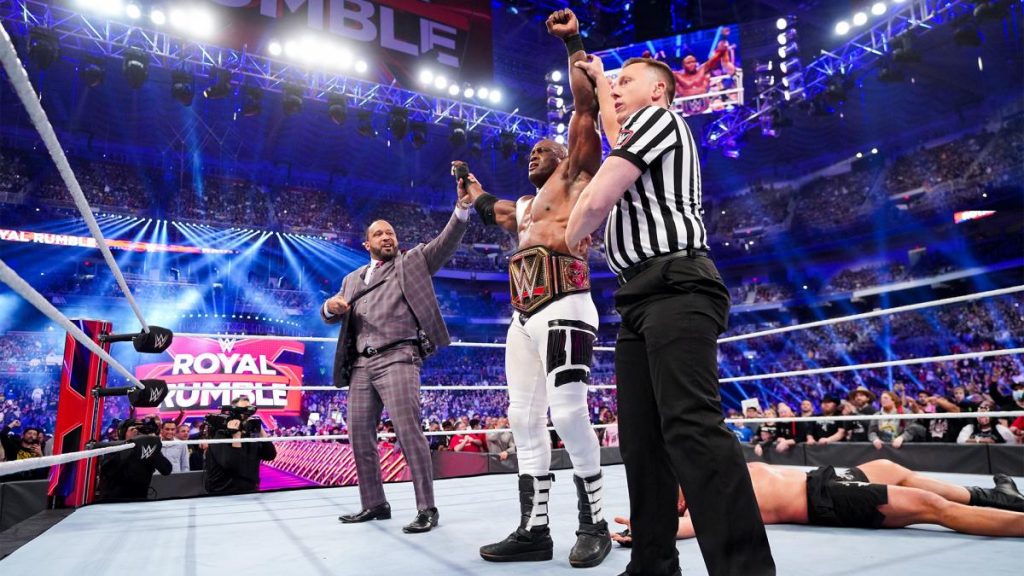 That will conclude another edition of The Top Ten Wrestling Stories of the Week. Thank you for taking the time to read this each week. Although I often joke, I have recently started refereeing with NYCW and respect more than ever what wrestlers do every week. I wrote an article all about it all right here. If you like what I do, despite my jokes being almost bad as your own father firing you, then follow me on Twitter @Fowlerwrestlin1.