Welcome back TJR readers, did you turn off your TV Friday because you are already sick of political ads and miss Smackdown? Perhaps you are not a multimillionaire and had to work Thursday afternoon and missed Super Showdown. Worry not, as I have returned with another edition of The Top Ten Wrestling Stories of the Week to catch you all up.

AEW got a little bit bigger this week, as they signed former TNA, WWE and NJPW superstar Lance Archer. The 6’8” Archer is set to debut for AEW next week on AEW: Dynamite. This signing will help with AEW’s size problem, as they have often been criticized for being to0 small. If you also have a size problem then you should try Bluechew, and make sure to use the code “Bookers” and get your first order for FREE! (TJRWrestling)

8. Bella Twins officially announced for the WWE Hall of Fame

After being heavily rumored and reported on this very site, The Bella Twins were officially announced for the WWE 2020 Hall of Fame class. The announcement was made on Smackdown during Alexa Bliss’s talk show “A Moment of Bliss.” The Bella Twins, who are both pregnant, were joined on stage by Daniel Bryan and Daniel’s and Brie’s young daughter Birdie. Nikki Bella’s fiancé did not appear in the segment, perhaps due to the fear of having his Attitude Adjusted by John Cena if he did. (TJRWrestling)

For weeks on RAW Seth Rollins has been referring to himself as “The Monday Night Messiah.” Murphy and AOP have both decided to be disciples of Rollins, joining his cause. This week another man decided to become one of Rollins disciples, but this time it was not a wrestler but instead a WWE official. Referee Jake Clemons (who works for indy promotions like Evolve and AIW) was officiating the main event match between Randy Orton and Kevin Owens, when Orton gave Owens a DDT and went for a cover. Clemons counted a fast three count, screwing over Owens, who is currently in a feud with Rollins. After the match, Owens attacked Clemons, revealing that he was wearing a Rollins shirt under his referee shirt. Owens then proceeded to powerbomb Clemons through a table, showing that Owens will Crucify anyone who Crosses him. (TJRWrestling)

Charlotte Flair made her anticipated return to a NXT ring this week. In the main event of the night Flair made her return after a four year absence, defeating Bianca Belair. After the match Flair continued to attack Belair’s ankle with a steel chair and then the Figure Four, before Rhea Ripley made the save. Flair will now go onto Wrestlemania were she will face off with Ripley for the NXT Women’s Title. Flair has had an incredible amount of accomplishments since leaving NXT four years ago including winning ten world championships and the Royal Rumble. Charlotte did not, however, usher in the Women’s Revolution because as WWE will surely tell you multiple times over the next couple months, that was clearly the Bella Twins. (TJRWrestling)

Somebody must have thrown Samoa Joe through a barbershop window because his series of bad luck has continued this week. After receiving a concussion a few weeks ago while filming a television commercial, it was announced this week that Joe has been suspended for thirty days for violating the WWE Wellness Policy. The suspension will unfortunately mean that Joe will miss most of the road to Wrestlemania, with him being eligible to return less than two weeks before the event. It is unclear what substance Joe was suspended for, as the large number of bowls of Lucky Charms that he has digested to try to change his fortune should not have been an issue. (TJRWrestling)

It only took John Morrison a little over a month since returning to WWE to, once again, capture gold. Morrison and his tag team partner The Miz defeated The New Day at Super Showdown to win the Smackdown Tag Team Championships. Morrison and Miz will now begin defending those titles, were as The New Day will most likely continue to smile and throw there now very stale pancakes like nothing happened. (TJRWrestling) 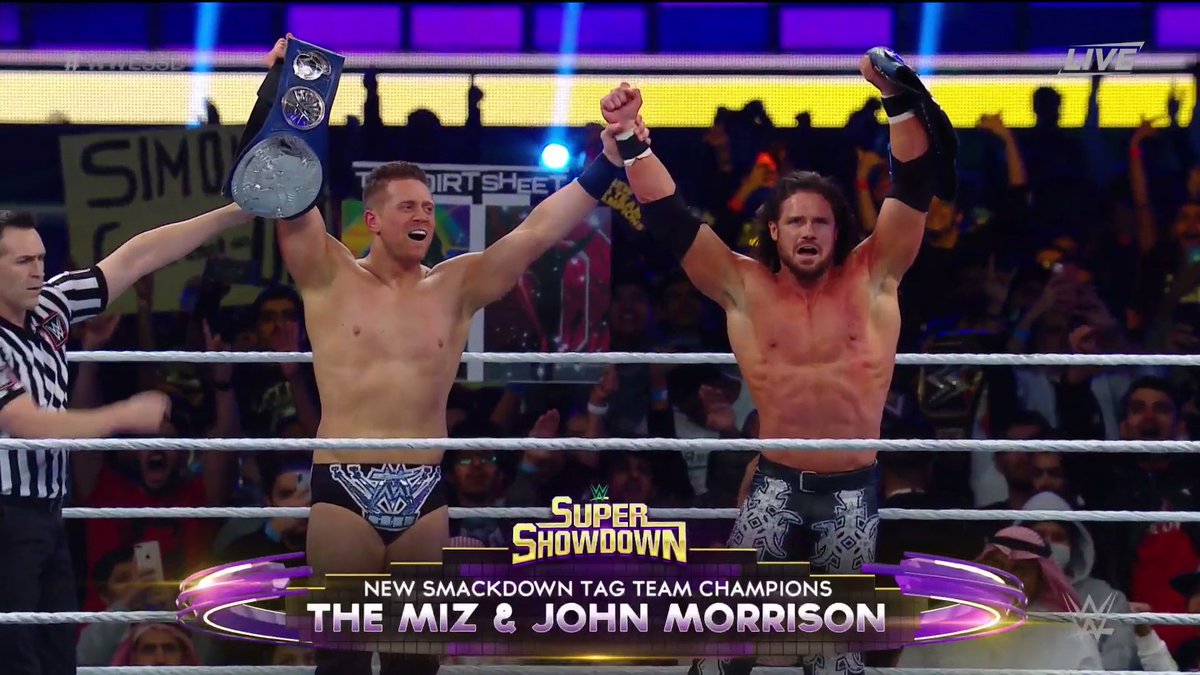 3. The Undertaker Wins the Tuwaiq Trophy

After The OC attacked Rey Mysterio preventing him from entering the Tuwaiq Trophy Gauntlet Match at Super Showdown this week, it looked like AJ Styles was going to be crowned the winner. This was however until The Undertaker made a surprise appearance, taking out the OC and entering the match. Taker defeated Styles with a chokeslam in about ten seconds to win the Tuwaiq Trophy. Takers appearance not only helped build towards the heavily rumored Wrestlemania match against Styles, but also helped WWE meet the age quota needed to put on a Saudi Show. (TJRWrestling) 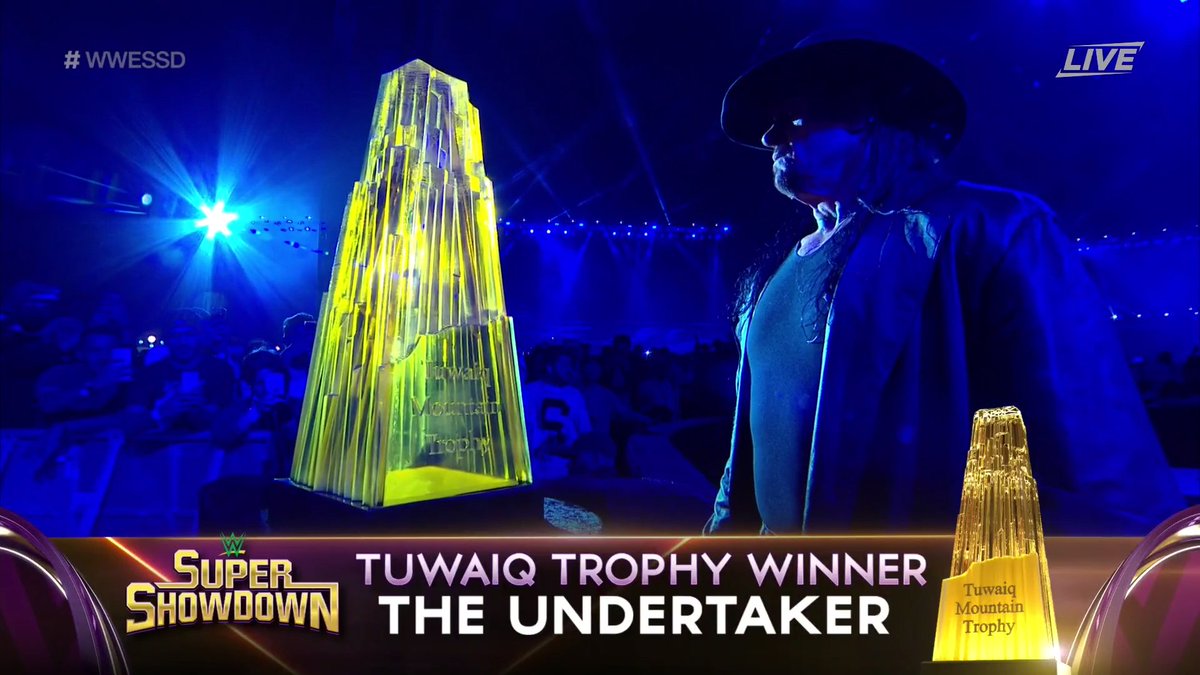 AEW is ready to leap into action this Saturday night, as they put on their next PPV AEW: Revolution. AEW has stacked the card with many big-ticket matches including the Elite colliding for the tag team championships when the Young Bucks go against AEW Tag Team Champions Adam Page and Kenny Omega. Also, Cody Rhodes will finally get his hands on MJF in a grudge match that goes all the way back to November. The main event of the show will feature AEW Heavyweight Champion Chris Jericho defend his title against Jon Moxley. Moxley and Jericho actually had a series of matches in WWE back in 2016, ending with Moxley defeating Jericho in the first and only Asylum match. Hopefully, Revolution will be a success for AEW, and they won’t have to seek Asylum from the wrestling universe. (TJRWrestling)

The answer to, ‘What will it to take to stop the “The Fiend” Bray Wyatt?’ was answered in Saudi Arabia at Super Showdown this week. After surviving numerous curb stomps, a beating with a leather strap, a sledgehammer and much more in the past, it seemed that nothing could stop Wyatt. This all changed however when the 53- year-old Goldberg defeated Wyatt for the Universal Championship at Super Showdown in about three minutes with a poorly executed jackhammer. Goldberg will now likely go on to face Roman Reigns at Wrestlemania where Wyatt is reportedly going to be facing John Cena in a rematch from Wrestlemania 30. After watching Goldberg’s match against Wyatt, he may want to consider BlueChew if he wants to try to get Reigns up for the jackhammer at Mania. (TJRWrestling)

That will conclude another edition of The Top Ten Wrestling Stories of the Week. As always, if you like what I do, please follow me on Facebook and Twitter @BackseatBookers and listen to my podcast The BackseatBookers(please be aware that it is explicit as I use more swear words than Bernie Sanders has had birthdays.)