Welcome back TJR readers! Did you spend all day Friday trying to figure out how Goldberg could possibly qualify for another title match, and missed WWE Smackdown? Perhaps you spent all day Monday looking up the rules for curling and missed Raw.

10. The Inner Circle Breaking up?

AEW could be down one faction after this Wednesday. This past Wednesday on Dynamite, the Inner Circle had a “team meeting” in the ring. Chris Jericho, Sammy Guevara and Jake Hagar entered the arena together first, with then Santana and Ortiz entering separately to their own entrance music. Jericho and Santana then proceeded to get into a verbal confrontation, with Santana claiming that Jericho only cared about himself. Jericho then stated that maybe he hired the wrong members of LAX, and asked for Hernandez & Homicide’s number. This bickering then led to Guevara stating that he doesn’t need this, and to resolve their issues or he is done with the Inner Circle. Ortiz and Santana then challenged Jericho and Hager to a tag match next week, with Jericho accepting. If the Inner Circle does end up disbanding, Jericho and Hager could consider starting a new faction with some of the other 32 former WWE superstars that are now on the roster.

Bron Breakker’s next challenger may be a former WWE World Champion. This past Tuesday on NXT, Bron Breakker and Santos Escobar were doing a promo in the ring to promote their match at NXT Vengeance Day on February 15th. Suddenly Dolph Ziggler’s music began playing in the arena, as Ziggler suddenly came down to the ring. Ziggler and Breakker then had words, with Breakker telling Ziggler he would deal with him once he’s done with Escobar. More music then started playing in the arena, with Tommaso Ciampa then coming down to the ring. Ciampa proceeded to remind Breakker that he was next in line for a title match. Ziggler and Ciampa then proceeded to get in a confrontation, with the two ending up brawling at ringside. Ziggler has captured 14 championships in the WWE including two World Championships but has never held an NXT Title. We will have to wait and see if Ziggler will be successful in NXT, or if he will be back in line at Raw catering by the end of the month.

NXT’s next television special titled NXT Vengeance Day is scheduled to take place this Tuesday. Five matches have been scheduled for the event including The Creed Brothers facing MSK in the finals of the Dusty Rhodes Tag Team Classic. Cameron Grimes will challenge Carmelo Hayes for the NXT North American Championship. Toxic Attraction will defend the NXT Women’s Tag Team Championships against Indi Hartwell and Persia Pirotta. Pete Dunne will face Tony D’Angelo in a Weaponized Cage Match. And finally, Bron Breakker will defend the NXT Championship against Santos Escobar. As previously mentioned all of this is scheduled to take place Tuesday evening, but Vengeance Day could end up being a week-long event for John Canton if the Bengals win on Sunday. (TJRWrestling) 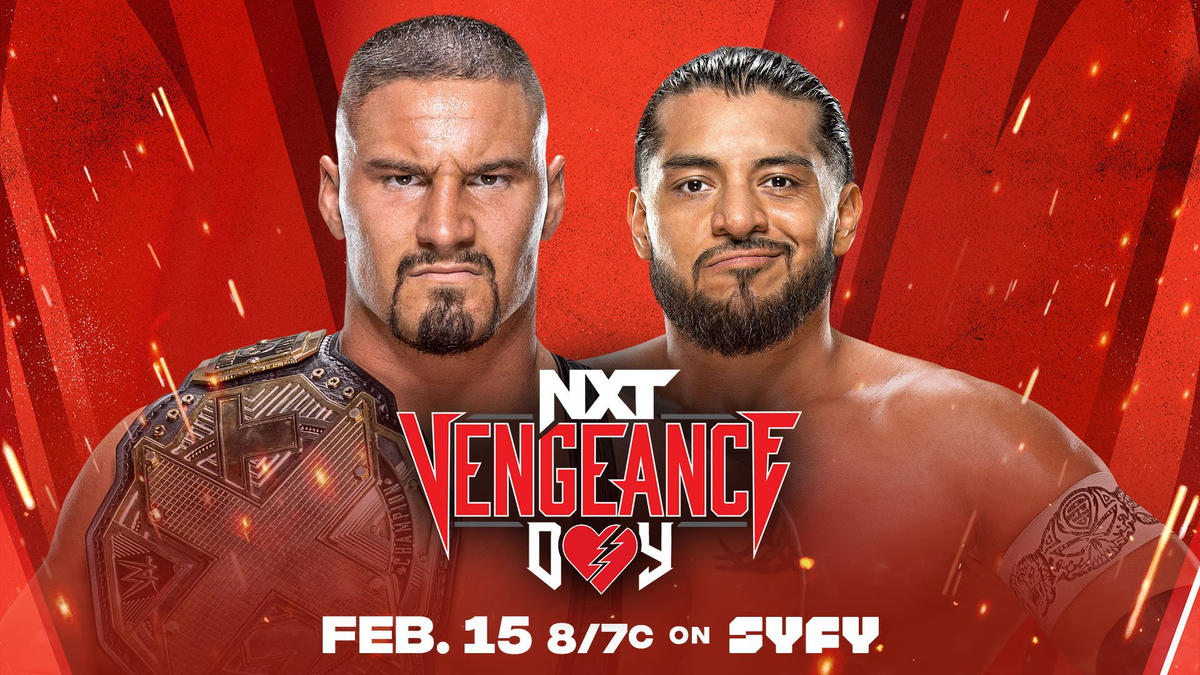 The men will not be the only ones stepping inside the Elimination Chamber on February 19th in Saudi Arabia. This past Monday WWE announced that their will be a Women’s Elimination Chamber Match at the event as well, with the winner challenging either Lita or Becky Lynch for the Raw Women’s Championship at WrestleMania 38. So far Rhea Ripley, Bianca Belair, Liv Morgan, Doudrop, and Nikki A.S.H have been announced for the match, with one more competitor yet to be announced. It is unknown who will be the final participant in a match at this time, but I can guarantee that it won’t be the Saudi Prince’s vote of Chyna. 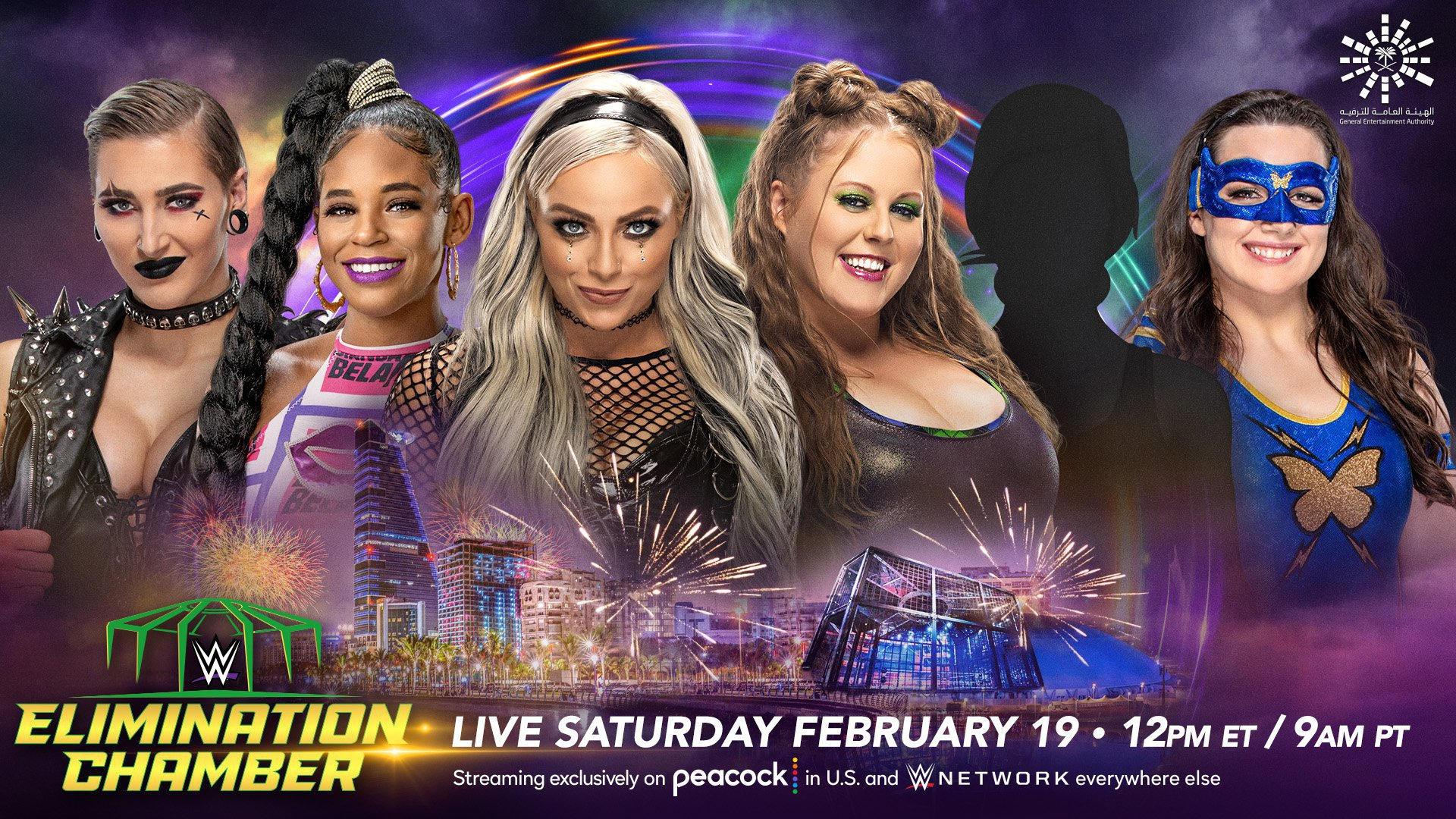 6. WrestleMania 38 Main Event Rumored to be Title for Title

The main event match at WrestleMania 38 might be having even higher stakes. This week it was reported that the current plans are for both the Universal and WWE Championship’s to be on the line in the match. For this to occur, Lesnar would have to capture the WWE Championship inside the Elimination Chamber on February 19th. Lesnar then would go on to challenge either Roman Reigns or Goldberg at WrestleMania 38, with both titles being on the line. Coincidentally WWE is also considering an “at least I still have a job match” between Big E, Drew McIntyre, Seth Rollins and Kevin Owens. (TJRWrestling)

The forbidden door swung open once again this week. This past Wednesday on Dynamite during a backstage segment, The Young Bucks and Adam Cole attack Roppongi Vice (Trent Beretta, Rocky Romero). Suddenly The Bucks and Cole stopped there attack, as former IWGP Heavyweight Champion Jay White appeared. White then proceeded to throw Beretta into a production truck, before nodding to The Young Bucks and Cole. White then walked away to end the segment. Interestingly Tony Khan admitted on Twitter that he only booked White to appear on the show this past Sunday, and only because he had mentioned the Forbidden Door by accident when promoting the surprise debut of Keith Lee. Since Lee was not currently under contract with another company, he could not be considered to be coming through the Forbidden Door. White on the other hand is under contract with NJPW, and therefore was able to help Khan make good on his promise. Also interestingly is that White appearing is officially the first good thing to ever come out of Twitter. (TJRWrestling)

Saudi Arabia’s favorite wrestler is scheduled to make his triumphant return at WWE Elimination Chamber on February 19th. This past Friday’s Smackdown opened with Roman Reigns giving a promo in the ring. Reigns was then suddenly interrupted by a returning Goldberg, who told Reigns: “You. Me. Elimination Chamber. For the Universal Championship. You’re next!” Goldberg and Reigns were scheduled to wrestle at WrestleMania 36 in 2020, before Reigns pulled out of the match due to concerns over Covid-19 since he had newborn twins at home and a history with leukemia. With the booking of Goldberg, WWE has officially met the age criteria for this Saudi show. (TJRWrestling)

WWE fans will have to wait a little longer to see the battle of the moms. This past Friday on Smackdown, WWE Women’s Smackdown Champion Charlotte Flair was in the ring with WWE official Sonya Deville. Deville proceeded to let Flair know that Ronda Rousey was expected to choose Raw Women’s Champion Becky Lynch as her opponent at WrestleMania 38, and not Flair. Flair then told Deville that she was not surprised that Rousey would choose Lynch, because “mom vs. mom is the easier route”. This brought out Rousey , who then proceeded to tell Flair: “I’ll see you at WrestleMania, bitch.”

Rousey and Flair then got into a stare-down, with Flair telling Rousey that “This title is my baby…and she’s prettier than yours.” Rousey then took off her jacket, causing Deville to get in her face and tell her that she was in charge and told Rousey what to do. Rousey then attacked Deville and put her in an armbar to end the show. WWE fans will now have to wait to see the “battle of the moms” (Rousey vs. Lynch) to at least the next time Roman Reigns throws a shirt into the crowd. (TJRWrestling)

Keith Lee had AEW fans basking in his glory this past Wednesday. Lee debuted as the “huge signing” that Tony Khan had been teasing all week. Lee debuted by wrestling Isiah Kassidy in a qualifying match to join the AEW “Face of the Revolution” Ladder Match at the Revolution pay-per-view on March 6. Lee was victorious in the match, and will now have a chance in the ladder match to become the number one contender for the TNT Championship. Lee had a very eventful week, as he also got married to fellow wrestler Mia Yim last weekend. Lee and Yim are very excited about all the extra time they will have together, now that Lee is only wrestling on television two or three times a year. (TJRWrestling)

Don’t miss another minute of the action! #AEWDynamite is LIVE on @TBSNetwork right now! pic.twitter.com/Bl2xDiAT2Q

The number one story this week actually has nothing to do with wrestling. If you are a long-time fan of TJRWrestling, then you are well aware of our editor/writer/creator John Canton’s love for the LA Rams for over 35 years. His passion and dedication to the team are only trumped by his dedication to this site. So if you are like me and no longer have a dog in the fight, consider rooting for the Rams this Sunday. I personally believe that anyone who has had to watch and review that many episodes of Raw deserves a win.

That will conclude another edition of The Top Ten Wrestling Stories of the Week. Thank you for taking the time to read this each week. Although I often joke, I have recently started refereeing with NYCW and respect more than ever what wrestlers do every week. I wrote an article all about it all right here. If you like what I do, despite my jokes being almost bad as John Canton’s mood if the Rams lose on Sunday, then follow me on Twitter @Fowlerwrestlin1.