Welcome back, TJR readers! Did you spend all day Friday trying to scrounge up a few billion dollars to buy a wrestling company, and missed WWE Smackdown? Perhaps you were going back to Buffalo, New York after a miraculous recovery, and missed Raw.

A former WWE World Heavyweight Champion appeared on NXT this week. This past Tuesday on NXT, it was scheduled to be Sanga and Veer Mahaan facing The Creed Brothers. When the match was scheduled to occur however, Mahaan was nowhere to be found. Sanga then stated he would face The Creed Brothers alone, before Jinder Mahal made a surprise appearance to attack The Creed Brothers from behind. Mahal was not done there, however, as he later defeated Julius Creed in a one-on-one match. Mahal had not been seen on WWE television since losing to Braun Strowman on the November 11th episode of Smackdown. Hopefully returning to NXT can now hinder some of Jinder’s time in catering. (TJRWrestling)

Bobby Lashley may have some help from his old Hurt Business friends soon. This past Monday on Raw, MVP approached Lashley in a backstage segment. MVP then revealed that he was the one who got Lashley reinstated after he was suspended by Adam Pearce a few weeks back. MVP then continued by stating that he wants to “mend fences” after successfully reuniting the tag team of Shelton Benjamin and Cedric Alexander, before telling Lashley to give him a call if he wants to do ‘business’. The Hurt Business was a very successful faction during the pandemic era of WWE before breaking up in January of last year. Since then, MVP chose to align himself with Omos, which ended up Hurting Business in a whole other way. (TJRWrestling)

There appears to be a new heel faction on Smackdown. This past Friday on Smackdown, Ricochet faced Top Dolla of Hit Row in a Royal Rumble qualifying match. After Ricochet quickly defeated Top Dolla, an incensed Top Dolla along with fellow Hit Row members Ashante ‘Thee” Adonis and B-Fab brutally attacked Ricochet. The attack did not last long however, as Braun Strowman came down to save Ricochet. It is not surprising that WWE chose to turn Hit Row heel, as their face run took a hard dive a few weeks ago. (TJRWrestling)

Uncle Howdy appeared on Raw this week, with Bray Wyatt being nowhere to be seen. This past Monday, Alexa Bliss gave an in-ring promo where she fully embraced her dark persona. Bliss then stated that she was the one in charge, before claiming that she had the whole world in her hands. Suddenly a creepy video appeared on the screen, with Uncle Howdy asking Bliss: “Do you feel in charge?” Howdy then came out on the stage, while Bliss stood watching while standing on the commentary table. We will have to wait and see if Bliss turning to her dark side means that she once again carries a doll around and suddenly act like she graduated from Hogwarts. (TJRWrestling)

.@AlexaBliss_WWE feels no remorse for her actions but is confronted by Uncle Howdy, who questions whether she is in control.#WWERawpic.twitter.com/QpFdgHMlkh

This past Monday on Raw, a Gauntlet match was held to determine the new number-one contenders for the WWE Raw Tag Team Championships. The match saw The Judgment Day duo of Finn Bálor and Damian Priest overcome The OC pair of Gallows and Anderson, Shelton Benjamin and Cedric Alexander, and Alpha Academy before Bálor had to withdraw due to an apparent injury. Fellow Judgment Day member Dominik Mysterio then replaced Bálor in the final match against the Street Profits, with Judgement Day picking up the win. Judgment Day will now challenge The Usos for just their Raw Tag Team Titles. The Usos have been the Undisputed WWE Tag Team Champions since last May, with this being the first time since then they’ve only defended one set of their belts. Rumors that the Raw and Smackdown tag titles will now have pictures of Mickey and Donald on them have not been confirmed at this time. (TJRWrestling) 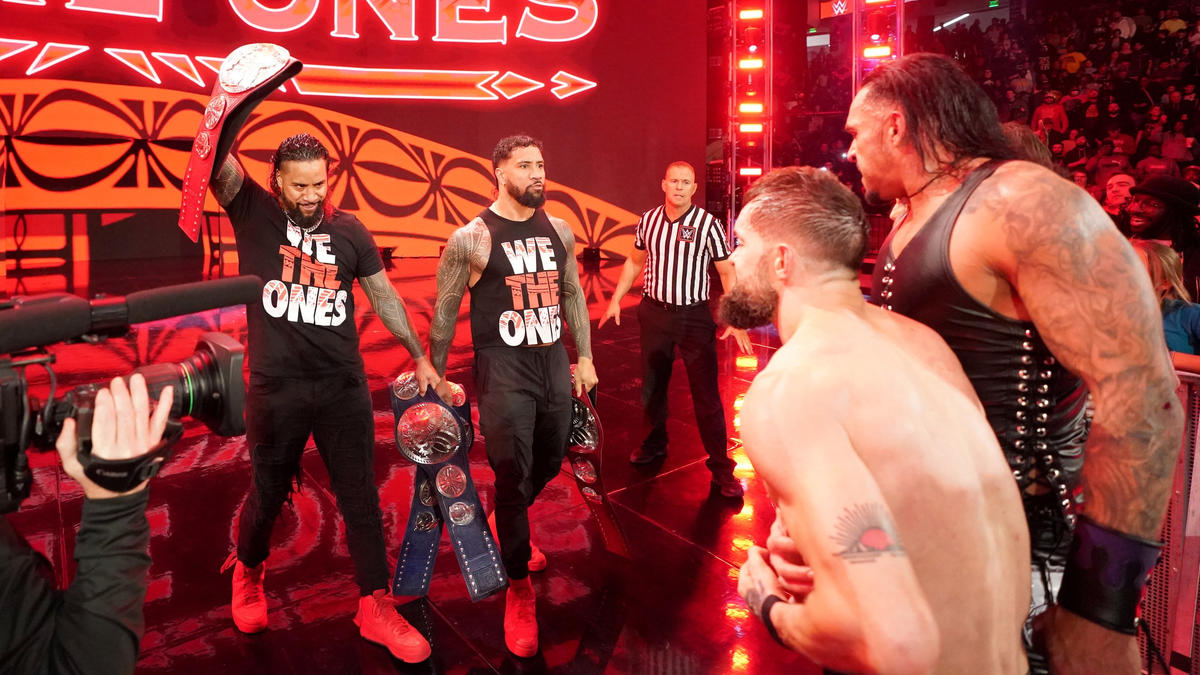 For the first time in over six months, AEW featured Adam Cole…Baby! This past Wednesday on Dynamite, Adam Cole appeared in front of the crowd to give an in-ring promo. Cole then announced that he was officially back with AEW, before promising that he was going to someday capture the AEW World Championship. Cole suffered a severe concussion at AEW x NJPW Forbidden Door way back in June, with rumors circulating that he may never wrestle again. Luckily for Cole, he only has to be a professional wrestler and not try to quarterback the Miami Dolphins. (TJRWrestling)

4. Kevin Owens to Face Roman Reigns at the Royal Rumble

Kevin Owens will officially be the next person to try to end Roman Reigns’ historic championship run. This past Friday on Smackdown, it was announced that Owens will challenge Reigns for the WWE Undisputed Universal Championship at the Royal Rumble on January 28th. Interestingly this is the third time that Reigns and Owens have faced each other at the Royal Rumble, with them facing each other in 2017 and 2021 as well. Perhaps even more interestingly, Owens won the 2017 matchup while Reigns won in 2021. We shall have to wait and see who wins the rubber match, and if the WWE decides to make The Jumping Bomb Angels vs. Glamour Girls match a trilogy as well. (TJRWrestling) 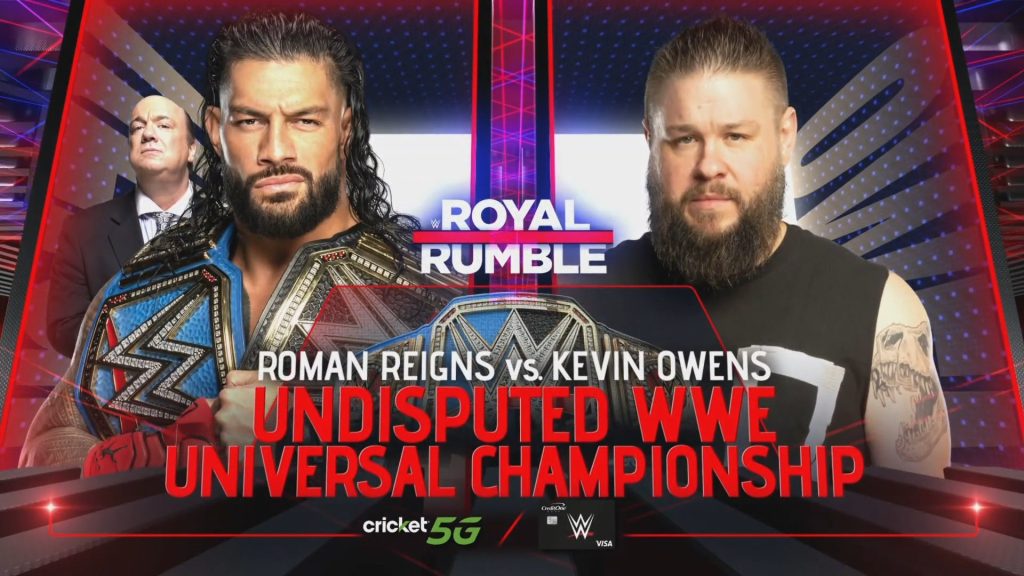 It only took multiple months and seven matches, but the Elite team of Kenny Omega and The Young Bucks have recaptured the titles they never lost. This past Wednesday on Dynamite, Omega and The Bucks defeated Death Triangle in a ladder match to win the best of seven series and capture the AEW Trios Titles. The Elite were the inaugural AEW Trios Championships, capturing the titles at AEW All Out. Omega and The Young Bucks did not get to hold the titles for very long however, as they were stripped of them following the infamous backstage brawl that occurred after the event. After finally recapturing the titles, Omega and The Bucks immediately left the arena and refused to open any locker room doors. (TJRWrestling)

Ironically the biggest story this week was one that ended up being false. This past Tuesday evening, it was reported by several sources that WWE had been sold to Saudi Arabia’s Public Investment Fund. This obviously caused an uproar with the internet wrestling community, with many people being understandably upset with the news. Fortunately, these stories were later proven to be false, with no deal being finalized at this time. Further proving that no deal has in fact been made, WWE CEO Nick Khan actually met with Disney CEO Bob Iger this week as well. Perhaps even more interesting it was also reported this week that AEW is interested in merging with WWE. On a related note, it has also been proven false that John Canton will be using some of his sweet, sweet TJRWrestling money to buy the WWE. (TJRWrestling)

There will be the day when the sale is confirmed by WWE itself and then we can dive into what it means. Until then, there are going to be a lot of reports about it and people guessing. My suggestion is don't get worked up about anything until it's official.

1. Stephanie McMahon Resigns as Chairwoman & Co-CEO of the WWE

Less than a week after Vince McMahon shockingly returned as Executive Chairman of WWE’s Board, his own daughter has left the company. This past Tuesday, Stephanie McMahon announced her resignation as Chairwoman & Co-CEO of WWE with the following statement on Twitter.

Then. Now. Forever. Together. pic.twitter.com/8dqr5reIiv

WWE hired JP Morgan to advise on a potential sale this week, with the WWE Stock skyrocketing due to the chance of sale looming. Interestingly, WWE may have an opportunity for its second female CEO when Disney buys the company and puts Minnie Mouse in charge. (TJRWrestling)

That concludes another edition of The Top Ten Wrestling Stories of the Week. Although I often joke, I have recently started refereeing with NYCW and FCWA, and respect more than ever what wrestlers do every week. I wrote an article all about it all right here. If you like what I do, despite my jokes being almost as bad as not checking your sources before posting a major story, then follow me on Twitter @Fowlerwrestlin1.and listen to my Podcast The Smark and the Noob. Thank you to all of those who read this every week.