Welcome back, TJR readers! Did you spend all day Friday trying to decide what you are going to do in your retirement, and missed WWE Smackdown? Perhaps you spent all day Monday trying to figure out how to handle your wife being your boss, and missed Raw.

Alundra Blayze decided to take titles out of a trash can this week. Blayze appeared on NXT 2.0 this past Tuesday, and pulled the NXT Women’s Tag Team Championship out of a trash can. Former NXT Women’s Champion Cora Jade had thrown away the title the previous week on NXT 2.0, after shockingly attacking her tag team partner Roxanne Perez. Blayze then announced that a Fatal 4-Way elimination match will be held to crown new champions on the August 2nd episode of NXT 2.0. Tatum Paxley & Ivy Nile, Toxic Attraction, Kayden Carter & Katana Chance and Valentina Feroz & Yulisa Leon will be the competitors in the match. Unfortunately, there is no indication that WWE will bring in Nailz to break into John Laurinaitis’ office to bring back the WWE Women’s Tag Team Championships. (TJRWrestling)

Hook followed in his father’s footsteps this week. This week on Dynamite, FTW Champion Ricky Starks defeated Danhausen. After the bout, Starks issued another open challenge for his FTW Championship. Surprisingly, Taz’s son Hook came out and silently accepted the challenge. Hook then made quick work of Starks to capture the title his father introduced almost 25 years ago. As for Starks, things got worse after losing the title as he was brutally attacked by his partner Powerhouse Hobbs. Starks should be able to bounce back from these setbacks fairly quickly however, as he can just challenge for one of the 13 other title belts that AEW/ROH currently has.

If you thought seven championships were not enough for AEW, then boy do I have some good news for you. This week on Dynamite it was announced that a tournament will be held to crown the first-ever AEW Trios Champions. No teams for the tournament have been announced at this point, but the new champions will be crowned at All Out on September 4th. This will make the eighth championships for AEW, not including the six titles that ROH has as well. This means that to even have one title match on television for all 14 titles, they would have to have a title match less than once an hour. Luckily for AEW, they have two YouTube shows that no one watches to have major title matches as well.

Here is a better look at the #AEW TRIOS CHAMPIONSHIP belts, designed & crafted by #RedLeatherBelts.
The first champions will be crowed at #AEWAllOut, Sunday, September 4 LIVE on PPV from the @NOW_Arena, get your tickets now @ https://t.co/UN1cNj1kQqpic.twitter.com/AGuQ7VokPN

Finally, Claudio Castagnoli is a World Champion. This past Saturday at ROH Death Before Dishonor, Castagnoli defeated Jonathan Gresham to capture the ROH World Championship. This is Castagnoli’s first major world championship in his over 20-year career. As for Gresham, he reportedly quit ROH/AEW immediately after losing the title out of frustration with how he has been booked. We will have to see if Castagnoli can bring ROH back to prominence, as lately, things have been pretty Dark for the company. (TJRWrestling)

BREAKING NEWS: @LFFStadium in Philadelphia will host @WrestleMania 40, on Saturday, April 6 and Sunday, April 7, 2024, as first reported by @PhillyInquirer and @SBJ.https://t.co/UNpWPeh8aFpic.twitter.com/oHrX8bk9uz

Bryan Danielson made his much-anticipated return to AEW this past Wednesday on Dynamite. Danielson had not competed since AEW Double or Nothing in May due to concussion issues. Danielson would face Daniel Garcia in his return bout, with the match not going as Danielson had hoped. Jake Hager would end up interfering in the bout, allowing Garcia to get the sharpshooter on Danielson. Danielson then shockingly pass out from the hold, losing the bout. Danielson should not worry too much about losing however, as we all know it has no effect whatsoever on the AEW rankings. (TJRWrestling)

4. SummerSlam to Take Place This Saturday

WWE SummerSlam is scheduled to take place this Saturday night at 8PM ET. So far eight matches are scheduled to take place for the event. Riddle was scheduled to face Seth “Freakin” Rollins at the event, but it was announced this week that the match was postponed due to Riddle suffering a “brachial plexus injury.” Rey & Dominik Mysterio will face The Judgment Day (Finn Bálor & Damian Priest) in a No Disqualification Match. Pat McAfee will once again wrestle, this time against Happy Corbin. Logan Paul will go one-on-one with The Miz. Bobby Lashley will defend The United States Championship against Theory. Liv Morgan will defend the Smackdown Women’s Championship against Ronda Rousey. Undisputed WWE Tag Team Championships The Usos (Jimmy & Jey Uso) will defend against The Street Profits (Montez Ford & Angelo Dawkins), with Jeff Jarrett as the special referee. Becky Lynch will try to once again become Raw Women’s Champion when she faces champion Bianca Belair. Finally, Roman Reigns will defend the Undisputed Universal Championship against Brock Lesnar in a Last Man Standing Match. WWE is claiming that this will be the last match ever between these two, with this being the 7th time the two have competed in a one-on-one match. However worry not WWE fans, as Goldberg is still free to wrestle both men. (TJRWrestling) 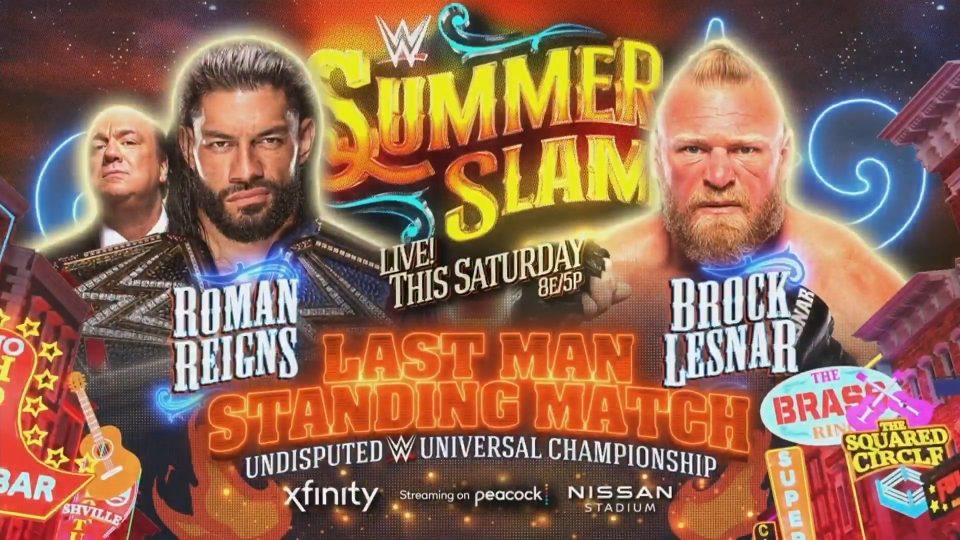 The news just kept on getting worse for Vince McMahon this week. This past Monday, WWE disclosed via an SEC filing that they have made a “preliminary determination” regarding payments made between 2006 and 2022 that should have been recorded as business expenses. The payments were for a total of $14.6 million. If that was not enough, it was also reported this week that The Securities and Exchange Commission and federal prosecutors have launched inquiries into McMahon’s misconduct. With all these allegations of financial and sexual misconduct, McMahon could either now go to prison or become President of The United States. (TJRWrestling)

New investigations by the SEC and federal prosecutors into hush-money payments made by WWE’s Vince McMahon to settle allegations of sexual misconduct hastened his retirement as chief executive, according to people familiar with the matter https://t.co/WDijh8uMD4

It is officially time to play the game in WWE. This past Friday, WWE released a press release announcing that Triple H would be permanently replacing John Laurinaitis as Head of Talent Relations. Laurinaitis is reportedly done with the WWE due to allegations of misconduct. Triple H was not done for the week because this past Monday it was announced that Triple H will be taking over for Vince McMahon as Head of WWE Creative as well. Ironically, Triple H got his new positions because someone else told someone to “Suck It.” (TJRWrestling)

Proud and honored to work with the best talent in the world. https://t.co/polNi8n87C

The most influential person in the history of professional wrestling retired this week. This past Friday at 4:05 PM ET, Vince McMahon announced that he was retiring from the WWE. The announcement came after McMahon was forced to step away from the company due to allegations of misconduct. Vince’s daughter Stephanie will now try to fill her father’s shoes, as she takes on the role of Chairwoman and Co-CEO along Nick Khan, who was the WWE President. As for Vince, he will now try to find something else to occupy his time for the first time in 50 years, as well as find a new dating pool. (TJRWrestling)

At 77, time for me to retire.
Thank you, WWE Universe.
Then. Now. Forever. Together. #WWE#thankful

That concludes another edition of The Top Ten Wrestling Stories of the Week. Thank you for taking the time to read this each week. Although I often joke, I have recently started refereeing with NYCW and respect more than ever what wrestlers do every week. I wrote an article all about it all right here. If you like what I do, despite my jokes being almost as bad as having your wife as your boss. Then follow me on Twitter @Fowlerwrestlin1.