Welcome back TJR readers! Did you spend all day Friday thinking of better things to do with 12 million dollars, and missed WWE Smackdown? Perhaps you spent all day Monday changing and feeding your newborn child (welcome to the world Adelyn Fowler), and missed Raw.

10. AEW All Out to Return to Chicago on Sunday, September 4th

After months of speculation that All Out may be moving to a different city this year, it was announced this week that it would be remaining in Chicago, Illinois. AEW All Out will once again be taking place from the NOW Arena in Hoffman Estates, Illinois outside of Chicago. The NOW Arena has been the home of every All Out PPV since its debut in 2019, with the exception of 2020 when it was held at Daily’s Place in Jacksonville, Florida due to Covid-19. This is obviously exciting news for the fans in the Chicago area (which hosted Forbidden Door in June as well), but also disappointing to other fans across the world who were hoping that AEW’s biggest event of the year may come to their town. Hopefully, AEW will eventually hold All Out in other cities, so other fans can also get the enjoyment of sitting in an uncomfortable chair while watching seven hours of straight wrestling without a bathroom break. 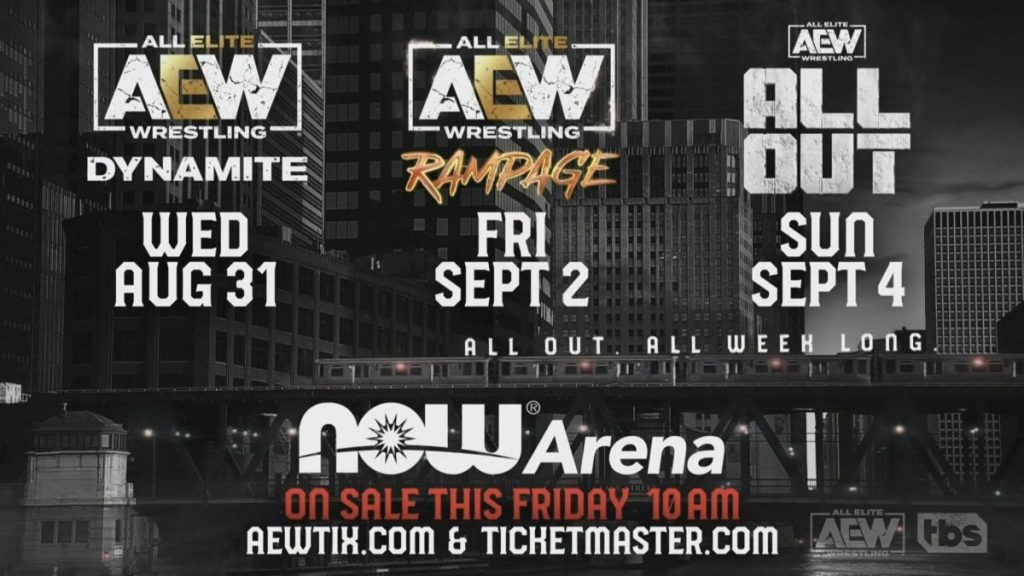 Ring of Honor will be returning to PPV on July 23rd with Death Before Dishonor. So far five title matches have been announced for the show, including Wheeler Yuta defending the ROH Pure Championship against Daniel Garcia. Mercedes Martinez will defend the ROH Women’s Championship against Serena Deeb. The Briscoes and FTR will once again do battle when FTR defends the ROH Tag Team Championships. Samoa Joe will defend the ROH World Television Championship against Jay Lethal. Finally, Claudio Castagnoli will get a chance to win his first world championship when he challenges ROH World Champion Jonathan Gresham. Since being purchased by Tony Khan last March, ROH has yet to secure a TV deal with the ROH titles just being defended sporadically on AEW television. Hopefully this PPV can lead to ROH having its own show, and its fans no longer being left in the Dark. 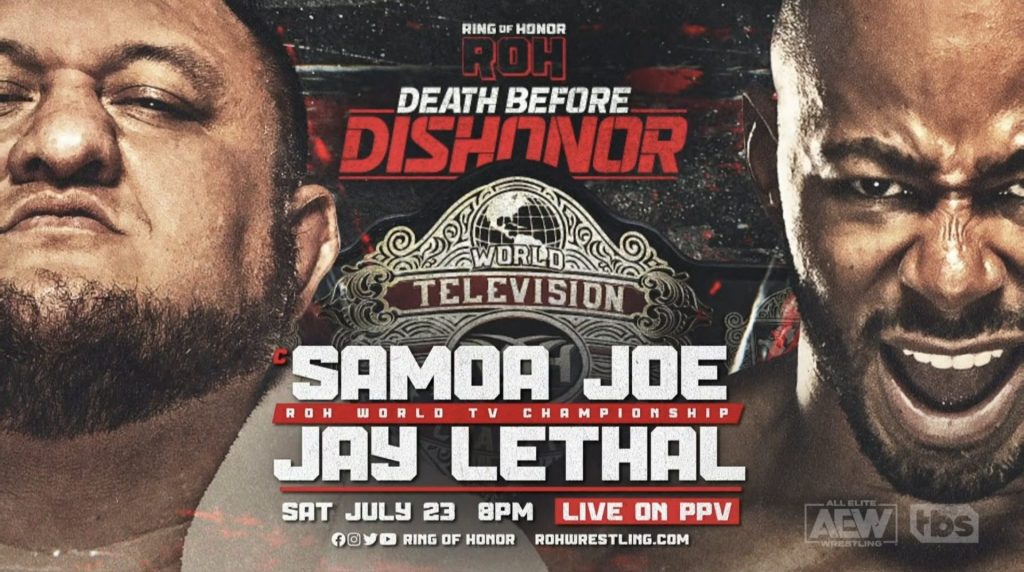 8. The Street Profits to Challenge The Usos at SummerSlam

The Street Profits will get another chance to become Undisputed WWE Tag Team Champions. This week it was announced that The Street Profits will once again challenge the Usos, with the match scheduled for July 30th at SummerSlam. The Usos defeated The Street Profits in a match of the year contender, earlier this month at Money in the Bank. To add even more intrigue to this rematch, it was announced that there will be a special guest referee for the rematch. This past Monday on Raw, both R-Truth and Omos stated they wanted to referee the matchup, but the referee has not been announced as of this writing. I would personally like to take this opportunity to let WWE know that I may be enticed to take the job, as long as the money is right and I can have a newborn baby strapped to my chest while I do it. (TJRWrestling) 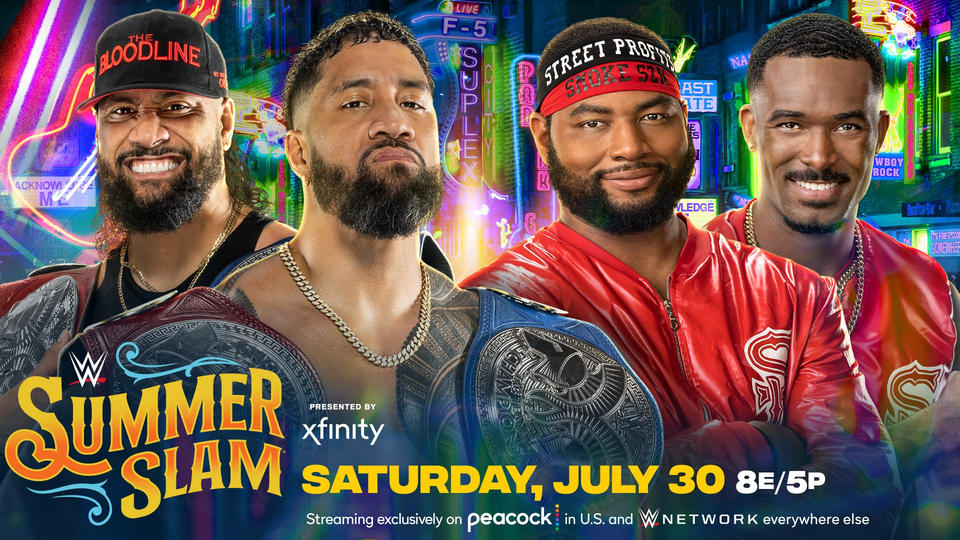 It appears that Roxanne Perez and Cora Jade’s NXT Women’s Tag Team Title reign will be a short one. This week on NXT 2.0, Perez was attacked in the parking lot prior to her NXT Championship bout against champion Mandy Rose. Rose would then come out to the ring later in the evening, stating that Perez was not woman enough to power through an injury and face her. Perez’s partner, Cora Jade, would then come out and tell Rose she would take Perez’s place in the match. Perez however, then hobbled down to the ring herself and faced Rose. Despite being injured, Perez appeared to be getting close to victory, until Jade shockingly hit her with a title belt. Rose would then get the pin, to retain her title. After the match, Jade proceeded to enter the ring and tell Perez that she was the one who attacked her. It is unclear what this will mean for the NXT Women’s Tag Team Championships, as there can’t be much more room on John Laurinaitis’s desk. (TJRWrestling)

Raw ended with a shocking turn this week. This past Monday’s Raw ended with a match between Theory and Riddle. During the match, Dolph Ziggler mysteriously came down to ringside. During the conclusion of the match, Ziggler surprisingly pushed Theory’s feet off the ropes to prevent him from cheating. Riddle then hit a distracted Theory with the RKO to pick up the win. After the match, Ziggler then entered the ring and proceeded to hit Theory with a superkick. Robert Roode is reportedly torn about Ziggler’s face turn, on one hand, he is sad he lost a tag partner but on the other hand, he is happy the line in catering is now shorter. (TJRWrestling)

5. Eddie Kingston and Chris Jericho to Meet in a Barbed Wire Death Match

Eddie Kingston and Chris Jericho are going to try to end their feud in the most violent way possible. On July 20th at Fyter Fest Night Two, Jericho and Kingston will face each other in a Barbed Wire Death Match. If that was not crazy enough, during the match the entire Jericho Appreciation Society will be suspended above the ring in a shark cage. Jericho and Kingston just competed against each other in a Blood and Guts Match a few weeks ago, and also in the Anarchy in the Arena Match this past May. Hopefully surrounding the ring in Barbed Wire will finally settle things between these two, as the only thing possibly more violent is a McMahon family counseling session.

At #AEWDynamite: #FyterFest Week 2, @MadKing1981 & @IAmJericho will battle it out in a Barbed Wire Deathmatch LIVE, with #JAS suspended in a shark cage, as part of #SharkWeek. Tune in on Wednesday July 20 at 8pm ET/7pm CT/8pm PT on @TBSNetwork! You won't want to miss this one. pic.twitter.com/5ez26aJV2H

Liv Morgan will not have to wait long to prove her title win at Money in the Bank was not a fluke. This past Friday on Smackdown, it was announced that Morgan would defend the Smackdown Women’s Championship at SummerSlam on July 30th against former champion Ronda Rousey. Morgan defeated an already injured Rousey at Money in the Bank earlier this month, after Morgan cashed in her Money in the Bank Briefcase. Morgan will now have to face a healthy and prepared Rousey, which may be a slightly easier task than being a WWE Diva in 2005. (TJRWrestling) 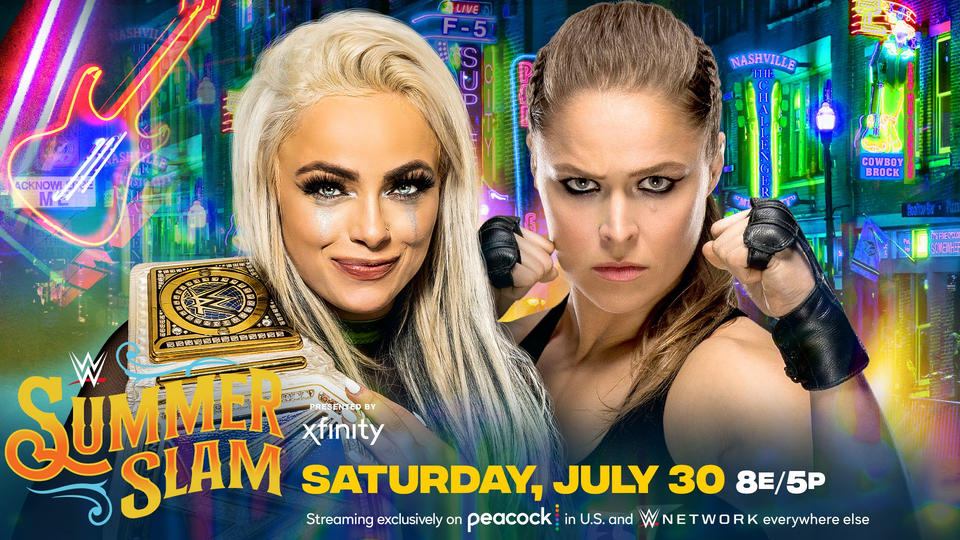 3. Swerve in Our Glory Capture the AEW Tag Team Championships on Dynamite

The Young Bucks’s second reign as AEW Champions ended up lasting less than a month. This past Wednesday during week one of Fyter Fest, Keith Lee and Swerve Strickland, known as Swerve in Our Glory, defeated The Young Bucks and Powerhouse Hobbs and Ricky Starks in a Triple Threat Match to capture the AEW Tag Team Championships. Swerve and Lee have only been teaming together since May of this year, and had only won three matches on television before capturing the titles. FTR has been the number one contenders for several weeks, with one thinking that they would be getting the title shot against Swerve in Our Glory at All Out in September. This all of course hinges on Swerve in Our Glory not losing the titles before then against some other random team that is ranked lower than FTR and gets a title shot before they do. (TJRWrestling)

2. Monday Night Raw to Reportedly Go Back to TV-14 Rating

The PG Era could finally be over. For the first time since 2008, Raw is reportedly going to have a TV-14 rating. It was first reported that the new rating would start this Monday, but those reports have been pulled back with it now not being known when the change will occur. Along with the new edgier rating, it is being reported that Paul Heyman will be returning to the writing team as well (according to a recent report from Wade Keller). It is unknown if this means blood, profanity and sexually natured programming will also be returning to Raw, with WWE returning to the Attitude Era completely. What is known is that if WWE does allow blood again, they will have a much better chance of signing Jon Moxley once his contract is up with AEW. (TJRWrestling)

This is a wild situation. There’s a lot happening behind the scenes

WWE Raw won’t be going to TV-14 on July 18th but still in consideration for a later date.

Will go live tomorrow morning to break this down. https://t.co/F29mP8xCwy

The news got worse for Vince McMahon and the WWE this week. This week it was reported by the Wall Street Journal claiming that McMahon had paid over $12 million in “hush” money over the last 16 years. Included in the payments was a $7.5 million payment to a female wrestler, who was coerced into having oral sex with McMahon. To make matters worse, this female wrestler was reportedly fired in 2005 after resisting further sexual encounters. It was also reported that McMahon paid $1 million to another female in 2008, after McMahon reportedly sent her unsolicited nude photos. Finally, it was reported that McMahon paid another $1 million to a former manager who he attempted to initiate a sexual relationship with. We will now have to wait and see if Vince used all his own money for all these payments, or if Vince had to cancel one of Brock’s appearances for the money. (TJRWrestling)

WWE's Vince McMahon paid out $12 million in settlements to suppress allegations of sexual misconduct and infidelity over the past 16 years, people familiar say https://t.co/6HHLPmtIxX

That concludes another edition of The Top Ten Wrestling Stories of the Week. Thank you for taking the time to read this each week. Although I often joke, I have recently started refereeing with NYCW and respect more than ever what wrestlers do every week. I wrote an article all about it all right here. If you like what I do, despite my jokes being almost as bad as a Vince McMahon dick pic. Then follow me on Twitter @Fowlerwrestlin1.