Welcome to the WWE Smackdown Reaction, where I offer my take on this week’s show in Birmingham, AL.

A recap from the MSG house show leads us into Promo Time with Brock Lesnar. Lesnar is mad and ready for blood tonight. Paul Heyman comes out to inform us that Roman Reigns is not in the building. Lesnar chases Heyman out of the arena. It was a great opener. I wonder who Lesnar is going to wreck tonight?

Before our opening tag team match, Sheamus and Ridge Holland introduce us to their buddy, Pete Dunn. Dunn had an unfortunate encounter with the WWE Random Name Generator and he is now called Butch (BUTCH?). Le sigh. Sheamus and Holland face off against The New Day’s Kofi Kingston and Big E. The match was not too bad featuring power guys. It was not really anything special though. The ending was rather awkward though. Holland totally botched a belly-to-belly suplex on Big E, dropping him on the top of his head. Sheamus just kicked Kingston and that was it. That must have been an audible to end the match.

UPDATE: We would find out later that Big E suffered a broken neck as a result of landing on his head. Big E has provided an update that looks like it is not as serious as it could have been. On Saturday morning, he posted an update and it sounds like he dodged a major bullet. I wish him a speedy recovery. He is super talented and hope he can bounce back from this.

“Stone Cold” Steve Austin does a pretaped response to Kevin Owen’s KO Show invite for WrestleMania on last week’s Raw. Austin will be at Mania. That should be good.

Up next was supposed to be Drew McIntyre and The Viking Raiders teaming up to take on Happy Corbin, Madcap Moss, and Jinder Mahal. After McIntyre entered the ring, the trio jumped The Viking Raiders before squaring off with McIntyre. McIntyre held his own and Corbin still has no chance at WrestleMania.

Promo Time with “Rowdy” Ronda Rousey is next. Rousey pointed out that she learned the Ankle Lock from her mentor, Kurt Angle. Charlotte Flair comes out and literally adds nothing of value before leaving. Rousey did a good job with the promo exchange, so that’s a good sign.

It’s time to feel the glow as Sasha Banks and Naomi take on Natalya and Shayna Baszler next. Queen Zelina and Carmella were at ringside. Banks finished Natalya off in this quick match to build some momentum for Mania. The match was nothing really special or noteworthy.

Promo Time with The Usos is next. Quick, somebody call Lesnar. Usos claimed they have no competition for WrestleMania so Rick Boogs and Shinsuke Nakamura come out to make the challenge. Boogs appeared to be hurt. The Usos would grant the tag match only if Boogs beat Jimmy in a match right now.

After the match started, Boogs took off his knee wrap and showed he was not injured. Crafty move there. No Lesnar appearance or music here, so Boogs beats Jimmy clean to get the WrestleMania match. I suspect there will be a title change there.

Before we get to the Intercontinental Championship rematch between Sami Zayn and Ricochet, Austin Theory came down to pick a fight with Pat McAfee and lost. McAfee beat up Theory before both were escorted to the back, leaving Cole to call the match by himself.

The match between IC Champion Ricochet and Sami Zayn was pretty good, but I liked last week’s match more. Zayn can make anybody look good and he made Ricochet look great again this week. Ricochet retained after the 630 Splash. I wouldn’t mind another match between these two.

We only had a few minutes left so we flashback to 2019 with another parking lot fight between Ronda Rousey and Charlotte Flair. The only thing missing here was Becky Lynch and I think she would have made it a little bit more interesting. Anyway, Charlotte is strong because, you know.

The Ricochet/Zayn rematch was really good. Zayn made Ricochet look great again and it was a solid title defense for Ricochet. Also, congratulations to Ricochet for main eventing Smackdown two weeks in a row.

Lesnar’s opening promo was great but he was nowhere to be seen after the opening 10 minutes. It felt like a small logic gap but the Lesnar/Reigns face-off will take place next week. 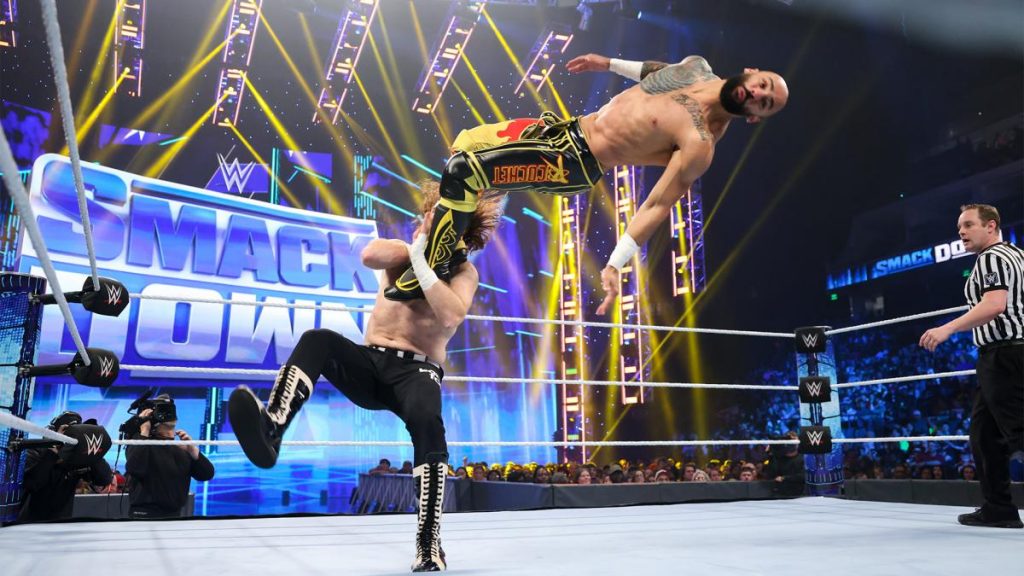 Once Big E got hurt, it really took the steam out of the show. The main event tried to bring up the show though.