Welcome to the Smackdown Reaction, where I offer my take on this week’s show in Evansville, IN.

We kick off the show with Promo Time with The Bloodline. Roman Reigns cuts a promo on Brock Lesnar getting suspended and fined $1 million for his actions after Crown Jewel before droning into his usual pointless promo to bring out the New Day. King Woods offers a challenge to Jimmy Uso, loser bows to the real king of Smackdown, which is accepted. There’s our main event.

Our opening contest has Naomi taking on Shayna Baszler. The match was okay, but we wind up with a Dusty Finish in a non-title match? Naomi had that match won after pinning Baszler, but Sonya Deville restarted the match and Baszler choked out Naomi to win. These heel GM feuds just don’t work anymore and we need the payoff real soon.

Ridge Holland introduced himself backstage with a quick promo with Kayla Braxton, hinting towards so sort of involvement with Sheamus since he seems to idolize him. That could be something good.

Backstage Promo Time with Shotzi Don’t Call Me Blackheart. Shotzi said she was tired of losing out on Smackdown. She’s lost her last name, title opportunities, tag partner, and the WWE Universe support. Sasha cost her her biggest opportunity last week and she is going to wreck Banks for it. No more tank either. I’d like to see how a heel Shotzi can get over with the fans. Her face act was very popular.

Tag team action is next with Angel Garza and Humberto Carrillo, now called Los Lotharios, taking on Cesaro and Mansoor. This was your standard “Let’s put the regular tag guys over with someone credible” formula. Los Lotharios looked good and Cesaro made them look credible in a tag division lacking credible teams. Push Cesaro.

Aliyah introduced herself to Jeff Hardy before bumping into Sami Zayn, who offered wardrobe advice as the elder statesman on Smackdown. Aliyah was not impressed with the advice.

Drew McIntyre is out next for his open challenge that is accepted by Ricochet. This was as awesome as it could be for the time they were given. McIntyre and Ricochet match up well and they came up with a finish that would impress Randy Orton. Ricochet went for a moonsault off the second rope and McIntyre drilled him with a Claymore as he flipped over. After the match, it appeared that they were going to start a program between Ricochet and Mustafa Ali. 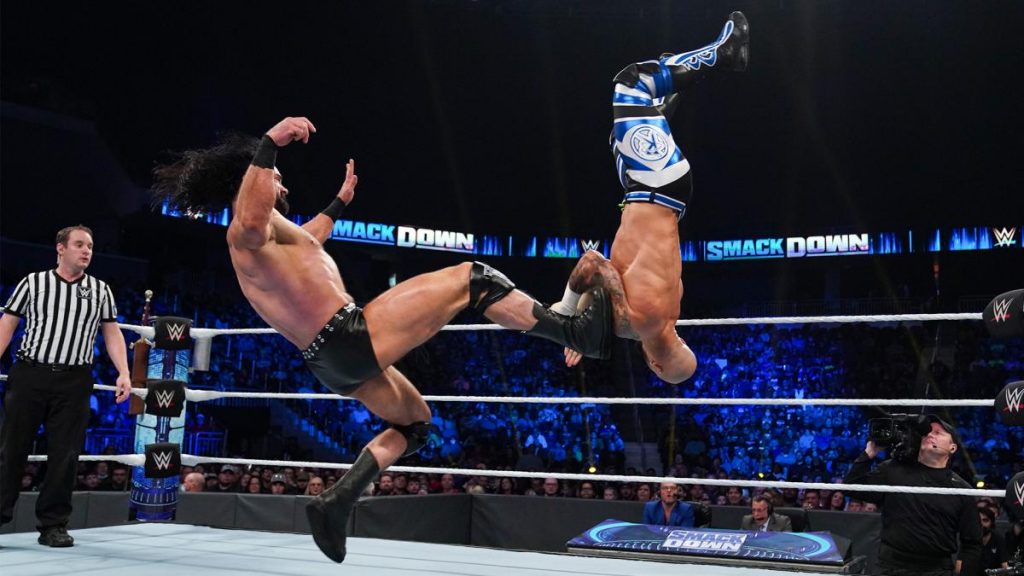 Up next, the live audience was punished by having to suffer through another Happy Talk (hosted by Happy Corbin with Madcap Moss), even though the Viking Raiders were the guests. The Happy Talk show really needs to be deep-sixed. Its only purpose here was to lead into the tag match between the four of them.

The tag match was okay. Corbin and Moss got too much offense in on the Viking Raiders. Corbin pulled Moss out of the ring because he was getting beat up and they walked away to take a count-out loss. I guess Corbin needs to be protected now in his matches too?

Sami Zayn comes out next to show Hit Row how to make an entrance. The B-Fabless Hit Row comes out and makes a fool out of Zayn before he leaves to the back. This was another good introduction segment for the group. It’s a shame B-Fab got released since she was an integral part of the act.

Main event time with Jimmy Uso taking on King Xavier Woods to determine who bows down to who. The back and forth match was really good, as you would expect from both teams. It was definitely the match of the night, hands down. They were given sufficient time to get the story over. The ending came with the Usos trying to do their assisted pin that the ref caught and Woods hit a super deadly ROLLUP OF DEATH~! for the win. After the match, Uso dragged out the bowing down to give Reigns time to get to the ring for the tired beatdown segment to close the show.

The match part of the main event was really good, but you would expect that from the wrestlers involved. The New Day and Usos match up well and can work with just about anybody whether in tags or in singles.

The McIntyre/Ricochet match was good. It needed more time to be something special.

The Bloodline after match beatdowns are getting repetitive and boring. We know that nobody will come out to save The New Day because Big E is on Raw and there are no credible challengers for the Universal Title. Perhaps next week, King Woods can issue a royal bounty on the Bloodline and it can be answered by RK-Bro and Big E since Survivor Series is in two weeks. A little promotion wouldn’t hurt, would it?

Happy Talk just needs to go away. It probably makes Vince laugh so it won’t, but why do the fans have to suffer?