It’s Saturday… no wait, it’s Sunday and you know what that means! Welcome one and all to the latest installment of the AEW Week in Review here at TJRWrestling.

This is one of the few weekends of the year where we have a PPV, and on a Saturday no less, so the Week in Review is a day late to account for that star-studded show. The AEW PPV Full Gear delivered on all accounts, even having our fearless leader John Canton grade it just a hair below the All Out PPV in September. Considering going into this show there were some matches that felt questionable for the PPV, to finish with a 9/10 grade, one that I would probably agree with, says a lot about how this show actually over-delivered. Let’s get into all the details.

I do want to give a shout-out to the two best TV matches this week, since they’re overshadowed by such a great PPV with multiple candidates for this category. I thought Pac vs. Dax Harwood on Dynamite and Jungle Boy vs. Bobby Fish on Rampage were both fantastic.

As for Full Gear, I narrowed it down to three choices, Darby vs. MJF, the 6 man Falls Count Anywhere, and the Hangman vs. Omega main event. All three were great for different reasons.

Darby/MJF was great as just a standard wrestling match, one that Darby doesn’t necessarily do very often to show he can actually wrestle. I even predicted the finish and still thought it was done perfectly and added to the story.

The 6-man match with Christian Cage/Luchasaurus/Jungle Boy beating Young Bucks/Adam Cole was just complete anarchy with some really creative ideas such as the thumbtack kneepad for the BTE Triggers.

The main event with Hangman Page beating Kenny Omega was just a beautiful conclusion to a two-year story with tremendous storytelling as well.

As much as Hangman/Omega was the draw for me going into the show, I’m giving best match to the 6 man match by just a hair. The deciding factor was twofold. One, I really thought Omega/Hangman would have more nearfalls and I’m surprised they didn’t even attempt Hangman kicking out of the One Winged Angel. I think it was a couple of dramatic nearfalls away from being a 5-star match and winning this week. Secondly, if you’ve read these reviews of mine, you know how much I’ve criticized the booking of Jungle Boy recently. He NEEDED this win. The fact that they purposely made sure he was the one to get the pin and the emotion afterward was him exorcising his demons of the Superkliq, was fantastically done and I give AEW a lot kudos for the presentation of it. 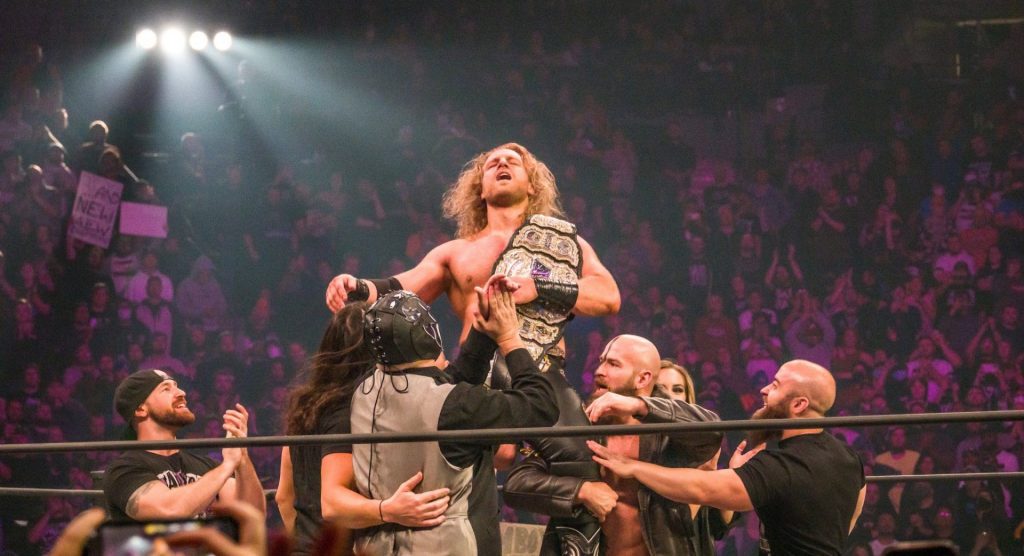 While it may have lost Best Match by a hair, it wins Best Moment by a mile. It’s “Hangman” Adam Page winning the AEW Title after an incredible 2+ year journey to get here. The crowd, which did appear dead at times, was more than ready to be a part of Hangman’s history and they were chanting “Cowboy Shit” from the jump. Now that the story has ended the proper way, with Hangman as champion, I can say this is my favorite story told in my lifetime as a wrestling fan. It had EVERYTHING. It was the perfect sendoff too, with him embracing The Dark Order. Two entities that separately didn’t realize they needed each other months ago, and then when they came together, created something beautiful.

Hangman is not the prototypical babyface. His Twitter profile calls him the Anxious Millennial Cowboy, but yet the fans love him like no other. It just speaks so much to the raw honesty he brings to his character. It’s him, just with the volume turned up. I’m really glad AEW didn’t overthink this and gave us a moment that will live in the company’s history.

Critique of the Week 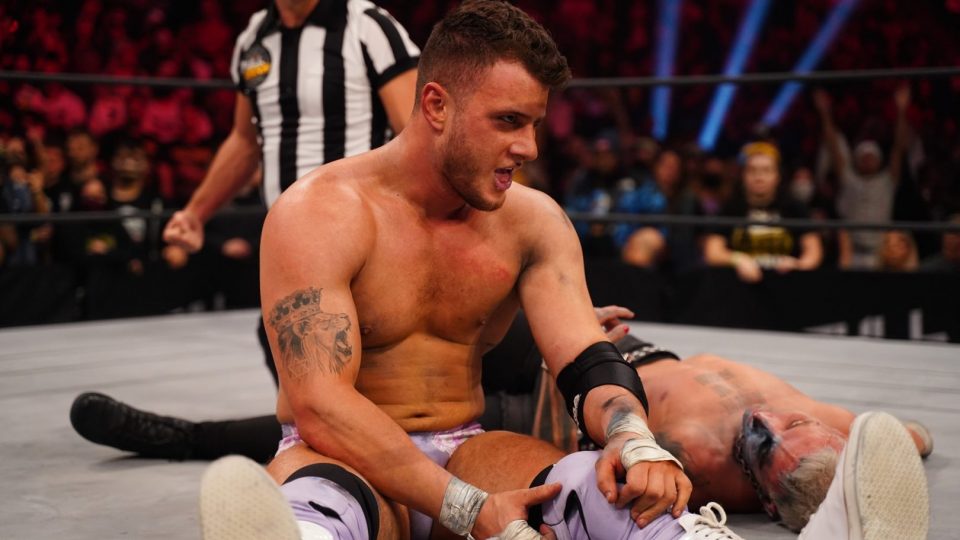 The show had a runtime of 3 hours 58 minutes, which is exactly what Tony Khan said would happen in his pre-show media press conference, saying it was intended to be a 4-hour show. However, if you were like me when we were well over an hour into the show and only on our third match between Bryan Danielson & Miro, you were probably thinking there’s no way this show ends in 4 hours.

Only one match went under 15 minutes, Punk vs. Kingston, and ironically that’s the one match that everyone probably wishes we could’ve gotten more of. I feel like this show would’ve been even better with just a trim down to 3 hours 45 minutes. Darby and MJF went 22 minutes, so maybe trim that down to about 18 minutes. The Street Fight went 19 minutes, and it could’ve easily gone 13-15 minutes. Trimming a few matches and even giving Punk/Kingston a couple more. If you have a runtime that’s just 15 minutes shorter, I think everything feels stronger and tighter.

I understand that AEW is the “wrestling” company, and I’m sure not complaining about quality matches. There is a point though, where it becomes bloated and just going long for the sake of going long.

We now turn towards Virginia as Dynamite will be taking place there Wednesday night. Nothing has been announced for Rampage on Friday, but Wednesday’s show looks to be outstanding. Being in Virginia, they are in the home state of the new AEW World Champion, so it should be one hell of a celebration for Hangman.

As we found out at Full Gear, the newest signee to the company is Jay Lethal. That’s a great pickup for the company and he’s coming in to take on Sammy Guevara for the TNT Title. That’s an outstanding debut match to have and I can’t wait to see what those two come up with.

The biggest news to me personally though, The Stone Pitbull himself is coming to AEW! Tomohiro Ishii from New Japan Pro Wrestling will be joining his new CHAOS partner Orange Cassidy to take on The Butcher and The Blade. Ishii is my favorite wrestler in the world not in AEW. I love the guy and cannot wait to see him spotlighted here in AEW.

This Week in Vlogs

BTE This week was another strong effort after a few down weeks recently. This week’s episode clocks in at a surprising 37 minutes. There’s a lot of behind-the-scenes footage with The Elite at the beginning of the episode, but this week’s episode is made by the ending. We have another HILARIOUS bit involving John Silver & Alex Reynolds trying to “help” Adam Cole get over. This time they’re in his hotel bed & there’s just a ton of gold in this bit. I don’t know how Adam kept a straight face through it all. The last bit is The Superkliq trying the Hot Jelly Bean Challenge. There are flavors like Carolina Reaper & Habanero Pepper that they’re trying out and it’s quite entertaining. Stay until the very end for a cameo from Orange Cassidy that made me cry laughing.

This week in Sammy’s Vlog, it’s mainly all behind-the-scenes footage, which is still funny and entertaining. The only bit is continuing the “kidnapping” of Sammy & Fuego by Dean Alexander & Alan Angels trying to find them. This one was a bit of a miss for me, but everything up to this point was fun to watch. I would give the head-to-head battle to BTE again this week.

That’s it for this week! Hopefully, everyone enjoyed this week of AEW as much as I did. Next weekend, unfortunately, there will not be a Week in Review as I’ll be on vacation and nowhere near a computer or laptop. So I will see you all in two weeks during Thanksgiving weekend. Be sure to hit me up on Twitter, @KTankZamora, and let me know what you think and what you want to see discussed in these weekly recaps. Thanks for checking out the column once again. As always, don’t do anything I wouldn’t do… but if you do, name it after me.