The World Championship Wrestling Bash at the Beach 1996 pay-per-view event was one of the most historically important wrestling shows in history.

Everyone remembers that famous moment during the main event when Hulk Hogan turned heel for the first time in almost a decade and joined the New World Order. But what fans tend to forget is that BATB also had one of the best opening matches in wrestling PPV history. But was it really that great? Read on to find out.

The only real story here is that these two were rivals for a long time in Mexico and now they were continuing their feud in the United States. 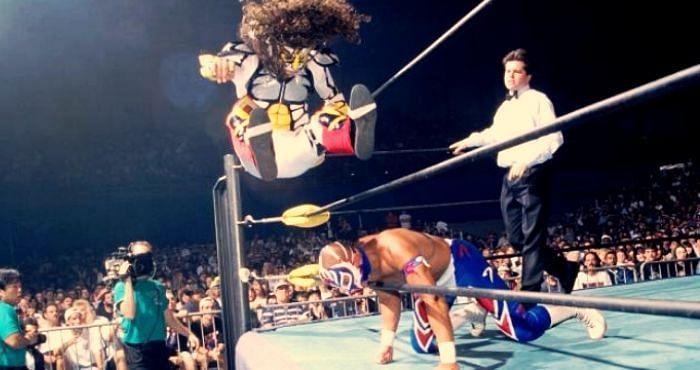 Mysterio offers a handshake but Psychosis slaps him instead. He lands an armdrag that sends Psychosis to the floor. Psychosis returns to the ring and Mysterio takes him down by his leg. The two wrestlers trade leglocks until Psychosis locks in a bow-and-arrow hold, which Mysterio escapes into a pin for a quick one-count. Mysterio applies an armbar but Psychosis counters with an STF-type hold but targeting the arm not the head. Psychosis follows with a headscissor that traps both arms and pushes Mysterio’s head forward but Mysterio escapes and goes for a deathlock on Psychosis’s legs but Psychosis gets a ropebreak.

In the ring, Psychosis slams Mysterio and gets a two-count off a running leg drop. Mysterio tries fighting out of a grounded cobra clutch but Psychosis maintains control with a simple leg trip. Mysterio tries fighting back again so Psychosis answers with another slam and a top-rope diving guillotine leg drop for another two-count. Mysterio crawls over to the ropes but Psychosis cuts him off with another guillotine leg drop to the back of the head. Psychosis gets a mild reaction following a running clothesline, and when Mysterio kicks out of another cover, Psychosis applies a figure-4 neck lock. Mysterio fights out but then Psychosis hotshots him across the top rope. Mysterio counters an Irish whip by ducking down and then skins the cat on the ropes. Psychosis chases him and hits a forearm but then Mysterio counters with a monkey flip from the apron that sends Psychosis into the ringpost. Mysterio follows with a running headscissor from the apron to the floor and a springboard Frankensteiner in the ring. One, two, Psychosis kicks out.

Mysterio dropkicks Psychosis’s knee after an Irish whip and starts using different leg holds on the mat. Mysterio lands a knee crusher/knee stomp combo and then hits a corner dropkick for a two-count. Psychosis counters an Irish whip with a drop toehold into another headscissor hold. Psychosis grabs the ropes once to try and add more pressure to the hold, but the ref sees this and orders Psychosis to release Mysterio. In response, Psychosis sends Mysterio flying head/neck-first into the top rope. Psychosis follows up with an inverted DDT and then a press drop onto the barricade. Still not done, Psychosis dives off the tope rope to the floor with a senton, likely crushing Mysterio in the process.

This was another fantastic display of great lucha libre. Even without much of a reaction from the live crowd, the wrestling here was tremendous. Everything was so crisp and smooth, yet it didn’t look so blatantly choreographed or phony. Even though it was lucha and lucha is inherently more about dazzling moves and acrobatics, this match still felt competitive and tense. I don’t know what’s more impressive; the fact that Mysterio had such a great throwaway match more than twenty-five years ago, or that he’s still wrestling as of September 2022.

There wasn’t anything deep here; this was more of a spot-fest style match except it took place in 1996 in a time when even the most spot-centric wrestling match was still built around realism and competition instead of exaggeration or silliness. There’s something different about how Mysterio and Psychosis wrestled here compared to later/more recent wrestlers. When Mysterio hit his hurricanranas and Frankensteiners, those moves looked like they actually hurt and that Mysterio was using his strength and momentum to ‘snap’ Psychosis into position. I’ve seen many later wrestlers try and copy Mysterio only to fail. And even though Mysterio had to tone a lot of things down when he first joined WWE, he was way more fluid, crisp, and compelling in WCW when he was in his prime. This match took place at a time when Mysterio, Psychosis, and other luchadors first combined their lucha style with the more psychology-driven southern American style. Before coming to the states, Mysterio and Psychosis were just as athletic and dazzling but their matches were more chaotic and hard to follow. Here, the wrestling was a bit more grounded. Neither wrestler was fully polished yet; Mysterio would reach his first major peak a year later with Eddy Guerrero. But it was a major improvement from some of his earlier work and benefitted from being novel in front of this audience.

Strangely, though, this match, for all its positives, barely got any reaction from the crowd. This was longer and more competitive than Mysterio’s match with Kurt Angle at SummerSlam 2002, which is widely and rightfully hailed as the best opening match in WWE history. Even though this match had solid scientific grappling and a halfway decent story (that was a hampered somewhat by inconsistent selling and limbwork that went nowhere), the crowd barely reacted to anything. This wasn’t the ‘hot opener’ that it was supposed to be; the crowd didn’t wake up until the very end of the match, and even then their reaction was mild at best, thus defeating the purpose of the hot opener in the first place.

I know this will sound cliché, but this match should’ve taken place in front of a different crowd. If it happened in Mexico or in front of a crowd more familiar with lucha, then there’d be tons of screaming and cheering. If it happened in Japan, the crowd would at least applaud loudly, even if they had no idea who these guys were. Instead, it happened in front of a WCW crowd that simply didn’t care about this match for over half of it. Mike Tenay did an awesome job explaining these wrestlers’ backgrounds and why we should care about them, but even with his careful wordsmithing it wasn’t enough to get a proper crowd reaction. And since crowd reactions are still considered fairly important in wrestling, the poor reaction here hurts the match a bit.

And yet, this match was way more believable (and therefore exciting) than so many matches that have come in its wake. Many wrestlers have tried to copy Rey Mysterio and his contemporaries but none have succeeded because Mysterio in particular really was and is that special. He was a child prodigy as a rookie and has earned Hall of Fame status for his in-ring skills. And Psychosis was fantastic here. All he did was wrestle and tried to slow Mysterio down but that was impossible because Mysterio was just so great at fighting from underneath and overcoming the odds in the end.

Even after 25 years, this is still a great match. It’s a prime example of what Mysterio was like before he bulked up and slowed down in WWE. Most people have only seen Mysterio in WWE; what he did before that was much better than that on the whole.