The best moment of WWE TV I watched all week didn’t involve any wrestling. It wasn’t because the standard of matches was poor on Raw and Smackdown; it was because the start of Tuesday night’s show was that damn good. For those who haven’t seen it, I highly recommend watching the Miz TV segment that kicked off the show. Go ahead, watch it. I’ll wait.

See? Wasn’t that great? Now I’m normally someone who will moan about there being too much talking and not enough wrestling on WWE shows, but I’ll forgive them for that excellent segment. While it was no ‘Austin 3:16’ moment or a pipe bomb that will forever be remembered, it was a quality display by two of the best talkers in WWE. It was good on so many levels.

First, let’s be under no illusion that The Miz is doing some of his best work right now. Though he may not be top of the pyramid holding a title, he’s consistently on his game. Miz can be considered a veteran at this point in his career I believe. From a tough beginning, he’s soared and held almost every title there is to win. His charisma, attitude and presence on the mic is excellent. He hasn’t really deviated much in terms of character, but his made it uniquely him, which is difficult to do in the modern era. Does he have old school heel traits? Yes, of course, he’s a student of the game, but he’s evolved his character into a very believable one on screen.

His tirade against John Cena was reminiscent of his very powerful verbal assault on Daniel Bryan on the now infamous Talking Smack segment with Rene Young. He lives that character through what he says, how he acts and what he allows us to see. You believe in what Miz says, through the sheer passion in his delivery. The addition of Maryse, who styles herself so well and carries her persona and equally heelish attitude on a level equal to the Miz, is the cherry on the cake. Her sideways looks, sneers and dismissive hand gestures give her a wonderful persona. They’re too good for the likes of us, and they know it. 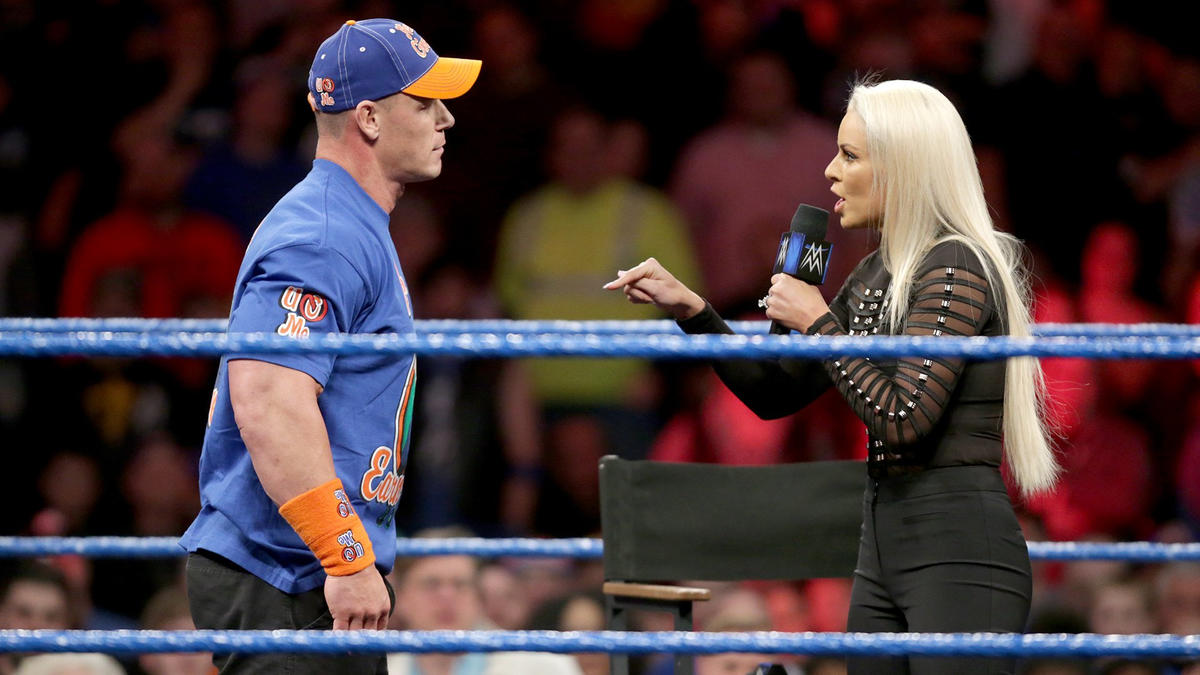 What I loved about the interaction between Miz and Cena was that after thinking about what they said, it had layers of meaning that couldn’t be seen without giving the words some thought. Miz chewed out Cena live on the air. He called him out, labelling him a hypocrite – Cena ranted about how the Rock was a part timer, going off to Hollywood, and now Cena is treading the same path. Miz shoved that rhetoric right down Cena’s throat, but if we take a step back, how does Miz portray himself to us? The A-Lister, Movie Star etc. What hypocrisy to use that logic and attack on Cena. Only an ass would say that. Only a bad guy would say that. And that’s where the layers of character come in. Miz screamed insult after insult at Cena, knowing the biggest hypocrite in the ring was himself. Great storytelling.

Miz can also tap into the crowd, he has a good feel for the audience. He gently led them along, listening out for their cue to be quiet and allow them to jeer about Cena. He very rarely allows the ‘what’ chants to even get momentum, such is his excellent mic skills.

For Cena’s part, I’m glad he allowed Miz to vent for over five minutes without reply. Yeah, the story was that Miz had Cena’s mic cut, but that wouldn’t stop him from snatching Miz’s mic. Cena played the face-off excellently and delivered when he got his chance.

I’ll be honest here and state that John Cena isn’t my favourite wrestler and the reason behind that has nothing to do with the man himself. I believe there’s a hell of a lot more to his offense than a five knuckle shuffle and the AA. I think he’s been held back by those backstage: give the fans what they came here to see, John. Nothing flashy, just the standard move set. Keep the kids happy. I feel bad we’ve rarely seen Cena turned to the max in WWE. I have a hell of a lot of respect for the man, but I think his best work comes when he’s serious, determined and angry. Cena doesn’t need a heel turn. He doesn’t need to be a bad guy. He just needs to be a juggernaut against near-impossible odds. That’s when we see the best of Cena.

I don’t buy the intentional squashing of talent stories. I believe stories about a man who is a WWE guy who does what he’s told to the best of his ability. On Tuesday night, he did just that with his riposte to the Miz. He doesn’t need to go back to the Thuganomics. He doesn’t need a silly rap. He just needs to be himself. I think it’s moments like this that is what sets Smackdown and Raw apart. Raw seems a little out of control. How many times do we see wrestlers demand matches from Foley & Steph, only to get what they want? On Smackdown the matches are usually made beforehand without needless arguing to set them up. Smackdown also has a great knack of making promos more personal in nature. They’re more intense and you get the feeling the talent really buy into it. They’re not afraid to lift the curtain on their performers and give a glimpse of the backstage, personal lives they have. Don’t believe me? How about Cena and Nikki, Miz and Maryse, Ambrose and Rene Young, Daniel Bryan and Brie? On Raw we only have Rusev and Lana and that’s rarely explored in a deeper storyline, other than they’re married and… that’s it.

Whatever happens over the coming weeks, I can’t believe that Miz and Cena’s promo was a throwaway item. I’d guess it was the Smackdown writers perhaps testing the waters to see if there is anything there by having them feud. Does bringing Maryse and Nikki make it a better story? I don’t know. Perhaps Maryse has been training and can go up against Nikki? Miz and Cena can certainly give a good match. Miz is a natural heel, yet is someone the fans don’t clamour to see turn. Can I see him turning? Maybe, but would it help his character? Whatever the long term plan, another face to face would be essential viewing, and knowing Smackdown, perhaps it’ll be turned up a notch or two. Maybe it will become more personal, more in-your-face and more intense. For me, that would be, as the Miz would say, Awesome.

What do you think? Was the promo the highlight of the week? Would Cena and Miz make a good Wrestlemania match? Does it need to be more personal to give it more hype? I’d love to hear your thoughts. As always, thanks for reading.

TJR Retro Blog: 10 Reasons Why 2000 Was My Favorite Year and The Best Year in WWE History