Everyone likes the New Day right? They have invigorated the tag division, provided good comedic moments, and most importantly Big E, Kofi, and Xavier Woods appear to be having the time of their lives. I’m a big fan of tag team wrestling and while the division is currently suffering from injuries and stale teams lacking in character development (I’m looking at you, Fernando and Diego) the top two teams in the division right now have my attention squarely focused on those shiny copper belts that have too often been an afterthought in recent history. I want to look a little closer at the individuals that make up the New Day and where, in my humble opinion, they should go from here.

For years Mr. Kofi Kingston was the smiling, happy-go-lucky generic baby face. It was an act he played pretty well but it wasn’t anything we hadn’t seen over and over again. He showed off his skills by doing crazy Royal Rumble spots and shining in multi-man matches like Money in the Bank but year after year the character just didn’t evolve unless you count dropping a fake Jamaican accent as character development. It wasn’t until his mini-feud with Randy Orton years ago that I saw how much potential was being wasted by creative in regards to such a talented wrestler who clearly had a lot of potential outside of his current spot monkey role. Kofi should have gotten a mid-card heel run years ago but better late than never, right?

Big E had one of the best gimmicks in NXT history. The 5 count was amazing and gave his matches a little extra flavor you typically don’t get in a squash by a powerhouse. He came to the main roster and became a silent body guard type, but if you happened to see the coverage of Big E running around New Orleans in the lead up to WrestleMania 30 you would have found out that he had this great animated personality and demeanor that just didn’t translate over to his TV persona. I’m not sure why it took so long for creative to let this guy speak and bring his own personality into the character, but it is really working for him right now.

Then you get to Xavier Woods. He doesn’t have the ring savvy of his partners, but I’ve been really impressed with his promo ability and presence during the matches. His side comments during New Day tag matches has been hilarious and the fan interaction he has at ring side can be a great cutaway moment during a rest hold or slump in the in ring action. He’s not the manager, but he is presented as the brains of the group. This falls in line with his real-life PhD credentials and I think it’s a smart move by the WWE to promote the academic achievements of their superstars.

The New Day debuted as faces but were booed relentlessly because nobody cared about these guys and their message of positivity was about as lame as it gets. Kofi was stale, Big E had no personality, and Woods was an unknown tag along. Now I fully expected WWE to drop the gimmick and move on, but they really surprised me by embracing the fan reaction and letting the New Day go fully over the top with the gimmick and develop a unique 3 person promo style and a clap along catchphrase whose cadence has been incorporated by the fans into other chants in matches where the New Day isn’t even involved. 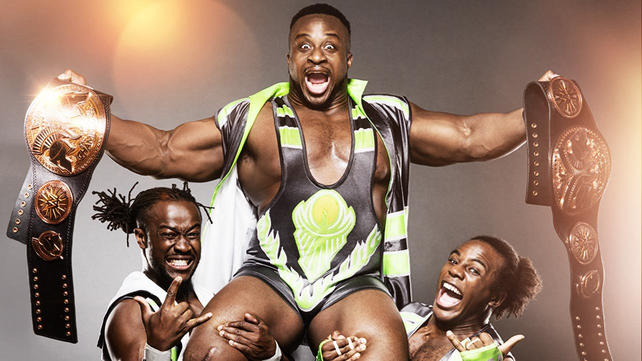 The consensus seems to be that the New Day dropped the tag titles way too soon and while I have to agree, I like the Prime Time Players in the baby face role with the New Day doing everything they can to get under their skin to get a rematch for the Tag titles. The New Day gets more recognition right now and the Prime Time Players run is seen as nothing more than a PR move by WWE to showcase celebrity dad of the year Titus O’Neal and the token homosexual Darren Young. I can only speculate on what WWE’s motivations may be, but I have always enjoyed the work of the Prime Time Players and they have delivered some great moments from the guest commentator position. Just recently JBL was absolutely schooled by Titus O’Neal and it was music to my ears after all the young talent JBL has buried in his run at the commentary booth. Regardless of how they got in the position they are in, the Prime Time Players are entertaining wrestlers, characters, have a great presence, a polished act, and seem to be genuinely good guys with a positive attitude.

I expect the New Day to come out on top over the Prime Time Players, but once they have the belts back where do they go from there? The Lucha Dragons are currently healthy and could be built up to be credible contenders once the New Day/PTP feud concludes and we should see the Usos back in action by the fall, just in time to keep the New Day busy for a few more months. I think a lengthy reign during the down time after Summerslam, but before the Rumble would make for great TV and the 3 man advantage of the New Day helps keep them from becoming babyfaces by winning too much.

They don’t have to hold the belts the entire time, but the New Day should stay together until AT LEAST this time next year. Unfortunately the WWE doesn’t have the best track record here and will often break up teams just for the hell of it with no long term planning to be found. Don’t blow it up unless you plan on moving someone up the card from the group. Just thinking about a potential New Day/Enzo and Cass rivalry sometime next year is really exciting. Can you imagine the promos?

Did you see their entrance on Raw this week? Watch it below because it’s hilarious.

So many wrestlers seem to be going through the motions on RAW these days, but not the New Day. You can see how much fun they’re having and that really draws me in to their matches and promo work. I will consider it a small miracle if these guys are still a team next year but due to forces beyond the control of even Vince McMahon times are a changing in the WWE. We’ve been quick to call a tag team renaissance too early in recent years but the New Day just might be the team to really kick start a movement in the WWE where being the tag team champions is a big deal and something to be proud of. For now, just keep doing what you do New Day, because New..Day Rocks!

What do you think of the New Day and the tag division as a whole? Are you the lone Los Matadores fan? Tweet me all about it @webbanderson2 or send me an email [email protected] if you need to really let me have it. I promise you won’t hurt my feelings. Thanks for reading.

Guest Column: Examining What it Takes to Be That Next Level Superstar in WWE