Welcome back TJR readers! Did you spend all day Monday trying to think of a good opening joke for your Hall of Fame speech, and missed WWE Smackdown? Perhaps you spent all day Monday sleeping after a long weekend of wrestling and missed Raw.

For the first time since July, Elias returned to Raw. A clean-shaven and Elias wearing wrestling trunks and boots came out to interrupt Kevin Owens this past Monday on Raw. Elias then told Owens that he was actually not Elias but his younger brother Ezekiel. Owens began to argue with Ezekiel, before just walking away to end the segment. We shall have to wait and see if Ezekiel catches on with the fans, or if we will be walking with him all the way to AEW. (TJRWrestling)

Hey guys, since Elias is gone, I’ll be taking over his Twitter, I’m his younger brother – Ezekiel! https://t.co/PDXVlioGMR

It appears that a new faction is heading to Raw. This past Sunday at WrestleMania 38, Damian Priest helped Edge defeat AJ Styles. After the match, Priest joined Edge in the ring before the two of them left together. The following night on Raw, Priest and Edge did a promo segment in the ring. Priest stated that he has chosen to pledge his loyalty to Edge before the two were interrupted by Styles. Priest and Edge then proceeded to attack Styles, until WWE officials broke it up. It is rumored that more wrestlers will be joining Edge, with Rhea Ripley and Tommaso Ciampa rumored for the group. WWE may have wanted Edge’s old friends Brian Meyers, Matt Cardona and Christian for the group, but they are way too busy playing with toys and managing dinosaurs now. 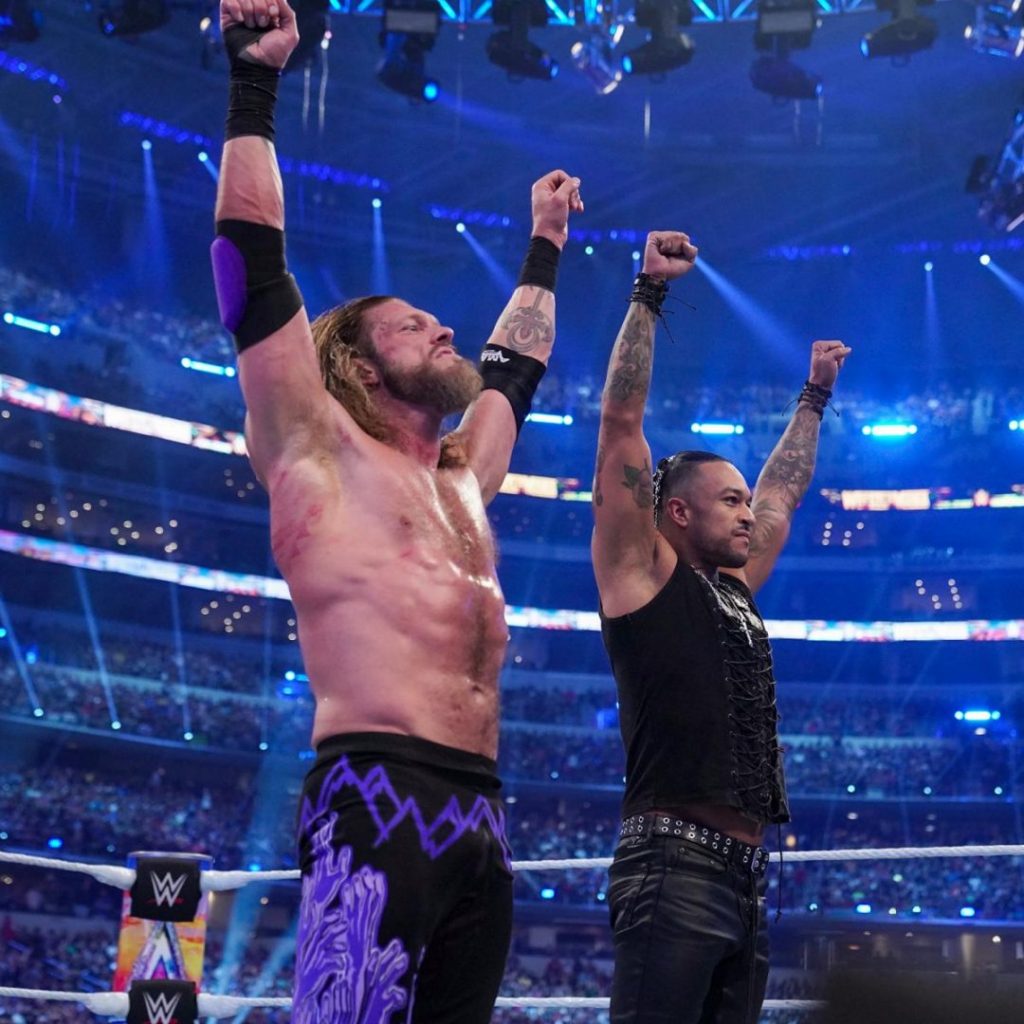 8. Three Title Matches Announced for Next Week for AEW

Next week promises to be a very busy one for AEW. Next Wednesday, April 13th on Dynamite, Jurassic Express will defend their AEW Tag Team Championships against reDRagon. Then on a special live edition of AEW Rampage on April 15th, AEW World Champion “Hangman” Adam Page will defend his title against Adam Cole in a Texas Death Match. Finally, at Battle of The Belts 2 on April 16th, Thunder Rosa will defend the AEW Women’s Championship against Nyla Rose. Personally, I had my own Battle of the Belts during the pandemic, with me eventually having to get a bigger one. (TJRWrestling) 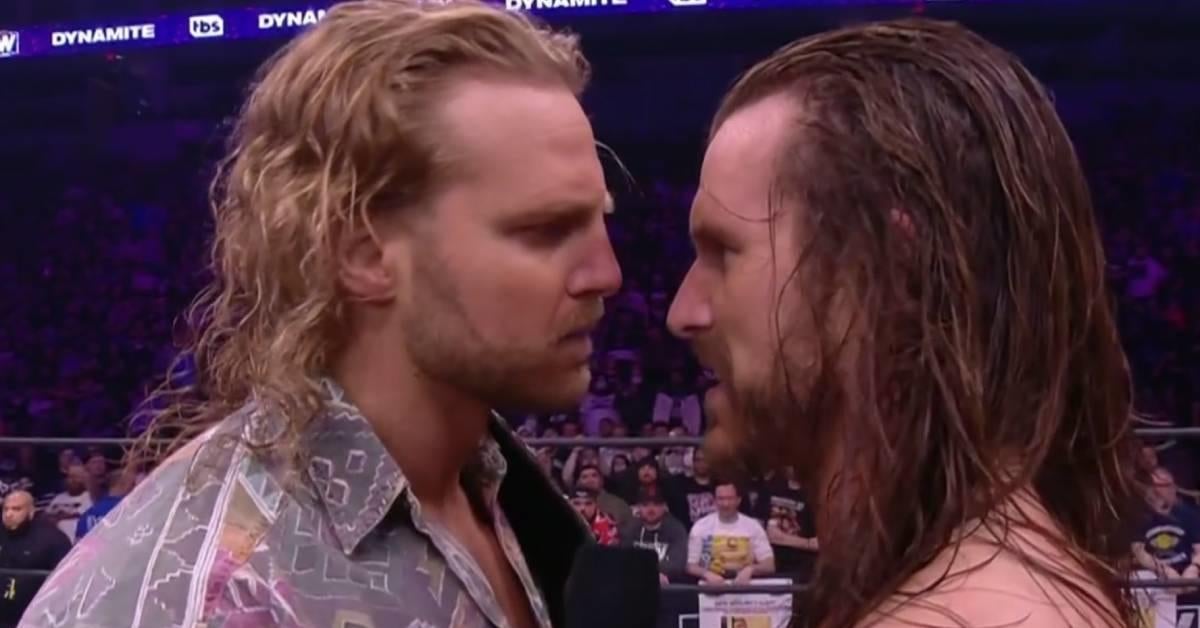 It did not take long for the team of Sasha Banks and Naomi to find success in the WWE. This past Sunday at WrestleMania Night Two, Banks and Naomi defeated Carmella and Queen Zelina, Liv Morgan and Rhea Ripley, and Natalya and Shayna Baszler in a Fatal 4-Way tag team match to win the WWE Women’s Tag Team Championships. This is actually Banks’ third time with the tag titles, as she held it twice with Bayley as well. Naomi on the other hand has never captured the tag titles with any of her previous partners, but she was “on a roll” for a little while.

Several new champions were crowned at NXT Stand and Deliver this past Saturday. Raquel Gonzalez and Dakota Kai defeated Toxic Attraction’s Gigi Dolin and Jacy Jayne to capture the NXT Women’s Tag Team Championships. Gonzalez and Kai’s title reign was short-lived however, as they lost the titles back to Dolin and Jayne on NXT this past Tuesday. Cameron Grimes was able to defeat Carmelo Hayes, Grayson Waller, Sola Sikoa and Santos Escobar in a ladder match to capture the NXT North American Championship. Also, MSK defeated both Imperium and The Creed Brothers to win the NXT Tag Team Championships. Nash Carter of MSK could not celebrate the victory for long, however, as he was released a few days later due to abuse allegations. One title that did not change hands however at Stand and Deliver was the NXT World Championship, where Dolph Ziggler surprisingly defended his title against Bron Breakker. Ziggler did not hold onto the title for much longer, however, as he ended up losing it back to Breakker on Raw. It is unknown why the NXT Championship was defended on Raw and not on NXT, but maybe Ziggler just really missed Raw’s catering. (TJRWrestling)

The first ROH show under Tony Khan ended with a shocking debut. This past Friday at ROH Super Card of Honor, Jonathan Gresham defeated Bandido to become the undisputed ROH World Champion. After the match, Gresham was attacked by Jay Lethal and Sonjay Dutt, until a debuting Samoa Joe made the save. Later, Tony Khan tweeted that it was official and Samoa Joe was All Elite. Joe then wrestled on Dynamite for the first time this past Wednesday, winning a qualifying match for the Owen Hart Tournament. It is unknown if Joe will wrestle primarily on ROH, AEW or follow the standard path and be on Dark in a month.

For the second year in a row, Bianca Belair has made history at WrestleMania. This past Saturday during Night One of WrestleMania 38, Belair was able to defeat Becky Lynch to capture the Raw Women’s Championship. Belair actually captured the Smackdown Women’s Championship at last year’s WrestleMania as well, before losing the title to Lynch at SummerSlam last August. Belair’s victory over Lynch did not come without consequences however, as she had a very noticeable swollen eye this past Monday on Raw. This should not be confused with the well-deserved shut eye that John Canton got after his long weekend.

3. Cody Rhodes Returns to the WWE

After weeks of rumors and speculation, Cody Rhodes has returned to WWE. This past Saturday at WrestleMania 38, Rhodes was introduced as the mystery opponent for Seth Rollins. Rhodes debuted with his “American Nightmare” persona, including even his entrance music from AEW. Rhodes then would go on to defeat Rollins in an excellent match. Rhodes also kicked off Raw this past Monday, giving a promo in the ring. Cody announced that he has signed a multi-year deal with WWE, and that his goal is to be the first in his family to capture the WWE Championship. On a related note, once Rhodes returned to WWE, Dave Meltzer immediately erased two stars from all his AEW matches. (TJRWrestling)

WrestleMania 38 decided to party like it was 1999 this past weekend. Night One’s main event saw Stone Cold Steve Austin appearing as a guest on the Kevin Owens Show. To the excitement of the 70,000+ people in attendance, the talk show segment ended turning into Austin’s first official match in 19 years. After fighting throughout the arena, Austin ended up hitting the Stunner to get the win. The following night on Night Two, it was the 76-year-old Vince McMahon who decided to get back in the ring. After McMahon’s protege Austin Theory lost his match to Pat McAfee, McMahon went into the ring and challenged McAfee. After some shenanigans, McMahon ended up defeating McAfee in the match. Theory and McMahon then celebrated in the ring, until Stone Cold came out to the excitement of the crowd. Stone Cold then proceeded to stun Theory before giving McMahon the worst looking stunner in history. WWE was leaning heavily into nostalgia at WrestleMania this year, as they also had Mark Henry and Mae Young’s child make a cameo during the Sami Zayn and Johnny Knoxville match. (TJRWrestling)

Fans have no choice but to acknowledge Roman Reigns now. This past Sunday in the main event of Night Two of WrestleMania 38, Reigns defeated Brock Lesnar to unify the WWE Heavyweight Championship and WWE Universal Championship. With the win, Reigns continues his historic Universal Championship reign, which has now lasted almost 600 days. At this point, it is unclear who will finally dethrone Reigns, but after watching him take a stunner I can guarantee you it will not be Vince McMahon. (TJRWrestling)

OH MY GOD THIS IS AMAZING AND TERRIBLE AT THE SAME TIME LLLMMAAOOOOOO STONE COLD AND VINCE MCMAHON BACK TOGETHER #WrestleManiapic.twitter.com/KMuXsD9zaT

Of all @WWE.
Over the entire Universe.
One. Undisputed. Champion. #AcknowledgeMe#WrestleManiapic.twitter.com/gjboB9E4E8

That concludes another edition of The Top Ten Wrestling Stories of the Week. Thank you for taking the time to read this each week. Although I often joke, I have recently started refereeing with NYCW and respect more than ever what wrestlers do every week. I wrote an article all about it all right here. If you like what I do, despite my jokes being almost as bad as a Vince McMahon stunner, then follow me on Twitter @Fowlerwrestlin1.