Cody Rhodes made his return to World Wrestling Entertainment at WrestleMania 38 last night as the mystery opponent of Seth Rollins. Cody defeated Rollins in what many fans believed to be the best match of the show.

For the past two months, there has been a lot of speculation about Cody possibly returning “home” to WWE where he started his pro wrestling career in the mid-2000s (debuting on Raw in July 2007) and left the company in 2016 to pursue other opportunities.

In 2019, Cody was one of the founders of All Elite Wrestling and for three years he was an Executive Vice President of the company. Cody went on to win the TNT Title in AEW, but when his deal expired earlier this year, he put out a statement that he was leaving AEW.

During WrestleMania 38 Saturday last night, Seth Rollins was in the ring awaiting his mystery opponent. The lights went out at AT&T Stadium in Dallas and then Cody’s voice played in the building for the intro of his theme song “Kingdom” that he used in AEW. Cody rose from underneath the staging area and the fans cheered loudly as the former WWE Intercontinental and Tag Team Champion made his entrance for this match with Rollins. They went on to have a 21-minute match with Rhodes winning clean using the Cross Rhodes neckbreaker.

After his match, Cody spoke to The Ringer Wrestling Show about his decision leaving AEW to back to WWE saying it was the “easiest decision” he’s ever made.

“I’m so proud of AEW. I’m so proud of Matt, Nick, and Kenny, and I really want to see Tony move forward, no bad blood, in the best of ways and all the respect in the world, but the decision to come here was the easiest decision I ever made.”

“It was just time. That show is doing well. Wrestlers are getting paid that weren’t getting paid, and I had a small part in making that happen – maybe a big part, I don’t know, depends on who you ask – I’m so proud of it, but it’s one of those things, how much are you going to do for everybody else, until you say, ‘I want one for me.’ I felt like that tonight. I felt real good.”

EXCLUSIVE: @codyrhodes is back In @WWE and told @DavidShoemaker all about it immediately after his match with @WWERollins at #WrestleMania. @WWEhttps://t.co/pxIj2GhKFKpic.twitter.com/IaOhgiVL08

“One of the most special parts of it was Bruce (Prichard) and the Chairman himself [Vince McMahon] flew down to meet me. Had that meeting not led to anything, had it just been a conversation about ‘wrestling, sports entertainment, so fun,’ just a conversation on that, it would have been great closure on the last loop.”

“I left here on the worst of terms. I talked all the smack on earth, but none of it matter. It was just, ‘you went out and did it.’ I remember saying, ‘I have to be me. It has to be Kingdom. It has to be The American Nightmare.’”

“To hear Vince say, ‘Well, it’s not broke. That’s what we’re buying.’ Just vindication. It felt good. You spend all the time trying to prove the people wrong who doubted you and prove people right who were on board with you. In that moment, it was closure on the first loop and excitement for what’s next. It’s pretty clear what I came to do. Pretty clear. There is unfinished business. For my family, there is something we never got, and I want to be the one to get it.”

Cody went on to talk about the perception of him as well how he felt about some of WWE’s top executives like WWE President Nick Khan:

“Perception of me is all over the place. ‘He’s an egomaniac. He asked for all this money.’ It’s kind of fun to hear, but in reality, I grew up here. I was 20-years-old, I didn’t know what a contract was. I was 19 when I went to OVW. Now, it’s a different story. It’s not so much about, ‘this has to be this way,’ it was just more of, I was the Executive Vice President of AEW, one of the founding fathers.

“I wanted to make sure that leaving, it was with the utmost respect and not, I hope no one is lazy enough here, which no one is, to make AEW jokes or bingo hall references or anything like that. Nothing against them, it was just time for me to move on. I had wrestled everybody that I wanted to wrestle. I didn’t want to be a 15-time TNT Champion and hold the belt hostage.

“I wanted to move on to a different piece of leather. Nick Khan is another one, ‘perception is reality,’ everyone has these opinions on Nick Khan. That guy was the nicest guy I ever met in my life. The nicest guy. Bruce to come in, the Chairman himself. The courtship felt so good.” (H/t Fightful)

Wrestling is a love story

Cody was also interviewed by Variety where he revealed that he told Vince McMahon that he believes that he is the best wrestler in the world:

“I told Vince McMahon, Bruce Prichard and Nick Khan — this very small circle of individuals — I told them what I truly believe and it’s that I’m the best wrestler in the world. And to go further with it, I actually don’t think there’s a close second. But with that said, the opportunity now exists to prove it, and that’s what I’m most excited about.”

Since his WWE departure in 2016, Cody has changed a lot and spoke at length about that:

“It’s a completely different individual returning to the game. It’s a different brand. It’s someone who’s experienced all the wonders of independent wrestling, of travelling internationally, of being able to get on the ground with the fans that make this whole ship move.” 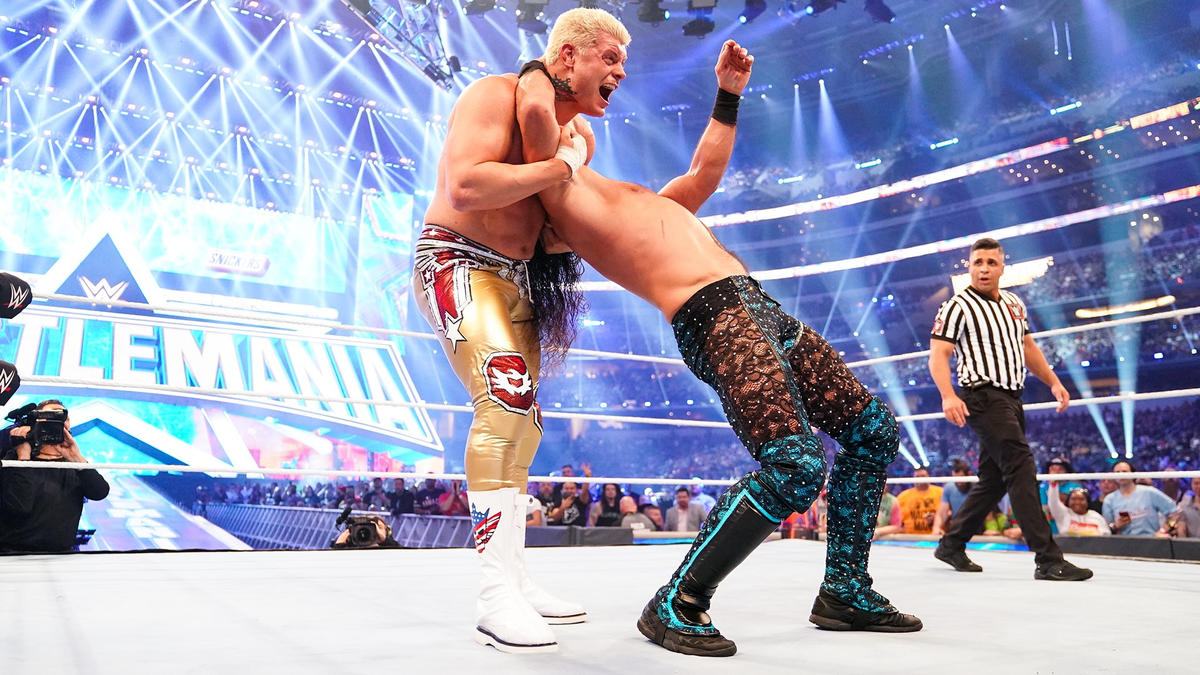 Cody also spoke openly about having the goal of becoming WWE Champion someday although he didn’t specifically mention that title:

“But different person or not, I’m still that little kid that I mentioned in an AEW promo that wants what my dad didn’t get, and I’m not going to say it out loud because I don’t want to jinx it.”

“But, you know, he went to Madison Square Garden, stood across from Superstar Billy Graham and he held it in his hands, the goal of mine, and it was taken away because that was the context of the match. I understand that now as an adult, but as a kid, that was the only reason I ever wanted to get in, so that I could get what he didn’t get.”

Cody’s next WWE appearance is likely coming this Monday on Raw where he will get a chance to talk more about his intentions in WWE.

Eric Bischoff Believes MJF Is One Of Wrestling’s Top Heels